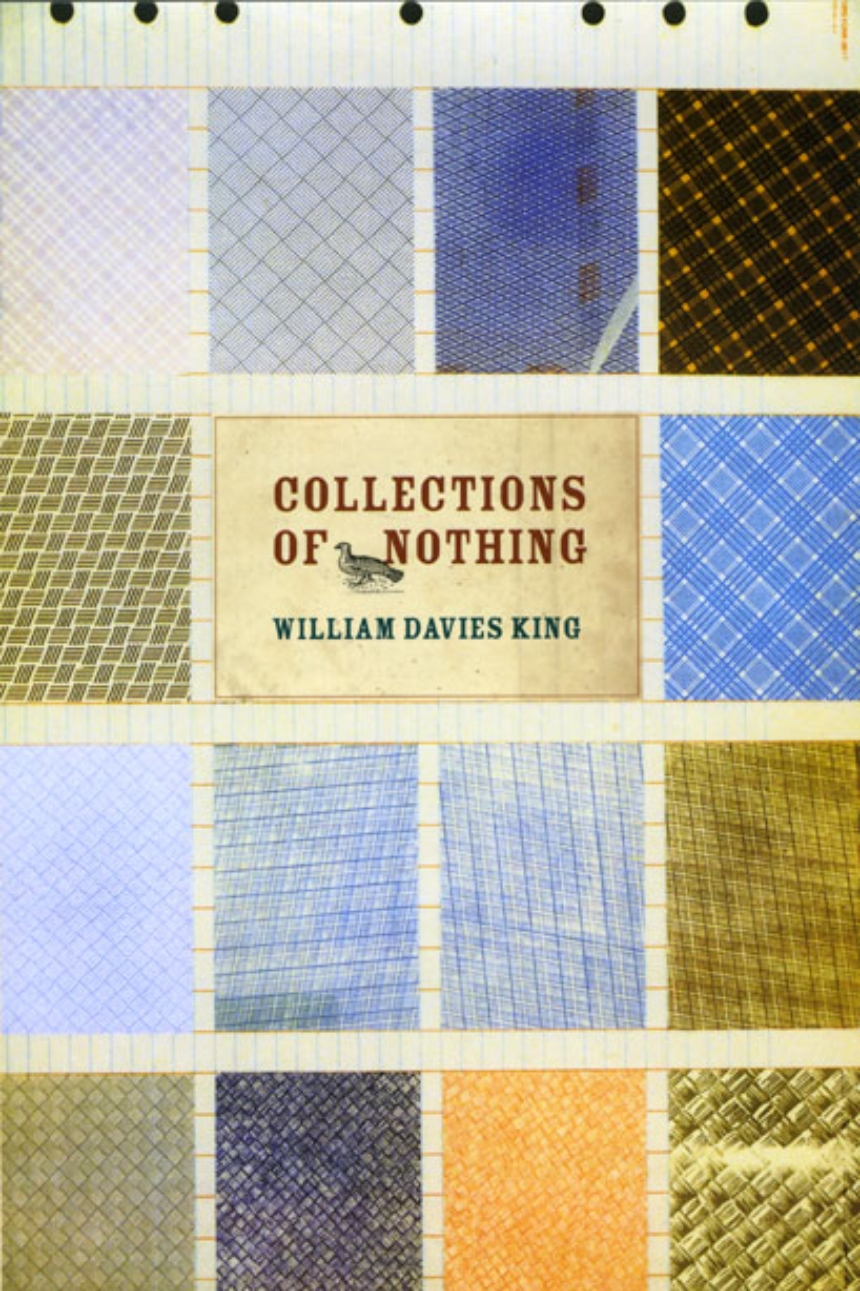 Nearly everyone collects something, even those who don’t think of themselves as collectors. William Davies King, on the other hand, has devoted decades to collecting nothing—and a lot of it. With Collections of Nothing, he takes a hard look at this habitual hoarding to see what truths it can reveal about the impulse to accumulate.

Part memoir, part reflection on the mania of acquisition, Collections of Nothing begins with the stamp collection that King was given as a boy. In the following years, rather than rarity or pedigree, he found himself searching out the lowly and the lost, the cast-off and the undesired: objects that, merely by gathering and retaining them, he could imbue with meaning, even value. As he relates the story of his burgeoning collections, King also offers a fascinating meditation on the human urge to collect. This wry, funny, even touching appreciation and dissection of the collector’s art as seen through the life of a most unusual specimen will appeal to anyone who has ever felt the unappeasable power of that acquisitive fever.

"What makes this book, bred of a midlife crisis, extraordinary is the way King weaves his autobiography into the account of his collection, deftly demonstrating that the two stories are essentially one. . . . His hard-won self-awareness gives his disclosures an intensity that will likely resonate with all readers, even those whose collections of nothing contain nothing at all."—New Yorker

"King’s extraordinary book is a memoir served up on the backs of all things he collects. . . . His story starts out sounding odd and singular—who is this guy?—but by the end, you recognize yourself in a lot of what he does."—Julia Keller, Chicago Tribune

Read an excerpt and an essay by the author.

“Collections of Nothing is a wonderful work of creative nonfiction, a memoir combined with a brilliant dissection of the psychological and consumerist motivations and contexts for collecting (and collecting and collecting) everyday objects. Compellingly self-aware and beautifully written, it marries a well-told analysis of personal, eccentric behavior and an intricate inteweave of larger theories about the drive to accumulate and possess. I thoroughly enjoyed it.”

Rosellen Brown, author of Before and After

“Collections of Nothing is a terrific book. Wonderful and touching, it is informed by a deep sense of emptiness at the heart of materialism that echoes behind the text. It is not an academic book or an argument, but rather a strange hybrid, oscillating between memoir and meditation on collecting. Collectors will understand and empathize with William Davies King, who speaks to and of them.”

"What makes this book, bred of a midlife crisis, extraordinary is the way King weaves his autobiography into the account of his collection, deftly demonstrating that the two stories are essentially one. . . . His hard-won self-awareness gives his disclosures an intensity that will likely resonate with all readers, even those whose collections of nothing contain nothing at all."

“Through a discussion of the objects he has collected, King portrays what it is to be human, to be confused, to be lonely, to make mistakes, and to try to fix them. At the core of his collecting is the thrill of finding something (or someone) to care about; how one’s impulse to label or contain it (or them) is a way of imposing order on the chaos of existence.”

“Part memoir and part disquisition on the psychological impulses behind the urge to accumulate, Collections of Nothing is a wonderfully frank and engaging look at one man’s detritus-fueled pathology. . . . King emerges by book’s end a flawed but truly lovable eccentric--an ‘antimonk, carefully preserving and sustaining a vital darkness, heavy with various glues, through a forbidding period of enlightenment.’ May this darkness reign.”

"This is one nice writer. . . . We have been treated to a fine and funny, charmingly written and deeply felt portrayal of the human heart. King’s is a masterful collection of the different kinds of longing that we know, his world one full of albums waiting to be pasted into, containers wanting something to contain."

"Collections of Nothing appears on its surface to be a quirky, diverting and playful essay (influenced by Brautigan, Tzara and Joyce), but its autobiographical aspects are anguished in places, and for all its jauntiness of style there can be no happy ending. It is, however, immaculately written and a real pleasure to read."

"...Collections of Nothing uses King's collections as a jumping-off point for an extended autobiographical essay... and it's psychological roots and relationship to life."