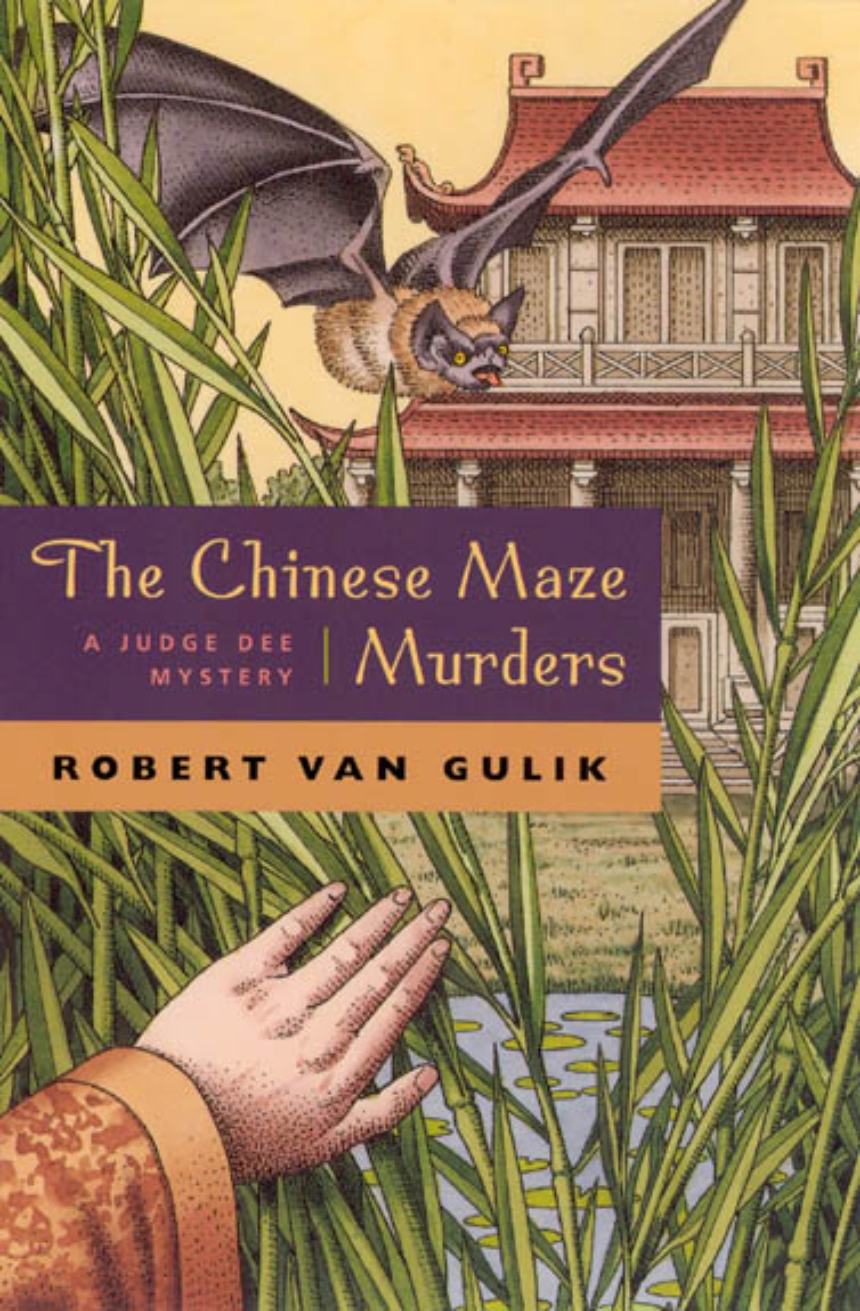 Poisoned plums, a cryptic scroll picture, passionate love letters, and a hidden murderer with a penchant for torturing and killing women lead Judge Dee to the heart of the Governor’s garden maze and the answers to three interwoven mysteries. The Chinese Maze Murders represents Robert van Gulik’s first venture into writing suspense novels after the success of Dee Gong An, his translation of an anonymous Chinese detective novel from the sixteenth century.

First Chapter
A strange meeting takes place on a lotus lake; Judge Dee is attacked on his way to Lan-fang

Second Chapter
Judge Dee opens the first session of the tribunal; He discovers in the archives an unsolved problem

Third Chapter
The judge witnesses a quarrel on the market; A young man forecasts his father’s murder

Fourth Chapter
Tao Gan reports on a mysterious old mansion; An ingenious trap is set in the dark tribunal

Fifth Chapter
Twenty ruffians attack in the dead of the night; Judge Dee sets out on a dangerous excursion

Sixth Chapter
Four guildmasters are received in the main hall; Mrs. Yoo visits the tribunal with an old picture

Eighth Chapter
An old General is murdered in his own library; Judge Dee goes to visit the scene of the crime

Ninth Chapter
Judge Dee ponders alone in a dead man’s room; The autopsy brings to light the cause of death

Tenth Chapter
Judge Dee pays a visit to an eccentric young man; He presides an artistic meeting in the tribunal

Eleventh Chapter
Tao Gan has an adventure in an old temple; Ma Joong meets his math in a drinking bout

Fourteenth Chapter
A strange clue is found in a dead man’s room; Judge Dee sends his men to arrest a criminal

Fifteenth Chapter
Painter Woo reveals his secret in the tribunal; Judge Dee orders a search of the Eastern city

Sixteenth Chapter
Ma Joong investigates the licensed quarter; He is made a partner in a nefarious scheme

Seventeenth Chapter
Mrs. Yoo pays a second visit to the tribunal; A queer discovery is made in an old mansion

Twentieth Chapter
A rebel chieftain confesses under torture; A mysterious stranger is at last identified

Twentyfirst Chapter
Judge Dee closes the case of the murdered General; Chiao Tai relates the story of a military disaster

Twentysecond Chapter
Judge Dee explains the murder of General Ding; He reveals the secret of the scroll picture

Twentythird Chapter
The judge leads his men to the heart of the maze; A gruesome discovery is made in a secret pavilion

Twentyfourth Chapter
A young girl goes to visit a famous artist; A criminal is caught in an unexpected place