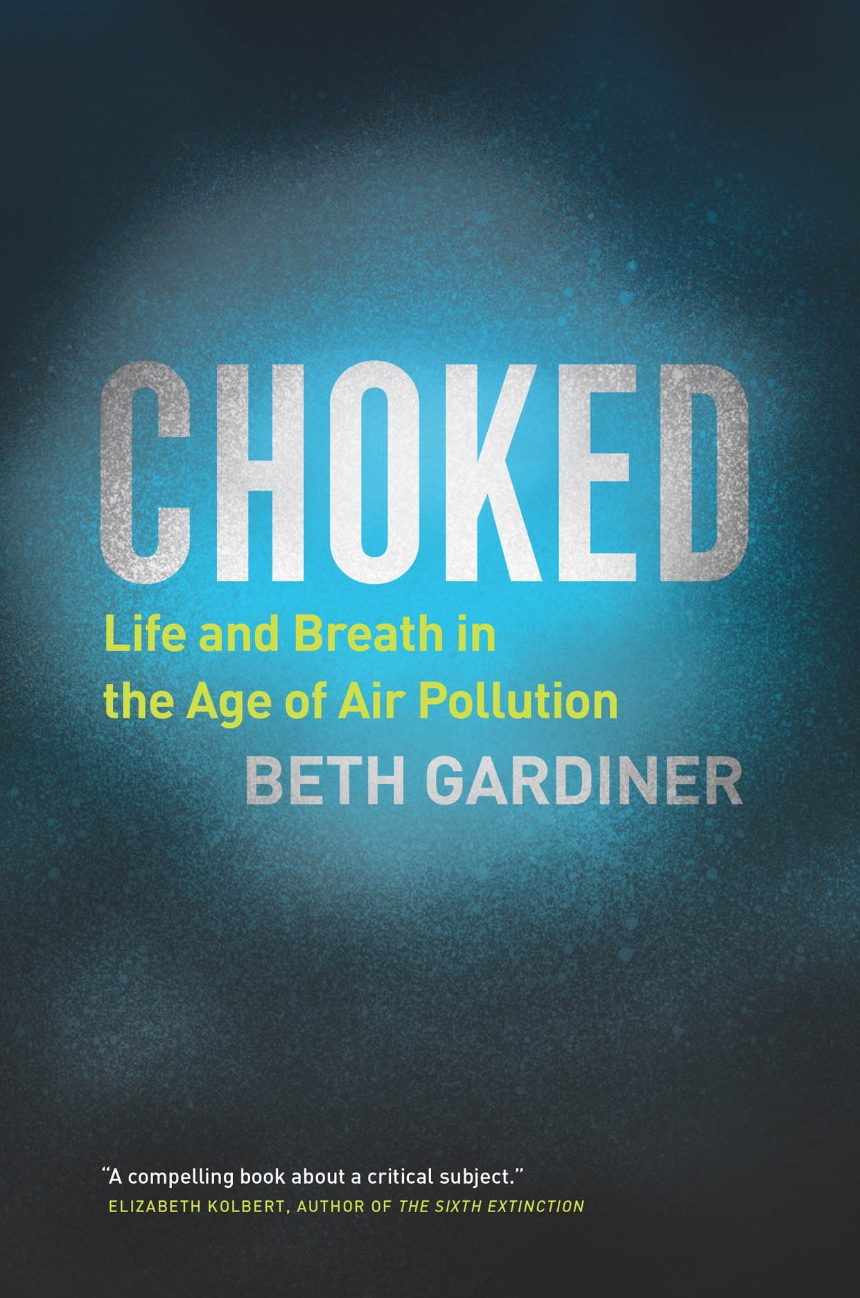 Life and Breath in the Age of Air Pollution

Life and Breath in the Age of Air Pollution

Nothing is as elemental, as essential to human life, as the air we breathe. Yet around the world, in rich countries and poor ones, it is quietly poisoning us.

Air pollution prematurely kills seven million people every year, including more than one hundred thousand Americans. It is strongly linked to strokes, heart attacks, many kinds of cancer, dementia, and premature birth, among other ailments. In Choked, Beth Gardiner travels the world to tell the story of this modern-day plague, taking readers from the halls of power in Washington and the diesel-fogged London streets she walks with her daughter to Poland’s coal heartland and India’s gasping capital. In a gripping narrative that’s alive with powerful voices and personalities, she exposes the political decisions and economic forces that have kept so many of us breathing dirty air. This is a moving, up-close look at the human toll, where we meet the scientists who have transformed our understanding of pollution’s effects on the body and the ordinary people fighting for a cleaner future.
In the United States, air is far cleaner than it once was. But progress has failed to keep up with the science, which tells us that even today’s lower pollution levels are doing real damage. And as the Trump administration rips up the regulations that have brought us where we are, decades of gains are now at risk. Elsewhere, the problem is far worse, and choking nations like China are scrambling to replicate the achievements of an American agency—the EPA—that until recently was the envy of the world.
Clean air feels like a birthright. But it can disappear in a puff of smoke if the rules that protect it are unraveled. At home and around the world, it’s never been more important to understand how progress happened and what dangers might still be in store. Choked shows us that we hold the power to build a cleaner, healthier future: one in which breathing, life’s most basic function, no longer carries a hidden danger.

“Some seven million people will die prematurely this year owing to the effects of air pollution. Gardiner travels to some of the smoggiest places on earth to explore this grim statistic and explain what can be done to alter it. Choked is a compelling book about a critical subject.”

"Gardiner’s powerful account of what the air we breathe is doing to our bodies couldn’t be more timely. Choked tells a gripping, complex tale full of memorable characters—starring one of the deadliest villains of all time, air pollution. It illuminates some disturbing realities, but it also gives us hope by showing us what we can do to clean our air. This is an urgent, essential read."

“Moving. . . . By putting a human face on a problem of environmental chemistry, Gardiner shows us the devastation up close, creating a sense of dismay but also urgency to improve lives.”

“Gardiner is nuanced but sharp in her judgments. She is concerned with the particularities of real lives as well as the particulates that often blight them. You couldn’t ask for a better guide for nonspecialists and concerned citizens.”

Guardian, Book of the Week

"Gardiner's Choked is such an important book. Its power is drawn from the author's ability to pull focus between headline issues and individual stories, describing the impacts of pollution at scales both public and personal."

"Remarkable. . . . An important book. I recommend it to all who care about the air they breathe."

"Pollution-laden air is 'quietly poisoning us,' Gardiner writes in her arresting account of one of the biggest environmental threats to human health, one that claims seven million premature deaths a year worldwide. . . . She lays out solutions . . .  although she is clear-eyed about potential hurdles and the recent push to undo critical safeguards."

“Choked is an extraordinary history of the air we breathe. Brilliantly reported and beautifully written, it takes us on a global tour that illuminates what's at stake when we fail to prioritize people’s—and the planet’s—health. Gardiner sheds myths, wrestles with moral complexity, and reveals the social injustices that make air pollution a danger that both connects and divides us. Along the way, her candid interviews sketch an inspiring blueprint for how to move forward in one of our most elemental battles.”

"The stories Gardiner tells in Choked paint a compelling picture of a critical issue. Air pollution blights too many lives. Choked weaves together science, politics, and economics to show us the progress we’ve made toward healthier air and the work that still lies ahead.”

"At a time when we urgently need environmental policies that safeguard the health and well-being of all, Choked illuminates the political and technological battles and victories that have determined what is in the air we breathe. Written with the profound wonder that defines the most engaging scientific narratives and with the deep concern that comes from being a parent, this book is a personal journey to the heart of one of our planet’s most pressing problems.”

"With gripping stories and a keen understanding of science, Gardiner traces air pollution’s insidious impact on our bodies. Choked is chock full of frightening tales from places such as Krakow, London, Delhi, and California's San Joaquin Valley. Yet you’ll come away breathing a little easier, knowing that with the right choices we have the tools to make the world a healthier place for our children and grandchildren."

“A brilliantly crafted, readable anatomy of an insidious but powerful threat—air pollution. Choked exposes the trade-offs and abuses that have left us breathing unhealthy air and also offers moving portraits of the clean air champions who are fighting back.”

Kate Winkler Dawson, author of Death in the Air

"Air pollution is a worldwide problem that we cannot ignore. Ranging from China, India, USA, and the UK, this book provides a readable and informative survey of the dangerously poor quality of the air we all breathe.”

"Weaving her curiosity as an investigative journalist with the concern of a parent (and human), accomplished journalist Beth Gardiner’s debut book Choked is an eminently readable exploration of air pollution across the globe. Taking her investigative skills from Delhi to Poland to LA and beyond, she brings back stories about how we are fundamentally fouling—and can save—that most essential element: the air we breathe.”

“Choked literally breathes life into the struggle for clean air in the US and across the world. Gardiner is a masterful storyteller who makes the science understandable and introduces us to the scientists and policymakers who uncovered the dangers of air pollution and drove solutions that have saved millions of lives. This book doesn’t just make air pollution personal, it brings hope to all of us who remain in the fight for cleaner air and a stable climate.”

Gina McCarthy, former director of the US Environmental Protection Agency

"This important book tells so many touching stories from bold voices from all over the world, each making it clear that we can no longer accept air pollution and the devastation it causes, especially when the solutions are so close at hand. Clean air is a human right and every breath matters."

“Choked is a deeply reported and powerfully written account of an invisible global health crisis. Gardiner takes us on an eye-opening journey that packs an emotional punch, but also offers valuable lessons from scientists, politicians, and ordinary people fighting for cleaner air.”

“With Choked, Gardiner renders the oft-invisible assault of air pollution on our lungs and cities not just visible but gripping. Whether describing the people she meets in her search to understand the problem and its solutions or discussing the science, politics, and social issues surrounding dirty air, Gardiner is a deft reporter and a vivid storyteller. Choked should be required reading for anyone breathing today.”

Carla Power, author of Pulitzer Prize finalist If the Oceans Were Ink

“What are we doing to our lungs by burning fossil fuels? That's the profound question that this engaging book answers, traveling the world from Los Angeles to London, Beijing to Berlin. Air pollution is an insidious and often invisible threat, which makes it easy to overlook. But you will learn just how dangerous dirty air really is—and what we can do to clean it up—in this illuminating tale.”

"Choked is a timely and potent look at the health threat air pollution poses around the world. The book’s focus on life’s most basic function—breathing—makes dirty air’s dangers both tangible and immediate. Gardiner has turned the fight for clean, healthy air into a compelling tale of the progress we’ve made and the work that still lies ahead.”

“Choked is a vital book, both deeply reported and emotionally powerful. Gardiner tells a sweeping, global story that also hits close to home, making the threat dirty air poses to every one of us frighteningly clear. As engaging as it is important, this book is a must read for anyone hoping for a healthier future.”

"...Gardiner has issued a powerful, rational, wake-up call regarding the worldwide 'plague of dirty air.'"

"Although air pollution might seem like a daunting, insurmountable issue, Gardiner wants us to know that it’s a fixable problem—and one that must be tackled with smart, science-based policy."

Prologue
Inhale: The Meaning of a Breath

1
The Measure of a Lung: Charting Pollution’s Power

4
Air You Can Chew: Poland and the Price of Coal

Part 2 Coming Up for Air
7
To Change a Nation: The Story of America’s Clean Air Act

8
Reluctant Innovators: Air and the Automakers

10
Live from the “Airpocalypse”: China’s Next Revolution

11
“To Whom Belongs the City?”: Berlin Looks Beyond Cars

Epilogue
Exhale: What Comes Next