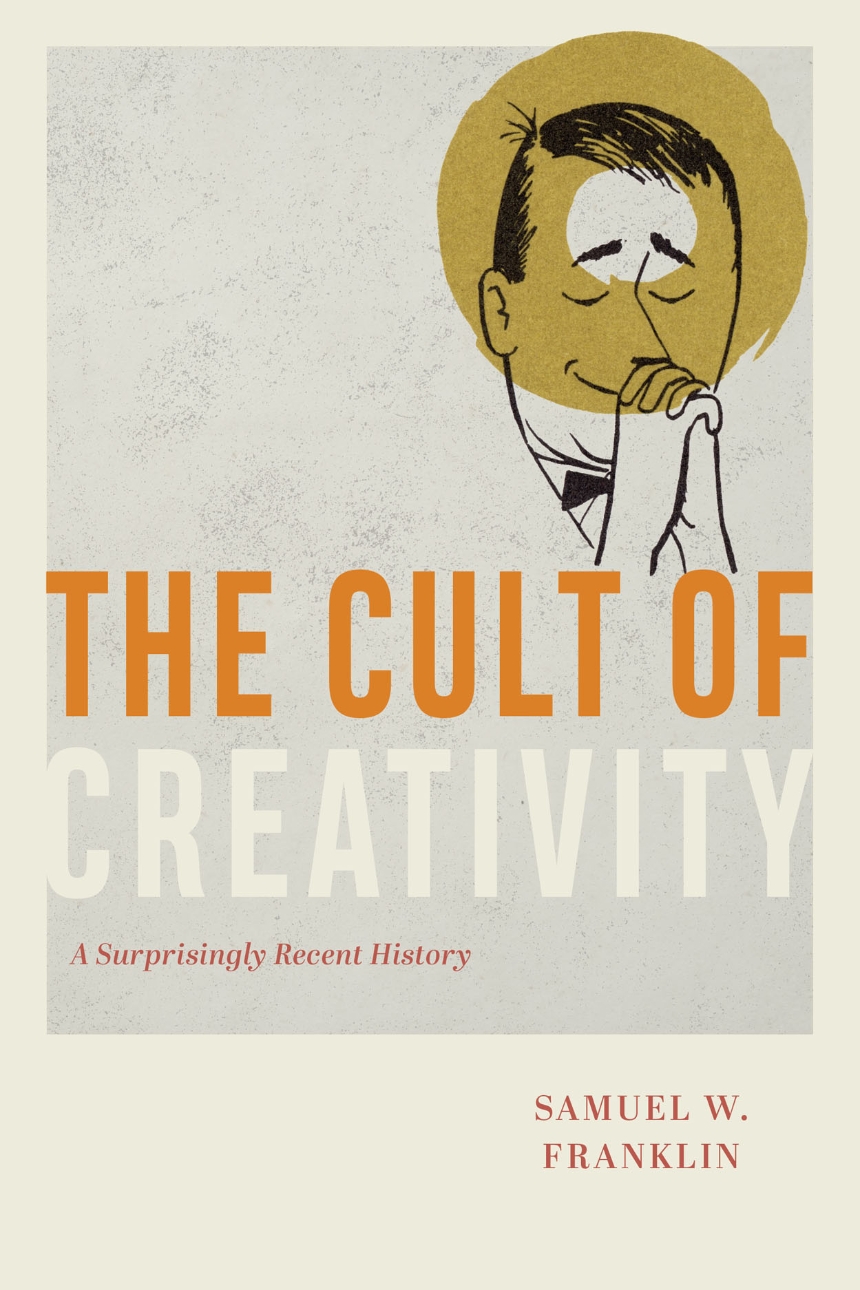 The Cult of Creativity

The Cult of Creativity

A history of how, in the mid-twentieth century, we came to believe in the concept of creativity.

Creativity is one of American society’s signature values. Schools claim to foster it, businesses say they thrive on it, and countless cities say it’s what makes them unique. But the idea that there is such a thing as “creativity”—and that it can be cultivated—is surprisingly recent, entering our everyday speech in the 1950s. As Samuel Weil Franklin reveals, postwar Americans created creativity, through campaigns to define and harness the power of the individual to meet the demands of American capitalism and life under the Cold War. Creativity was championed by a cluster of professionals—psychologists, engineers, and advertising people—as a cure for the conformity and alienation they feared was stifling American ingenuity. It was touted as a force of individualism and the human spirit, a new middle-class aspiration that suited the needs of corporate America and the spirit of anticommunism.

Amid increasingly rigid systems, creativity took on an air of romance; it was a more democratic quality than genius, but more rarified than mere intelligence. The term eluded clear definition, allowing all sorts of people and institutions to claim it as a solution to their problems, from corporate dullness to urban decline. Today, when creativity is constantly sought after, quantified, and maximized, Franklin’s eye-opening history of the concept helps us to see what it really is, and whom it really serves.

“The Cult of Creativity is a beautifully written and well-documented account of how creativity gained the societal value it has today. Franklin reveals the powerful social construction at work behind the meaning of creativity and reminds us that such ideas have historical roots, as well as a more sinister side that should concern us all. Through engaging storylines, he builds a complex picture that is captivating to discover, piece by piece.”

Vlad Glaveanu, author of Wonder: The Extraordinary Power of an Ordinary Experience

“Celebrated and sought-after, ‘creativity’ is often presented as the magic yet ineffable elixir for fame and fortune by today’s artists, technologists, and business leaders. And yet—until Samuel Franklin’s marvelous new book—it has been little studied as a historical phenomenon. The Cult of Creativity examines how, after World War II, a fascinating ensemble of psychologists, advertising executives, and other assorted gurus attempted to explain and quantify human ingenuity. The result is an insightful and delightful exploration into how we think about technology, capitalism, and consumerism.”

“The Cult of Creativity presents an exceptionally lucid look at the various ideas, doctrines, and programs behind the concept of creativity. Through keen analysis, Franklin brings together scholarship from a range of sources to frame this powerful social and cultural critique.”

Introduction
1 Between the Commonplace and the Sublime
2 The Birth of Brainstorming
3 Creativity as Self-Actualization
4 Synectics at the Shoe
5 The Creative Child
6 Revolution on Madison Avenue
7 Creativity Is Dead . . .
8 From Progress to Creativity
9 Long Live Creativity
Conclusion: What Is to Be Done?
Acknowledgments
Notes
Index
Excerpt

By the time I reached adulthood I was pretty sure I was creative, and I considered this a good thing. I grew up in the 1980s in a milieu in which creativity was encouraged. My parents signed me up for pottery and music lessons and something called Odyssey of the Mind, where kids competed against students from other schools in skits and in quickly listing responses to prompts such as “unusual uses for a red brick.” Though I only realized it later, being creative became an implicit part of my identity, and it seemed to fit. I doodled in class. When assigned an essay, I built a diorama instead. I took up the saxophone and played in bands, which made me creative almost by definition. Being creative even seemed to impart a positive spin on my less attractive attributes. Disruptive in class? Bad at math? Bad at sports and maybe a tad fey? Creative.
Lucky for me, by the time I graduated college the conventional wisdom among those who loved to reject conventional wisdom was not only that being creative was a good thing, but that creative people were going to inherit the earth. (...) In this “weightless” and “increasingly complex world,” the creatives, long confined to garrets and bohemian cafes, would finally take their places as the leaders of a bright new future. The MFA was the new MBA.

These turn-of-the-millennium prophesies soon became dogma. From its new nexus in Silicon Valley, corporate America introduced flex hours, free lunch, and Ping-Pong tables, supposedly to cater to the peripatetic workings of the creative process. Cities competed to attract creative workers, promising funky cultural amenities like live music and live/work studio apartments. Casually dressed and increasingly tattooed architects, designers, and musicians began to populate our advertisements and other aspirational media. In 2010, a poll of 1,500 CEOs ranked creativity as “the most important leadership quality for success in business,” beating out such virtues as integrity and global thinking. The Partnership for 21st Century Skills, a committee representing the National Education Association, the Department of Education, and a handful of top tech companies including Apple, Microsoft, and Cisco, listed creativity as one of the “4 Cs” along with Communication, Collaboration, and Critical Thinking. And in 2020 the World Economic Forum declared creativity “the one skill that will future-proof you for the jobs market.” We apparently already knew that: back in 2011, “creative” was already the most common adjective job applicants used to describe themselves on LinkedIn.
(...)
Even so, creativity is much more than just a personal or a professional good. It’s also said to be the thing that’s going to save the world. “It is only with creativity that we can hope to address the myriad problems facing our schools and medical facilities, our cities and towns, our economy, our nation, and the world,” write two preeminent psychologists; “creativity is one of the key factors that drive civilization forward.” Perhaps the best articulation of how we feel about creativity comes from the slogan of a 2018 Adidas ad campaign featuring the likes of the soccer superstar Lionel Messi and the music producer Pharrell Williams: “Creativity Is the Answer.” What creativity is the answer to is left tantalizingly vague, but the implication is everything— from outwitting a defenseman to producing a new banger to the biggest of social problems.

All of these claims about creativity— that it is a cure- all for business, self, humanity, the planet— can feel irrefutable, unobjectionable, even self-evident. But also, when taken together, a bit grandiose, and confusing. Were Picasso, Einstein, Gandhi, Steve Jobs, and ten- year- old me coming up with strange uses for a brick really all running on the same stuff ? Will learning to dance actually help kids thrive in the maelstrom of late capitalism? How can creativity be both a sacred and inalienable personal experience and an engine of economic growth? If creativity is really what it takes to make it these days, and everyone is at least potentially creative, how come inequality is compounding along the same old lines of race and class? And considering how many of our modern problems come from having too much new stuff too quickly, what reason do we have to believe that we lack creativity in the first place, or that encouraging more of it will solve any of those problems?

Such questions inevitably lead us to the conclusion that creativity is quite a fuzzy concept. Sometimes it is treated as a learnable skill, other times as an innate personality trait. In some cases it refers specifically to the arts or the “creative” side of business, such as design and marketing, while in others it extends to every corner of society. It can invoke the masterworks of great geniuses as well as the everyday doings of third-graders. And most confusing of all, these sometimes contrary meanings are often found side by side within any given text.

This book is about how we came to believe in creativity— in the sense that we tend to think it is the answer to nearly all our problems, and in the sense that we believe in the phenomenon of something called creativity to begin with. This is not a book about how creativity works or how to be more creative. Nor is it a survey of how we’ve thought about art and invention and the like through the long sweep of history.15 Instead, it is a history of how and why in the United States after World War II something called creativity became a topic, an object of academic study and debate, an official personality trait, a goal of educational and economic policy, an ideal of personal transformation. You could say it’s about how creativity became, in more than one sense, a thing.