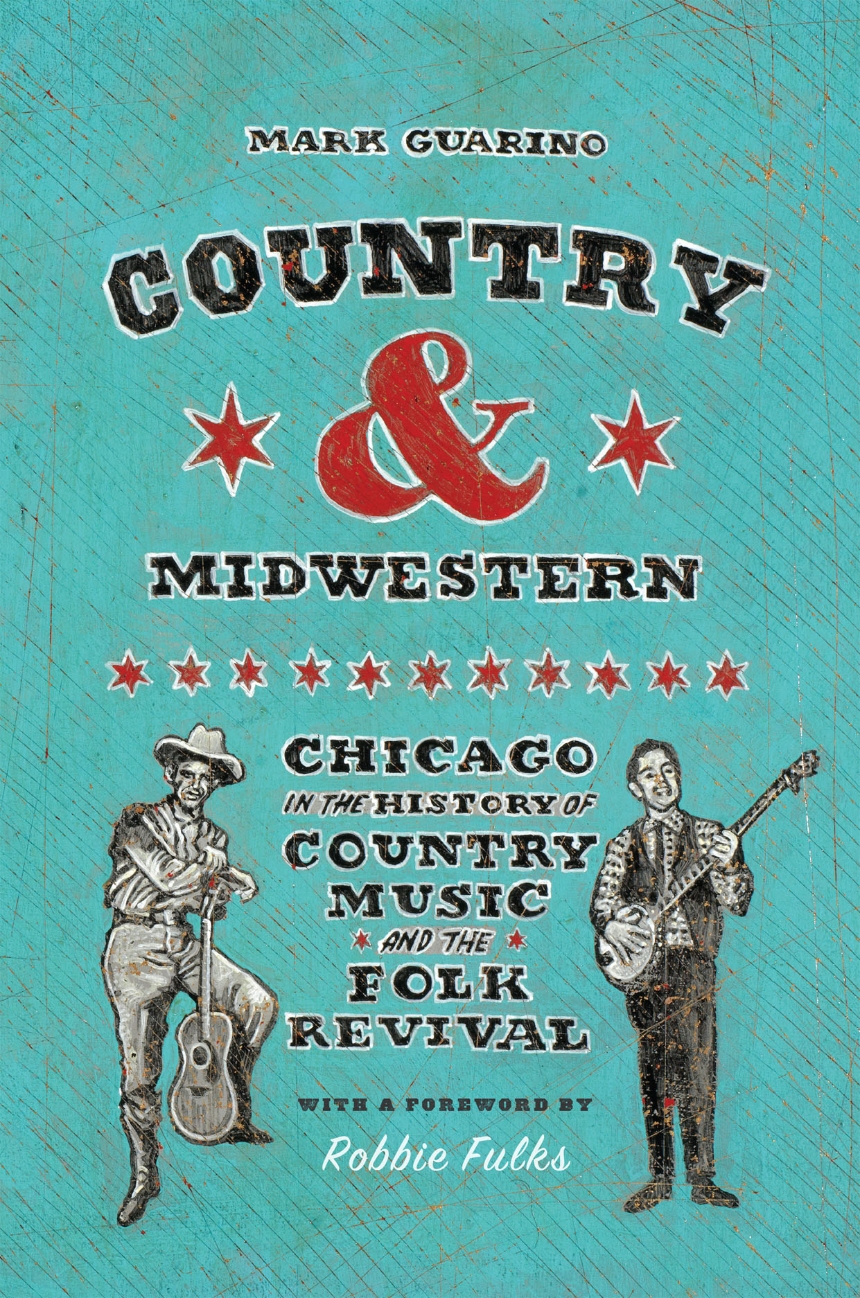 Chicago in the History of Country Music and the Folk Revival

Chicago in the History of Country Music and the Folk Revival

With a Foreword by Robbie Fulks
The untold story of Chicago’s pivotal role as a country and folk music capital.

Chicago is revered as a musical breeding ground, having launched major figures like blues legend Muddy Waters, gospel soul icon Mavis Staples, hip-hop firebrand Kanye West, and the jazz-rock band that shares its name with the city. Far less known, however, is the vital role Chicago played in the rise of prewar country music, the folk revival of the 1950s and 1960s, and the contemporary offspring of those scenes.

In Country and Midwestern, veteran journalist Mark Guarino tells the epic century-long story of Chicago’s influence on sounds typically associated with regions further south. Drawing on hundreds of interviews and deep archival research, Guarino tells a forgotten story of music, migration, and the ways that rural culture infiltrated urban communities through the radio, the automobile, and the railroad. The Midwest’s biggest city was the place where rural transplants could reinvent themselves and shape their music for the new commercial possibilities the city offered. Years before Nashville emerged as the commercial and spiritual center of country music, major record labels made Chicago their home and recorded legendary figures like Bill Monroe, The Carter Family, and Gene Autry. The National Barn Dance—broadcast from the city’s South Loop starting in 1924—flourished for two decades as the premier country radio show before the Grand Ole Opry. Guarino chronicles the makeshift niche scenes like “Hillbilly Heaven” in Uptown, where thousands of relocated Southerners created their own hardscrabble honky-tonk subculture, as well as the 1960s rise of the Old Town School of Folk Music, which eventually brought national attention to local luminaries like John Prine and Steve Goodman. The story continues through the end of the twentieth century and into the present day, where artists like Jon Langford, The Handsome Family, and Wilco meld contemporary experimentation with country traditions.

Featuring a foreword from Grammy-nominated songwriter Robbie Fulks and casting a cross-genre net that stretches from Bob Dylan to punk rock, Country and Midwestern rediscovers a history as sprawling as the Windy City—celebrating the creative spirit that modernized American folk idioms, the colorful characters who took them into new terrain, and the music itself, which is still kicking down doors even today.

“Guarino’s magnificent Country and Midwestern proves that the Second City was first among equals in the development of American roots music. A ruthless researcher and scintillating storyteller, Guarino provides critical context and moving portraits of the pickers, grinners and pioneers who shaped Chicago’s contributions to country and folk. A long overdue but welcome volume that will sit alongside other essential works on the subject, from Bill C. Malone’s Country Music USA to David Hadju’s Positively Fourth Street.”

Bob Mehr, author of Trouble Boys: The True Story of the Replacements

"Long before Nashville’s emergence as the country music capital, Chicago held sway with the nationally-broadcast Barn Dance and a row of honky-tonk venues on Madison Street. Guarino masterfully connects the dots between that star-making era to a contemporary scene devoted to insurgent country. This is a definitive and long-overdue look at a vital, if underappreciated, thread in how so-called hillbilly music evolved and flourished in a seemingly incongruous setting: the hard streets of Chicago."

Greg Kot, cohost of Sound Opinions and author of I'll Take You There: Mavis Staples, the Staple Singers, and the Music That Shaped the Civil Rights Era

"Those of us who came of age in the vicinity of Chicago understand its importance to country and folk music. The Windy City is home to some of the most prolific artists in the genre: John Prine, Wilco, Mavis Staples, Jon Langford and Robbie Fulks. Chicago gave us the WLS Barn Dance, the Old Town School of Folk Music, the Hyde Park Folk Festival, Flying Fish and Bloodshot Records. Some of us were lucky enough to make our own personal discoveries of the music that sustains us at clubs Gate of Horn, Earl of Old Town, the Hideout, and Whiskey River. Now, finally, author Mark Guarino chronicles the history of country and folk music in Chicago in his necessary and irresistible book Country and Midwestern."

Tamara Saviano, author of Without Getting Killed or Caught: The Life and Music of Guy Clark

"In this remarkable and thrilling book, Guarino writes that 'Chicago’s role in country music and the folk revival has never earned a closer look.' Well, it gets that now in a book exhaustively researched, stylishly written and exciting on every single page. In it I find people I knew well (even my father), many more that I heard play and sing in clubs, and some that are new to me. They are all here, vividly, the rogues, rascals and geniuses who made and keep making our city sing."

In 1947, country music was a genre without a proper name. In the twenties and thirties, you could hear it on barn dance radio shows on stations from coast to coast. Early record labels tended to categorize the music in the simplest terms: “singing with guitar and autoharp” for the Carter Family; “singing with yodeling and guitar” for Jimmie Rodgers. By the late thirties, anything that wasn’t a jazz orchestra or a race record—blues, jazz, or gospel music marketed to Black record buyers—earned a derogatory term that reflected what New Yorkers in the recording industry thought of its rural White market: hillbilly music.

The recording industry marginalized hillbilly music to protect the thing it was built to promote: the pop music of New York’s Tin Pan Alley. Even though country music was quickly evolving from solo fiddlers to the blues yodeling of Jimmie Rodgers to the loud and fast rhythms of honky-tonk, the genre lacked the prestige of Irving Berlin, George Gershwin, Cole Porter, or George M. Cohan.

That bothered Ernest Tubb, a Texas singer and bandleader who by 1947 was already as big as you could get as a hillbilly. He had played starring roles in Hollywood features, and his jukebox hit “There’s a Little Bit of Everything in Texas” had sold over two hundred thousand copies. That gave him the clout to approach Dave Kapp, president of the hillbilly division of Decca Records, and tell him the catalog needed a refresh, starting with the name “hillbilly.” “What would you call it?” Kapp asked. Tubb had the most practical of answers: “Well, I don’t know, but most of us are from the country originally—call it country music.” Kapp thought it over. Tubb was right, in a general sense. But another of Decca’s hillbilly star acts was the Sons of the Pioneers, a group it placed in the subgenre “cowboy music.” The Sons of the Pioneers sang of sleeping beneath open skies in ranch country far beyond the Mississippi River. “We couldn’t call them ‘country music,’” Kapp told his star. Tubb had an answer for that too. “Well, what about ‘Western’? ‘Country and Western’?” Kapp agreed, and Decca’s Summer 1948 catalog announced a complete listing of country and western records, with pages of subgenres aimed at rural customers, both White and Black: “Ballads, Blues, Folk Songs, Spirituals, Country Tunes, Gospel Songs.” Tubb, Red Foley, and Jimmie Davis—the label’s biggest stars—were now prominently pictured under a new title that affirmed their dignity and artistry: “Country Artists.”

Kapp was a record man from Chicago. He knew enough to watch which way the wind was blowing. Before he and his brother Jack co-founded Decca Records in 1934, they worked for their father, Meyer Kapp, who ran a franchised Columbia Records dealership in downtown Chicago called the Imperial Talking Machine Store. Meyer was known in Columbia circles as a “hit forecaster” because, as he delivered to and took orders from customers in his horse-drawn buggy, he came to understand and respect public taste. Jack was fourteen when he started working for Meyer; Dave followed. By 1921, the brothers had opened Kapp Music & Radio at 2308 West Madison, a phonograph dealership where they also sold race and hillbilly records for eleven years. But they wanted to go beyond the sales counter. Dave knew the value of song publishing, so he used the store’s address to solicit songs in the Chicago Tribune classifieds.
Meanwhile, Jack worked his way up the ladder at Columbia, Vocalion, and Brunswick. By scouring Chicago dance halls and clubs and taking road trips through the South to find new artists, the brothers, like their father, became experts at predicting what the public wanted to hear. They were melody men who believed good songcraft was the ticket to winning over anyone. The theory came from the store, where customers would routinely come through the door and admit they didn’t know what they wanted, “leaving the rest to the dealer’s judgment,” said Jack.

Decca was one of three major labels dominating the country music business, along with Columbia and RCA Victor. Under Dave Kapp, Decca’s country roster flourished. He discovered and groomed Ernest Tubb, Milton Brown, Rex Griffin, Jimmie Davis, the Sons of the Pioneers, Red Foley, and the Carter Family. Kapp also brought country music to a national audience by borrowing songs that had momentum in the rural market and handing them to pop artists to record as national hits. It’s why Bing Crosby, the most popular singer of his era and a Decca artist, had bigger hits with his versions of “You Are My Sunshine” and “It Makes No Difference Now” than Jimmie Davis, who recorded them first. That spirit of reinvention also played out over time. One of the sixty Carter Family sides that Kapp recorded between 1936 and 1938 was “No Depression in Heaven,” a song that a central Illinois band called Uncle Tupelo recast fifty-four years later as loud and fast punk, unintentionally making it a touchstone for like-minded bands who sought new inspiration in the lyrics, themes, and melodies of recordings made before the rock and roll era.

This book is about Chicago’s defining role in these kinds of improbable exchanges among artists who freely reinvented country and folk traditions, and their empowerment by a series of gatekeepers, some of them radical idealists and othershard-knuckled hustlers. Together, they kept the dance churning in Chicago, seemingly the least likely place for the music to flourish.

With its promise of opportunity, whether factory work, higher education, or simply a middle-class lifestyle, Chicago became an unusual hothouse for creativity. It offered economic stability, something other cities could not always promise. As the larger recording industry drifted to both coasts in the middle of the twentieth century, people followed, lured by the promise of fortunes. In Chicago, however, there emerged the figure of the working auteur who could freely experiment, perform, and collaborate because they existed far from the star-making structures of Hollywood, Broadway, and Nashville’s Music Row. Chicago’s artists were not roped off from their audiences; instead, they lived and worked alongside them. The immediacy of making music within such an incubator community naturally gave artists who were uninterested in chasing popular trends the support to pivot left. They could pursue other sounds or strike up creative partnerships or cull musical ideas from the past and forge them into something that felt modern but still wholly their own creation. No one was looking, until they were.