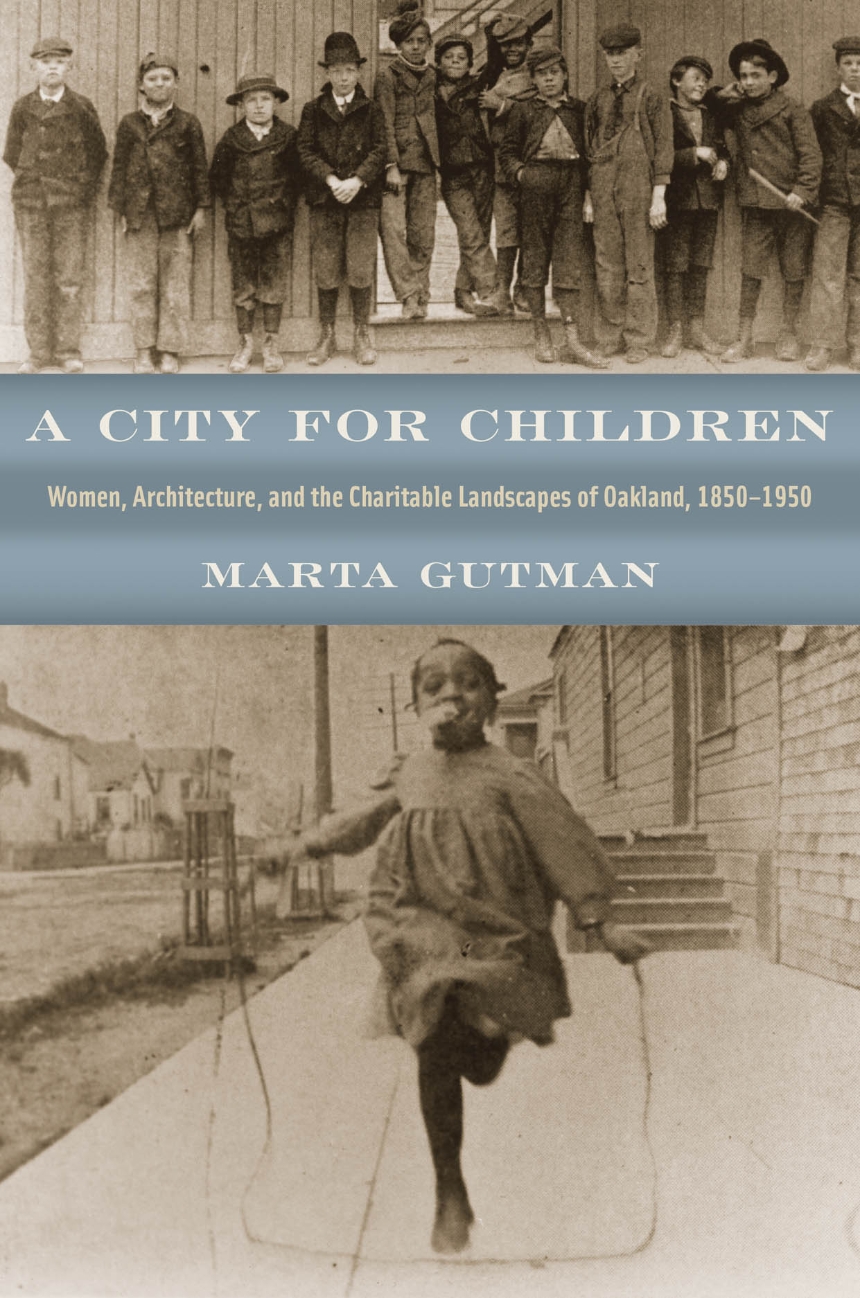 A City for Children

Women, Architecture, and the Charitable Landscapes of Oakland, 1850-1950

A City for Children

Women, Architecture, and the Charitable Landscapes of Oakland, 1850-1950

American cities are constantly being built and rebuilt, resulting in ever-changing skylines and neighborhoods. While the dynamic urban landscapes of New York, Boston, and Chicago have been widely studied, there is much to be gleaned from west coast cities, especially in California, where the migration boom at the end of the nineteenth century permanently changed the urban fabric of these newly diverse, plural metropolises.

In A City for Children, Marta Gutman focuses on the use and adaptive reuse of everyday buildings in Oakland, California, to make the city a better place for children. She introduces us to the women who were determined to mitigate the burdens placed on working-class families by an indifferent industrial capitalist economy. Often without the financial means to build from scratch, women did not tend to conceive of urban land as a blank slate to be wiped clean for development. Instead, Gutman shows how, over and over, women turned private houses in Oakland into orphanages, kindergartens, settlement houses, and day care centers, and in the process built the charitable landscape—a network of places that was critical for the betterment of children, families, and public life.  The industrial landscape of Oakland, riddled with the effects of social inequalities and racial prejudices, is not a neutral backdrop in Gutman’s story but an active player. Spanning one hundred years of history, A City for Children provides a compelling model for building urban institutions and demonstrates that children, women, charity, and incremental construction, renovations, alterations, additions, and repurposed structures are central to the understanding of modern cities.

Color images are included in the e-book edition only.

“The book is an underground earthquake. So many of us forget that cities do not just happen, but rather are designed, mis-designed and misled, conceived on foundations that sometimes are, very simply, built upside down or on shaky grounds. I loved reading it.”

“Gutman puts forward an expansive view of the built environment that pays close attention to the ways that reforms in the urban environment and changes in attitudes toward childhood crossed with architecture, interiors, and material culture. . . . A City for Children offers . . . a point of view that asks us to penetrate facades and closely look at what happened in the streets to understand the social forces that shaped the landscape of society.”

“Remarkable. Based on extensive research, A City for Children is a sophisticated historical investigation into a wide range of charitable institutions built by women in Oakland, California, in the late nineteenth and early twentieth centuries primarily to serve the needs of children. Gutman is particularly attentive to the racial politics that informed the development of these institutions, and like all of her work, this book promises to inform current public policy debates, not just about Oakland, but also about American cities in general.”

“An outstanding book, based on creative research and innovative historical framing, A City for Children is the most comprehensive and nuanced study of the cultural landscape of charitable institutions.  Gutman’s expertise in the history of childhood, gender studies, and architecture make this an ambitious and path-breaking work.”

“The ‘charitable landscape,’ is just one of the multiple layers of urban history that Marta Gutman has recovered and brought vividly to light. She has also exposed the complicated and intertwined relations of race and gender that were built into the urban fabric.  By book’s end, readers will be richly rewarded with a poignant recognition of the everyday human triumphs and losses that gave shape to the physical spaces of our cities.”

“This beautifully crafted and original account describes the fraught creation of what became an everyday halcyon in Oakland, California: the building, beginning in the late 19th century, of a ‘charitable landscape’ to improve the lives of children.  Marta Gutman brilliantly brings to life a remarkable, and fortifying, coincidence of women’s will, civic spirit, and Progressive politics that ‘repurposed’ space to benefit—and create—the city’s smallest subjects.  Depicting a remarkable cohort that sought to remake the city by, among other things, converting saloons to kindergartens, this book uncovers a nexus of design and social life, rich with nuance and implication.  An exceptionally tender work.”

Michael Sorkin, director of the Graduate Urban Design Program at the City College of New York

“With remarkable detail, nuance and clarity Marta Gutman recovers the history of Oakland’s charitable institutions for children in a way that offers transformative insights into the landscapes of age, gender, race, religion, philanthropy, and urban development. Gutman takes the ‘landscapes’ of her title literally—this is most powerfully a book about space, about the ideas, practices, and social and material conditions that enabled women to claim spaces for children.  In many instances they did this by repurposing buildings initially constructed with other intentions. Marta Gutman’s manner of writing history participates in this tradition of strategic repurposing garnering the materials of architectural history, women’s history, children’s history, and the history of urban reform to forge something new. This is a wonderful book.”

“Synthesizing a rich blend of methodologies and primary sources, Gutman presents a meticulous investigation of how institutional spaces socialized orphans to follow ‘useful,’ gendered, middle-class narratives for life. . . . A great strength is Gutman’s ability to contextualize local events with larger intellectual currents within the US and abroad. . . . Recommended.”

“Gutman takes considerable pains to present the history of Oakland’s charitable institutions for children in the context of state, regional, national, and even international trends, broadening the book’s appeal and value. . . . [An] ambitious work that argues so compellingly for the importance of urban structures designed for the betterment of children, families, and public life.”

“Much like the charity women who transformed old to new, Gutman breathes new life into our understanding of women, children, and architecture—adding, raising, and repurposing theoretical and historical scholarship—to make an important contribution to our understanding of charity in the American West. . . . This thoroughly enjoyable and informative read is likely to find a place on the shelves of those most interested in the history of architecture, childhood, women, and reform. Gutman’s penetrating analysis plugs a gaping hole in our understanding of the charitable landscape of the West and United States more broadly.”

Journal of the Gilded Age and Progressive Era

“A City for Children should generate exciting new avenues for historical inquiry. Most importantly, it points to some innovative ways to conceptualize various educational and social welfare landscapes of the past and to utilize more spatial, visual, and cartographic evidence to deepen our understanding of how historical space and human experience interacted. The extensive use of illustrations as part of the narrative offers a primer for how to use maps, photographs, and building plans to interpret the changing social relations of a neighborhood. Historians of education interested in how schools shaped, and were shaped by, their social and physical surroundings, as well as children in classrooms, will likely find much of interest in Gutman’s methodology.”

“A City for Children is a monumental achievement about non-monumental architecture. The book is monumental because it explores an entire century of children’s architecture in a single place, Oakland, California. Unlike most monuments, however, buildings for children remain largely invisible in our cities and histories. Gutman’s achievement is to uncover the complex landscape designed and re-designed to support children, explaining how these hidden spaces functioned and why they matter.”

“As is so often the case, the future lies latent in the past. A City for Children holds up a rich layer of the past for scrutiny and for our collective betterment, vividly demonstrating the power of history for understanding both the past on its own terms and the present through recourse to the past. Scholars of contemporary children’s environments are especially encouraged to seek out this text.”

“In A City for Children, Marta Gutman explores how charitable institutions housed in repurposed buildings attempted to replace ‘damaged’ childhoods with ‘good’ ones. She documents in meticulous detail the buildings and spaces that the women of Oakland created in the nineteenth and early twentieth centuries to take care of kids. . . . This is a well-written book, more accessible than many social histories because Gutman mixes theoretical references to Foucault with colloquial language. . . . She pays attention to the intersection of economic, political, and architectural history, as when she acknowledges the connection between real estate cycles and the ways women saved many places from speculative development. Gutman also weaves toged1er the stories of whites and blacks, native- and foreign born, and Catholics and Protestants. The book’s style and comprehensive coverage make it appropriate for undergraduate and graduate students in the fields of urban history and women’s history.”

“Gutman provides a remarkably detailed portrait of the built environment and of the strategic reuse of existing structures. The repurposed and newly erected charity buildings, Gutman argues, represented the political influence of women who were, in theory at least, denied access to politics and social power. Gutman wants to celebrate these elite women reformers while also noting their racism and class-determined politics. She makes her case with exhaustive research and exemplary images.”

Journal of the History of Childhood and Youth

“What makes this book so important, ultimately, is the contribution it makes, as a work of history, to our present and our future. Through its consideration of the everyday landscape, the interconnections between buildings and people, it recovers the past, warts and all, peopled by intensely human, hopeful, and dedicated women, flawed figures who supported and worked within structures of inequality and racism. It is a story of success and failure, of conflict and change, of the relationship between private effort and public responsibility. A City for Children provides a framework for understanding the importance and possibilities of preservation, repurposing, and grassroots reform.”

“The central motif of A City for Children is that a charitable landscape developed as a spatial entity with various “nodes” in a shifting urban network. Gutman reconstructs the presence, appearance, and experience of institutions, most of which are now long gone. Using archives, oral histories, photographs, fire insurance maps, city directories, and census and tax records, Gutman gives spatial coherence to a story that is by nature fragmentary. Her own architectural renderings and schematic drawings of neighborhoods are especially helpful in reconstituting a story that is simultaneously architectural, urban, and social.”

List of Illustrations
Acknowledgments
ONE / New Ideas from Old Things in Oakland
TWO / The Landscape of Charity in California: First Imprints in San Francisco
THREE / The Ladies Intervene: Repurposed and Purpose-Built in Temescal
FOUR / The West Oakland Home: The “Noble Work for a Life Saving” of Rebecca McWade
FIVE / The Saloon That Became a School: Free Kindergartens in Northern California
SIX / The Art and Craft of Settlement Work in Oakland Point
SEVEN / “The Ground Must Belong to the City”: Playgrounds and Recreation Centers in Oakland’s Neighborhoods
EIGHT / Orphaned in Oakland: Institutional Life during the Progressive Era
NINE / Childhood on the Color Line in West Oakland: Day Nurseries during the Interwar Years
Epilogue
Oral Histories and Interviews
Abbreviations Used in the Notes
Notes
Index
Back to top