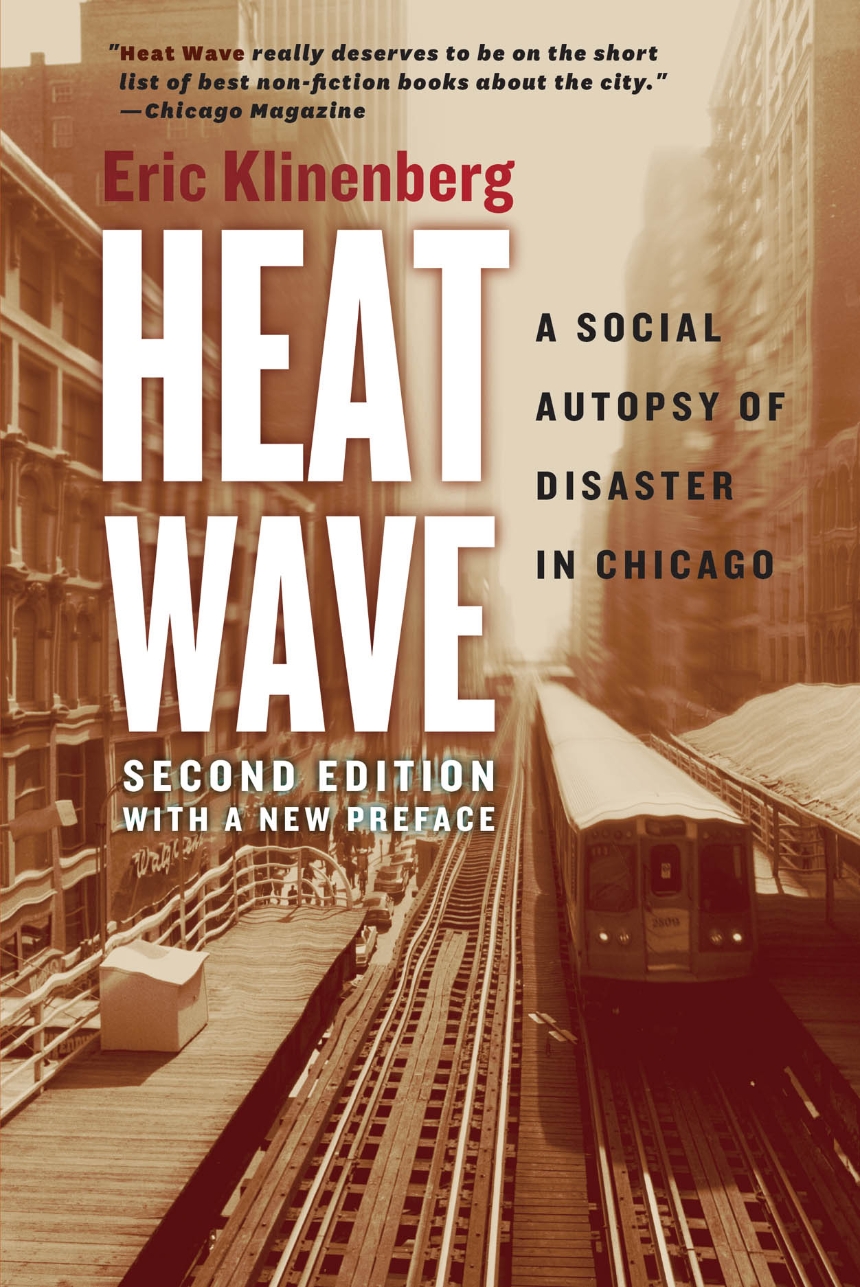 A Social Autopsy of Disaster in Chicago

A Social Autopsy of Disaster in Chicago

With a New Preface
"A classic. I can't recommend it enough."--Chris Hayes

On Thursday, July 13, 1995, Chicagoans awoke to a blistering day in which the temperature would reach 106 degrees. The heat index, which measures how the temperature actually feels on the body, would hit 126 degrees by the time the day was over. Meteorologists had been warning residents about a two-day heat wave, but these temperatures did not end that soon. When the heat wave broke a week later, city streets had buckled; the records for electrical use were shattered; and power grids had failed, leaving residents without electricity for up to two days. And by July 20, over seven hundred people had perished-more than twice the number that died in the Chicago Fire of 1871, twenty times the number of those struck by Hurricane Andrew in 1992—in the great Chicago heat wave, one of the deadliest in American history.

Heat waves in the United States kill more people during a typical year than all other natural disasters combined. Until now, no one could explain either the overwhelming number or the heartbreaking manner of the deaths resulting from the 1995 Chicago heat wave. Meteorologists and medical scientists have been unable to account for the scale of the trauma, and political officials have puzzled over the sources of the city's vulnerability. In Heat Wave, Eric Klinenberg takes us inside the anatomy of the metropolis to conduct what he calls a "social autopsy," examining the social, political, and institutional organs of the city that made this urban disaster so much worse than it ought to have been.

Starting with the question of why so many people died at home alone, Klinenberg investigates why some neighborhoods experienced greater mortality than others, how the city government responded to the crisis, and how journalists, scientists, and public officials reported on and explained these events. Through a combination of years of fieldwork, extensive interviews, and archival research, Klinenberg uncovers how a number of surprising and unsettling forms of social breakdown—including the literal and social isolation of seniors, the institutional abandonment of poor neighborhoods, and the retrenchment of public assistance programs—contributed to the high fatality rates. The human catastrophe, he argues, cannot simply be blamed on the failures of any particular individuals or organizations. For when hundreds of people die behind locked doors and sealed windows, out of contact with friends, family, community groups, and public agencies, everyone is implicated in their demise.

As Klinenberg demonstrates in this incisive and gripping account of the contemporary urban condition, the widening cracks in the social foundations of American cities that the 1995 Chicago heat wave made visible have by no means subsided as the temperatures returned to normal. The forces that affected Chicago so disastrously remain in play in America's cities, and we ignore them at our peril.

For the Second Edition Klinenberg has added a new Preface showing how climate change has made extreme weather events in urban centers a major challenge for cities and nations across our planet, one that will require commitment to climate-proofing changes to infrastructure rather than just relief responses.

Read an interview with the author.

"By the end of Heat Wave, Klinenberg has traced the lines of culpability in dozens of directions, drawing a dense and subtle portrait of exactly what happened during that week in July."

A trenchant, multilayered and well-written social autopsy of disaster. . . . God is in the details, though, and Klinenberg painstakingly lays out for us both the structural and more proximate policies that led to the disastrous Chicago mortality figures of July 1995."

“Remarkable . . . Klinenberg’s immediate aim is to explain the heat wave’s unprecedented death toll, and he does so with chilling precision. But his ultimate achievement is far more significant. In exploring what made Chicago so vulnerable to disaster in 1995, Klinenberg provides a riveting account of the changes that reshaped urban America during the 1990s and, indeed, throughout the postwar era.”

"A damning indictment of the 'malign neglect' with which the old, frail and poor and isolated are treated in Chicago."

"In a typical year more Americans die in heat waves than in all other natural calamities combined. Yet they hardly generate the kind of buzz that hurricanes, earthquakes, tornadoes, or wildfires do. In the compelling, sobering, and exhaustively researched Heat Wave, Eric Klinenberg suggests a plausible reason."

"Heat Wave is not so much a book about weather, as it is about the calamitous consequences of forgetting our fellow citizens. . . . A provocative, fascinating book, one that applies to much more than weather disasters."

"Trenchant and persuasive. . . . What makes Heat Wave such an essential book at this moment in American politics is that, using the 1995 heat wave as his paradigm, Klinenberg has written a forceful account of what it means to be poor, old, sick and alone in the era of American entrepreneurial government. . . . It's hard to put down Heat Wave without believing you've just read a tale of slow murder by public policy."

"Klinenberg creates a compelling sociological history that is in critical and productive conversation with current cultural analyses of catastrophe and contemporary urban sociologies of race, class, and marginality."

"Once in a while it is said, 'Someone will have to write a book about this.' Heat Wave . . . is that book on urban catastrophes. Klinenberg has meticulously documented a great tragedy in recent Chicago History. He has written it in a manner which allows scholars, activists, community planners and policy-makers to draw lessons, so that it may never happen again."

"This masterful study of the intersection of the political and the ecological reveals just how important it is that sociologists look not just a t trends or patterns over time, but at specific events. . . . . . . . Heat Wave is a great book because it focuses its attention on a tear in the social fabric in order to explore more deeply  the normal-time weave, and to raise these critical questions about what might be the institutional forms and the cultural contents of a society that would rescue its citizens who live 'normally' in extremis."

"A riveting account . . . that delves into the processes leading to social isolation, the social and built ecology of urban neighborhoods, and the failure of city, state, and federal governments to prevent or respond to a public health crisis. . . . Heat Wave is well worth a read regardless of one’s interest in heat waves or public health. . . . It is well-suited for required reading in public health and social science courses and for fascinating armchair reading."

"Relying on ethnographic fieldwork, spatial and statistical analysis, in-depth interviewing, and archival research, Klinenberg’s book is a very accomplished sociological case study, imaginatively conceived, tenaciously researched, and . . . strikingly innovative. The work illuminates the contemporary problems of aging, popery, and community neglect with great skill and sensitivity. In the process, Heat Wave offers an exemplary demonstration of how an intensive, multilayered analytical focus on an extreme case or event can yield fresh insight into the social structures, ecologies, and policies that produce everyday inequity and hardship."

"It is riveting. It is intellectually exciting. If it is not pathbreaking for the study of political communication, it is nonetheless destined to be a recurrent point of reference and an excellent choice for classroom use. . . . This is a stunningly good book, a rare work with broad vision, theoretical savvy, and prodigious leg work in government bureaus, city news rooms, and tough neighborhoods. . . . Klinenberg touched every base, took no shortcuts, and has produced a sociological masterpiece."

"Heat Wave is an exquisitely written, impeccably researched work, and one could hardly imagine how anyone could do more in a single effort to reveal the deadly social fractures of the cities we live in. In this brilliant book, Klinenberg makes visible the ongoing disaster of poverty and isolation that is silently unraveling in some of the most affluent cities in North America."

Preface to the Second Edition
Prologue: The Urban Inferno

Introduction: The City of Extreme

1. Dying Alone: The Social Production of Isolation
2. Race, Place, and Vulnerability: Urban Neighborhoods and the Ecology of Support
3. The State of Disaster: City Services in the Empowerment Era
4. Governing by Public Relations
5. The Spectacular City: News Organizations and the Representation of Catastrophe

Epilogue: Together in the End