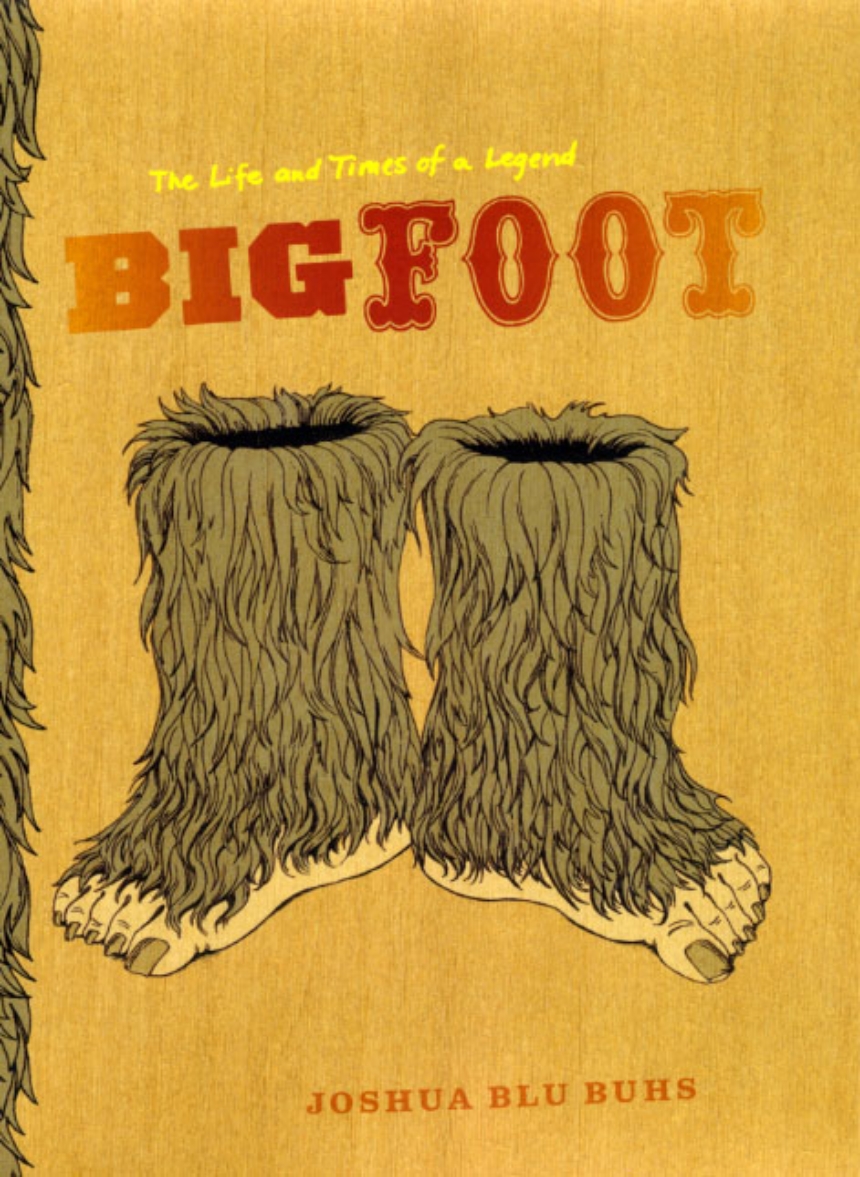 The Life and Times of a Legend

The Life and Times of a Legend

Last August, two men in rural Georgia announced that they had killed Bigfoot. The claim drew instant, feverish attention, leading to more than 1,000 news stories worldwide—despite the fact that nearly everyone knew it was a hoax. Though Bigfoot may not exist, there’s no denying Bigfoot mania.

With Bigfoot, Joshua Blu Buhs traces the wild and wooly story of America’s favorite homegrown monster. He begins with nineteenth-century accounts of wildmen roaming the forests of America, treks to the Himalayas to reckon with the Abominable Snowman, then takes us to northern California in 1958, when reports of a hairy hominid loping through remote woodlands marked Bigfoot’s emergence as a modern marvel. Buhs delves deeply into the trove of lore and misinformation that has sprung up around Bigfoot in the ensuing half century. We meet charlatans, pseudo-scientists, and dedicated hunters of the beast—and with Buhs as our guide, the focus is always less on evaluating their claims than on understanding why Bigfoot has inspired all this drama and devotion in the first place. What does our fascination with this monster say about our modern relationship to wilderness, individuality, class, consumerism, and the media?

Writing with a scientist’s skepticism but an enthusiast’s deep engagement, Buhs invests the story of Bigfoot with the detail and power of a novel, offering the definitive take on this elusive beast.

See an excerpt, an interview with the author, and Buhs in dialogue with Sigrid Schmalzer about Bigfoot and the yeren.

“The mistaken assumption of past Bigfoot investigation is that the phenomenon is best understood from the perspective of natural history. Joshua Blu Buhs has written an original and engaging book that tells us the meaning of the hairy beast that won’t go away yet we cannot seem to find. Bigfoot is the definitive history of the legend’s social and cultural context, and it offers an explanation for the phenomenon that will be pondered and discussed for years to come.”

“While Bigfoot researchers have grown weary of skeptical treatments of the topic, Joshua Buhs’s examination of the Sasquatch is refreshingly crisp and insightful, as opposed to demeaningly debunking. His grasp of the popular cultural significance of Bigfoot is outstanding and his overview of the legacy of these creatures is topnotch. Highly recommended.”

Loren Coleman, author of The Field Guide to Bigfoot and Other Mystery Primates

"Buhs is at his amused best when following the exploits of Bigfoot’s human handlers—the colorful band of true believers, hoaxers and pseudo-documentarists who constructed this greatest of all shaggy-hominid stories."

“Thoroughly discredited hoaxes regarding seeing or shooting an actual Bigfoot notwithstanding, media interest in whether giant wild humanoids exist is readily re-ignitable. In 1962, Robert Hatfield struck the match when a ‘half-man, half-beast monster’ chased him into a cabin but ran off before Hatfield trained a gun on it. Good for Hatfield, maybe, since the gun wasn’t loaded, but fortuitous, anyway, for keeping the Bigfoot legend going, since once again there was no physical evidence of the fabled creature. Buhs undertakes the telling of ‘how the modern myth of Bigfoot emerged” and uses the terms Bigfoot, Yeti, Abominable Snowman, and Sasquatch more or less interchangeably throughout, since all refer to not-quite-human creatures living in the wild that are preternaturally elusive. Proceeding era by era and place by place, Buhs evaluates the stories of encounters with the giant creatures, deconstructs hoaxes, and evaluates genuine studies in service of tracking down the truth. His conclusions seem well-founded but are highly unlikely to end debate.”

“The value of Buhs’s book is in its synthesizing of the many historical Bigfoot/Sasquatch stories into one readable narrative, and its summing-up of the state of Bigfoot research and belief today.”

"The stories are invatiably interesting, sometimes strange, often humorous and always entertaining. It’s a good read, particularly if you’ve ever camped in a wilderness and wondered what lurks in the darkness just beyond the dying campfire light."

"[Bigfoot] is an oversized footprint of Americana, and a fun read. Bigfoot may not be stomping through the American wilderness, but his legend still lives in the forests of our imagination."

"Joshua Blu Buhs, listed in the back cover as 'an independent scholar' gets a two thumbs-up from me for doing something no author in Bigfooting history ever achieved: he published a rare picture of the late Betty Allen, someone who was prominent when things got afoot in northern California around 1958. The depth and level of scholarship of his work is impressive, no doubt, but 'believers' might be taken aback by the cover of the book...and also by Mr. Buhs prefatory remarks: 'I still don't think that Bigfoot exists...'"

"This book is a must for every GCS member! ... Here, between the covers of one book, is all you ever wanted to know about Bigfoot - and about Sasquatch, the Abominable Snowman, the Yeti and the strange Wildman of the Woods - that perhaps roam uncharted forests......Bigfoot is guaranteed to become a classic."

"Bigfoot's Andy Warhol moment occurred in 1967... For Buhs, more the cultural anthropologist..., Bigfoot surged due to a convergence of circumstances: It was a working-class male reaction against feminism and civil rights, a nostalgic return to a lost wilderness, a classic horror movie return-of-the-repressed with Mansonesque killer-hippie trappings."

"Author Joshua Blu Buhs is an 'independent scholar' and approaches Bigfoot the way a tenured scholar might. In 'Bigfoot: The Life and Times of a Legend,' Buhs adds a 20-page bibliography that gives the book an air of academic legitimacy; he also uses more footnotes and citations than a David Foster Wallace fanboy."

"This book, by author Blu Buhs, is really well-written and well-done, and it tends to take the skeptical tack, of course, giving a history of some of the major players in the Bigfoot field and some behind-the-scenes information on each....I would most assuredly recommend this book."

"In his witty account, the American scholar ans sceptic Joshua Blu Buhs sets out in search of an animal variously claimed as America's only remaining ape, an extant Neanderthal, or an even older hominid such as Gigantophithecus.... In his postmodern attempt to pin down Bigfoot, Buhs's focus is on the hunters, rather than the hunted; this is not so much a book about Bigfoot as the belief in him."

"...likely to be the definitive history of the Bigfoot of the imagination for some considerable time, tracking the development of the myth, showing the various streams of the story: the theme of the Wildman in all human cultures; Yeti hunting in the Himalayas; Canadian Pacific tales of Sasquatch collected by John Burns; the modern fakelore of Bigfoot which rapidly went feral to become real folklore."

1 Wildmen
Wildmen through History
What-Is-It
The Abominable Snowman
The Life and Times of Bigfoot
2 Yeti: 1951–1959
Sensation
The Yeti, Science, and Zadig’s Method
Britain Hunts the Yeti
America Hunts the Yeti
What the Evidence Told
3 Sasquatch: 1929–1958
The Great Sasquatch Hunt
The Kidnapping of Albert Ostman
“Occam’s Razor Cuts on the Side of the Sasquatch”
Slick Eyes the Sasquatch
4 Big Foot: 1958
The Folkloric Origins of Bigfoot
Big Foot Makes the Papers
The Confirmed and Converted Confront Bigfoot
Humbug!
“Maybe Bigfoot is Lost Relative of Old ‘Sasquatch’”
5 ABSMery: 1959–1961
The (Weird, Wacky) Wonderful World of Ivan T. Sanderson
ABSMery
The Pacific Northwest Expedition
Enter Peter Byrne
The Wipe: Or True’s Trouble with Truth, and Ivan Sanderson’s
6 Melting the Snowman: 1961–1967
Melting the Snowman
Sanderson’s Failed Debunking of the Debunking
The Quiet Years
Big Foot Daze
7 The Return of Bigfoot: 1967–1980
Bigfoot Filmed!
Making Sense of the Movie
The Return of Bigfoot
Bozo, the Minnesota Iceman
Bigfoot on Tour
The Secret of Sasquatch
8 A Contest for Dignity: 1969–1977
The Bigfoot Community
Cripplefoot
The Center that Wasn’t
Hoaxing, the Unconquerable Problem
The Laugher Curtain
9 Cryptozoology: 1978–1990
Grover Krantz, Sasquatch Scientist
Anthropology of the Unknown
Cryptozoology
Science Police
“Definitive Proof”
Arrested by the Science Police
10 The Death of Bigfoot? 1980–2002
The Green Man
The Death of Bigfoot
“The Most Abominable Hoaxer”
Bigfoot is Dead! Long Live Bigfoot!
Not The End, but An End
Curse of the Sasquatch