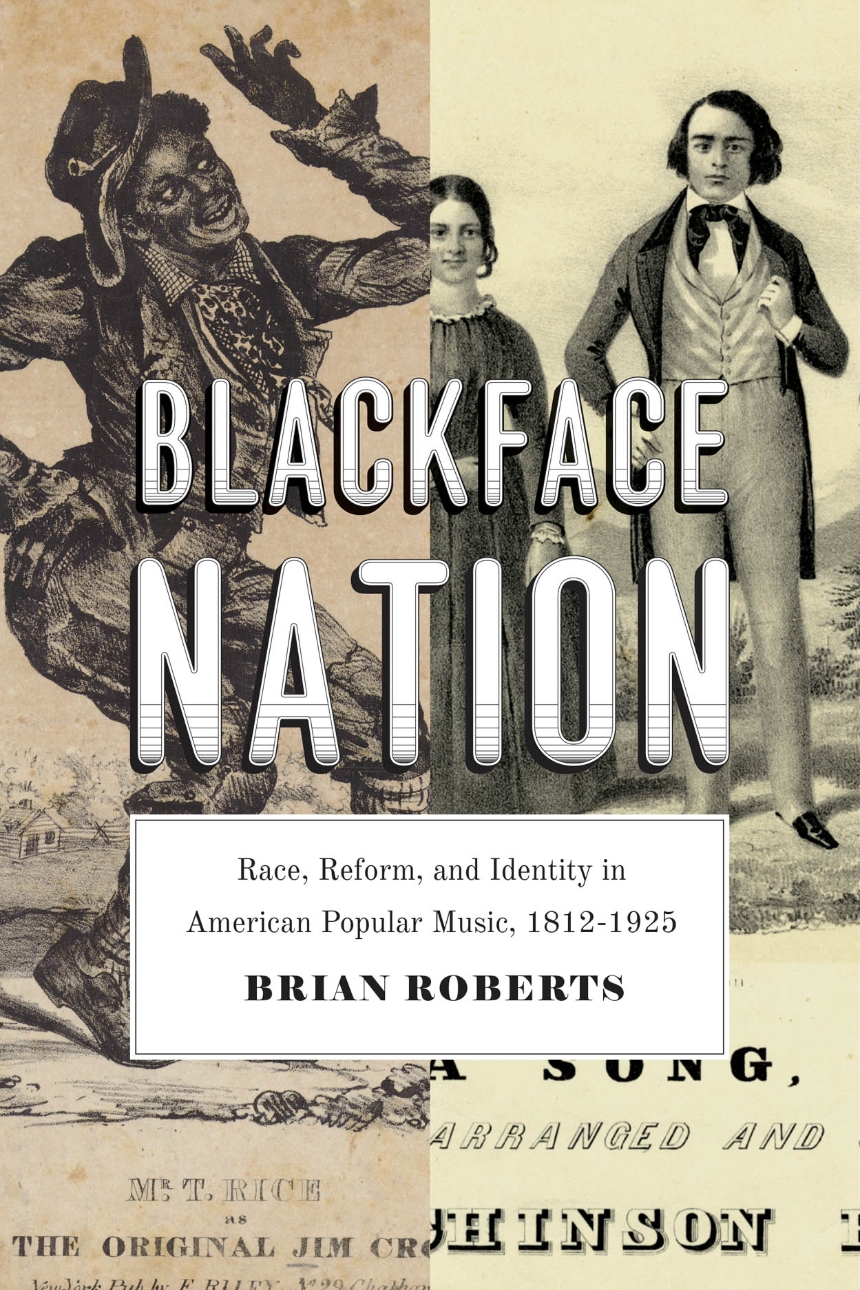 As the United States transitioned from a rural nation to an urbanized, industrial giant between the War of 1812 and the early twentieth century, ordinary people struggled over the question of what it meant to be American. As Brian Roberts shows in Blackface Nation, this struggle is especially evident in popular culture and the interplay between two specific strains of music: middle-class folk and blackface minstrelsy.

The Hutchinson Family Singers, the Northeast’s most popular middle-class singing group during the mid-nineteenth century, is perhaps the best example of the first strain of music. The group’s songs expressed an American identity rooted in communal values, with lyrics focusing on abolition, women’s rights, and socialism. Blackface minstrelsy, on the other hand, emerged out of an audience-based coalition of Northern business elites, Southern slaveholders, and young, white, working-class men, for whom blackface expressed an identity rooted in individual self-expression, anti-intellectualism, and white superiority. Its performers embodied the love-crime version of racism, in which vast swaths of the white public adored African Americans who fit blackface stereotypes even as they used those stereotypes to rationalize white supremacy. By the early twentieth century, the blackface version of the American identity had become a part of America’s consumer culture while the Hutchinsons’ songs were increasingly regarded as old-fashioned. Blackface Nation elucidates the central irony in America’s musical history: much of the music that has been interpreted as black, authentic, and expressive was invented, performed, and enjoyed by people who believed strongly in white superiority.  At the same time, the music often depicted as white, repressed, and boringly bourgeois was often socially and racially inclusive, committed to reform, and devoted to challenging the immoralities at the heart of America’s capitalist order.

“Wide in scope, Blackface Nation examines many of the important episodes in 19th-century US history through popular music. Demonstrating both story-telling skills and a remarkable command of print sources – including song sheets, songsters, broadsides, and numerous other published records from the period – perhaps Roberts’s greatest achievement in this study is unfolding a gripping account of American culture while maintaining a remarkable focus on its expressions in song and music. The result is one of the most informative and persuasive cultural histories of the 19th century to come out in recent years. . .Blackface Nation will prove invaluable as a study that maintains a firm grip on the broader historical context and the archive, even as it approaches subject matter that too often remain in the realm of other, related fields such as theater, music, and American studies.”

“In this engaging treatment of nineteenth- and early twentieth-century American popular music and culture, Brian Roberts provides a readily accessible analysis of American life during its highly formative years. Thoroughly grounded in research, Roberts’s talented reconstruction captures personalities and landscapes that draw readers into his story. He offers fine detail to enrich the imagined world evoked by his archival sources. . . . Roberts contributes significantly to a more nuanced understanding of nineteenth century American culture. He takes his well-deserved place among the historians who successfully use music as
a rich and evocative means for understanding American culture writ large. His interdisciplinary approach extends into theater and literature, which are well suited to cultural historical study. . . . Roberts has crafted a worthy contribution to cultural historical study and appreciation.”

“It is no easy thing to produce a strikingly original book covering blackface minstrelsy, a topic on which longstanding, cross-disciplinary, and voluminous scholarship exists. Roberts make blackface performance speak meaningfully to the whole of US history—especially to rebellion, settler colonialism, republicanism, gender, and white supremacy. The placing of the War of 1812 as a watershed in US popular culture is especially remarkable. Roberts treats blackface over a long period of time, beginning before and extending well after its heyday. Accessible and sometimes displaying a sly humor, Blackface Nation deserves a wide readership in and beyond undergraduate classrooms.”

“Blackface Nation is a brilliantly incisive retelling of nineteenth-century American history from the perspective of the nation’s arguably most revealing art form: popular music. With an ear finely tuned to the discordant harmonies of a slave society in its final throes, Roberts charts the rise of the modern racial state in the triumph of blackface songs over abolitionist anthems.”

Elise Lemire, author of Black Walden: Slavery and Its Aftermath in Concord, Massachusetts

Brian Roberts begins Blackface Nation with two claims. First, he argues that in order to understand the making of systemic racism in the United States, we must understand how nineteenth century popular music created and contested constructions of racial difference. Second, he states that “as much as America exists in history, it is also a musical” (23). To address this first argument, Roberts connects three trends in popular song that emerged before the Civil War: patriotic songs, blackface minstrelsy, and the widely popular, politically progressive repertoire of the Hutchinson Family Singers. Through the process of making this first point, Roberts inherently addresses his second and essentially reframes much of what we know about the nineteenth century through the lens of popular music."