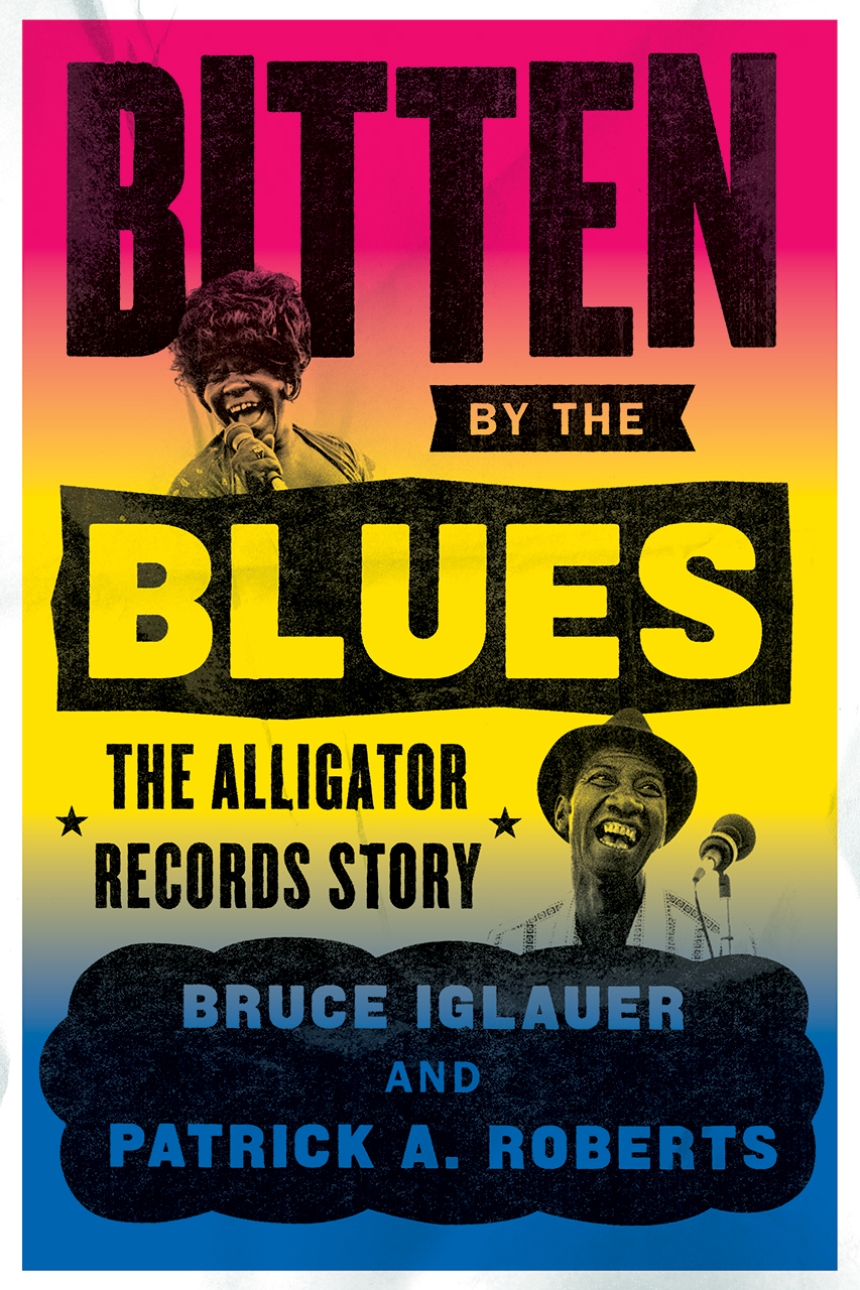 Bruce Iglauer and Patrick A. Roberts

Bruce Iglauer and Patrick A. Roberts

It started with the searing sound of a slide careening up the neck of an electric guitar. In 1970, twenty-three-year-old Bruce Iglauer walked into Florence’s Lounge, in the heart of Chicago’s South Side, and was overwhelmed by the joyous, raw Chicago blues of Hound Dog Taylor and the HouseRockers. A year later, Iglauer produced Hound Dog’s debut album in eight hours and pressed a thousand copies, the most he could afford. From that one album grew Alligator Records, the largest independent blues record label in the world.

Bitten by the Blues is Iglauer’s memoir of a life immersed in the blues—and the business of the blues. No one person was present at the creation of more great contemporary blues music than Iglauer: he produced albums by Koko Taylor, Albert Collins, Professor Longhair, Johnny Winter, Lonnie Mack, Son Seals, Roy Buchanan, Shemekia Copeland, and many other major figures. In this book, Iglauer takes us behind the scenes, offering unforgettable stories of those charismatic musicians and classic sessions, delivering an intimate and unvarnished look at what it’s like to work with the greats of the blues. It’s a vivid portrait of some of the extraordinary musicians and larger-than-life personalities who brought America’s music to life in the clubs of Chicago’s South and West Sides. Bitten by the Blues is also an expansive history of half a century of blues in Chicago and around the world, tracing the blues recording business through massive transitions, as a genre of music originally created by and for black southerners adapted to an influx of white fans and musicians and found a worldwide audience.

Most of the smoky bars and packed clubs that fostered the Chicago blues scene have long since disappeared. But their soul lives on, and so does their sound. As real and audacious as the music that shaped it, Bitten by the Blues is a raucous journey through the world of Genuine Houserockin’ Music.

“This book is long overdue. Alligator Records has been a cornerstone of the blues world for over four decades. The stories about the artists and sessions that have paved the way for so many others are a pleasure to read. As an Alligator artist I am truly grateful for what Bruce and Alligator Records have done for me and this genre.”

“Bruce and his history with Alligator Records encompass so much of the richest and most exciting eras of urban blues. All the fascinating stories and behind-the-scenes intrigues are here, and the indelible legacy of his commitment to this music and the artists he cares so passionately about makes this a terrific, important read.”

“When I was about twenty years old, Hound Dog Taylor & The HouseRockers were my imaginary best friends.  They were with me everywhere I went because I always had my portable CD player with me.  I know for a fact I wouldn’t be in this business if Bruce hadn’t released those first two Hound Dog records. The fire Bruce captured on those records is the magic place I’m reaching for every time I’m in my studio.”

“Blues and gospel have always been first cousins, and Bruce was as supportive and gracious to me as you could imagine, always willing to offer his insight and expertise. He's been a true friend of the blues and independent music."

“Bruce Iglauer stepped through the door of Florence’s Lounge on Chicago’s South Side and into a timeless love affair with the blues. Iglauer’s story is about finding talent, nurturing it, and sharing it with others. It’s also about staying independent in a world where conglomerates glom and Big Tech assumes more power. His Alligator Records is a soundtrack to modern blues, from Hound Dog Taylor in 1970 on through Son Seals and Albert Collins and to today’s JJ Grey & Mofro. There are great stories here.”

Robert Gordon, author of Respect Yourself: Stax Records and the Soul Explosion

“In many ways the story of Alligator Records is the story of the blues over the last fifty years. Bitten by the Blues is the saga of Alligator Records through the eyes of the one person who knows it best—label founder and owner Bruce Iglauer. With his tough business mind, coupled with an often self-effacing sense of humor, Iglauer tells the tale of the Gator with candor and clarity. From the first Hound Dog Taylor record that launched the label, to the meteoric success of artists like Luther Allison and Shemekia Copeland, Alligator Records has, in many ways, defined success in the blues world. Bitten by the Blues is an eye-opening look at one of the most popular independent blues labels in history.”

“Apart from the musicians themselves, few Chicagoans have done more for the genre—or witnessed more of its history from the inside—than Iglauer.”

“In what is simultaneously a coming-of-age story; an elegy for a bygone, grittier Chicago; and a case study on the many ways the color barrier was crossed musically in the mid-twentieth century, Iglauer and Roberts contextualize the blues’ story as America’s.”

“Iglauer and coauthor Patrick A. Roberts provide an enlightening view of the music-making process—from scouting talent to obscure clubs to the quest for originality in the studio to marketing and distribution.”

“You have to admire Bruce Iglauer’s dedication and persistence over the years. He acknowledges he’s a workaholic but he has also been meticulous in his control of every aspect of his business. He’s been tireless and inspired in building up his artist roster, moving away from his early obsession with Chicago artists and branching out, both following and helping to create new blues forms.”

“This is a book packed with a yearning nostalgia for a time and place which we British bluesers could only dream about. If you want to get to grips with the electrifying history of Chicago blues, you need this book—it’s a houserockin’ gem.”

“No book written today has told a more complete story of contemporary Chicago blues and its multitude of musicians as thoroughly as Bitten by the Blues. This is essential reading for any lover and collector of blues.”

“Bruce Iglauer's autobiographical history of Alligator Records is, in many ways, a story about technological change as much as it is about music. Yet, even more than a book about music or technology, at its heart, Bitten by the Blues is a business tale—the story of how a young college student started his own label to record his favorite musician, and ended up building a successful operation that not only provided for his family, but facilitated dozens of musicians being able to earn a living from their music. . . . Iglauer and his co-writer, Patrick A. Roberts, have written a history that is warmly conversational in tone, the equivalent of sharing stories with a good friend.”

“The book is a wealth of blues history that draws both from Iglauer’s encyclopedic knowledge of blues along with his vivid, personal experiences with legendary artists.”

“A fascinating look at one of the great independent record labels, and producers, of our time. For blues fans, this one has teeth.”

“In addition to being an enjoyable read for blues and Chicago enthusiasts, Bitten by the Blues reminds us that one’s passion can become one’s profession. Genuine Houserockin’ Music indeed.”

“Iglauer’s storytelling, his illuminating views of the artists he’s worked with, his straightforward recounting of the business—from recording to running the label, and deciding who to sign or drop—kept me going strong, finishing the highly readable book, coauthored by Patrick A Roberts, in just a couple sittings.”

“Iglauer imbues Bitten By The Blues with the same wit, humor, and charm that he evinces in person, and his larger-than-life personality shines through every page. . . .  Most importantly, perhaps, Bitten By The Blues reveals some of Bruce’s vision for the future of the label, a future that’s not carved in stone by any means, but is strengthened by the label’s discovery and development of young talents like Shemekia Copeland and Selwyn Birchwood as well as the addition of road-tested blues veterans like Tommy Castro, Nick Moss, and Tinsley Ellis to the label’s ever-evolving roster. Bitten By The Blues is an insightful and entertaining read for any blues music fanatic or anybody interested in the business of music. The only (admittedly minor) quibble I have with the book is that I’d loved to have seen more photos, but extra credit to Bruce for including a complete Alligator Records discography that we rabid collectors can use as a convenient shopping list. Grade: A+”