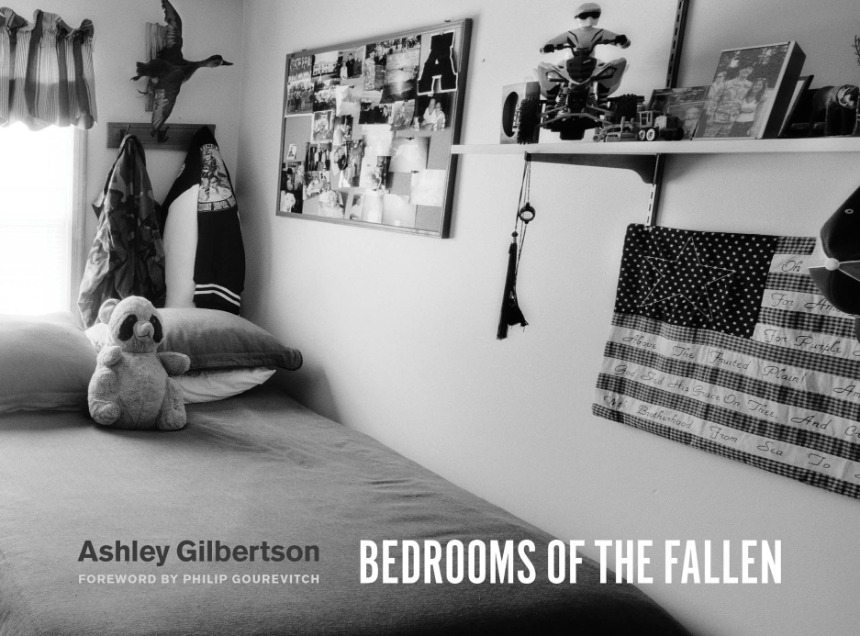 With a Foreword by Philip Gourevitch
For more than a decade, the United States has been fighting wars so far from the public eye as to risk being forgotten, the struggles and sacrifices of its volunteer soldiers almost ignored. Photographer and writer Ashley Gilbertson has been working to prevent that. His dramatic photographs of the Iraq war for the New York Times and his book Whiskey Tango Foxtrot took readers into the mayhem of Baghdad, Ramadi, Samarra, and Fallujah. But with Bedrooms of the Fallen, Gilbertson reminds us that the wars in Afghanistan and Iraq have also reached deep into homes far from the noise of battle, down quiet streets and country roads—the homes of family and friends who bear their grief out of view.
The book’s wide-format black-and-white images depict the bedrooms of forty fallen soldiers—the equivalent of a single platoon—from the United States, Canada, and several European nations. Left intact by families of the deceased, the bedrooms are a heartbreaking reminder of lives cut short: we see high school diplomas and pictures from prom, sports medals and souvenirs, and markers of the idealism that carried them to war, like images of the Twin Towers and Osama Bin Laden. A moving essay by Gilbertson describes his encounters with the families who preserve these private memorials to their loved ones, and shares what he has learned from them about war and loss.
Bedrooms of the Fallen is a masterpiece of documentary photography, and an unforgettable reckoning with the human cost of war.

"The need to see America’s twenty-first-century war dead, and to make them seen--to give their absence presence--has consumed Ashley Gilbertson for much of the past decade. Like it or not, these wars really are ours--they implicate us--and when our military men and women die in far off lands, they do so in our name. Gilbertson wanted to depict what it means that they are gone. Photographs of the fallen, or of their coffins or their graves, don’t tell us that. But the places they came from and were supposed to go back to--the places they left empty--do tell us."

“Equal parts haunting and hopeful, Gilbertson peers into the sacred spaces of fallen US soldiers to reveal the things they left behind.”