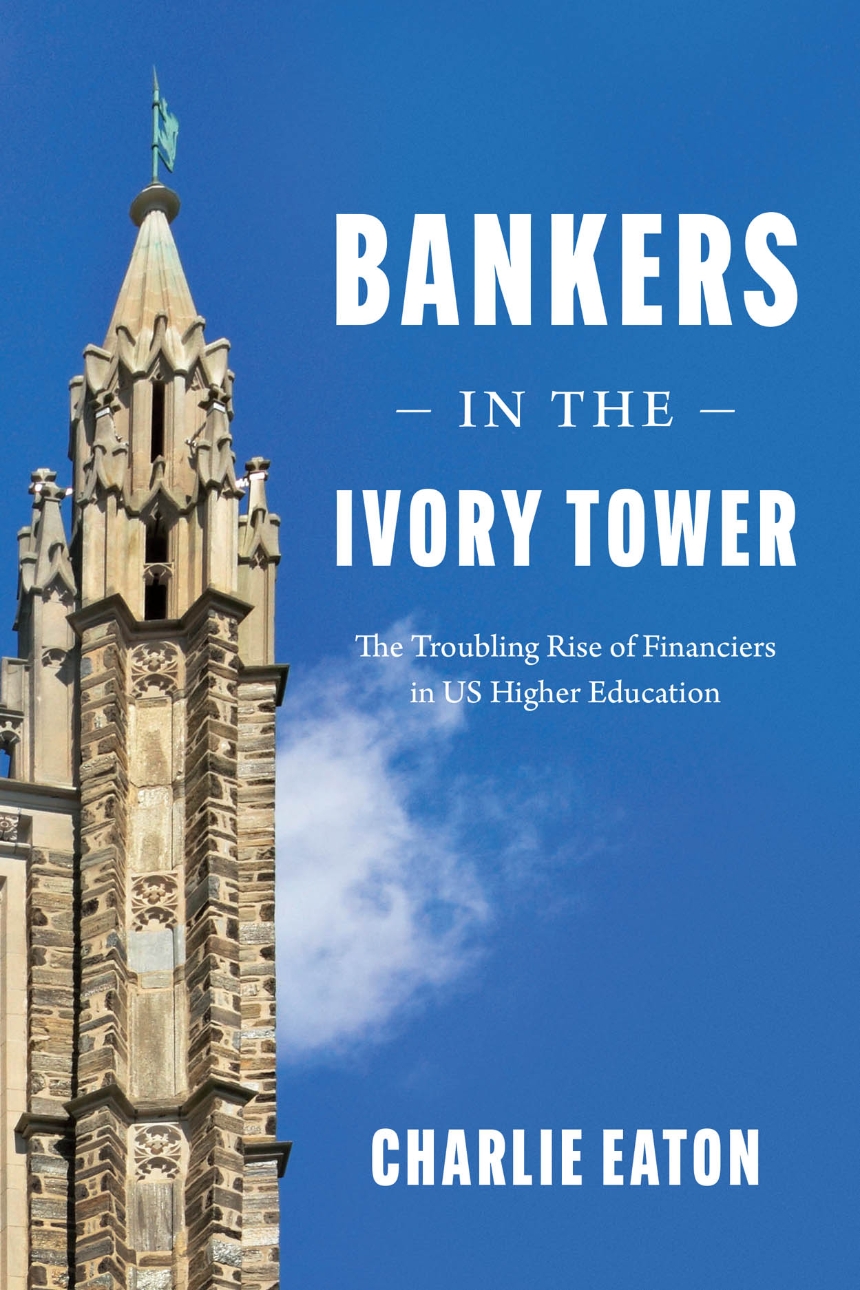 Bankers in the Ivory Tower

The Troubling Rise of Financiers in US Higher Education

Bankers in the Ivory Tower

The Troubling Rise of Financiers in US Higher Education

Exposes the intimate relationship between big finance and higher education inequality in America.

Elite colleges have long played a crucial role in maintaining social and class status in America while public universities have offered a major stepping-stone to new economic opportunities. However, as Charlie Eaton reveals in Bankers in the Ivory Tower, finance has played a central role in the widening inequality in recent decades, both in American higher education and in American society at large.

With federal and state funding falling short, the US higher education system has become increasingly dependent on financial markets and the financiers that mediate them. Beginning in the 1980s, the government, colleges, students, and their families took on multiple new roles as financial investors, borrowers, and brokers. The turn to finance, however, has yielded wildly unequal results. At the top, ties to Wall Street help the most elite private schools achieve the greatest endowment growth through hedge fund investments and the support of wealthy donors. At the bottom, takeovers by private equity transform for-profit colleges into predatory organizations that leave disadvantaged students with massive loan debt and few educational benefits. And in the middle, public universities are squeezed between incentives to increase tuition and pressures to maintain access and affordability. Eaton chronicles these transformations, making clear for the first time just how tight the links are between powerful financiers and America’s unequal system of higher education.

"The book is a vivid reminder of how rich, exclusive and small the US Ivy League universities are. . . . But the book shows, too, the importance of universities. They can be a means of entrenching privilege or of spreading
opportunity. A well-designed system for funding universities can be a crucial driver of social mobility. But in the US it is not working well."

"Bankers in the Ivory Tower offers a fascinating and data-driven investigation on how finance is transforming higher education in America for the worse. Instead of an engine of opportunity, it is becoming fuel for inequality with snowballing endowments for the top, student debt replacing public funding for the middle, and for-profit predation for the bottom. A must read."

"Until now, no one has connected the dots between ever-more-rarified Ivy walls, the expansion of predatory for-profit institutions, and the financialization of the US economy. With impeccable research, Eaton brilliantly shows that what happens at the top and what happens at the bottom (not to mention in the middle) are more closely connected than you think—and that the common thread is high finance."

“Many have criticized spending choices at colleges and universities and blamed them for both the rising cost of higher education and the corresponding, corrosive spread of student debt. But Eaton identifies the complex relationships that tie financial elites to these highly selective schools, which they and other wealthy families disproportionately attend. Financiers both advise and often help govern universities, guiding them to operate more like profit-seeking businesses, and financiers also function as intermediaries in the provision of student debt. The argument of the book makes the overrepresentation of socioeconomically privileged students on the nation’s most selective campuses look unsurprising and indeed, almost inevitable.”

“As elite colleges marvel at how sharply their multibillion-dollar endowments have risen from year to year, they fail to make the connection with the rise in for-profit colleges sinking students into high debt and low salaries. By following the investors, the hedge funds, the college governing boards, and the students whose lives they trample, Eaton shows how the financial oligarchy that descends from and upholds the Ivory Tower has taken the public out of our public goods. A sobering and fact-filled account with an unexpected glimpse into the possible.”

"A sobering look at how a generation of bankers transformed higher education, generating massive endowments for elite schools—and leaving a legacy of scarcity and debt for everyone else. Carefully researched and forcefully argued, Bankers in the Ivory Tower is essential reading for anyone who cares about higher education, school loans, or the social life of finance."

Acknowledgments
1. Universities and the Social Circuitry of Finance
2. Our New Financial Oligarchy
3. Bankers to the Rescue: The Political Turn to Student Debt
4. The Top: How Universities Became Hedge Funds
5. The Bottom: A Wall Street Takeover of For-Profit Colleges
6. The Middle: A Hidden Squeeze on Public Universities
7. Reimagining (Higher Education) Finance from Below
Methodological Appendix: A Comparative, Qualitative, and Quantitative Study of Elites
Notes
References
Index
Excerpt

Every fall as students return to college, the United States observes two relatively new rituals. First, higher education watchers and the media gawk at whether Harvard, Yale, or some other elite school added the most cash to its multibillion-dollar endowment in the previous year. Around the same time, and without a trace of irony, commentators debate the potential social consequences of the latest record-breaking growth in student debt.

The rise of wealthy college endowments and student debt have together contributed to increasingly obscene inequality in US higher education and in American society at large. While the most elite private universities typically have grown their endowments tenfold, they also have hoarded this expanding wealth by maintaining undergraduate enrollments close to 1970s levels. As a result, spending on education-related costs by the top ten schools in the US News & World Report rankings grew from an already high $50,000 per student in 1988 to more than $100,000 per student since 2010. This spending has primarily benefited students from privileged backgrounds who dominate admissions to the most elite private universities.

Beyond the Ivy League’s islands of wealth, the vast majority of students now leave college with the burden of student debt. This has not always been the case. In 1975, just one in eight students used student loans to pay for college. Scholars have only begun to unpack the social consequences of these debts. We do know, however, that student debt leaves borrowers at an economic disadvantage relative to wealthier students. This is because most wealthy students, including a supermajority of all students at elite private institutions, leave college debt-free. At Harvard, only 2 percent of undergraduates today take out any federal student loans at all.

Although researchers have begun to study the consequences of rising student debt, few have investigated what caused it. We have even less research to explain the growth of concentrated endowment wealth and its overwhelming use for the benefit of a privileged few. Observers also rarely recognize that these trends are connected. In Bankers in the Ivory Tower, I ask why and how these interwoven changes occurred.

The rise of student debt and bulging endowments is not just a story of inequality in higher education. As organizations that confer social rank, social connections, and claims to moral superiority, colleges have become ever more important as sites where people vie for status and resources. Consequently, colleges are microcosms for observing the causes and consequences of rising inequality in America and how they are inextricably tied to the resurgent power of financiers.

Even in comparison to other elites, financiers derive unusual power and profits from colleges and universities. As a result, colleges and financiers have played outsized roles in each other’s recent transformations. To explain how the two are linked, I start by tracing who financiers are and what financiers do.

Critically, financiers hold powerful economic roles as middlemen. (They remain overwhelmingly men, especially in high finance.) In myriad varieties of these middleman roles, financiers broker resource transfers between every corner of the economy, including universities and their students. Some key financier roles in higher education include those of commercial bankers who lend to students, hedge fund managers who oversee endowment investments, private equity partners who buy and manage for-profit colleges, and investment bankers who sell university bonds.

Both economists and popular critics have characterized financiers as unusually individualistic, cold, and calculating. As with all good lies, there is some truth in this contention. But financiers also collectively secure their wealth through an unparalleled web of intimate social ties to other elites. Sociologist Viviana Zelizer defines intimate ties as those that convey private information— from feelings we share with only an inner circle to a hedge fund’s internal investment plan. In contrast, impersonal ties share only public information, such as the interest rate for a student loan or the price of a stock in a for-profit college.

Scholars of elites have shown that prestigious universities have long been central nodes for financiers’ intimate ties. Financiers gain credentials, connections, and social status from their elite university education more than any other group of US economic elites. Among the four hundred wealthiest billionaires in America, 65 percent of private equity and hedge fund managers have bachelor’s degrees from the nation’s top thirty private universities. But among technology billionaires, the group with the second most elite degrees, only 36 percent are alumni of the top thirty private schools. This nexus between the Ivy League and high finance has helped maintain the sector’s top echelons as the nearly exclusive providence of the well pedigreed.

Compared to other elites, financiers derive more economic benefits from their university ties because financiers of all varieties trade formally and informally in private information. Financiers use private information to assess credit risks, evaluate potential investments, and solicit capital from investors. For example, hedge fund investor Tom Steyer learned from a friend at the 1988 Yale homecoming football game that Yale’s endowment manager David Swensen was beginning to make hedge fund investments. Steyer parlayed the tip into raising $300 million, a third of his initial capital, from Yale’s endowment. Tales like Steyer’s pepper the histories of America’s largest private equity and hedge funds.

Financial deregulation since the late 1970s and 1980s gave financiers more freedom to leverage intimate ties and private information for profit. This simultaneously made collegiate ties more valuable and opened new lines of business in the financing of higher education itself. Deregulation let financiers borrow, lend, invest, and trade with fewer restrictions and lower taxes on their profits. As a result, investors could borrow more to make bigger financial bets based on private knowledge. These financiers surpassed in prestige and influence the leaders of other dominant institutions, including government, industrial corporations, and universities. Scholars have referred to this growing power and centrality of financial markets as the financialization of society. As the US economy financialized, growing dependence on financiers induced even the leaders of nonfinancial institutions to adopt a financial logic: that money should always be allocated where it will yield the highest rate of return. University leaders have been no exception.

Just as transistors connect the varied segments of electronic circuits, financiers and their organizations connect the varied financial relations of billions of people around the world. For example, finance’s social circuitry wires the subordinate relationships of student loan borrowers to the investment fund managers that own for-profit colleges. But the circuitry also fuses more equitable interactions between university endowment officers and those same fund managers who invest in for-profit colleges. These complex connections often escape the comprehension of the people involved, including financiers. For proof of this incomprehension, consider that nearly all financiers and financial regulators failed to anticipate the collapse of the mortgage-backed derivative markets that connected homeowners to bond investors.