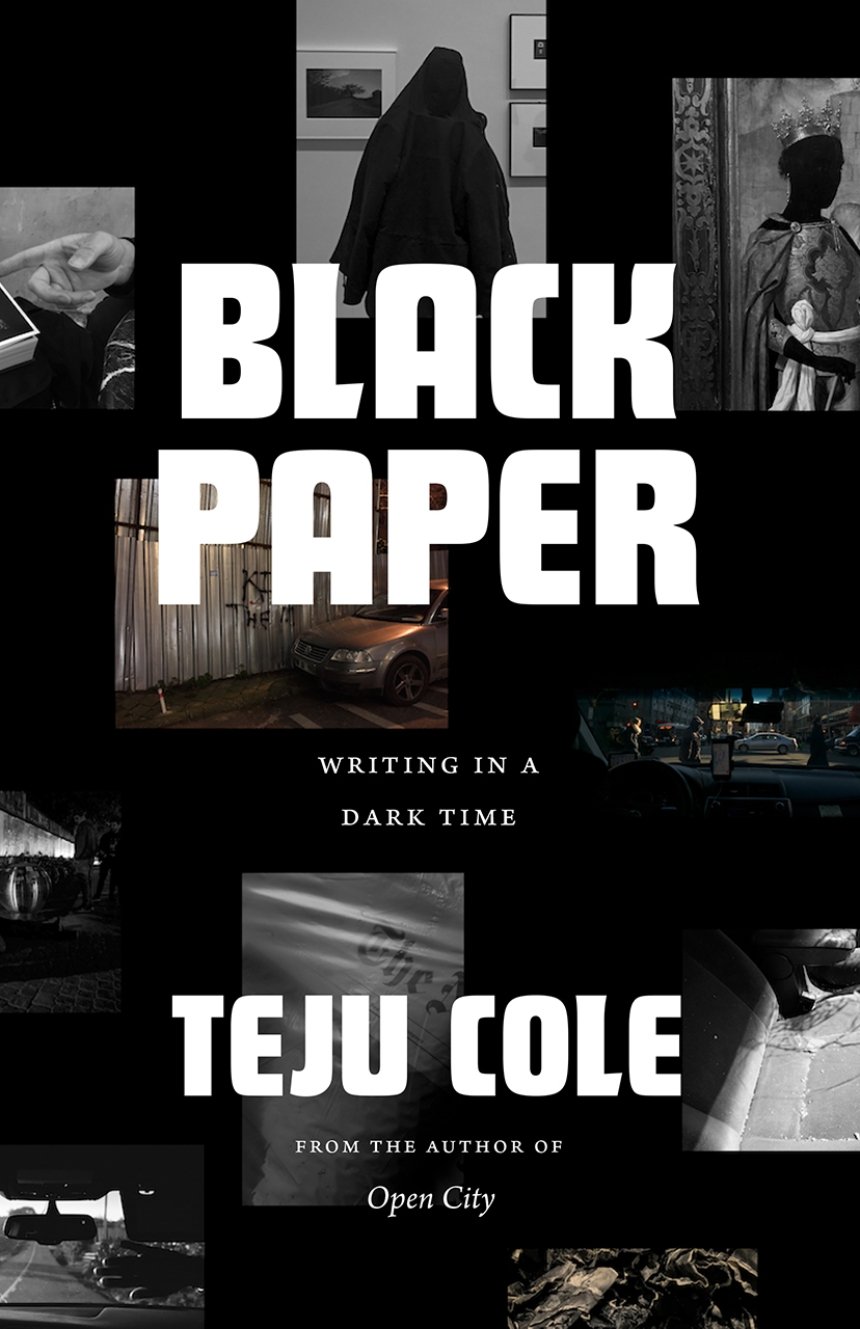 Writing in a Dark Time

Writing in a Dark Time

A profound book of essays from a celebrated master of the form.

“Darkness is not empty,” writes Teju Cole in Black Paper, a book that meditates on what it means to sustain our humanity—and witness the humanity of others—in a time of darkness. One of the most celebrated essayists of his generation, Cole here plays variations on the essay form, modeling ways to attend to experience—not just to take in but to think critically about what we sense and what we don’t.

Wide-ranging but thematically unified, the essays address ethical questions about what it means to be human and what it means to bear witness, recognizing how our individual present is informed by a collective past. Cole’s writings in Black Paper approach the fractured moment of our history through a constellation of interrelated concerns: confrontation with unsettling art, elegies both public and private, the defense of writing in a time of political upheaval, the role of the color black in the visual arts, the use of shadow in photography, and the links between literature and activism. Throughout, Cole gives us intriguing new ways of thinking about blackness and its numerous connotations. As he describes the carbon-copy process in his epilogue: “Writing on the top white sheet would transfer the carbon from the black paper onto the bottom white sheet. Black transported the meaning.”

"The celebrated author of Open City explores the ways we retain our humanity and different ways of thinking about the colour black."

"From scrutiny of a colonial-era photograph in 'Restoring Darkness' to 'Experience,' in which he considers human senses and our cultural understandings, Cole's engaging collection of essays reassembles the visual kaleidoscope of life now in sharp, exacting prose. Cole should be seen and attentively read."

“In this erudite collection of observations written over the past three years, art historian Cole meditates on art, identity, politics, and literature to decipher ‘the fractured moment in our history.’ . . . Offering a window into his articulate worldview, Cole brings into sharp relief the very humanity he seeks.”

“Dense and provocative, the essays in Black Paper are a reminder that darkness cannot last forever, and even within it, there is meaning and hope.”

“[Teju Cole is] an emissary for our best selves. He is sampling himself for our benefit, hoping for enlightenment, and seeking to provide pleasure to us through his art. May his realm expand.”

“The places he can go, you feel, are just about limitless.”

Dwight Garner, New York Times, on Every Day Is for the Thief

“He takes in news from African countries and American cities; but also, by necessity and interest, Asian, European and Latin American culture and history. In short, the world belongs to Cole and is thornily and gloriously allied with his curiosity and his personhood.”

“The forms of resistance depend on the culture they resist, and in our era of generalizations and approximations and sloppiness, Teju Cole’s precise and vivid observation and description is an antidote and a joy. This is a book written with a scalpel, a microscope, and walking shoes, full of telling details and sometimes big surprises.”

Part One
After Caravaggio

Part Three: Shadows
Gossamer World: On Santu Mofokeng
An Incantation for Marie Cosindas
Pictures in the Aftermath
Shattered Glass
What Does It Mean to Look at This?
A Crime Scene at the Border
Shadow Cabinet: On Kerry James Marshall
Nighted Color: On Lorna Simpson
The Blackness of the Panther
Restoring the Darkness

Part Five: In a Dark Time
A Time for Refusal
Resist, Refuse
Through the Door
Passages North
On Carrying and Being Carried


Two things were clear to me by the time I took a train the following morning along the Sicilian coast from Palermo—via Cefalù, Capo d’Orlando, Gioiosa Marea, and Barcellona, a succession of unfamiliar towns—to Messina. The first was that I could no longer separate my exploration of Caravaggio’s years in exile from what I was seeing around me in contemporary Italy: the sea was the same, the sense of endangerment rhymed. The second was that, after my stymied attempt to see The Martyrdom of Saint Ursula in Naples and the predictable disappointment of seeing the replica Nativity in Palermo, I was more than ready to stand in front of a real and great Caravaggio painting again. I got into a taxi at the station in Messina. The driver said, “So, you’re a football player?” I laughed. Indeed, what else could a young African headed to a hotel be? “No, I’m here to look at paintings by Caravaggio.” “Ah, Caravaggio,” he said, unconvinced. “Caravaggio. Great.”

In Messina I met up with Alessandra Coppola, a Neapolitan journalist who had agreed to be my guide in Sicily. After lunch, we walked around the city, which was unlike any I had seen in Italy: modest, modern, full of flat-roofed multistory buildings devoid of ornament. There was a good reason for this: an earthquake leveled Messina in December 1908, destroying 90 percent of its buildings and killing more than seventy thousand people in the surrounding area. The city that emerged in the aftermath was plainer and more rational than many other Italian cities its size. Many of the new buildings were designed to withstand future earthquakes.

In the late afternoon, Alessandra and I went to the Museo Regionale di Messina, a simple building on a rise near the strait that separates Sicily from the mainland. There were trees and marble antiques scattered about its grounds. We were visiting on a Wednesday afternoon, and almost no one was there. We felt fortunate as we moved through the silent galleries. Stepping into a large gray room, without fanfare or warning I found myself standing before The Raising of Lazarus. It hit me like a sudden gust of wind. I don’t know if I cried out, but I know I began to shake. I approached it, making sense of it as I moved closer—a harshly lit, frightening picture, an entanglement of limbs, some as yet unresolved drama—and as I did so, I saw that there was a second painting in the room, also by Caravaggio: his Adoration of the Shepherds. This was a quieter work, but it was also large and had its own force field.
I sat on a bench in the middle of the room, the two paintings set at a right angle to each other. I was awestruck, out of breath, caught between these two immensities. The very act of looking at an old painting can be so strange. It is an activity that is often bound up with class identity or social aspiration. It can sometimes feel like a diverting, or irritating, stroll among White people’s ancestors. It can also often be wonderful, giving the viewer a chance to be blessed by a stranger’s ingenuity or insight. But rarely, something even better happens: a painting made by someone in a distant country hundreds of years ago, an artist’s careful attention and turbulent experience sedimented onto a stretched canvas, leaps out of the past to call you—to call you—to attention in the present, to drive you to confusion by drawing from you both a sense of alarm and a feeling of consolation, to bring you to an awareness of your own self in the act of experiencing something that is well beyond the grasp of language, something that you wouldn’t wish to live without.
The Raising of Lazarus, painted around 1609, is dominated by the dark expanse in its upper register. Below, as though spotlit, is the scene of resurrection. At the center, stretched out in a diagonal, taut between death and life, is the pallid, almost greenish body of Lazarus. A man supports him, and his sisters mourn on the right side of the painting. On the left is the figure of Christ, with his head backlit, stretching out his right arm to summon life back into the dead man. Golden light is flecked over hands and faces, arms and legs.

I’ve always been moved by the story of Lazarus as it is recounted in the Gospel of John. The basic shape of the narrative is recognizable and relatable: someone dies, and the heartbroken family pleads for their loss to be reversed. In the case of Lazarus, Christ is so moved by the family’s grief that he interferes with the natural order of things and grants an exception like no other: he brings the dead man back to life. This makes it an exemplar of a kind of cosmic partiality, what we would all hope for at our most wounded and vulnerable. Caravaggio pins the scene down to its material facts: the confused faces of the onlookers, the downcast faces of the sisters, the necrotic body of Lazarus, the supernatural authority of Christ.

The drama that unfolds in The Adoration of the Shepherds is, by comparison, much quieter. What can one do with the stable where the infant Christ was born? Many artists cannot rise above the story’s fairy-tale baggage, but in Caravaggio’s hands, the narrative is brought alive again. The key, as usual, is his trust in realism: show what things look like, and the feelings will come. The painting is a pool of burnt umber, swirling around the placental red of the robes worn by the Virgin and one of the shepherds. This is no sweet family scene, but rather a document of roughness and need. Why should a newborn and his mother be in such a dirty place, barely protected from the elements? What corner of a refugee camp is this? Why do these people not have a home?
Caravaggio left Naples in 1607 and ended up in Sicily in late 1608, taking commissions in Syracuse, Messina, and probably Palermo. But between his time in Naples and his arrival in Sicily, he spent more than a year farther south, in Malta. He had to leave Naples for reasons that are not clear. Then, Caravaggio being Caravaggio, he had to escape from Malta after committing a crime there. And when he left Sicily, it was inevitably in a hurry, this time because he feared for his life. He went from Sicily back to Naples, and then began to make his way toward Rome. He was productive in those convoluted final years and months, but he was also harried and homeless. It isn’t hard to imagine that when he painted The Adoration of the Shepherds, he might have found himself in deep sympathy with the Holy Family. They were, after all, confronted with one of the simplest and most complicated of all human needs: a safe and decent place to spend the night.