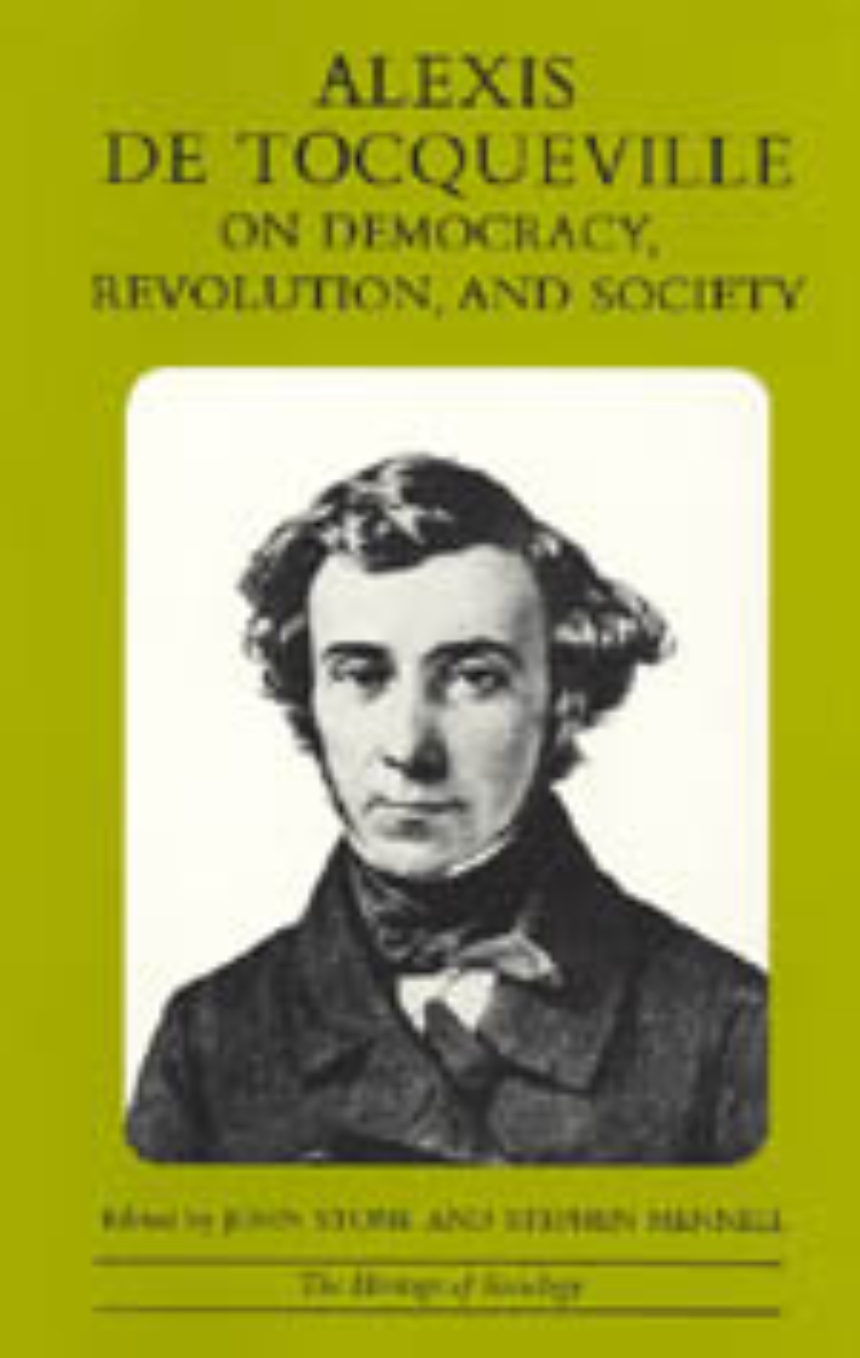 Edited by John Stone and Stephen Mennell
Alexis de Tocqueville possessed one of the most fertile sociological imaginations of the nineteenth century. For more than 120 years, his uncanny predictive insight has continued to fascinate thinkers, and his writings have continued to influence our interpretations of history and society. His analyses of many issues remain relevant to current social and political problems. In this volume John Stone and Stephen Mennell bring together for the first time selections from the full range of Tocqueville’s writings, selections that illustrate the depth of his insight and analysis.

Acknowledgments
Introduction by John Stone and Stephen Mennell
1. The Social Origins of Democracy
The Democratic Character of Anglo-American Society
The American System of Townships
Political Effects of Administrative Decentralization in the United States
The Distinctiveness of the American Federal Constitution
The Relative Importance of Manners, Laws, and Physical Characteristics in the Maintenance of Democracy
2. The Political Structure of Democracy
Political Activity in America
Political Associations in the United States
The Role of Secondary Institutions
Freedom of the Press
Political Functions of the Jury System
Political Functions of Religion
Political Functions of Education
The Tyranny of the Majority
3. Social Relations under Democracy
The Softening of Manners as Social Conditions became More Equal
How Democracy Makes Social Encounters among the Americans Simple and Easy
How Equality Divides the Americans into Numerous Small Social Circles
Associations in American Civil Life
How Democracy Affects the Relations of Masters and Servants
Democracy and the Equality of the Sexes
War and Democratic Armies
4. The Cultural Consequences of Democracy
Philosophical Method among the Americans
The Principal Source of Belief among Democratic Nations
Why the Americans Are More Addicted to Practical Than to Theoretical Science
The Spirit in Which the Americans Cultivate the Arts
Literary Characteristics of Democratic Ages
The Trade of Literature
The Effect of Democracy on Language
Characteristics of Historians in Democratic Ages
5. The Ancien Régime and the Origins of the French Revolution
The Nature of the Problem
How, Though Its Objectives Were Political, the French Revolution Followed the Lines of a Religious Revolution, and Why This Was So
What Did the French Revolution Accomplish?
Why Feudalism Had Come to Be More Detested in France Than in Any Other Country
Administrative Centralization under the Ancien Régime
How Paternal Government, as It Is Called Today, Had Been Practiced under the Ancien Régime
How in France, More Than in Any Other European Country, the Provinces Had Come under the Domination of the Capital City
How France Had Become the Country in Which Men Were Most Like Each Other
How, Though in Many Respects Similar, the French Were Split Up into Small, Isolated, Self-regarding Groups
How the Lot of the French Peasant Was Sometimes Worse in the Eighteenth Century Than It Had Been in the Thirteenth
6. The Dynamics of Revolution
How, Around the Middle of the Eighteenth Century, Men of Letters Took the Lead in Politics
How the Desire for Reforms Took Precedence over the Desire for Freedom
How Prosperity Hastened the Outbreak of the Revolution
How the Spirit of Revolt was Promoted by Well-intentioned Efforts to Improve the People’s Lot
How, Given These Facts, the Revolution Was a Foregone Conclusion
From the Revolution to Napoleon
7. The Revolution of 1848 and Its Aftermath
The Jury Monarchy: Triumph of the Bourgeoisie
The End of the July Monarchy
Causes of the February Revolution
The Class Character of Revolutions
Blunders of the Revolutionaries
Louis Napoleon’s Coup of 2 December 1851
8. Social Control: Individualism, Alienation, and Deviance
Social control under the Ancien Régime
Social Control in the New England Townships
Respect for Law in the United States
Anomie in France on the Eve of Revolution
Individualism in Democratic Countries
That Aristocracy May Be Engendered by Industry
A Manufacturing City—Manchester
Social Conditions in Ireland
Prisons: A Gresham’s Law of Crime
The Effects of Solitary Confinement
The Rehabilitation of Prisoners
The Effects of Degrading Punishments
How Much Crime Is There?
Criminal Statistics: Problems of International Comparison
9. Race Relations, Slavery, and Colonialism
Tocqueville versus Gobineau
Ethnic Stratification in Ireland
Race Relations in America
The American Indians
Blacks in America
Slavery in the French Colonies
Colonialism in Algeria
10. Tocqueville’s Prophecy: Centralization, Equality, and the Problem of Liberty
Future Prospects of the United States
Why Democratic Nations Show a More Enduring Love of Equality Than of Liberty
Why Great Revolutions Will Become More Rare
The Tendency towards Political Centralization
Democratic Despotism
Freedom: A Statement of Faith
Bibliography
Index