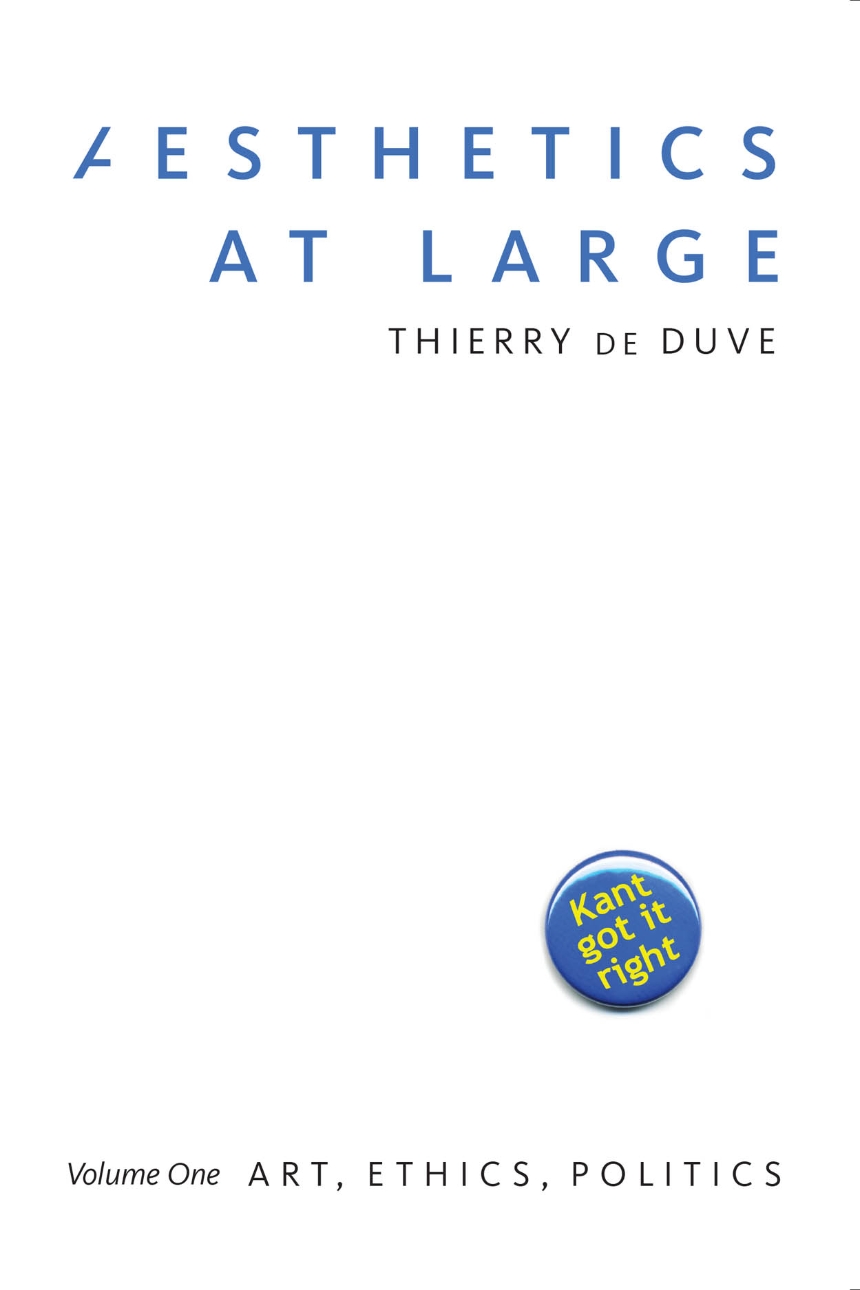 Immanuel Kant’s Critique of Judgment, Thierry de Duve argues in the first volume of Aesthetics at Large, is as relevant to the appreciation of art today as it was to the enjoyment of beautiful nature in 1790. Going against the grain of all aesthetic theories situated in the Hegelian tradition, this provocative thesis, which already guided de Duve’s groundbreaking book Kant After Duchamp (1996), is here pursued in order to demonstrate that far from confining aesthetics to a stifling formalism isolated from all worldly concerns, Kant’s guidance urgently opens the understanding of art onto ethics and politics.
Central to de Duve’s re-reading of the Critique of Judgment is Kant’s idea of sensus communis, ultimately interpreted as the mere yet necessary idea that human beings are capable of living in peace with one another. De Duve pushes Kant’s skepticism to its limits by submitting the idea of sensus communis to various tests leading to questions such as: Do artists speak on behalf of all of us? Is art the transcendental ground of democracy? Or, Was Adorno right when he claimed that no poetry could be written after Auschwitz?
Loaded with de Duve’s trademark blend of wit and erudition and written without jargon, these essays radically renew current approaches to some of the most burning issues raised by modern and contemporary art. They are indispensable reading for anyone with a deep interest in art, art history, or philosophical aesthetics.

"In this dazzling collection of essays distinguished by their uncanny combination of authority and accessibility, Thierry de Duve carries on the investigation begun in Kant after Duchamp—here revolving around the implications of Kant’s sensus communis for humanity as an aesthetic, ethical, and political community.  Whether discussing the post-Duchamp condition, Adorno’s problematic Hegelianism, the ethics of the contemporary museum, or the nature of conceptual and minimal art, de Duve establishes himself as possibly the most brilliant art theorist of our time—and certainly the most readable"

"We philosophers love to argue, and so when I say that de Duve offers a lot to argue with, I mean that as sincere high praise. . . . Like him, I do think that Kantian aesthetics provides the best way to understand contemporary visual art. That, need I say, is a controversial claim, and one that he defends with great persuasive force. For this reason, I look forward to rereading this pregnantly suggestive book and the three additional volumes that we are promised."

"The possibility of an ethical understanding of art shared by a community is presented as powerfully affirming for all. This first volume in the Aesthetics at Large set incorporates some previously published material and sustains Duve’s objective to make Kant newly relevant. This profound analysis is required reading for those interested in aesthetics and art theory. Some of the content will be appropriate for those who simply want to further their knowledge of aesthetics. The book also provides accessible discussion of minimal and conceptual art and postmodernism. . . . Recommended."

"Aesthetics at Large is a contemporary rereading of Kant’s third Critique. . . de Duve intends his ‘critique’ of art and aesthetic appreciation to issue in a recovery of a Kantian moral and political thesis apt for our own disturbing time. His proposal is too strong to be ignored: its importance lies in the recovery of the holism of cultural concerns, in a reasoned refusal to treat the aesthetic and the political as easily separated issues, in his novel vindication of the full power of Kant’s thesis for our time."

"Thierry de Duve claims that aesthetic sensitivity lays the ground for a universal commitment to ethics, fairness and justice, and their political expression in worldwide democracy. . . . We have already made some progress—as we can see and sense in our encounters with modern and contemporary art. De Duve encourages us all to engage with aesthetics at large and not to give up on the project of humanism."

Part I: The “Kant after Duchamp” Approach

1 Overture: Why Kant Got It Right

2 From Beaux-Arts to Art-in-General: A Bit of History

3 The Post-Duchamp Condition: Remarks on Four Usages of the Word Art

4 The Idea of Art and the Ethics of the Museum: A Candid Theory

5 Do Artists Speak on Behalf of All of Us?

Part II: Close and Not So Close Readings

8 Conceptual Art in Light of Kant’s Antinomy of Taste