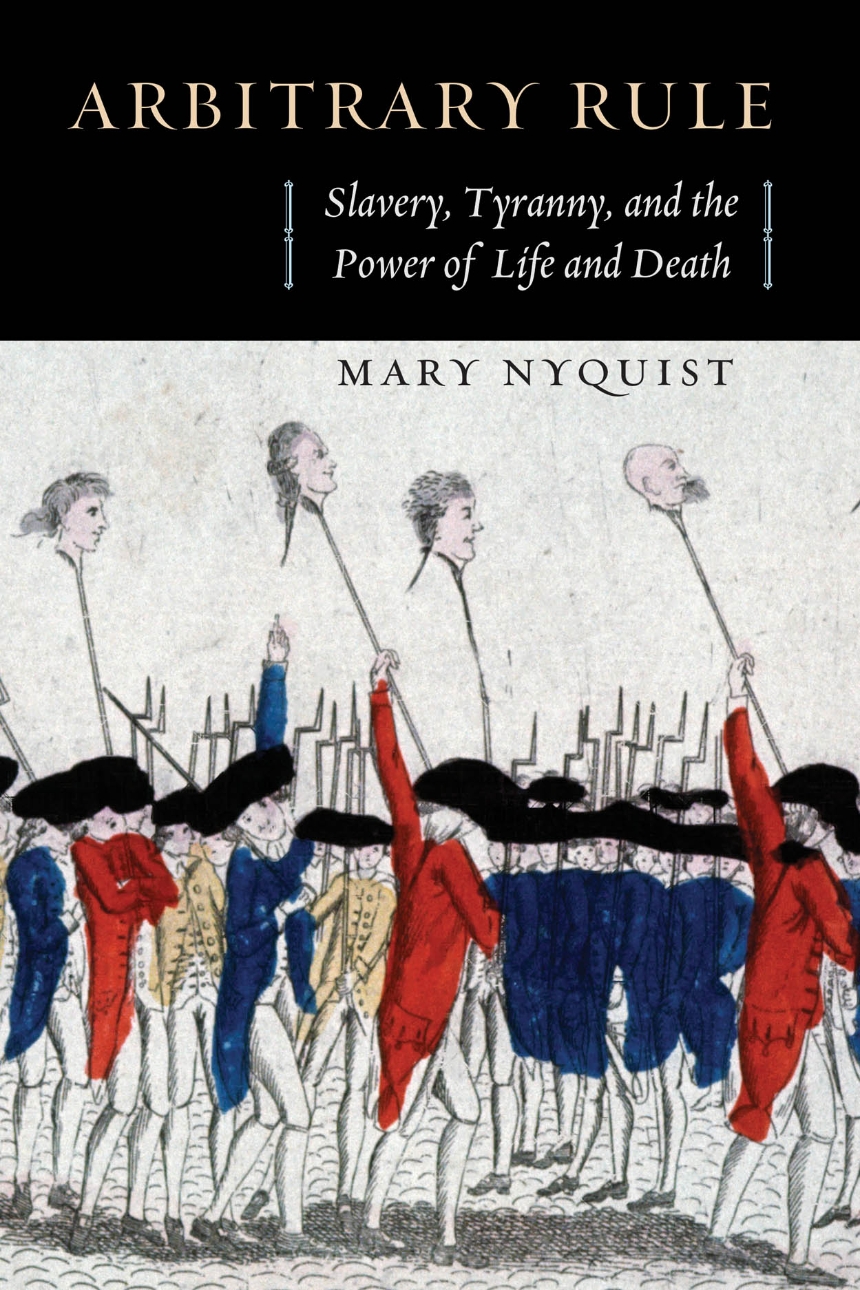 Slavery, Tyranny, and the Power of Life and Death

Slavery, Tyranny, and the Power of Life and Death

Slavery appears as a figurative construct during the English revolution of the mid-seventeenth century, and again in the American and French revolutions, when radicals represent their treatment as a form of political slavery. What, if anything, does figurative, political slavery have to do with transatlantic slavery? In Arbitrary Rule, Mary Nyquist explores connections between political and chattel slavery by excavating the tradition of Western political thought that justifies actively opposing tyranny. She argues that as powerful rhetorical and conceptual constructs, Greco-Roman political liberty and slavery reemerge at the time of early modern Eurocolonial expansion; they help to create racialized “free” national identities and their “unfree” counterparts in non-European nations represented as inhabiting an earlier, privative age.
Arbitrary Rule is the first book to tackle political slavery’s discursive complexity, engaging Eurocolonialism, political philosophy, and literary studies, areas of study too often kept apart. Nyquist proceeds through analyses not only of texts that are canonical in political thought—by Aristotle, Cicero, Hobbes, and Locke—but also of literary works by Euripides, Buchanan, Vondel, Montaigne, and Milton, together with a variety of colonialist and political writings, with special emphasis on tracts written during the English revolution. She illustrates how “antityranny discourse,” which originated in democratic Athens, was adopted by republican Rome, and revived in early modern Western Europe, provided members of a “free” community with a means of protesting a threatened reduction of privileges or of consolidating a collective, political identity. Its semantic complexity, however, also enabled it to legitimize racialized enslavement and imperial expansion.
Throughout, Nyquist demonstrates how principles relating to political slavery and tyranny are bound up with a Roman jurisprudential doctrine that sanctions the power of life and death held by the slaveholder over slaves and, by extension, the state, its representatives, or its laws over its citizenry.

“Nyquist’s book is impressively researched, persuasively argued, and clearly written. Anyone who is concerned with freedom, tyranny, and servitude in the modern or ancient world would do well to read Arbitrary Rule. For classicists, Nyquist records the influence and development of antiquity’s fundamental beliefs on these matters. For those interested in contemporary politics, Nyquist has clarified the origins of many of the political ideas that have shaped our modern world. Most significantly, Nyquist clarifies with great care and subtlety the intricacies of sixteenth and seventeenth century political thought with regard to freedom, servitude, and antityrannicism.”

“Nyquist’s Arbitrary Rule: Slavery, Tyranny, and the Power of Life and Death begins ambitiously with a broad survey of classical debates and culminates in careful close readings of Hobbes and Locke. . . . The groundwork that Nyquist provides in her earlier chapters (many of which glance forward to Hobbes or Milton) will be important and fascinating to a wide variety of readers of literature, history, philosophy, and the arts.”

"In the rank of those literary studies that aspire to be taken seriously by intellectual historians of political theory, this book is easily one of the most brilliant and transformative volumes that I have encountered in years. . . . In a wide-ranging but intensely focused and powerfully cumulative study, Nyquist uncovers both the utter unpredictability of the interrelations between political and legal slavery but also their tenacious and intense discursive interlockings in the theories of sovereignty and in arguments against tyranny from Aristotle to Locke."

“Offers a rich, intricately detailed account of numerous issues likely to engage and inspire readers in a multitude of fields, from political theory to literature, from radical race theory to colonial and postcolonialist discourses.”

“Arbitrary Rule is a remarkable book. It displays an impressive command of early modern literature and political thought, and throughout operates at a very high level of engagement and originality. It abounds in new perceptions and genuinely transforms the landscape of the period. I have no doubt that it will become a central focus of discussion for many years to come.”

“This daring interdisciplinary study effectively blends literary interpretation with historical and philosophical analysis. Through laying bare the nuances of antityrannical ideology, both ancient and modern, Arbitrary Rule arrestingly reveals the interconnections between liberalism, transatlantic slavery, and discourses on political servitude. Mary Nyquist’s imagination and sparkling intelligence shine through on every page.”

“Mary Nyquist has achieved a famous first: a mature, dispassionate examination of the discourse of ‘antityrannicism’ as exemplified in writings of both a theoretical and a literary nature ranging from Aristotle through Cicero, Buchanan, and Montaigne, to Milton, Hobbes, and Locke. Through her highly intelligent readings of authors with their own very different, indeed sometimes radically opposed, agendas, she shows brilliantly how the antityrannicism discourse could be deployed to sharpen the audience’s perception of the threat posed by tyranny to the privileges and dignity of a free community. As she rightly emphasizes, the interpretative challenges posed by ‘slavery’ used as a figure for distinctively political oppression have rarely been critically faced—she not only faces up to them but faces them down.”

"Nyquist...asks what political slavery, an image in anti-tyrannical polemic, has to do with chattel slavery. She argues that the use of such concepts in antiquity serves to create, in the early modern period, a sense of Europeans as free and non-Europeans as primitive."

"[Nyquist's] compelling project directs us to experience this literature anew, not as protagonists of the Western tradition of liberal democracy, but as skeptics attuned to its ambiguities and its ability to produce rival forms of argument, most notably with respect to the legitimacy of chattel slavery itself....The literary scholar’s exegetical skills merge with a lawyerly ability to show both the common ground and the distinctions between thinkers.....this is a brilliant, landmark, highly valuable book that should be read by historians of political theory, revolution, and slavery/antislavery."

"Mary Nyquist’s meticulously researched interdisciplinary study investigates the relation between the antislavery sentiments marking early modern English political writings and the Euro-colonial practice of enslaving Africans in the New World....Nyquist’s book will forever alter our thinking about the complex and surprisingly mobile relation between attitudes toward chattel slavery and the theorization of political rights. Insofar as collective political liberty is an ideal that we continue to defend, studies such as Nyquist compel us to ask: at whose cost?"

"It is common knowledge that slavery was considered antithetical to English identity in the early modern period. Mary Nyquist, however, shows us that 'slavery' is no simple thing, and Arbitrary Rule explores the even more complicated intersections of slavery, antityrannicism (a term Nyquist borrows from the classicist Kurt A. Raaflaub), absolutism, sixteenth- and seventeenth-century resistance literature, political philosophy, and colonialism."

"In Arbitrary Rule, Mary Nyquist has written an exceptionally good book—intelligent, learned, careful yet expansive, and above all useful—the best one can say of any book. It is also, as she herself notes, a timely study for our own era of rancid political rhetoric...Nyquist’s book offers a compelling study of an intellectual epoch generally recognized as the crucible of modern political practice and theory even as it documents the uneven movement of ideas in history, which can take hold with sudden fierceness or glacial inertia—but too often tragically for humankind."