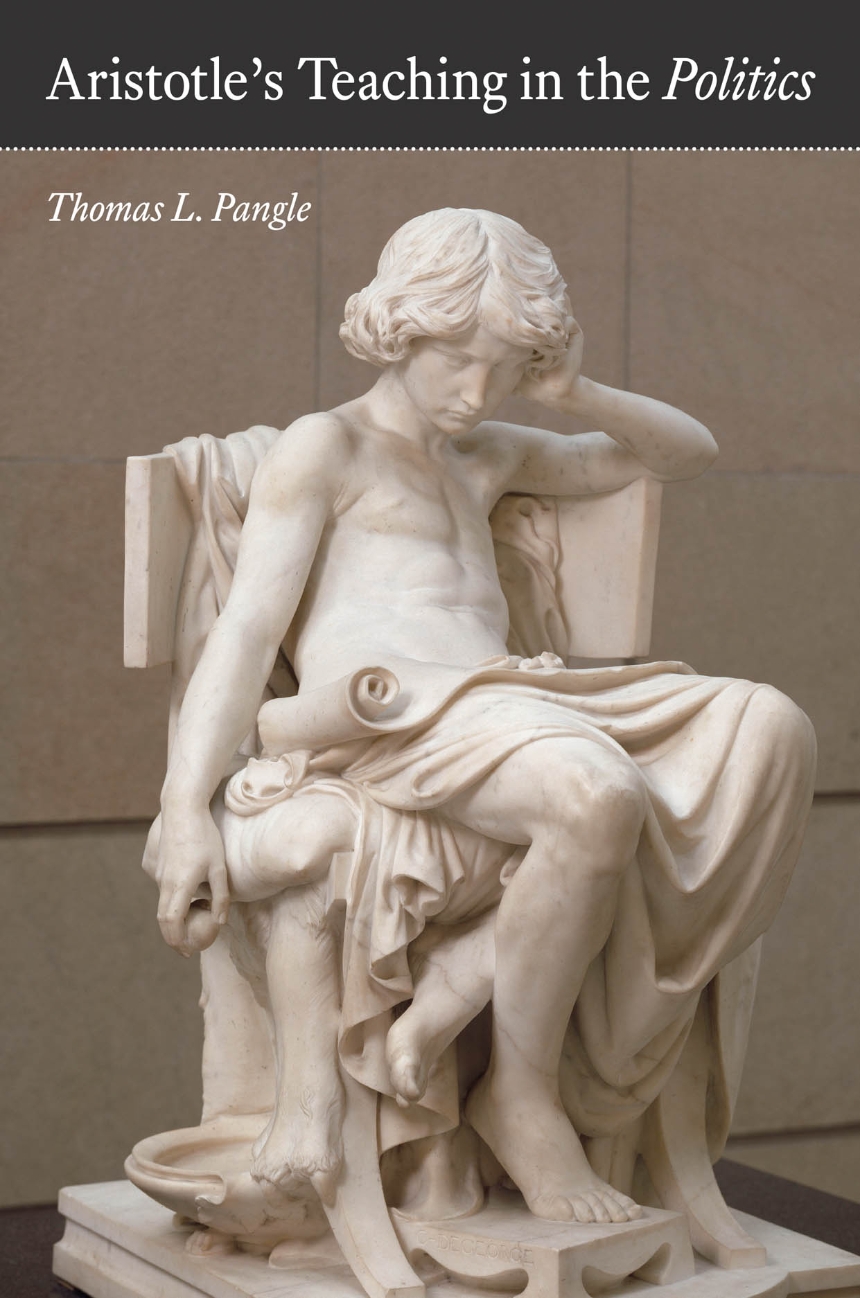 Aristotle’s Teaching in the "Politics"

Aristotle’s Teaching in the "Politics"

With Aristotle’s Teaching in the “Politics,” Thomas L. Pangle offers a masterly new interpretation of this classic philosophical work. It is widely believed that the Politics originated as a written record of a series of lectures given by Aristotle, and scholars have relied on that fact to explain seeming inconsistencies and instances of discontinuity throughout the text. Breaking from this tradition, Pangle makes the work’s origin his starting point, reconceiving the Politics as the pedagogical tool of a master teacher.

With the Politics, Pangle argues, Aristotle seeks to lead his students down a deliberately difficult path of critical thinking about civic republican life. He adopts a Socratic approach, encouraging his students—and readers—to become active participants in a dialogue. Seen from this perspective, features of the work that have perplexed previous commentators become perfectly comprehensible as artful devices of a didactic approach. Ultimately, Pangle’s close and careful analysis shows that to understand the Politics, one must first appreciate how Aristotle’s rhetorical strategy is inextricably entwined with the subject of his work.

“Thomas L. Pangle is an eminent political theorist whose interpretation of one of the fundamental books of the tradition will be widely welcomed. He employs, as always, an impressive range of scholarship, including not only the classical literature and most of the relevant contemporary scholarship, but an array of nineteenth-century scholars not often referenced or read. Aristotle’s Teaching in the ’Politics’ is fresh and full of insight.”

“A tour de force of textual exegesis and scholarly-philosophic engagement. This is the best book-length commentary on the Politics and among the best studies of Aristotle’s moral and political thought in general.”

“In recent decades, there has been an extraordinary wave of fine scholarship on Aristotle. It has therefore become increasingly difficult to write a new book on Aristotle’s Politics that is both original and good. Pangle’s commentary succeeds admirably. Through a careful exegesis, Pangle unpacks Aristotle’s text and illuminates the work’s multilayered rhetorical structure. . . . Understanding  the literary character of the work allows readers to clearly understand its substance. . . . Anyone with a serious interest in understanding Aristotle will benefit from, and enjoy, reading this book. Highly recommended.”

"Those who worry that esoteric readings drag us down through one obscure rabbit hole after another can rest reassured. Pangle’s pursuit of the details that reveal the arguments behind Aristotle’s arguments is admirably clear, well-informed, and intelligent."

“Pangle’s work stands out as an illuminating and clarifying interpretative approach to the important question which every studious reader of Aristotle’s Politics stumbles over.”

"Clearly a mature work of scholarship, informed by extended reflection on Aristotle's Politics and the subsequent tradition of political theory and philological commentary which has responded to it. . . . [Pangle's book] challenged me to look at the Politics in a light almost entirely unlike that which shines from contemporary Aristotle scholarship. Even if Aristotle may not always be the teacher Pangle claims he is—using clever rhetoric to provoke thought in his readers—Pangle himself often is.”

"The greatest feature of Pangle’s commentary is that, by detailed scholarly exegesis, it has brought an interpretative approach occasionally criticised for its gnostic tendencies into a wider conversation. Factions opposing this approach can now array their forces for fighting the hermeneutical battle which Pangle offers. If they take this offer of battle seriously, with due attention to the surface and the whole of the text, it may serve to clarify and reform many of the assumptions prevalent in the interpretation of Aristotle. Such a contest will only enrich our reading of Aristotle and help us to grasp the profundity of Aristotelian philosophical practice.”

“If you care about Aristotle, you will want to read Pangle’s Aristotle’s Teaching in the “Politics.” No other book on Aristotle is as well-versed in the existing scholarship, and no other book explicitly draws out as many perplexities from the political philosopher’s text with as much gusto.”

“A welcome addition to the literature…. Although not strictly a commentary, Pangle's work blends summary and analysis, and serious students of the Politics will want to consult each of its discussions.”

“A significant and accomplished work that deserves our careful reflection.”