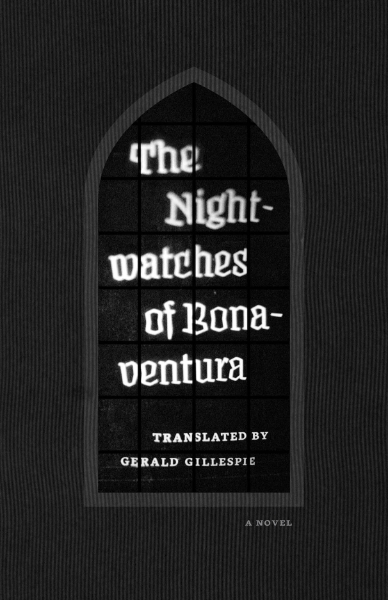 “Fans of upscale horror, postmodern literature, and literary analysis will find something to like in this unusual, fractured novel, first published in Germany in 1804. It unfolds as a series of spooky episodes, 16 ‘Nightwatches,’ told by a ringmaster and raconteur who refers to himself as a night watchman, a spectral and sometimes melodramatic figure—‘I’ve touched on my madcap deeds; but then the worst of them all is my life itself.’ In baroque, often murky prose, he shares dreams, observations both literal and philosophical, literary analyses, and dark tales reminiscent of Poe and Lovecraft.”– Publishers Weekly
Read more about the book
Buy this book: Nightwatches of Bonaventura
An Excerpt from
The Nightwatches of Bonaventura
by Bonaventura

The night hour struck; I wrapped myself in my quixotic disguise, took in hand the pike and horn, went out into the gloom, and called out the hour, afer I had protected myself against the evil spirits with a sign of the cross.

It was one of those uncanny nights when light and gloom alternate quickly and strangely. In the sky the clouds, driven by the wind, blew by like eccentric colossal figures, and the moon appeared and vanished in the swift change. Dead silence reigned below in the streets. Only high above in the air did the storm dwell like an invisible spirit.

That was all right by me, and I took pleasure in my lonely reverberating footsteps, for among the many sleepers I seemed to myself like the prince in the fairytale, in the enchanted city where an evil power had transformed every living being into stone, or like a lone survivor afer a universal plague or deluge.

The last comparison made me shudder, and I was cheered to see a single faint lamp still burning high up over the city in a free garret.

I well knew who ruled there so high in the airways. It was an unfortunate poet who was awake only in the night, because his creditors slept then, and the muses alone did not belong among the latter.

I could not refrain from delivering the following harangue to him:

“Oh you who are knocking about up there, I understand you well, for I was once of your kind! But I gave up this occupation for an honorable trade that nourishes its man and that is really in no way devoid of poetry for the person who knows how to discover this in it. I am placed in your pathway as if as a satirical Stentor and here below on earth regularly interrupt, with a reminder of time and transitoriness, your dreams of immortality that you dream up there in the air. We are truly both night watchmen; only it’s too bad that your vigils bring in nothing in these coldly prosaic times, whereas mine always yield something extra. When I was still poetizing in the night like you, I had to go hungry like you and sang to deaf ears; the latter I still do now, to be sure, but people pay me for it. Oh friend poet, he who intends to live nowadays should not make verses. If, however, singing is inborn in you and you absolutely cannot forbear, well then, become a night watchman like me. That is still the only solid post for which you’re paid and where people don’t let you starve. —Good night, brother poet.”

I looked up once more and became aware of his shadow on the wall. He had struck a tragic pose, his one hand in his hair, his other holding the page from which he was apparently reciting to himself his immortality.

Hold! There a sick man is awake—also in dreams like the poet, in true fever dreams.

All along the man was a freethinker, and, like Voltaire he is holding firm in his last hour. Then I see him through the peephole in the shutters. He gazes palely and calmly into empty nothingness, into which he intends to penetrate after an hour, in order to sleep forever the dreamless sleep. The roses of life have fallen from his cheeks but they blossom round about him on the faces of three gracious boys. Childishly innocent, the youngest frets before his pale, motionless visage, because it will no longer smile as it used to. The others stand observing soberly; they cannot yet imagine death in their fresh life.

In contrast, the young wife, with flowing hair and open, fair breast, looks despairing into the black grave and only now and again, as if mechanically, wipes the sweat from the dying man’s cold forehead.

Beside him the priest, glowing with anger, stands with raised crucfix to convert the freethinker. His speech swells mightily as a stream, and he paints the beyond in audacious pictures—not, however, the beautiful aurora of the new day and the budding arbors and angels, but, like a wild hellish Brueghel, the flames and abysses and the whole ghastly underworld of Dante.

In vain! The sick man remains mute and stubborn. With a frightful calm, he sees one leaf afer another falling and feels how the icy crust of death draws closer and closer to his heart.

The night wind whistled through my hair and rattled the decayed shutters like an invisible, approaching spirit of death. I shuddered. The sick man looked about with sudden strength, as if through a miracle he were speedily recovering and felt a new, higher life. This quick, bright flaring up of the already extinguishing flame, certain herald of imminent death, simultaneously casts a brilliant light into the night-piece set up before the dying man and shines, swiftly and for a moment, into the vernal world of faith and poetry. It is the double illumination in the Correggio night and fuses the earthly and heavenly ray into one marvelous splendor.

Firm and resolute, the sick man rejected the higher hope and thereby brought about a great moment. The priest thundered angrily into his soul and, like a desperate man, was now painting with tongues of fire and conjuring up all Tartarus into the final hour of the dying. The latter only smiled and shook his head.

I was in this moment certain of his endurance; for only the finite being cannot think the thought of annihilation, while the immortal spirit does not tremble before it, who—a free being—can freely offer himself to it, as Indian women boldly hurl themselves into the flames and dedicate themselves to annihilation.

A wild madness seemed to grip the priest at this sight, and true to his character, he now spoke—since descriptions appeared too feeble to him—in the person of the devil himself, which suited him perfectly. He expressed himself as a master in this role, genuinely diabolical in the boldest style and far from the weak manner of the modern devil.

It became too much for the sick man. He turned away gloomily and looked at the three spring roses that bloomed around his bed. Then the whole hot love flared up for the last time in his heart, and a light redness rushed over his pale visage like a memory. He had the boys held up for him and he kissed them with effort; then he laid his heavy head on the woman’s agitated breast, uttered a gentle “Oh!” that seemed more bliss than pain, and fell asleep lovingly in the arms of love.

The priest, true to his devil’s role, thundered into his ears—in accordance with the observation that in the case of deceased persons the hearing faculty still remains sensitive a rather long time—and promised him firmly and bindingly that the devil would claim not only his soul but also his body.

With this he burst forth onto the street. I had become confused, in the deception held him truly to be the devil, and set the pike at his breast as he wished to pass by me.“Go to the devil!” he said, snorting. Then I gathered my wits and said, “Pardon, reverend sir. In a kind of possession I held you to be Himself, and for that reason set the pike at your heart, as a ‘God-be-with-us.’ Excuse me for this once!”

Oh! There in the room the scene had become more lovely. The fair wife held the pale beloved quietly in her arms like a slumberer; in fair ignorance she did not yet suspect death and believed that sleep would strengthen him for new life—a sweet belief, which did not deceive her in the higher sense. The children kneeled earnestly at the bed, and only the youngest endeavored to wake their father, while their mother, beckoning to him silently with her eyes, laid her hand on his curly head.

The scene was too beautiful; I turned away in order not to see the moment in which the illusion vanished.

With muted voice I sang a dirge under the window in order, through gentle tones, to supplant in the still hearing ear the monk’s cry of fire. Music is kindred to the dying; it is the first sweet sound of the distant beyond, and the muse of song is the mystical sister who points the way to heaven. So Jacob Boehme passed away, while listening to the distant music that none but the dying hear.