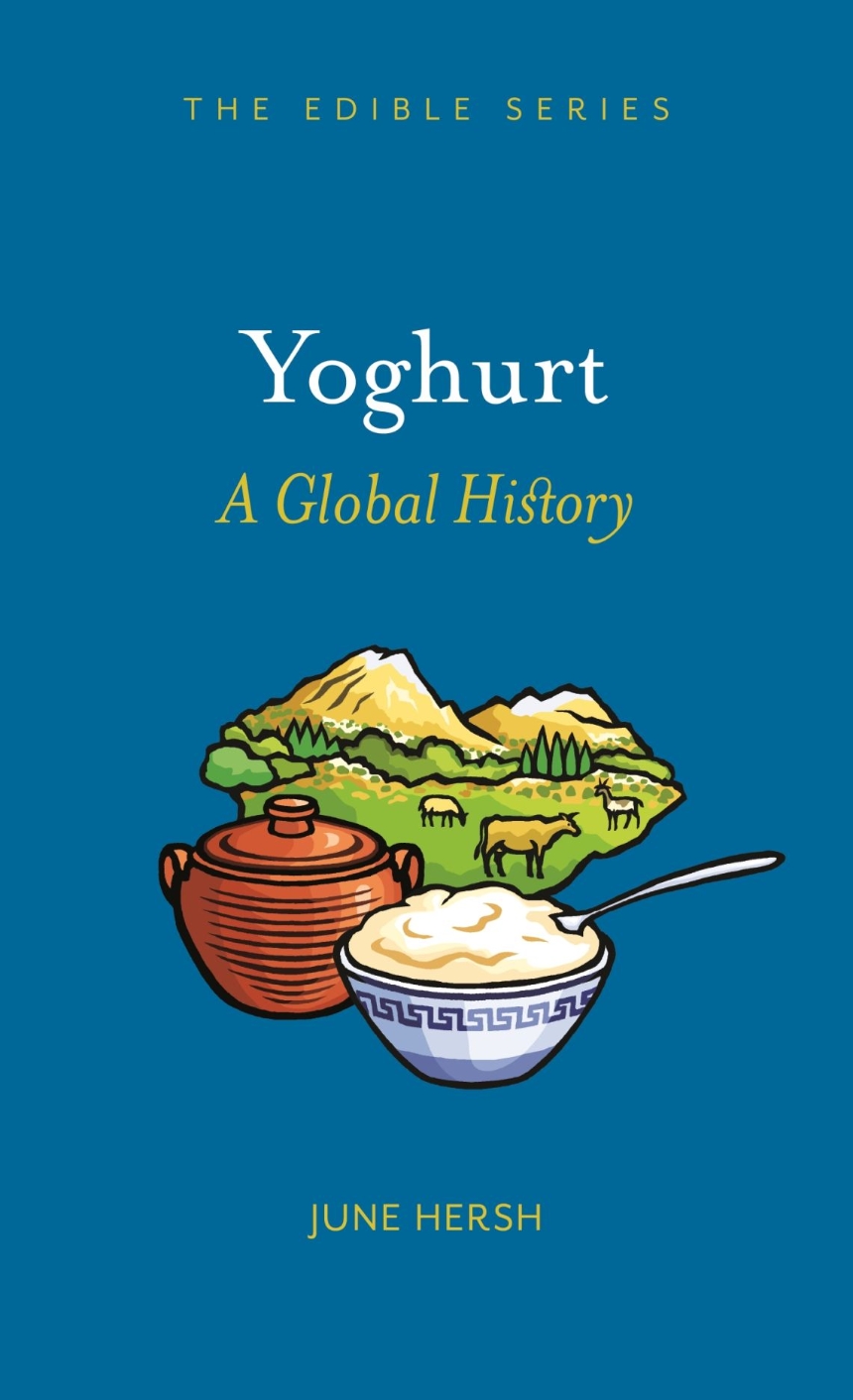 Yoghurt: A Global History is a fascinating look at the rich history of yoghurt, from its earliest awakenings in Neolithic times to the modern-day culinary phenomenon it has become. The book delves into its nutritious properties, analyzes worldwide consumption, and explores the new developments in yoghurts, including non-dairy varieties, on-the-go options, and its impact in China, Europe, and North America. Highlighting scientific studies and offering practical guidance, June Hersh helps us better understand the plethora of yoghurt products available. She also provides step by step instructions on how to make foolproof homemade yoghurt, as well as mouthwatering international recipes.

“In Yoghurt: A Global History, Hersh teaches yoghurt lovers how one of the world’s oldest and healthiest foods has evolved from an exotic ingredient to a valuable staple in kitchens from East to West!”

Jennifer Abadi, author of "Too Good to Passover"

“Hersh’s remarkable book teems with millions of microbes of knowledge about an ancient and vital food.”

Few foods can claim to have been consumed as early as 10,000 BCE and to have sustained enough popularity in the thousands of years since to remain a kitchen staple today. Even fewer could be called plain, tart or sour and have those pejorative terms considered to be compliments. However, those statements hold true for one of the world’s oldest fermented foods: yoghurt.

Yoghurt is one of the most pliable and versatile foods, serving not only as an ingredient or condiment, but as a stand-alone meal. It can be eaten at breakfast, lunch or dinner and makes for a healthy snack and delectable dessert. It pairs well with both savoury and sweet add-ins and is enjoyed across the globe with a spoon, a straw or as a frozen confection. It is simple to prepare at home and, for some, making it is a ritual of weekly practice. It has proven health claims that take it from being a super food, which has nutritional benefits, to a functional food with a bonanza of value-added characteristics. Yoghurt is feeding and fuelling populations in every corner of the world with the nutrient-dense benefits of milk, without the side effects suffered by those who are lactose-intolerant.

To better understand the impact of yoghurt, you need to understand its healthy characteristics. As Robert Hutkins explains in his book Microbiology and Technology of Fermented Foods (2006), when a food is fermented, as yoghurt is, its raw materials are converted through the action of microbes. Microbes are what transform grapes into wine or soybeans into tempeh and miso. What makes these fermented foods so valuable are the billions of live microbes, good bacteria that you are ingesting and introducing to your gut. Because these microbes confer a benefit to the host, they are considered ‘probiotic’ (from the Greek word for ‘life’). And while, Hutkins admits, they are often merely visitors, when consumed regularly, they can compete with bad bacteria, produce vitamins and help modulate your immune system.

Yoghurt was a transformative food for Neolithic people and became the foundation of many of the world’s first collective communities. While Neolithic people undoubtedly didn’t have the level of sophistication needed to understand the complex process of fermentation, they found that when they ate foods such as yoghurt, they felt better and stronger. It is no surprise, therefore, that yoghurt is mentioned and revered in the ancient religious scripts of almost every world religion, is the subject of exhaustive archaeological findings and can be found in the theoretical writings of classical Greek and Roman scholars.

As it proliferated in the diet of many residing in Central Asia, yoghurt became an important ingredient during the Golden Age of Islam, and recipes featuring it were integral to the world’s oldest cookbooks. In the late 1800s and early 1900s, yoghurt became the focus of many scientific studies, and the prescient writings from ancient scientists were being tested and proven in labs throughout the world. When yoghurt’s health halo was firmly affixed, it was the topic of news stories across the globe, and yoghurt for medicinal purposes was all the rage. The twentieth century saw yoghurt move from a pharmaceutical product to an indispensable member of the supermarket dairy aisle as manufacturers seized on its momentum and ushered in the age of yoghurt’s commercialization.

Yoghurt wars between major producers in the late twentieth and early twenty-first centuries were hard-fought, and consumers then had a plethora of choices and varieties to choose from. In 2016 yoghurt sales worldwide reached U.S.$77 billion, and are forecast to top $100 billion by 2023. Major yoghurt producers recognize that consumers today are looking for the most probiotic bang for their buck, with new and interesting flavours, plant-based alternatives and varieties designed for fast-paced lifestyles. These factors appeal especially to a burgeoning Chinese and Southeast Asian market. Numerous studies point to yoghurt’s health benefits and consider it a signature foodstuff for a healthy diet and lifestyle. Compared with those who do not eat yoghurt, yoghurt eaters are ‘generally healthier, leaner, more highly educated and of a higher socio-economic status’.1 Studies go on to show that yoghurt eaters are more likely to be women, to read labels, to be more physically active and more aware of the links between food and health, while less likely to smoke or drink or go to fast food restaurants. If that isn’t enough, they tend to have an overall better health-related quality of life and mental-health outlook. Scientific studies into the health benefits of yoghurt additionally find a positive correlation between yoghurt consumers and a lower risk for cardiovascular disease, type 2 diabetes and obesity. Today’s yoghurt eaters want indulgence without guilt, the choice of their daily fix of dairy or wholesome nutrition without animal products and, of course, sweetness without sugar. As a BBC news report observed, ‘In half a century, the humble yoghurt has gone from hippy health food to mass market phenomenon, triggered a functional food revolution and became a multi-billion-pound industry.’ How amazing to think that an ancient global food phenomenon is still thriving and expanding to satisfy such a growing market demand across the world.

Back to the Future

We only have to go back to the Neolithic period, or New Stone Age, the final stage of cultural evolution and technological development among prehistoric humans, to trace the roots of the functional food that is yoghurt. It is believed that Neolithic people between 10,000 and 6500 BCE in Anatolia (modern-day Turkey) were moving from a hunter-gatherer society towards dairy farming and domesticating animals.

Camels, yaks, cows, horses, llamas, sheep and goats once valued for their meat were now being utilized to provide sustenance through milking. Early people found themselves with an abundance of fresh milk, but there was just one problem – they were lactose-intolerant. Luckily for them, Mother Nature donned her white lab coat and created protocooperation, an organic synergy between the forces of heat and bacteria, working together to convert milk into an easily digestible source of nourishment. She took fresh milk – chock-full of protein and calcium as well as phosphorous; riboflavin; vitamins B6, B12 and D; potassium and magnesium – and inoculated it with the bacteria that were ever-present in the environment. She then brought the sunshine, which created enough heat to activate the good bacteria and, like Pac-Man, they consumed the lactose (natural milk sugar), created lactic acid and fermented the milk. The milk proteins broke down (denatured) and then over time came back together and coagulated. Her chemistry experiment created an entirely new food packed with live and active healthy microorganisms, with a tart and tangy flavour and a thick and curdled texture. That is why most consider the word ‘yoghurt’ to be derived from the Turkish word yoğurmak, which translates as ‘thickened, curdled or coagulated’.

So how did Neolithic man learn to harness the power of Mother Nature to create yoghurt? It was more a serendipitous effort than a learnt one, with two viable theories. The first suggests that herdsmen stored milk from their freshly milked animals in bags fashioned from intestinal gut. Over time, the natural bacterial enzymes in these bags fermented the milk and created yoghurt. A second theory posits that the earliest dairy farmers would store their fresh milk in containers that sat in the hot sun. Bacteria from nearby trees and plants infiltrated the milk and, as evolutionary geneticist Mark Thomas noted, ‘if you milked a cow in the morning . . . in the Near East by lunchtime [the milk] would have started to ferment into yogurt.’1

This remarkable discovery of how to convert milk into a near-lactose-free, long-lasting and nutrient-dense food source was considered by scholars such as Joachim Burger, an evolutionary anthropologist at the University of Mainz in Germany, to be ‘a transformative development in human history’. Burger initiated the EU project BEAN (bridging the European and Anatolian Neolithic) and in that context stated, ‘The processing of milk to make cheese and yogurt contributed significantly to the development of dairy farming . . . making a valuable foodstuff available to the human population.’2

There is concrete, or should we say, ‘clay’ evidence showing that the Neoliths were fermenting their milk and achieving a high level of sophistication with their overall culinary skills. Julie Dunne, an archaeological scientist at the University of Bristol, studied residue on 81 ancient pottery remnants from the Libyan Sahara and found ‘the chemical signatures were unambiguously from animal fats’. They were able to identify the remains of dairy products made from the milks of cows, goats and sheep dating as far back as 5000 BCE. This finding confirms the theory that vessels were certainly being used to hold milk and that as far back as Neolithic times, those not possessing the genetic mutation to digest milk were likely making cheese and yoghurt rather than drinking milk directly from their animals. Andrew Curry takes this one step further, in his article entitled ‘Archaeology: The Milk Revolution’, citing another find near central Poland on which archaeologists came across fragments suspected to have been left behind by some of Europe’s oldest farmers. The pottery was dotted with tiny holes as if the clay had been deliberately perforated. Geochemists from the UK examined the pieces and found signatures of milk fat, which they extrapolated to mean that these ancient dairy farmers were not only storing milk to ferment but had developed a method of separating curd from whey (the yellowish liquid that remains after the formation of curds), thereby turning their milk into yoghurt or cheese.