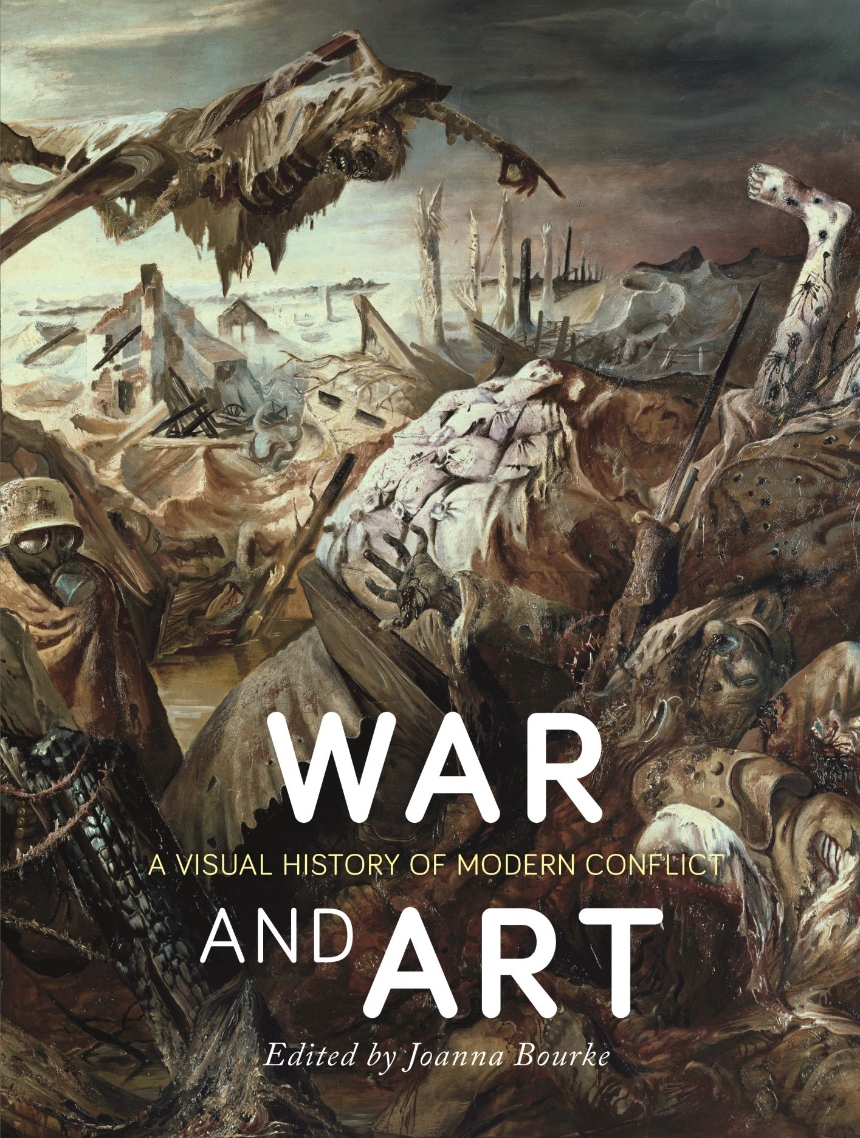 A Visual History of Modern Conflict

Edited and with an Introduction by Joanna Bourke

A Visual History of Modern Conflict

Edited and with an Introduction by Joanna Bourke

In times of crisis, we often turn to artists for truth-telling and memory-keeping. There is no greater crisis than war, and in this sumptuously illustrated volume, we find a comprehensive visual, cultural, and historical account of the ways in which armed conflict has been represented by artists.

Covering the last two centuries, from the Crimean War to the present day, the book shows how the artistic portrayal of war has changed, from a celebration of heroic exploits to a more modern, troubled, and perhaps truthful depiction of warfare and its consequences. The book investigates broad patterns as well as specific genres and themes of war art, and features more than 400 color illustrations by artists including Paul Nash, Judy Chicago, Pablo Picasso, Melanie Friend, Marc Chagall, Francis Bacon, Käthe Kollwitz, Joseph Beuys, Yves Klein, Robert Rauschenberg, Dora Meeson, Otto Dix, and many others. The volume also highlights the work of often overlooked artists, including children, non-Europeans, and prisoners of war. A wide range of subjects, from front-line combat to behind-the-lines wartime experiences are represented in paintings, etchings, photography, film, digital art, comics, and graffiti.

Edited and with an introduction by Joanna Bourke, War and Art features essays written by premier experts in the field. This extensive survey is a fitting and timely contribution to our understanding of art, memory, and commemoration of war.

"[A] fascinating and beautifully illustrated book."

“War and Art offers a visual, cultural, and historical account of depictions of war and its aftermath over the past two hundred years. The artists and representations cross a variety of media—from paintings, prints, and photography, and comics to film, digital art, and graffiti—In an effort to visualize war, memory, commemorative actions, and outcomes. . . . Richly illustrated with more than four hundred illustrations and including notes for each essay and a brief bibliography of about fifty sources, the volume will be of interest to readers in history, art history, military history, ethnic and cultural identity, memory studies, and related fields of material and cultural heritage. . . . Recommended.”

"This is a large, abundantly well-illustrated book. . . . Recommended for all academic libraries."

"The traumas and tragedies of war should never be underestimated or forgotten. They change lives—combatants' and noncombatants'—in unimaginable ways with far-reaching and generational effects. Artists provide visual representations and reminders of the scope and horrors of war. The platitude 'a picture is worth a thousand words' is vividly reaffirmed in War and Art. The book surveys war art of the last two centuries, from the Crimean War through the conflicts in Iraq and Afghanistan. . . . War and Art is an ambitious and captivating survey of the art and commemoration of war. Its readers will not be disappointed."

“Through the angle of a visual history embracing a wider specter, the book reviews canonical artworks, children’s drawings, video games, and mural paintings in abandoned fortifications. . . . Bourke also encourages us to question the political and ideological dimensions of war.”

"It is salutary that one of the leading historians of war and violence, Bourke, whose work defined how these concepts are thought of in relation to gender, emotions, and the body, sought to redress such issues through the prism of visual culture. The result is a large, lavishly illustrated tome expertly edited by Bourke, with sixteen chapters by as many scholars. . . . The book has an impressive arc and span: a survey, reader and primer, all-in-one. . . . War and Art stands out for the way in which it brings together a heterogeneous range of artistic practices and visual modalities—from oil painting to aircraft fuselage, feature films to drone images, embroidery to virtual reality. This rich span allows it to make historical sense of the endless complexity of forms, ideologies, discourses, and ends to which art lends itself in relation to war, as well as to give readers a fuller account of the different subject positions involved. This comprehensive volume, ambitious in scope and scale, is a welcome addition to the literature and a reference point for why visuality matters to the humanities as never before."

"I could easily make this the shortest review ever: just buy the book, read it, look at it. You will seldom if ever find a book on art as worthwhile and as necessary as this one."

“This exciting collection of original and beautifully illustrated essays is essential reading for anyone interested in the visual representation of war in the nineteenth and twentieth centuries.”

“This ambitious volume will be a landmark in the study of war as well as in visual culture studies.”

“What happens when you encourage a group of archivists, archaeologists, anthropologists, and historians of all sorts into the terrain of war art? An extraordinary collection, exhilarating in its ways of seeing, consistently moving in its attention to artists and the audiences—soldiers and statesmen; men, women, and children—for war’s pity and terror.”

“Beautifully illustrated and covers everything from the often neglected role of women artists to the strange decorations found in Cold War bunkers; from the works of some of the most notable war artists to questions about history and memory. It is a must-read for anyone interested in the art of war, and in our complex human responses to the violence of conflict and the commemoration of battle.”

Alexandra Richie, author of "Faust's Metropolis: A History of Berlin" and "Warsaw 1944: Hitler, Himmler, and the Warsaw Uprising"

HISTORIES
War Imagery between the Crimean Campaign and 1914
The Two World Wars
In the Heat of the Cold War, 1945-77
Contemporary War; Contemporary Art

ARTISTS
Kiyochika’s Last Laughs: Satirical War Prints form the First Sino-Japanese (1894-5) and Russo-Japanese (1904-5) Wars
‘In front of me is the war, and I battle with it with all my strength’: The Wars of Vasili Vereshchagin and Natalia Goncharova
‘The most gruesome picture ever painted’: Otto Dix and the Truth of War
Kathe Kollwitz and the Art of War
‘A concentrated utterance of total war’: Paul Nash, C.R.W. Nevinson and the Great War
I Do (Not) Challenge: Nancy Spero’s War Series
‘My Name is David and I will be your war artist for the day’: David Cotterrell Shoots a Video

CONTEXTS
Drawn in Blood and Bone: The Art of Captives of War
The Crayon War: How Children Drew the Great War
Rape in the Art of War
Video Games, War and Operational Aesthetics
Art Against War