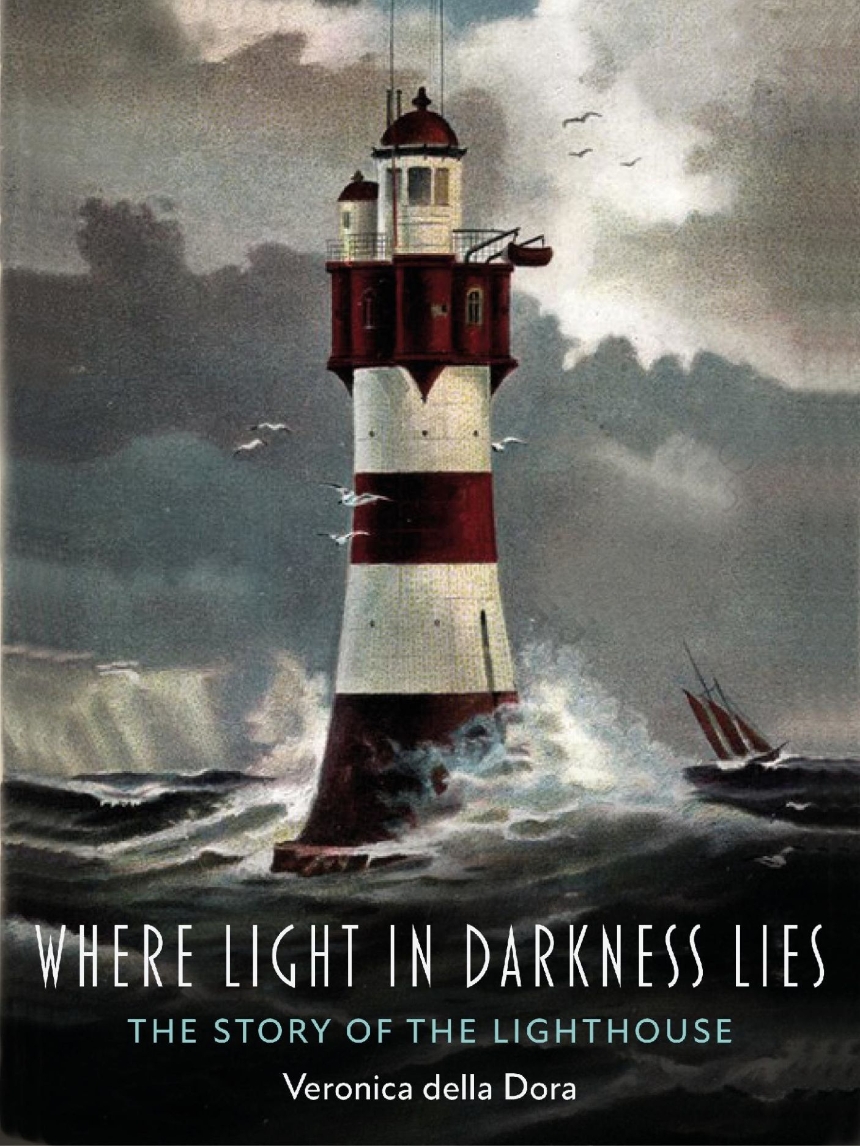 Where Light in Darkness Lies

The Story of the Lighthouse

Where Light in Darkness Lies

The Story of the Lighthouse

An illuminating history of both real-life lighthouses and the beacons of literature and art alike, shedding light on the multifaceted power of these liminal structures.

Suspended between sea and sky, battered by the waves and the wind, lighthouses mark the battle lines between the elements. They guard the boundaries between the solid human world and the primordial chaos of the waters; between stability and instability; between the known and the unknown. As such, they have a strange, universal appeal that few other manmade structures possess.

Engineered to draw the gaze of sailors, lighthouses have likewise long attracted the attention of soldiers and saints, artists and poets, novelists and filmmakers, colonizers and migrants, and, today more than ever, heritage tourists and developers. Their evocative locations, isolation, and resilience, have turned these structures into complex metaphors, magnets for stories. This book explores the rich story of the lighthouse in the human imagination.

"It’s a safe rule of thumb in cinema,’ the film critic Guy Lodge once wrote, ‘that nothing good happens in a lighthouse.’ In her intriguing account of our fascination with lighthouses through the centuries, Veronica della Dora provides plenty of evidence that he was right. Lighthouses may have often been symbols of hope and, literally, beacons of enlightenment. They have also had, as she points out, ‘a dark edge’. . . . Full of eye-opening information. . . . Today, nearly all lighthouses around the world are unmanned. They have lost some of their mystery but our fascination with them remains. They are, in della Dora’s words, ‘magnets for human thoughts and for the human imagination’. Her book goes some way towards explaining that fascination."

“Hauntingly beautiful, dazzlingly written, and brimming with amazing information, Where Light in Darkness Lies is brilliant on lighthouses as symbols of the human struggle for survival and meaning in the face of an ever-encroaching darkness. With her extraordinary eye for detail and evocatively poetic language, della Dora guides us effortlessly through history, geography, literature, religion, art, film, and, not least, actual lighthouses, changing the way we see and understand the world.”

"A beautifully written and comprehensive tribute to lighthouses and their keepers! I enjoyed every word and recommend Where Light in Darkness Lies to lighthouse enthusiasts, history buffs, and anyone looking for a thorough chronicle of an important chapter in maritime history."

"Della Dora introduces us to the enduring symbolic life of the lighthouse, showing how this sentinel structure, designed to guard lives and ensure safe passage at sea, is invested with rich cultural meaning. Within the book’s penetrating beam are coastlines where land meets sea, imperial ambitions, and imaginary worlds, poetic and painterly arts, and deep feelings of spiritual faith."

On the northeast edge of my home island, Venice’s Lido, a thin breakwater juts into the sea. At its extremity is a magical place, suspended between the water and the sky. A little bright red lighthouse stands in the midst of a round artificial islet attached to this ephemeral line of rocks and concrete. Technically, it should be called a light, but we locals affectionately refer to it as ‘the lighthouse’.

To those who come from the sea, the landmark signals the northern port entrance to the lagoon. To those who approach from the land, it promises the end of a long walk or bike ride. Upon entering this strange islet, one is suddenly wrapped in an unreal scenery, as if catapulted inside a surrealist painting. From a distant vanishing point, the lighthouse becomes an uncanny solid presence. The rocks of the breakwater transmute into strange polygons and large blocks of concrete. The warm light of the dusk sharpens their geometrical contours. The elongated dark shadow of the lighthouse touches each block in a slow circular movement, like a giant clock hand. On long summer evenings, the whole place is bathed in a peaceful golden glow. All around is the sound of silence, and the deep breath of the sea.

The San Nicolò lighthouse is modest in size, but the contrast between its saturated bright red and the azure of sky and sea, or even the grey of the crude concrete, naturally leads the eye to it and hardly allows it to wander off. Built to direct ships and boats, this little landmark has nonetheless attracted to its premises generations of regular visitors from the Lido and from the mainland, like a powerful magnet or some mysterious shrine. As with pilgrims of old, some of them have left their trace on the concrete blocks encircling the lighthouse. Their graffiti chronicle bygone loves, celebrate summer excursions or simply ponder on the meaning of life.

Profound or sincere as they might be, human thoughts and words are nonetheless fleeting. Washed away by the waves and by the rain, the graffiti are constantly overwritten and replaced by new ones, as in a living palimpsest. There are two of them, however, that have endured through many years of weather. I remember seeing them as a child on long Sunday walks with my family and as a teenager, when after school I used to cycle to the lighthouse with my books on some bright spring afternoon. I remember their perfect cursive, each letter formed with care. Those ink-black letters still welcome the occasional visitor at the gates of this strange world:

The lighthouse is life. Paradise can wait.—Tony 24.7. ’85
Welcome to the lighthouse. Respect this oasis of peace.—Tony 11.7. ’82
Over the past few years, I have returned to San Nicolò many times. At some point, the little red lighthouse turned into the destination of daily walks during a period of post-operative convalescence. Going to the lighthouse became a sort of afternoon ritual. It was as though journeying towards the red landmark in the crisp wintery light had a soothing effect, or some sort of mysterious therapeutic quality: perhaps it was the rhythmic act of walking on that thin line of concrete lingering on the water or perhaps it was the regular sound of my steps and of my breath fading into the wind; the salty fragrance of the Adriatic; the pungent air biting my face and my fingertips. Or maybe, it was simply the idea of heading towards the edge of the land to embrace the open sea. Those walks inspired this book.

I started to read about lighthouses as an antidote to an impending loss – and ultimately to bereavement. As the guiding light of the person who had been illumining my life for the past twenty years was about to fade, reading about lighthouses came perhaps as an instinctive remedy. One might read an allegory into this – a desperate unconscious attempt to keep the light burning. The truth is that while walking to San Nicolò led me into quiet introspection, reading about lighthouses had the opposite effect. It helped my mind move outwards. It brightened up gloomy afternoons; it opened up wide horizons. It transported me from the countryside of Surrey, England (where I work and live), to distant shores. It made me feel the breath of the sea again. And it reminded me of home. For some reason, reading about lighthouses made me feel happy.

The Mexican essayist Jazmina Barrera says that lighthouses are the opposite of pits. The former are ‘solid towers of light’; the latter are ‘inverted towers of liquid darkness’. Some people, she writes, like looking inside pits searching for the reflection of the Moon. To her though, she confesses, it causes vertigo. But with lighthouses it’s different.

I cease to think about myself. I walk away in space, and travel to remote places. I also walk away in time towards a past which I know I idealize; a past in which solitude was easier. Finally, I separate myself from the tastes of my times, because today lighthouses appear as romantic and sublime figures, two words that have gone out of fashion.
Being from a coastal town or from an island, one is bound to feel some sort of natural affection for lighthouses. Lighthouses can be the landmarks of one’s childhood; they can be quiet retreats and companions of meditation; they can be informal monuments around which communal identities are formed. And yet, every time I shared the idea of this book with a relative, with a friend, with a colleague, or with a student of mine, it turned out that each one of them had a favourite lighthouse, a lighthouse story or something to say about lighthouses – regardless of whether they came from a city or from an island, from the coast or from the countryside. Sometimes this was a lighthouse they had visited, on a brief excursion or during a summer holiday. More often, however, it was a ‘lighthouse of the mind’: a lighthouse they had read or heard about; the picture of a lighthouse they had come across in a magazine or in a children’s book; a lighthouse they had seen in a film, on the Internet or in a videogame; a lighthouse that might never have existed, but in their imagination. Underpinning their stories was a common and mysterious fascination with the subject. I then discovered that there is a whole discipline called pharology (the scientific study of lights and lighthouses); that around the world there are numerous associations promoting lighthouse heritage; and that there are even ‘lighthouse collectors’ – not collectors of lighthouse-themed souvenirs (though there are those as well), but of actual lighthouses. ‘The walkers who bag Scotland’s 284 Munros have it easy compared with those who undertake the ultimate challenge: to visit all 209 working lighthouses that mark the most treacherous corners of Scotland’s coast.’ And the trend seems to be growing.

Where does all this fascination with lighthouses come from? Why are lighthouses, like San Nicolò, with its silences and its strange graffiti, magnets for human thoughts and for the human imagination? This book is a humble attempt at ‘shedding light’ on these two simple and yet complex questions.

Loneliness and Networks: Lighthouses are endlessly suggestive signifiers of both human isolation and our ultimate connectedness to each other.

Lighthouses are special places. Quietly suspended between the flat sea surface and the sky, solidly implanted on the edges of the land, insistently battered by the waves and the wind, lighthouses physically mark the encounter between the elements. They guard the boundaries between the world of humans and the primordial chaos of the water; between perceived stability and instability; between the known and the unknown. As such, they seem to hold a strange universal appeal that few other man-made structures are able to boast.

Lighthouses are paradoxical objects. They are technological engineering conceived in symbiosis with, and yet at the same time standing out from, the landscapes of which they are part. Functional structures largely standardized around the world, they are nonetheless treasured as distinctive local and national landmarks. While, on a chart, they generally feature as equal points in an abstract, geometrical space, taken individually from sea (or ground) level, lighthouses have the ability to generate a distinct sense of place, in a similar way to a church or a beloved monument. Indeed, some of them have long been famous urban icons – think of the Lanterna of Genoa, for centuries watching over the city and its port from the height of its austere slim pillar, or of the stone lighthouse of Alexandroupoli, in northern Greece, standing on the  waterfront among crowded apartment blocks, buzzing cafés and restaurant tables, like a cheerful old friend.