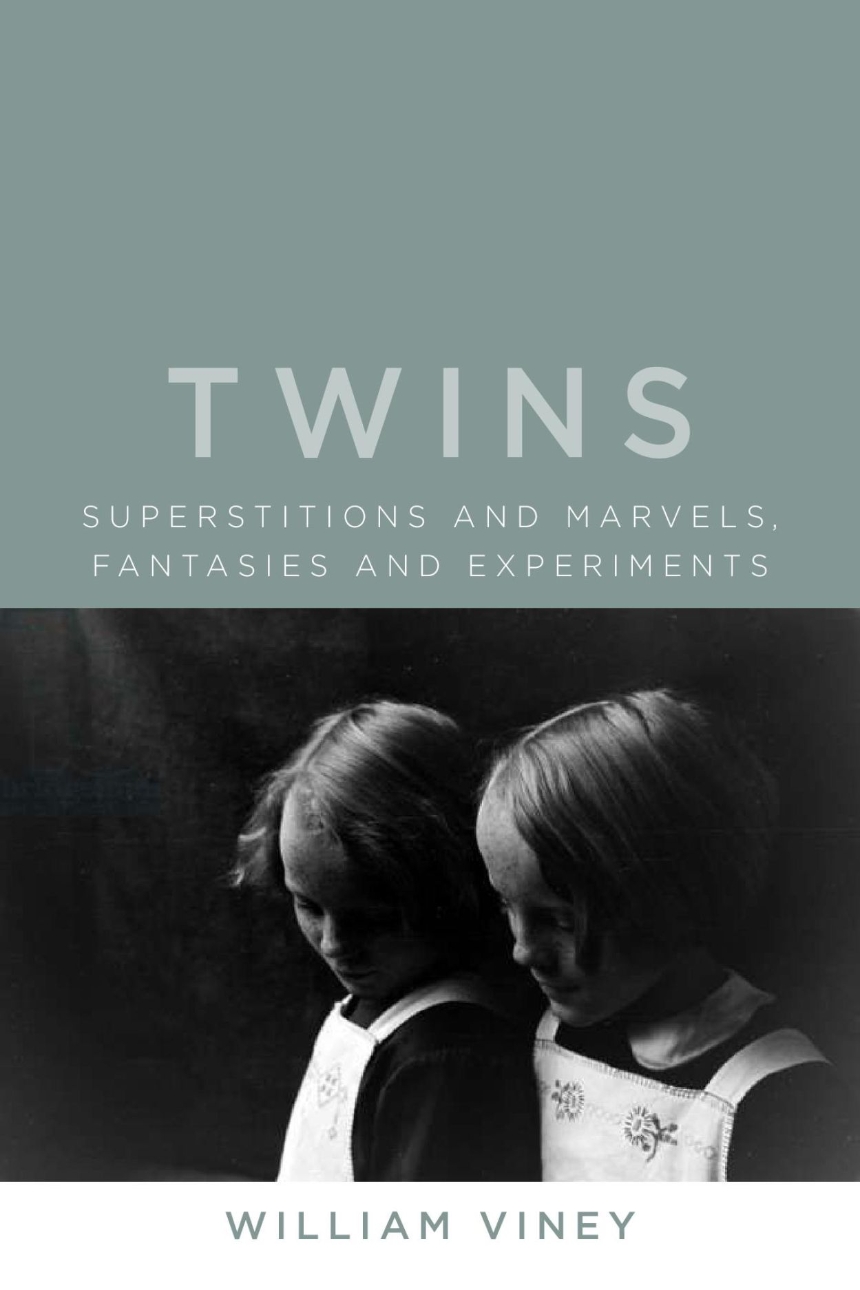 Superstitions and Marvels, Fantasies and Experiments

Superstitions and Marvels, Fantasies and Experiments

Human twins have many meanings and different histories. They have been seen as gods and monsters, signs of danger, death, and sexual deviance. They are taken as objects of wonder and violent repression, the subjects of scientific experiment. Now millions are born through fertility technologies. Their history is often buried in philosophies and medical theories, religious and scientific practices, and countless stories of devotion and tragedy. In this history of superstitions and marvels, fantasies and experiments, William Viney—himself a twin—shows how the use and abuse of twins has helped to shape the world in which we live. This book has been written not just for twins, but for anyone interested in their historical, global, and political impact.

"When Viney writes about twins, he knows whereof he speaks. The author is himself a twin and his meticulously researched narrative of superstitions, fantasies, and experiments reveals the way in which twins have long fascinated us and played a part in shaping our world."

"The 'metamorphic potential' of twins tells us as much about the values of a culture as it does about the mechanics of biology. Viney explores these complexities with style, achieving that rare balance of scholarly rigor and immense readability."

“An intelligent and brilliant history, from ancient times to the present—a cultural history of twins which is also a collective history of their representations.”

“This is a book of probing intelligence, curiosity, and wit, of quickened fascination, and sometimes fear. Viney takes us on an ever-expanding and ever-more intimate journey through our ways of thinking about and with twins, the poetry, science, and theater of twin-ship. He explores what these help us to know of the human, and what they can make us blind to. Twins shifts the ways you see familiar things, and the ways we name the stranger ones.”

Kenneth Gross, author of “Puppet: An Essay on Uncanny Life”

“Viney unfolds what he calls the secret history of wonder attaching to twins, in a book that, in its intelligence and sinuous, intent inquisitiveness, is itself a thing of wonder. Ranging from ancient mythology to contemporary biotechnology, Viney explores the dualities that themselves define twins, as figures both of miracle and of menace. Mirroring with its polymorphous subject, Twins is a positive feat of superfetation.”

Twin history is larger than life, larger than one life, and more than the sum of individual parts: wondrous, monstrous and unreal. Many stories about twins, whether fictional or historical or some combination of the two, turn on powerful beginnings and extraordinary events – their presence is transformative for the places and the people they describe. They embolden particular versions of the past and allow new kinds of future to be forecast. Strange, mysterious or surprising things can make twins different from those who are not born in a pair. The dramatic beginnings and ends formed by these stories make twins toe lines that separate fact and fiction, legend and historical truth. Ancient Greek traditions are full of disagreement about what twins are, what they do and why they do what they do. This variation has to be managed, and, often, a particular version of a story concerning twins becomes more popular than others. While twins are imagined to be unusual or even strange in these stories, the ways they are described can become routine, even ordered. Despite being treated as extraordinary, making make-believe with twins is neither unusual nor strange.

In Homer’s Odyssey, Castor and Pollux are said to be ‘two sons, intrepid twins’, but not gods. For the Theban poet Pindar (c. 518– c. 438 BCE) they are both twins and gods of a particular kind: quasitwins, demigods. It was Pindar’s version that became popular in medieval and Renaissance Europe, when the twins were depicted in paintings by some of European art’s great masters and absorbed into Italy’s most famous art collections. According to one traditional telling, the twins were born to Leda but have different fathers: Pollux is the immortal son of Zeus, while Castor is the mortal son of a Spartan king, Tyndareus. Pollux was conceived when Zeus took the form of a swan and had consensual sex with or raped Leda – accounts vary on this and many other details, and later Catholic depictions took pains to focus on Leda’s motives, her bestial lust. Shortly after this union between deity and animal and human, Leda conceived with her husband, Tyndareus. The ‘heavenly twins’, as they became known, are what modern biologists now call ‘superfecundated’ – that is, resulting when two or more ova from the same menstrual cycle are fertilized by sperm from separate acts of sexual intercourse. Already sexually metamorphic, with a god taking the lustful form of a swan, the twins’ form of conception is analogous to the superfecundation that is now a common phenomenon via assisted reproductive technologies. Of course, Pindar’s tale of the queen, the god-as-swan, the king and the twins brings a different intensity. This is a bombastic story: a transgressive jumble of sex, fantasy, and violence to bring worlds of gods, humans and animals together. Twins, rather than single-born people, rise out of this jumble. They are emblems of a new settlement between the heavens and the earth. The heroes are inseparable adventurers and heroes. Then Castor is mortally wounded. Their tale ends with Pollux choosing whether or not he can bear to live without his twin. Zeus explains the conditions of their afterlife together:
‘. . . if you fight for your brother,
And are minded to share with him in all things alike,
You may live half beneath the earth,
And half in the sky’s golden palaces.’
He spoke, and Polydeukes set
No double counsel in his heart,
But freed the eye and then the voice
Of bronze belted Kastor.
Pollux decides to share his immortality and joins Castor in death, whereafter they alternate their days in Hades and on Mount Olympus. Pollux’s decision not to be separated from his brother collapses all the differences that their birth may have created; their life of unity is perfected in death. In Pindar’s account, ‘Polydeukes’ (Greek for ‘many doubles’) is in no doubt. The twins enjoy cosmological status in the ‘sky’s golden palaces’ as Gemini, the heavenly twins.

The simultaneous birth of twins can put two beings into lifelong comparison, caught in the extremes of difference and sameness. But twins can also figure as composites and models for thinking about, comparing and melding people into transgressive images. Twins may make it easier for others to see similarities and differences between people, as peculiar binoculars for complex problems, and they often get recruited, over and again, to serve the interests of others. Castor and Pollux are not unique for being twins who are celebrated for what they reveal about relationships, social interactions, the world and the cosmos, but they do not act alone as twins; they are part of a large company.

The power of gods to intervene passionately and generatively in the world of humans is often expressed in twin-making fecundity. Zeus fathers at least three sets of twins and Poseidon four, while the twin god Apollo, when tending the cattle of Admetos, is given the unusual power to create twins among other species: ‘causing all cows to deliver twins at every birth’. Distinctions between deities and humans are not simply reproduced through twinning but are often reworked or revised.

The large number of twins in Greek legend means that it is difficult to give them a single meaning. The Swiss archaeologist Véronique Dasen has observed that all the different things that twins do mean that generalizations about them are difficult to uphold. There is a ‘complex range of twin relations’, she writes, ‘from intimate union and concord to rivalry and deadly hate’. A further distinction can be added to this particularly active spectrum of mythic twin relations: what should we say about the many twins in Greek myths who seem to have little or no impact on the greater tale of Greek origins? They are not given a transformative position within the social, geographic or political development of the ancient world; they do not go to war with one another; nor are they bonded by unusually strong feelings of sibling devotion. Some mythic twins seem to ‘do’ little. Being a twin is not a free pass into a pantheon of greats. Though Eurysthenes and Procles are said to jointly rule Lacedaemon, and marry the twin sisters Anaxandra and Lathria, it is their sons who found the royal Agiad and Eurypontid dynasties of Sparta. In these inconsistencies, which are underpinned by the variety of storytelling and written traditions, a middle ground opens between the stereotypes of active collaboration and violent murder. Twins of ancient Greek cultures and the cultures that have adopted Greek models, such as those of ancient and modern Rome, continue to have many roles and meanings.

These motionless twin figures have a cultural, historical and material life that is nevertheless far from static. There are inconsistencies in the way that twins are imagined between pairs, just as there are uncertainties in the way twins are valued within pairs. Castor and Pollux, heavenly twins, Gemini, Dioscuri (dios meaning ‘god’ and couros meaning ‘male youth’; the twins are literally ‘sons of god’) – they have many names and multiple histories, magical and violent. Half-blinded by midwinter light, I squint through my fingers at these carved blocks of stone. It is strange how statues and the stories attached to them get mixed up, especially when, as in this case, what is being celebrated as uniquely Roman turns out to be a serial copy. The Romans believed that the legend of the twins had a Greek origin. They speculated on these origins in a way that left those of the medieval era attributing the marble sculptures to Greek artists (hence their fanciful inscriptions opus Praxitelis, the work of Praxiteles, and opus Fidae, the work of Phidias). But the attribution is a later Roman invention. The statues have been traced to the fifth century CE, dating from the restoration of the Baths of Constantine in circa 443 CE, and were later moved and restored by Pope Sixtus V in 1585, and again by Pius VI in 1786. Their current position in front of the Quirinale is ancient, medieval, early modern, and formed in more recent centuries. In turn, they have been copied.

Heroically divine, horse-riding twins – of which Castor and Pollux are an example – can be found in many Indo-European languages and cultures. Throughout Indic, Greek, Baltic and Celtic mythologies, twins are routinely viewed as celestial and godlike, and they represent forms of fraternal as well as martial union. From the Isle of Man to Sri Lanka, from Anglo-Saxon settlers and warrior heroes Hengist and Horsa to the Welsh brothers Brân and Manawydan, to the Hindu Aśvins, divine twin horsemen of the Rig Veda – ‘heavenly twins’ have travelled in word, image, ritual and rite. Castor and Pollux are myths of mobility; twins on the go. Both now and in the past, Rome’s Castor and Pollux are given a global as well as astrological pedestal. Iconoclasts of the present and past have understood that public monuments like these, especially when mediated by the modern photographic lens, appear as fixed things rather than changeable figures of history. And statues, mute and muting, stand as symbols in whose name bold authority can be stamped. Not all twins are born equal; not all twins become icons. Castor and Pollux occupy the third sign in the astrological zodiac, Gemini, after the constellation that bears their name. Their elevated position in this city is achieved in matter and mind, written into stories and carved in stone in ways that have tied twins to weird biologies and spectacular acts of violent heroism.