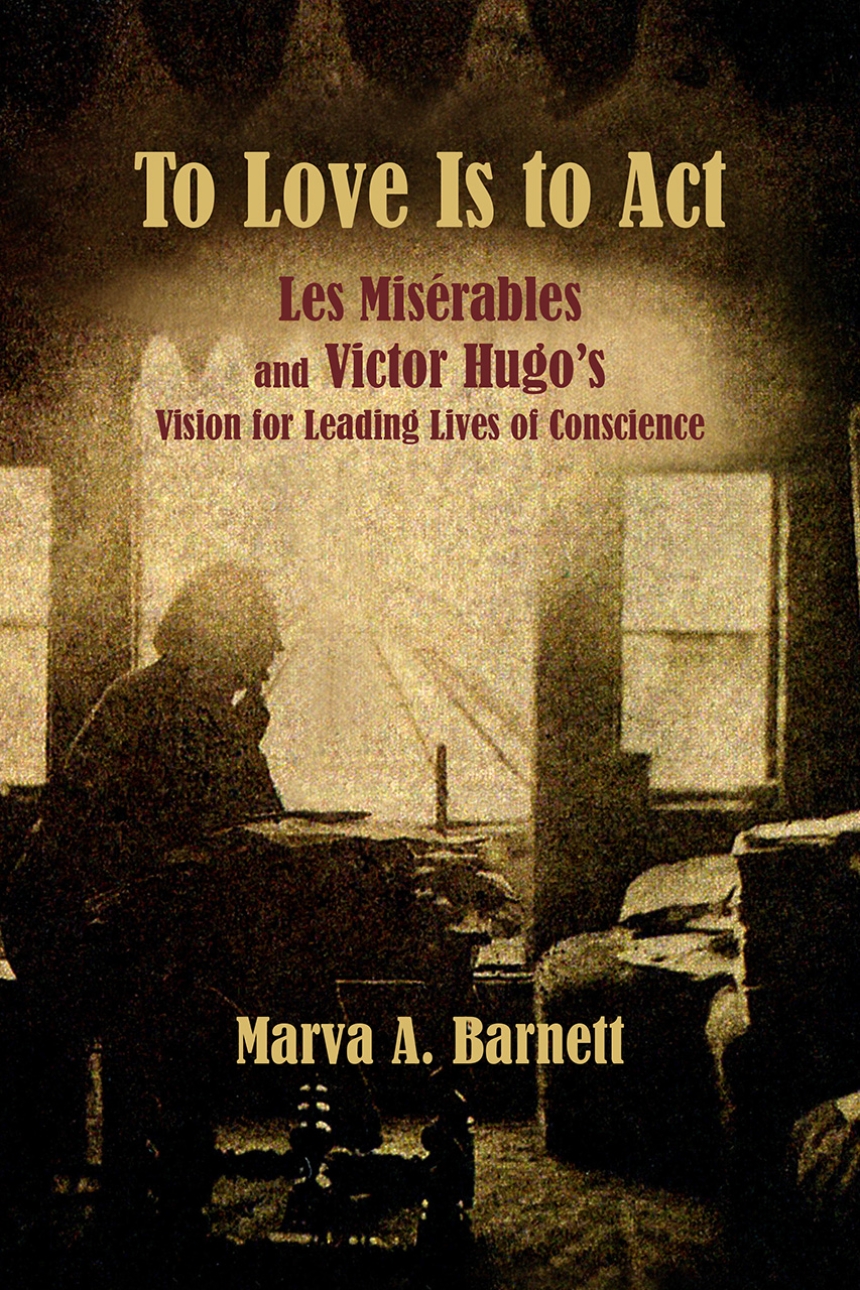 With a Foreword by Alain  Boublil and Claude-Michel Schönberg
“To love is to act”— “Aimer, c’est agir.”  These words, which Victor Hugo wrote three days before he died, epitomize his life’s philosophy. His love of freedom, democracy, and all people—especially the poor and wretched—drove him not only to write his epic Les Misérables but also to follow his conscience. We have much to learn from Hugo, who battled for justice, lobbied against slavery and the death penalty, and fought for the rights of women and children. In a series of essays that interweave Hugo’s life with Les Misérables and point to the novel’s contemporary relevance, To Love Is to Act explores how Hugo reveals his guiding principles for life, including his belief in the redemptive power of love and forgiveness. Enriching the book are insights from artists who captured the novel’s heart in the famed musical, Les Mis creators Alain Boublil and Claude-Michel Schönberg,  producer of the musical Les Misérables Cameron Mackintosh, film director Tom Hooper, and award-winning actors who have portrayed Jean Valjean: Colm Wilkinson and Hugh Jackman.

“In Les Misérables, Victor Hugo inspires us with both his humanity and his fight to eliminate poverty, which is to me still our greatest issue today. In To Love Is to Act, Marva Barnett insightfully explores Hugo’s call upon us to live through love and conscience, to ask ourselves just what we are prepared to stand up for and what we are prepared to do. Particularly after playing Jean Valjean, I admire Valjean’s tenacity to fight through his regrets and pain and to commit himself to an ideal, to work selflessly for something higher than himself. Readers of To Love Is to Act will find themselves intrigued by Hugo’s guiding life principles and, like fans of Les Mis, aspiring to be better people every day.”

"'To love is to act', Hugo’s words three days before dying, center Barnett’s explorations of freedom, democracy, justice, poverty—the moral principles that underlie the 2000 pages of Hugo’s Les Misérables—and her reflection on the major themes of conscience and love. Rather than dwell on literary analysis unfamiliar to the American connoisseur of the musical, the book’s short chapters invite the reader to explore details of Hugo’s masterpiece, the conditions of its creation, its references and its mysteries. . . .  We may indeed rightly ask why such a tragic story as Les Misérables still inspires so many. Between idealism and optimism, between conscience and love, Hugo believed in the capacity for progress—progressus—forward movement as much opposed to imaginary utopias as to harsh realities. For Hugo, the purpose of writing is not so much to represent progress as to effect it. If Les Misérables moves, mobilizes, sets in motion—it is because it is the movement itself, a work in progress beyond the death of its author, for a time still to come. For that very reason, Marva Barnett’s book might mobilize new readers as well as scholars and specialists of Hugo’s work, who will appreciate her thoughtful approach to reading Les Misérables.”

"To Love Is to Act is in itself an act of love, an enthusiastic exploration of an author’s as seen through what is probably his most significant and certainly his most successful work. It should be read and enjoyed on its own terms."

"Barnett explores the power of 'Les Misérables,' and how Victor Hugo’s life experiences provoke and inform a novel that challenges us to live our best possible lives. Her book includes interviews with creators of the popular stage and screen musical."

"To Love Is to Act is a beautiful and timely collection of essays on how the themes of Hugo’s celebrated work Les Miserables represent the author’s deepest values, and how modern interpretations of them on stage and screen have proven how timeless they are. Her essays on seeing others, forgiveness, the ability of people to change, finding the strength to carry on amidst dark times, and the inseparability of love and action . . . .  If you love Les Miserables—novel, musical or movie—you’ll love this book."

“Marva Barnett, a top expert on Les Misérables, has had a brilliant insight: this novel cannot be reduced to its origins, its making, its publication, or its reception—all of which have been recounted a hundred times. Her goal, instead, is to dive right to the heart of the book: to show what it actually says on life’s essential topics, to explain its undiminished power to fascinate, its eternal newness. To accomplish this, she has concentrated in unparalleled fashion on its most successful adaptation, the record-setting musical—and she offers a contrarian itinerary, a stimulating and lively one that mixes quotes with musings, images with accounts, dialogues with secrets, from Mis to Misérables, from actors to roles, from the movie to the novel.”

"Victor Hugo’s monumental story remains an uplifting triumph because at its beating heart there is always a ray of light that inspires the survival of the human spirit in a dark, unjust and dangerous world. The story’s social resonance remains as potent now as when it was first published over 150 years ago. The characters of Les Misérables are so brilliantly observed that new generations recognise and embrace them as their own all over the world. That this great novel has also inspired one of the most successful, powerful and emotional musicals of all time is a dream I have no doubt Hugo would have liked to dream himself as it has brought his masterwork to a far wider audience than he could ever have dreamed of."