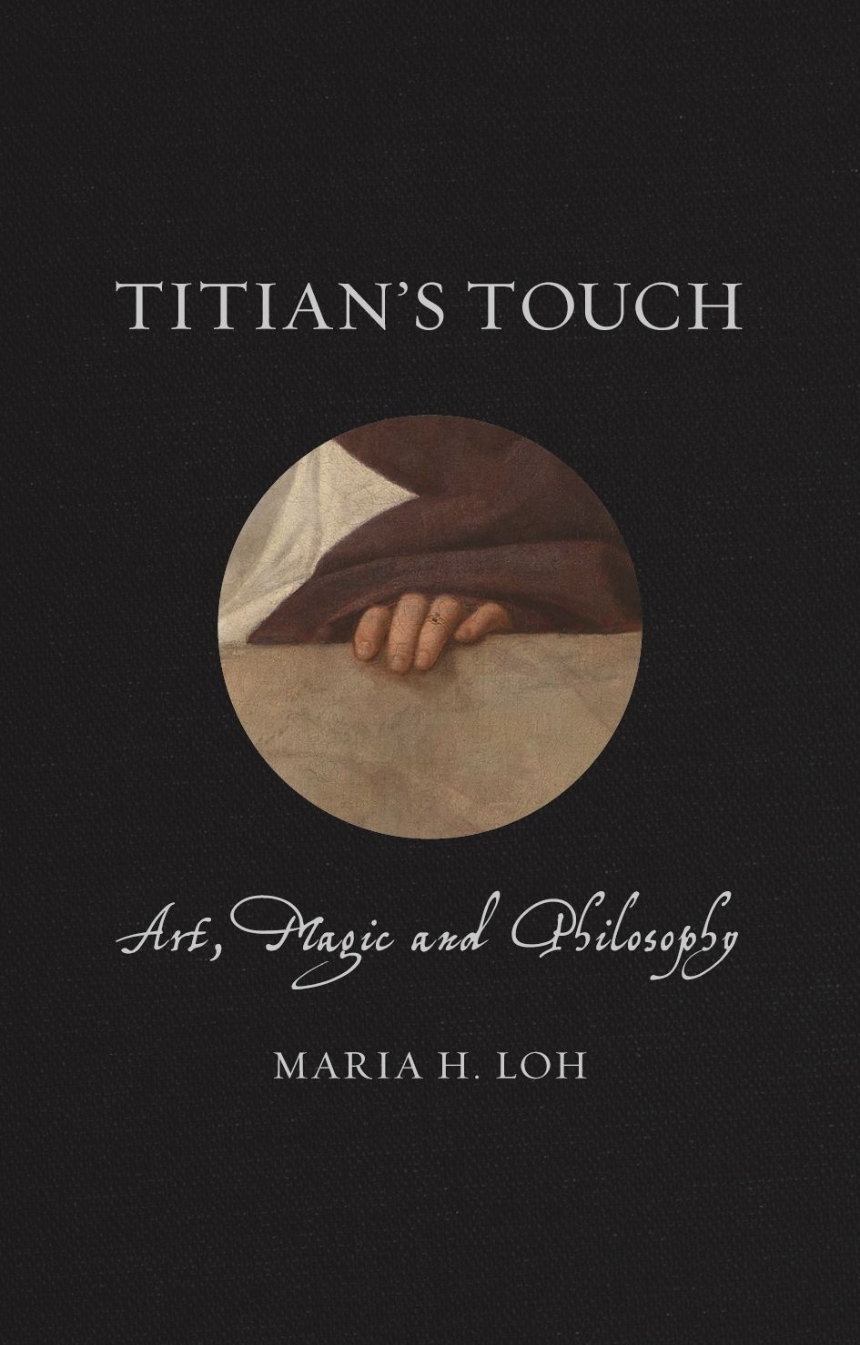 At the end of his long, prolific life, Titian was rumored to paint directly on the canvas with his bare hands. He would slide his fingers across bright ridges of oil paint, loosening the colors, blending, blurring, and then bringing them together again. With nothing more than the stroke of a thumb or the flick of a nail, Titian’s touch brought the world to life. The clinking of glasses, the clanging of swords, and the cry of a woman’s grief. The sensation of hair brushing up against naked flesh, the sudden blush of unplanned desire, and the dry taste of fear in a lost, shadowy place.

Titian’s art, Maria H. Loh argues in this exquisitely illustrated book, was and is a synesthetic experience. To see is at once to hear, to smell, to taste, and to touch. But while Titian was fully attached to the world around him, he also held the universe in his hands. Like a magician, he could conjure appearances out of thin air. Like a philosopher, his exploration into the very nature of things channelled and challenged the controversial ideas of his day. But as a painter, he created the world anew. Dogs, babies, rubies, and pearls. Falcons, flowers, gloves, and stone. Shepherds, mothers, gods, and men. Paint, canvas, blood, sweat, and tears. In a series of close visual investigations, Loh guides us through the lush, vibrant world of Titian’s touch.

"Loh explores Titian’s lifelong art of painting 'materiality, the body, and the senses,' adding a postmodern philosophical viewpoint. . . . With her lively intelligence, curiosity, and emotive writing style, the author shows the nonspecialist how to view a Titian painting and suggests many possible ways to think about each work. Proceeding chronologically and thematically, Loh considers Titian's work within his personal and historical circumstances, drawing on previous scholarship and a variety of methodologies and introducing new theories and speculation of her own. Particularly impressive is her use of a wide range of primary material (contemporaneous records, letters, diaries, treatises, art theory) to create a vivid sense of Titian, his patrons, friends, family, studio, and career in sixteenth-century Venice. Also noteworthy is the author’s ability to pivot from traditional art historical methods to postmodern theory and the idea that a painting and the viewer together construct its meaning. Readers at all levels will be drawn into this beautifully produced, engaging text; specialists will be interested in the excellent notes and bibliography. . . . Highly recommended."

"This short book reminds us of Titian’s achievement, something we may be too much inclined to take for granted. . . . What Loh does is to explain how Titian, a master of capturing the physical world, did so the more skillfully because of his exploration of the mysteries lying beneath."

"In this engaging and compact biography, part of the Renaissance Lives series, Loh presents Titian as a philosopher whose powerful tool of investigation was his paintbrush. She ties his evolving technical style to a philosophical quest for the essence and meaning of nature, supernatural phenomena, human nature and the body, and various forms of stuff and matter. She posits that Titian, much like his older contemporary Leonardo da Vinci, based his artistic practice in the close and exhaustive sensation of personal experience and the physical world around him. Indeed, one of the strongest contributions of the book is Loh’s initiative to contextualize what Titian saw, heard, tasted, and touched, and to explain how historical objects, materials, systems, and practices—from marking musical time, to wearing kidskin gloves and gemstones, to practicing falconry—were conceptualized during his life."

"This critical study of the Venetian Renaissance master . . . exemplifies contemporary art historical methodologies by offering a close study of Titian’s work and a detailed introduction to his intellectual and cultural world."

“This short book makes a very delightful addition to the literature on Titian. . . . Loh keeps her prose light, though this does not compromise the depth or weight of her analysis. She brings a dazzling array of sources to bear on Titian’s paintings. . . . Loh’s nonchalant ingenuity and fluid wit, along with her ability to inventively defamiliarize even the most-discussed among the great master’s works, has opened up the way for a new kind of Titian whose more immediate realities—his long love affair with Cecilia or his obsession with babies, dogs, fur, jewelry, and clothing—are, after all, much more appealing than the aspects I had highlighted: his ferocious individualism, professional jealousy, and old-age avarice.”

“More than anyone it was Titian who launched what would remain for half a millennium the quintessential art object: the framed, autonomous painting executed in oil on canvas. At long last, Loh has given us a book that does justice to this immense historical achievement. Titian’s Touch is a peerless introduction to the artist and a mesmerizing primer in how to look at paintings.”

“Loh’s Titian is a ‘master dialectician, coupling contradictory details together in an almost subliminal mirroring of forms.’ These words, which she penned with regards to the Prado’s Venus and Adonis, could easily be interspersed in any of the piercing investigations that this study offers of one masterpiece after the other by the Venetian master. She too is a master dialectician, particularly apt at the art of synthesis—combining heterogeneous approaches such as contextual, formal, iconographical, material, and historiographical analyses into a shimmering whole. Her erudition about Titian’s cultural world is staggering yet never smothering, as it is always offered in passing to shed light onto this or that understudied aspect of a specific work, not to provide a definitive key to all its mysteries. From La Schiavona, a portrait Titian painted in his youth, to the unfinished Pietà of his last years, in which she uncovers its echo, Loh constructs Titian’s oeuvre as a rigorous, totalizing enterprise—or, to use her expression, as a ‘visual dissertation’—yet she makes sure to leave it open to divergent interpretations. Her intelligence gleams on every page.”

“With Titian’s Touch, Loh has achieved something quite rare, a genuinely fresh and engaging study of an artist whose paintings may be very familiar but are very difficult to turn into a satisfying account. In some ways this book is like a journey that starts from a known place and takes you somewhere you could not have imagined, and does so by interconnecting an impressive depth of knowledge with a highly imaginative approach to images. It is witty and elegant, and always self-aware. And, most importantly, it reconnects the work of Titian with a broader and more contemporary readership.”