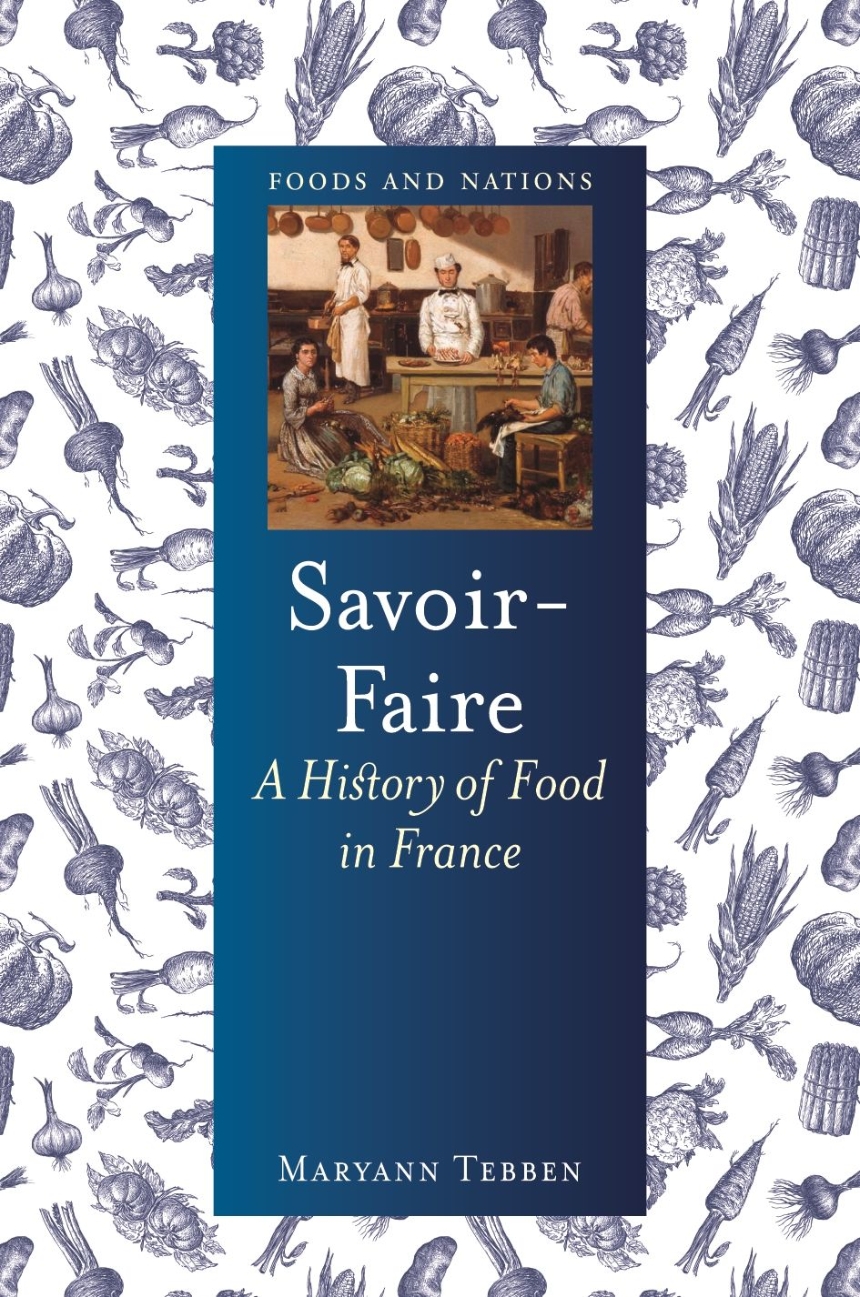 A History of Food in France

A History of Food in France

Savoir-Faire is a comprehensive account of France’s rich culinary history, which is not only full of tales of haute cuisine, but seasoned with myths and stories from a wide variety of times and places—from snail hunting in Burgundy to female chefs in Lyon, and from cheese appreciation in Roman Gaul to bread debates from the Middle Ages to the present. It examines the use of less familiar ingredients such as chestnuts, couscous, and oysters; explores French food in literature and film; reveals the influence of France’s overseas territories on the shape of French cuisine today; and includes historical recipes for readers to try at home.

"The French are acknowledged to have the world’s most elegant, sophisticated cuisine, but how did this reputation and style of cooking evolve? In Savoir-Faire, Tebben teases out centuries of culinary history and its role in creating France’s national identity, relating how French food became such an elite 'monolithic presence.' . . . Tebben’s overarching theme is that French food’s perceived superiority is based on a constructed, culture-wide narrative, reinforced with panache and passion in France’s art and literature and enshrined in protectionist regulation. She argues that everyone from rural farmers and cheesemakers to Parisian haute cuisine restaurateurs believes in and reinforces the myth that French cuisine is the ne plus ultra. Savoir-Faire underscores that, while France may never have been a military colossus, it has conquered the world with its 'aesthetics and artistry, incomprehensible nomenclature, and an indefinable but irresistible stylishness, especially in the culinary arts.'"

"A detailed look at France’s food innovations and developments and how the country’s relationship with eating changed over the centuries. From garlic all the way to modern days, passing by medieval bread, cheese, and France’s nineteenth-century global food domination, this book is a beautifully complete story of one nation’s love affair with food. . . . A particularly exciting section tells the story of cheese. It is impossible today to not associate France with the stuff—be it Camembert, Roquefort, or Mont d’or. As the author points out, 'no practical justification can be made for 1,500 cheeses, and it is hard to fathom any country other than France creating and maintaining a government agency . . . dedicated to recognizing and protecting standards of quality.'"

"Tebben does a deep literary, and culinary, dive into the history of French cuisine and how it shaped the country’s culture and global standard for refined, high-end cuisine in her new book. . . . What Tebben found in her research was how adept the French were—and still are—at cultivating and promoting a specific worldview of their culture, and their food. Stories, such as the treasured tale of Dom Pérignon, are peppered throughout French literature and artwork, repeated so many times they become part of the country’s identity."

"A masterwork of history. . . . Tebben particularizes wine and beer cultures and tracks the advances in bread making from the Middle Ages through the Renaissance, citing shifts in basic ingredients from wheat flour to less familiar carbohydrate sources. Excellent illustrations draw on works of bas-relief, paintings, photographs, and line drawings suited to the text. . . . Recommended."

“Savoir-Faire is a superbly researched and extremely comprehensive history of the complex food of France. Tebben’s exhaustive documentation takes us from the salted pork of the Gauls to the bread of the middle ages, the nineteenth-century opulence of Carème’s buffet to the cuisine bourgeoise and les méres de Lyon. An all-encompassing work for anyone interested in the importance of cuisine in French culture.”

“The book is admirably ambitious, crisply written, and lively. . . . It brims with an abundance of varied information. . . . A very readable, wide-ranging, and original synthesis on the subject.”

"So much has been said—and written—on the subject of French food that the author wisely does not set out to accomplish such an impossible task. Instead, she gives the reader a guided tour to select highlights. The journey begins with the remote and quasi mythical, culinary habits of Gaul at the time of the Franks (and Romans), and ends with the soul-searching of a twenty-first century that questions the definition/nature of an ever-evolving 'French' cuisine. Both producers and consumers—in Metropolitan France as well as in the far-flung colonies—hold center stage in an unfolding story told with verve. And, throughout this narrative, emerges the centuries-long ability of French culture to write about and represent food, turning it into one of the most easily recognized cuisines in the world."