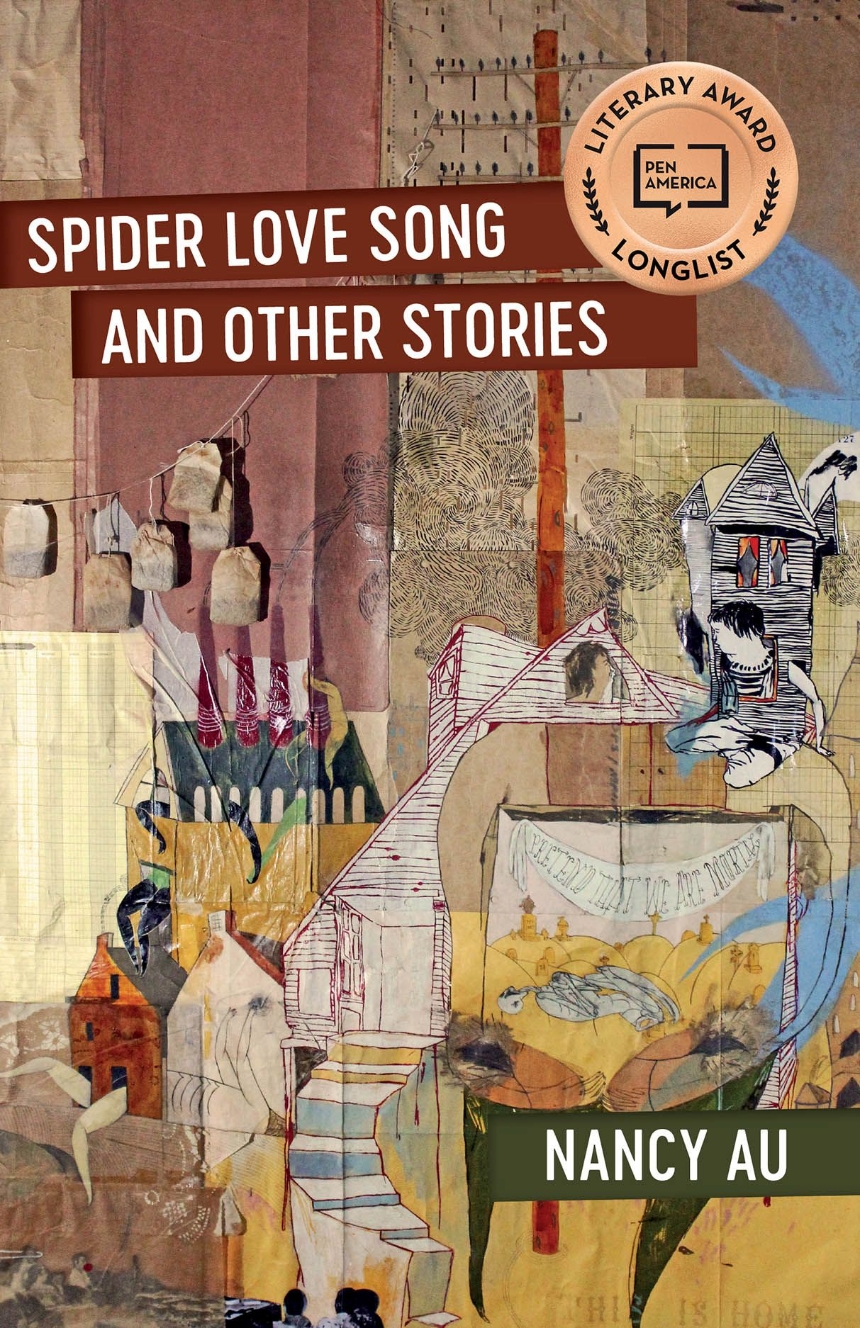 Spider Love Song and Other Stories

Spider Love Song and Other Stories

Nancy Au’s debut collection is rich with scents, sounds, imaginative leaps, and unexpected angles of vision. These seventeen stories present the challenges facing characters whose inner and outer lives often do not align, whose spirits attempt flight despite dashed hopes and lean circumstances. Marginalized by race, age, and sexuality, they endeavor to create new worlds that honor their identities and their Chinese heritage.

Au excels at inhabiting the minds and hearts of children and the elderly. In the title story, Sophie Chu dresses daily in her increasingly shabby elephant costume to ensure her missing parents recognize her upon their return. In “The Unfed,” a village elder seeks to revive, with her dimming magic, a mountain community struck by tragedy. “Louise” follows, with deceptive hilarity (involving a one-eyed duck), the nuanced give and take between May Zhou and Lai, dissimilar yet passionate partners considering parenthood. The volume also offers sparkling speculative work that taps into the strength of nature—fox spirits and fire beetles, swollen rivers and rippling clouds—to showcase the sometimes surreal transformations of Au’s protagonists.

Spider Love Song and Other Stories treads the fault line that forms between lovers, families, friends, cultures—exposing injuries and vulnerabilities, but also the strength and courage necessary to recast resentment and anger into wonder and power. Au’s lyrical style, humor, and tender attention to her characters’ fancies and failings make this powerful debut a delight to read.

"Tender and strange, startling and lyrical, each story in this extraordinary debut collection invokes, like a poem, a deep unsayable that draws heartbreakingly close and can almost be touched. Au’s characters are rare and subversive in their multidimensionality, traversing the Chinese diaspora in subtle, complex, and magical ways, all sharing in the intimate condition of being waylaid by the world. Every sentence and image feels sculpted out of clay—careful, astonishing, and wondrously impressed with the fingerprints of their creator."

"The lush and vibrant world of Nancy Au’s Spider Love Song and Other Stories is teeming with somnambulist fathers, one-eyed duck children, dreams of an all Chinese American Atlantis, storytelling fox spirits, orphans seeking the cure for grief and more. Darkly funny at times and always profound, Au’s imagination lends us magic to feel our way through what it means to be queer, Chinese American, indebted to our mothers and ancestors, and always longing for something more."

"Nancy Au writes about badass women, women born as damselfly nymphs in China who become grounded, wingless, in America, mothers and daughters and grandmothers who are sex, who are power, who are sarcastic beasts, who are us. Spider Love Song and Other Stories is a collection like no other. Read it and marvel."

"Foxes, turtles, ducks, oysters, fish, badgers, beetles, damselflies, bees: all manner of creatures scratch, swim, thrum, and shimmer through these tender and fantastic stories. Characters struggle with the entanglements of the living and the dead, like the ‘spiders' webs [that] can wind around anything that doesn’t pay attention,’ while they long to be out in the world that both compels and terrifies. I was spellbound by Au’s unique vision and language that pay attention to the many wild, rich worlds that hold us.”

Peg Alford Pursell, author of A Girl Goes into the Forest

"These stories sparkle with life and secrets, joy and power, pain and hilarity and sharp insights into the human heart. Nancy Au is a rare and blazing talent, and this debut collection is a house of wonders, thrilling and unforgettable."

“Tremendous in their sensitivity and imagination, these stories layer complex images with a powerful cadence. Their characters struggle to navigate cultural differences and challenging circumstances. . . . Au’s debut short story collection is resonant, nuanced, and profound, and its views of characters facing difficulty with strength and courage are unique and engaging.”

"Conclusions? Revelations? Not of the traditional or genre sort. Instead each tale comprises something like a visit to the home of an acquaintance, only made during those times which are typically private. Pull up a chair and observe."

“Spider Love Song and Other Stories is an eclectic mixture of distinctive characters and offbeat plots. . . . Au blends a lyrical style. . . with more matter-of-fact prose. Her stories have a purely aesthetic draw, but even those that are shorter and more poetic work to incorporate interesting plot arcs. Some stories evince a more natural momentum than others, but they all lead the reader to new territory, often stopping on unexpected notes.”

“If you listen carefully to Spider Love Song, you might find a place between hearing and imagination, invisibility and wonder. . .”