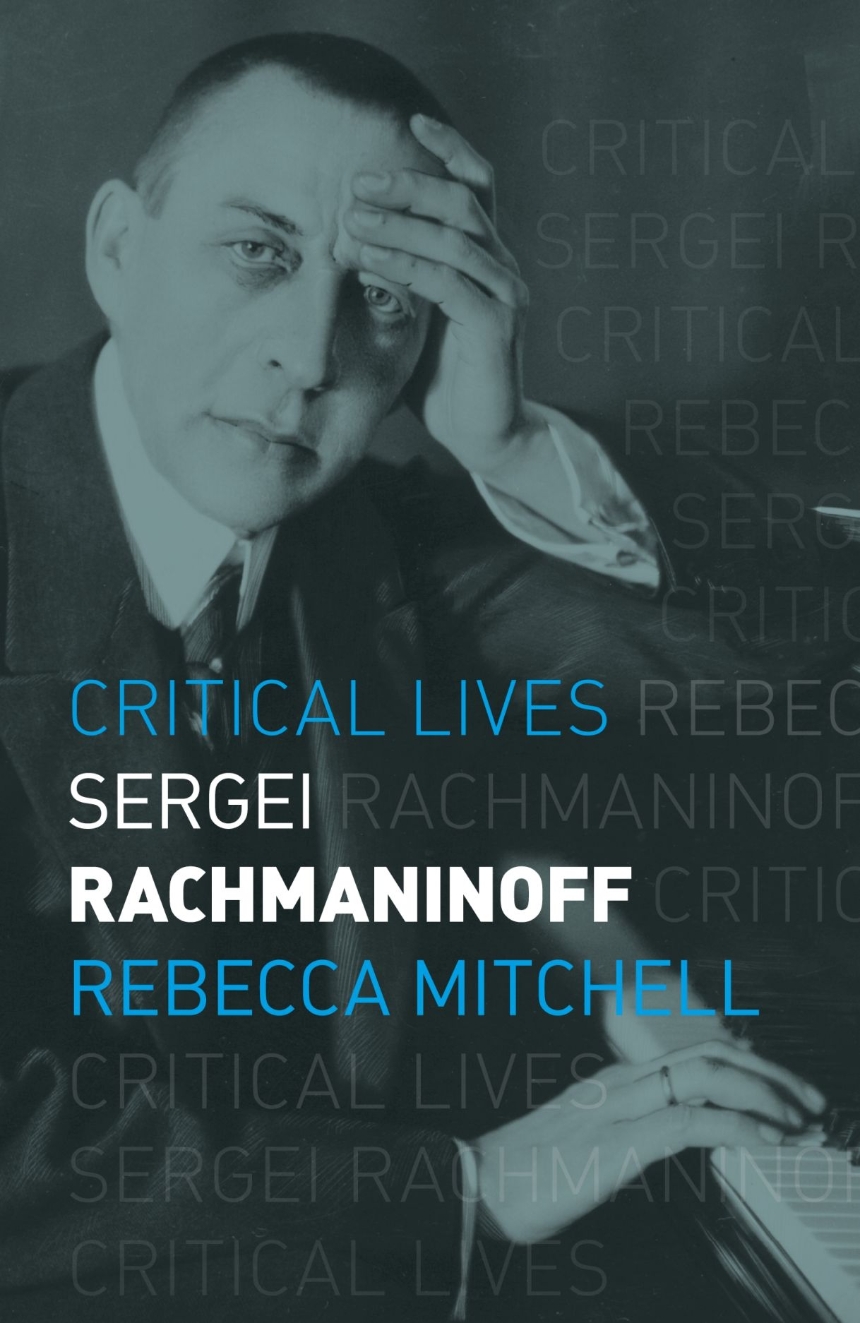 Drawing extensively on Russian-language sources, a concise yet comprehensive survey of the life and work of one of classical music’s great composers.

Unquestionably one of the most popular composers of classical music, Sergei Rachmaninoff has not always been so admired by critics. Detractors have long perceived Rachmaninoff as part of an outdated Romantic tradition from a bygone Russian world, aloof from the modernist experimentation of more innovative contemporaries such as Igor Stravinsky.

In this new assessment, Rebecca Mitchell resituates Rachmaninoff in the context of his time, bringing together the composer and his music within the remarkably dynamic era in which he lived and worked. Both in Russia and later in America, Rachmaninoff and his music were profoundly modern expressions of life in tune with an uncertain world. This concise yet comprehensive biography will interest general readers as well as those more familiar with this giant of Russian classical music.

"A new critical and scholarly study of Rachmaninoff has been long overdue, and Mitchell's compact but well-researched book is an important step forwards. Drawing on a wealth of sources, she follows Rachmaninov's journey from his childhood in a broken family home to his death in his Beverly Hills house a few days before his seventieth birthday. Along the way, she offers much-needed nuances to some of the hoariest myths associated with the composer."

“This is a vivid and original portrait of one of the twentieth century’s most beloved composers. Rachmaninoff’s music ranks among the most popular of any classical composer, yet it has been snubbed by composers and musicologists alike as somehow out of step with its time. This biography should kickstart the long overdue process of a reassessment and rediscovery of Rachmaninoff’s career.”

Pauline Fairclough, professor of music, University of Bristol, and author of “Dmitry Shostakovich”

"'Modern, but not modernist' is how Mitchell defines Sergei Rachmaninoff. Composer, conductor, virtuosic performer and celebrity, he was also a market-savvy manager of his own resources, as keen on cutting-edge recording technology as he was on fast cars. Nostalgic? Only when it suited him. To be modern, Mitchell cogently argues, is to take a stand in a world where tradition is forever dissolving."

Prelude: In Search of Rachmaninoff

Who was Sergei Vasil’evich Rachmaninoff?

For his contemporaries in the West, he was the eternally nostalgic émigré, irreparably cut off from his homeland, an exile from an earlier age.

Shortly after Rachmaninoff’s death in 1943, columnist Leonard Liebling concluded that Rachmaninoff ‘never got over the tragedy of the Russia he had known. Inside him was a deep melancholy that showed in his face, and especially in his eyes.’ He was a man outside of time, a rare link ‘between the soft romantic past and the hard realism of nowadays’.

Rachmaninoff’s personal friend, musicologist Alfred Swan summed up this view in 1944: ‘in spite of a deeply affectionate family, in spite of his great success all over the world, and the devotion of his audiences, Rachmaninoff lived shut up within himself, alone in spirit, and everlastingly homesick for his Russia.’

Fellow composer and compatriot Igor Stravinsky called Rachmaninoff ‘a six-and-a-half-foot-tall scowl’. Indeed, a typical photograph of Rachmaninoff’s stern countenance shortly after his emigration to the United States conveys a serious and unsmiling image. Impeccably dressed, hat in hand, he is a man in motion, yet somehow outside his own time. In many photographs, his mournful face seems virtually identical. Shortly before his death, Rachmaninoff reflected:
I feel like a ghost wandering in a world grown alien. I cannot cast out the old way of writing, and I cannot acquire the new. I have made intense effort to feel the musical manner of today, but it will not come to me. Unlike Madame Butterfly with her quick religious conversion, I cannot cast out my musical gods in a moment and bend the knee to new ones. Even with the disaster of living through what has befallen the Russia where I spent my happiest years, yet I always feel that my own music and my reactions to all music, remained spiritually the same, unendingly obedient to trying to create beauty.
The Bolshevik Revolution of 1917 and Rachmaninoff’s subsequent self-imposed exile aided in creating an eternalized image of ‘before’ and ‘after’ in his biography. His sudden shift from composition to performance after 1917 exiled the majority of his oeuvre into the haze of an eternalized ‘Russianness’ alien to the reality of Soviet tumult, even as he cemented his status as a leading concert pianist via cutting-edge recording technology.

Rachmaninoff’s rich harmonic textures, haunting melodies and passionate emotions seemed to listeners to capture the melancholic, nineteenth-century Russian soul, trapped in a world made foreign by external forces. Indeed, the mystical harmonies of Rachmaninoff’s romance op. 8, no. 5, ‘Dream’, practically foreshadow Rachmaninoff’s tragic fate. A translation of Heinrich Heine’s poem mourning the loss of homeland (‘I Once Had a Lovely Fatherland’), it ‘conjures up thoughts of his native land and of past happiness there’, before the realization that ‘it has all been only in his mind.’ The first evocative exclamation ‘but it was a dream!’ is followed by a pensive piano solo that unexpectedly shifts from the opening key of E-flat major through C minor into the distant key of G-flat major, expressing longing for a lost world while mourning its unattainability. In actual fact, however, the 1893 work maps onto Rachmaninoff’s later biography by sheer chance. The dedicatee, Natalia Skalon, older sister of Rachmaninoff’s first love interest, Vera Skalon, might well have heard a very different kind of nostalgia in the work – that of a young man reflecting on his first adolescent crush. Only a few close friends and family penetrated the mask of external reserve that Rachmaninoff, an intensely private person, always presented to the outside world. To them, a very different personality was revealed: a sensitive soul in need of human interaction who loved to tease and play practical jokes.

The popular image of a man out of touch with contemporary reality has not always played in the composer’s favour. Critics have often attacked his adherence to a ‘traditional’ or ‘conservative’ musical style that has outlived its expressive potential. Such a view was captured by musicologist Eric Blom in 1954: ‘As a composer’, sniffed Blom derisively, ‘[Rachmaninoff] can hardly be said to have belonged to his time at all. His music is well constructed and effective, but monotonous in texture, which consists in essence mainly of artificial and gushing tunes accompanied by a variety of figures derived from arpeggios. The enormous popular success some few of Rachmaninoff’s works had in his lifetime is not likely to last, and musicians never regarded it with much favor.’ Bernard Holland offered a more recent reworking of this perspective in his blistering New York Times review of the 1996 Australian movie Shine. Holland focused not on the film but on the central place it granted to Rachmaninoff’s Third Piano Concerto. ‘Treating “Rach 3” with awe,’ he scoffed, ‘“Shine” lowers musical values to fast-food levels.’

Enjoying Rachmaninoff’s music has in fact been linked to poor musical taste for over a century. In contrast to contemporary pianist-composer Aleksandr Scriabin, in 1912 Leonid Sabaneev denigrated Rachmaninoff’s music as that ‘of an intellectual whiner’, concluding ‘perhaps it has found such universal recognition, has so spontaneously subdued the musical masses, because there are many similar personalities [among them].’ The virulence of such attacks, which reduce Rachmaninoff to the status of a well-paid musical hack, whose music is nothing more than ‘an evocation of adolescence’, has in turn inspired several generations of Rachmaninoff’s advocates to uncover ‘progressive’ aspects in the composer’s music, his lifestyle (including his love of fast cars and boats), and his pioneering role in the recording industry. Lurking behind both these approaches is a modernist distrust of popularity– the suspicion that a composer who enjoys broad success must, by default, be ‘low-brow’.

The broader classical music audience has seldom questioned Rachmaninoff’s greatness, however. In 1941, the editor of the popular American music periodical TheEtude asserted that Rachmaninoff’s compositions ‘are likely to become among the most important contributions of our generation to the literature of music’. Rather than a sign of backwardness, Rachmaninoff’s stubborn adherence to tonal music was touted in a 1932 press release as a selling point:

Tall, austere, aristocratic in bearing, dignified, aloof and commanding on the concert platform. You might expect crashing dissonances, modernist music, from under those steely fingers and powerful biceps. Instead come delicacy, great emotional feeling, heart-searching, singing tone. ‘Music must reveal the emotions of the heart,’ says Rachmaninoff. He makes it do it.

Such marketing was effective. According to Time magazine in 1942, Rachmaninoff had earned over 2.5 million dollars over the course of his career in America. The regular appearance of his piano works on concert programmes, within conservatory walls and on recordings demonstrates that his style of emotional, heart-rending music found lasting appeal among audiences. Fans adored how his music echoed their own personal strivings, melancholy and failings amid a rapidly changing world, even as mid-twentieth century representatives of musical ‘modernity’ abhorred its lush chromaticism, complex harmonies and sweeping melodies.

In the Soviet Union, Rachmaninoff was similarly immortalized as a nineteenth-century Romantic composer. As musicologist Pauline Fairclough has noted, ‘far from staying outcast as a “white émigré”, after 1932 Rachmaninoff was effectively considered a “classical” Russian composer and presented as though he were a contemporary of Tchaikovsky (as opposed to being a modern composer who lived a comfortable émigré existence in the United States).’ Such an interpretation erased Rachmaninoff’s kinship with experimental artistic trends in late imperial Russia in favour of a nineteenth-century image purified of ‘mysticism’, much as Rachmaninoff’s mentor Piotr Tchaikovsky was redefined to suit Soviet values.

This book probes the ready-made image of Rachmaninoff the melancholic and nostalgic émigré to excavate a participant in the currents of Russia’s ‘Silver Age’, an era of experimentation wherein the role of art and music in human existence was heatedly debated.

Despite Rachmaninoff’s reluctance to engage in such philosophical discussions, his creative work took shape within them. In a 1919 interview, Rachmaninoff cited German philosopher Arthur Schopenhauer to support his claim that ‘melody is the supreme ruler in the world of music. Melody is music – the integral foundation of all music, since a perfectly conceived melody implies and develops its own natural harmonic treatment.’ He set numerous texts by Silver Age writers and participated in the revival of Russian Orthodox music. His preserved library at Villa Senar includes Russian translations of key influences in Silver Age thought, including German philosopher Friedrich Nietzsche and Russian religious philosopher Vladimir Soloviev.