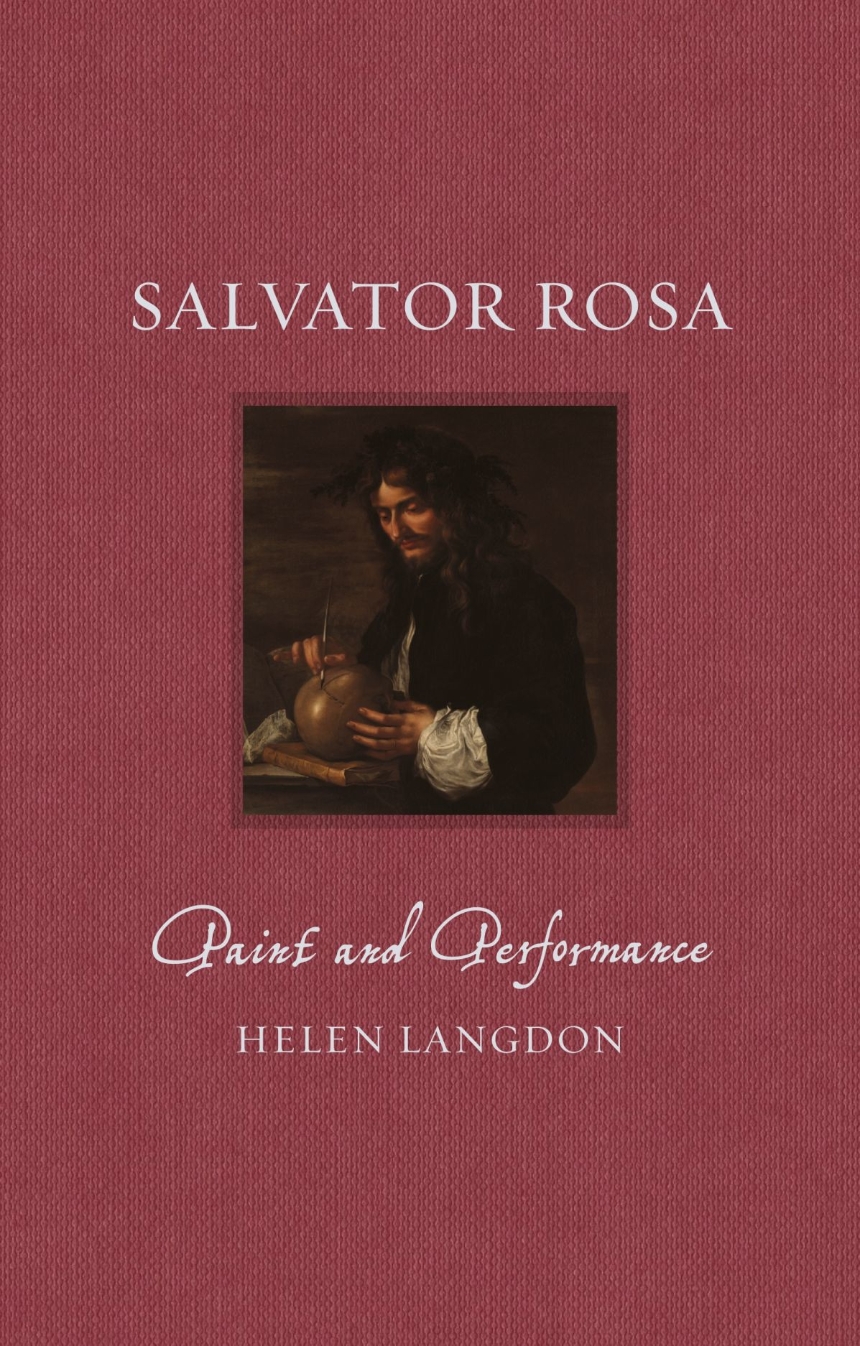 A compelling biography of the Renaissance painter, known equally for his magnetic personality and unusual subject matter: witchcraft and the sublime.

Painter, poet, and actor Salvator Rosa was one of the most engaging and charismatic personalities of seventeenth-century Italy. Although a gifted landscape painter, he longed to be seen as the preeminent philosopher-painter of his age. This new biography traces Rosa’s strategies of self-promotion and his creation of a new kind of audience for his art. The book describes the startling novelty of his subject matter—witchcraft and divination, as well as prophecies, natural magic, and dark violence—and his early exploration of a nascent aesthetic of the sublime.

Salvator Rosa shows how the artist, in a series of remarkable works, responded to new movements in thought and feeling, creating images that spoke to the deepest concerns of his age.

"Langdon takes on the intriguing figure of Salvator Rosa in this definitive account of the multitalented—but still elusive—artist (painter and etcher), writer, and actor. She is very much at home in the complex world of artistic debate in seventeenth-century Rome and deeply sympathetic to this difficult and ultimately disappointed ‘genius,' as he described himself, who aspired to be a philosopher-painter and satirist."

"Langdon’s engrossing presentation of the eccentric, conceited, and phenomenally talented Salvator Rosa restores one of Baroque Italy’s most illustrious artists to his rightful place among the seventeenth century’s absolute protagonists. Rosa’s phantasmagoric landscapes, home to strange animals, Etruscan priests, and weird witches, were once a must for every ambitious collector, but his most towering work of art, as Langdon suggests, may have been his own remarkable life."

"In his passionate defense of the creative autonomy of the artist, Salvator Rosa strikes us as astoundingly modern. Langdon’s superb biography, born of more than half a century of reflection on Rosa, presents the artist in all his brilliance and wit, his vaulting ambition, his potent originality as a painter, and his infuriating complexity as a person."

It was impossible, wrote Filippo Baldinucci, Salvator Rosa’s biographer, to describe to one who did not know the artist his spirited conversation, and the vivacity and sweetness of his thought. A Neapolitan, with arresting dark eyes and thick black hair that fell in waves across his shoulders, his curious and sprightly presence captivated those around him. Often described as ‘spiritoso’, ‘stravagente’ or ‘bizzarro’ he was one of the most charismatic and engaging personalities of seventeenth-century Italy, well known as both artist and phenomenon, and celebrated as a multitalented virtuoso, actor, musician, prolific correspondent, poet and painter. Vain, often boastful and tirelessly self-assertive, Rosa was above all ambitious, possessed by an overriding love and thirst for glory, and an inordinate desire to claim a place as ‘the first man of the century’.

In this book I trace the strategies of self-fashioning that the artist developed to claim the cultural pre-eminence he so desired, as he moved from Naples to Medici Florence and on to the grandest stage of Rome. Initially he painted genre scenes, landscapes and battle pictures, but his ambition grew, and he strove to cast off his lowly origins in the back streets of Naples, where dealers affectionately nicknamed him Salvatoriello, to be feted in Rome as a philosopher-painter of serious and esoteric themes. A series of self-portraits painted in Florence formed a dazzling publicity campaign, foregrounding his many roles, and at the same time displaying his skill. He presented himself as court painter seeking immortal fame through art; as an actor in the role of Pascariello, subversive, provocative, a dark Neapolitan prancing across the Medici stage; and as a philosopher-scholar, enjoying an ideal of solitude, and retreat. In the early 1640s he launched his career as a satirical poet, and, in the tradition of the Roman poet Juvenal, created a harsh and angry persona. He saw himself as heir to the great Stoics and Cynics of antiquity, the moral mentor of his age, virulently denouncing the corruption of modern times. In aspiring to excel in both poetry and painting, Rosa followed a Florentine ideal of artist-writers, promulgated by Vasari and most splendidly represented by Michelangelo. In Florence, too, Rosa saw the power of a circle of learned men to spread his fame. He enjoyed the life of the cultural academies, with their playful names and love of wit and jokes, where literature, art, poetry and theatre were discussed. These academies created large cultural networks, indispensable to an artist seeking to increase his social mobility. Rosa shone in these circles, and in the more informal conversazione, with their lively artistic debates that were held sometimes in bookshops and in artists’ studios. Skill in conversazione was increasingly a social marker in this time, and an area in which Rosa excelled. Many letterati wrote poems and eulogistic letters in his praise, and these circulated widely.

For a brief period in the 1640s Rosa was court painter to the Medici. Success at court was central to an artist’s career and it was with some courage that Rosa soon aggressively rejected it, claiming instead a new kind of professional freedom. He was to turn down prestigious invitations from four heads of state – King Louis xiv of France, Queen Christina of Sweden, Archduke Ferdinand Karl of Austria and Emperor Ferdinand III – commenting to his closest friend and chief correspondent Giovanni Battista Ricciardi, ‘I value, and will always value, a single moment of complete freedom more than centuries, even if golden, spent working in other people’s command.’ Rosa wished to live where he liked, surrounded by his friends, and to paint what he liked, and when he liked. This did not mean that he was free of the demands of patrons and clients, and he remained at their mercy. Wishing to cast off the traditional channels of advancement, he had to find new means and, more enthusiastically than any artist before him, Rosa saw the possibilities of the public exhibitions in Rome to make his name. Here he could present startlingly original works and attract new buyers. He constantly asserted his right to choose his subjects and refused to agree on a price beforehand, once remarking rudely to a prospective client ‘go to a barrel-maker or a builder, as they work to order’.

Nonetheless, Rosa’s subjects were sometimes chosen for him, and many of his paintings entered the great aristocratic collections of Rome. Yet he aspired to be acclaimed, as his contemporary Nicolas Poussin was, as a philosopher-painter, and to engage a new public of learned men, poets, scientists, bankers and many close friends, who replaced the conventional patronage networks and enjoyed his rare subjects. It is important to stress that in no way did Rosa create a private or consistent body of work, even less an art of dissent. He often poses in the then fashionable role of Stoic but he does not ponder any abstract philosophical doctrines, instead plucking motifs from them when it suited his aims. His satires, a series of lengthy literary self-portraits, present Rosa the Stoic, but in a manner rooted in the conventions of classical satire. Often his choice of subject seems casual, as when he asks Ricciardi for ‘something new, without too many figures, and if there’s also some figure in the air over a cloud or something else it won’t be a problem’. He stressed the value of novelty above all, ‘since Rome has learned that I’m most fantastical in my inventions and I must live up to that as much as possible’. Clearly he chased novelty, but his subjects would not have caught on without his intense awareness of the strains of thought and feeling that dominated the intellectual life of his learned friends. He chose themes that were central to seventeenth-century debates, such as whether the intellectual or moral man could live at court, the virtues of the simple life and the corrupting power of wealth. Seventeenth-century gallery-goers enjoyed paintings that provoked discussion, and some of Rosa’s choices of ambiguous and mysterious subjects would have pleased them.

In his later years Rosa became ever more obsessed with the baroque cult of novità, seeking rare subjects that would astonish his public. Again his themes – of magic and divination, of the earliest days of philosophy and learning – were central to contemporary culture, especially that of the scientific world of the Jesuits, and Rosa claimed there his place, as an intellectual or scientific persona. He was a showman, with an eye for a striking image, whose pictures reflected the wonders or meraviglie that were enthralling such eccentric natural philosophers as Athanasius Kircher, and he engaged with contemporary debates on the emerging aesthetic of the sublime. The originality of his art was complemented by his creation of a bizarre and often outrageous persona, one that was provocative and arrogant, a dark outsider whose hatred of mankind was modelled on that of the great misanthrope, Timon of Athens. He had a gift for preserving his outsider image while putting himself at the centre of intellectual worlds.

Rosa’s appetite for fame resounds through all his letters, and his creation of an alternative world of patronage was remarkably effective, but for a man of the seventeenth century there was no true greatness without social recognition. Rosa, rebel and outsider, was, paradoxically, entirely at one with this. His boastful letters are rich in descriptions of the visits of cardinals, ambassadors and men of letters to his studio, visits that increased his glory and spread his fame through Rome. He had, since his earliest years, been most successful as a landscape painter. This success caused him misery, for his deepest desire was to be accepted as a great figure painter of historical subjects and sacred histories and, above all, for his pictures to adorn the great churches of Rome. In this ambition he was aligned with the critical canons of his time that acknowledged figure painting as the artist’s highest achievement. Rosa wished to become part of the canon, to take his place beside the grandest of Old Masters, as can be seen from his etching The Genius of Salvator Rosa (illus. 49) in which he personifies Painting through a well-known figure from Raphael’s Transfiguration.

In this book I have presented the conflicts and paradoxes of Rosa’s career, and woven through the narrative of his art and life his strategies of self-promotion. I have chosen a series of remarkable works that represent his ambitions and have suggested the strains of thought and feeling to which he was so shrewdly responding. The book is ordered chronologically, showing how his ambitions were formed by and evolved in relation to the painters and writers around him, and how versatile his response was to new places and ideas. The landscapes, on which his fame in England has so long depended, here play a minor role, but perhaps Rosa himself would be pleased at this strong emphasis on his subject paintings. The artist’s letters, recently made available in English by Alexandra Hoare, are a remarkable resource. Nothing remotely like them is available for any other artist and they are invaluable to an understanding of the art world in seventeenth-century Italy. Through them I have tried to keep something of the texture of everyday life, as Rosa recounts his triumphs and his despair, his often black melancholy and his subversive humour.