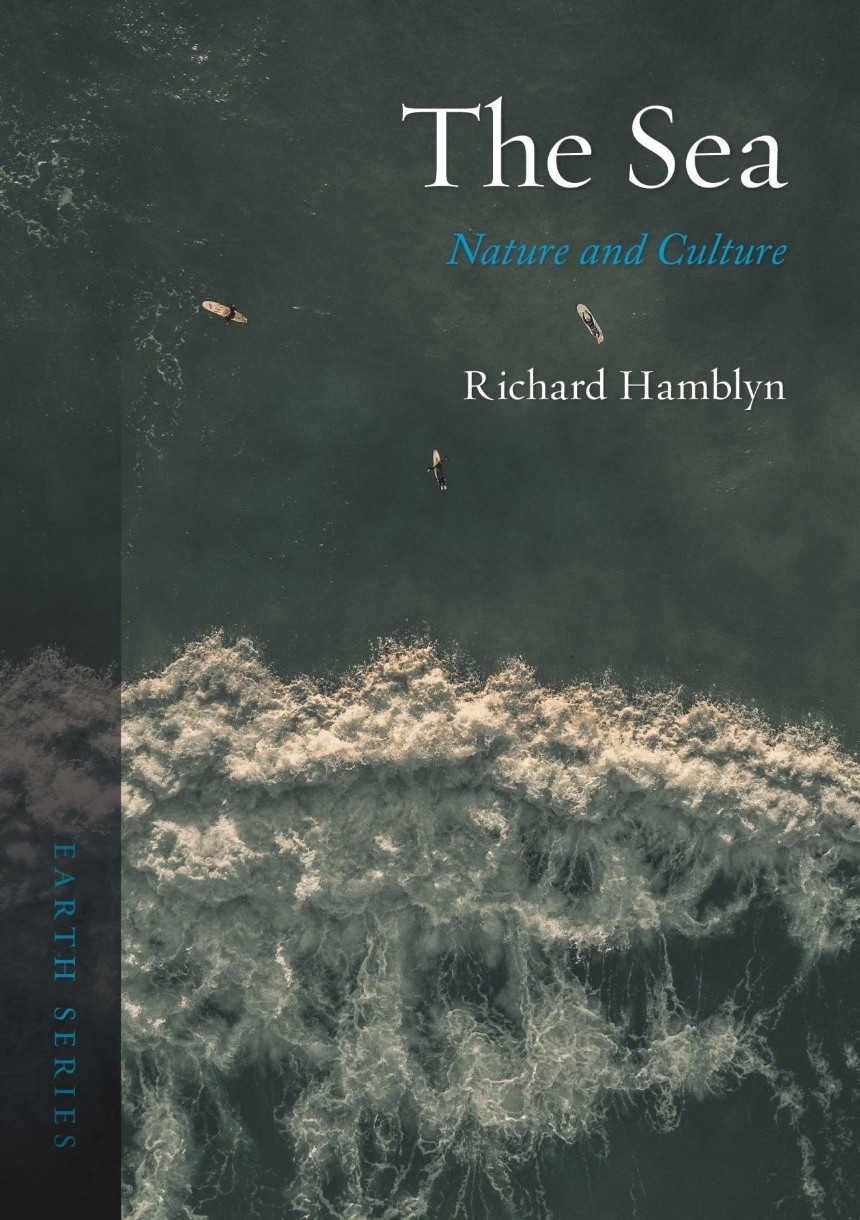 Sailing across time and geography, the imaginary and the real, The Sea chronicles the many physical and cultural meanings of the watery abyss.

This book explores the sea and its meanings from ancient myths to contemporary geopolitics, from Atlantis to the Mediterranean migrant crisis. Richard Hamblyn traces a cultural and geographical journey from estuary to abyss, beginning with the topographies of the shoreline and ending with the likely futures of our maritime environments. Along the way he considers the sea as a site of work and endurance; of story and song; of language, leisure, and longing. By meditating on the sea as both a physical and a cultural presence, the book shines new light on the sea and its indelible place in the human imagination.

"Hamblyn does justice to the ocean’s vast and mysterious nature. . . . This pleasant and edifying study will be a nice place to start for readers looking to learn more about the ocean."

"This new volume examines the physical, historical, literary, and sociocultural aspects of its title topic in a lively and extensively illustrated presentation suitable for the edification and enjoyment of a wide ranging readership. Those who have already discovered the Earth series should be very pleased at what they find in The Sea. And as for those for whom this would be their first experience of what the series has to offer, they may take comfort in knowing that if they enjoy it, there are twenty-six more volumes in the series that also delve into pertinent aspects of the planet we all call home."

“A whirlwind tour of the world’s seas and oceans . . . from oceanography and marine biology to the specialist language of seafarers to the sea as it is represented in art, music, film, and literature, to a dire warning of the sea’s vulnerability to anthropogenic global warming, overfishing, and the eternal life of plastics tossed unthinkingly into the sea. . . . What makes The Sea rare is Hamblyn’s intellectual agility, his capacity to write freshly (and with extraordinary economy) about everything he touches on. He holds my interest and admiration throughout this gorgeously illustrated book.”

Jonathan Raban, author of "Passage to Juneau: A Sea and Its Meanings" and editor of "The Oxford Book of the Sea"

Shorelines are liminal zones, elemental boundaries of crossings and transitions that do much to shape the cognitive worlds of coastal peoples. ‘Where does the sea begin and end?’ is a deceptively simple question, for while it is easy to define the shoreline – ‘the line where shore and water meet’, in the words of the Oxford English Dictionary – it is more difficult to find it, for a shoreline is a mutable space, its contours erased and rewritten twice a day by tidal variations. To watch an incoming sea encroach onto the land, then enact its slow reversal six hours later, is both a local and a cosmic experience, the demarcations of high and low tide merely the visible traces of planetary processes that are otherwise too big to see, with the Sun and the Moon exerting powerful gravitational drag on the waters of the rotating Earth. The Moon pulls our seas up towards it, creating a bulge in the oceans, which is then sent sweeping around the rotating planet by the near-equal force of inertia. This ever-moving ripple is experienced at the surface as the twice-daily tides, the ebbings and flowings of which have been objects of fear and fascination since before the expeditions of Alexander the Great (fourth century BC), whose generals, accustomed to the virtually tideless Mediterranean, were reportedly alarmed by the rise and fall of the waters of the Indian Ocean.

Watching sea waves advance and break is, as Jonathan Raban observes, ‘a pastime designed to induce reflective melancholy’, and shorelines have long associations with pensiveness and brooding, from Shakespeare’s Sonnet 60 (‘Like as the waves make towards the pebbl’d shore, / So do our minutes hasten to their end’) to Matthew Arnold’s ‘Dover Beach’ (1867), in which the sound of the advancing sea calls to mind the painful ebb and flow of human history:

Where the sea meets the moon-blanched land,
Listen! you hear the grating roar
Of pebbles which the waves draw back, and fling
At their return, up the high strand,
Begin, and cease, and then again begin,
With tremulous cadence slow, and bring
The eternal note of sadness in.

The poem, which was begun on honeymoon in the summer of 1851, enacts a movement from pleasure to pessimism, the latter drawing in like an unsettling tide that echoes ‘the turbid ebb and flow of human misery’. The poem’s central motif, the withdrawing ‘Sea of Faith’, is a variant of ‘the unplumbed, salt, estranging sea’ that was the defining emblem of Arnold’s earlier ‘Marguerite’ poems, which explored similarly pessimistic territory. Arnold once described himself as ‘one who looks upon water as the mediator between the inanimate and man’, and images of seas and rivers featured prominently in his work, symbolizing, in the words of the Arnold scholar Miriam Allott, ‘the hidden currents of the buried self ’, whose true nature, once known and understood, would rejuvenate an unhappy life.

Many of the circumstances of the setting and imagery of ‘Dover Beach’ would be borrowed by Ian McEwan for his honeymoon novella, On Chesil Beach (2007), in which the incoming waves, ‘whose steady motion of advance and withdrawal made sounds of gentle thunder, then sudden hissing against the pebbles’, prefigure the sexual catastrophe to come. Later in the story, after a humiliating episode, Florence runs onto the beach, followed by Edward; they argue, before Edward is left on his own to brood at the water’s edge, letting the waves wash over his shoes. As McEwan’s unhappy couple discovers, shorelines are places of stark exposure, where modernity recedes and the elements regain their ancient power, exemplified by the way that centuries of storm waves had sifted and graded the pebbles along the beach, depositing them in neat size order from east to west: ‘The legend was that local fishermen landing at night knew exactly where they were by the grade of shingle. Florence had suggested they might see for themselves by comparing handfuls gathered a mile apart’, but the tragic, Arnoldian misunderstandings that unfold over the rest of the novel conspire to thwart their littoral investigations, before blighting the rest of their lives.

The 180 billion pebbles that form Chesil Beach have indeed been sorted by the sea into size order, with the smallest found at West Bay and the largest at the Isle of Portland, 29 km (18 mi.) to the east. Chesil Beach (its name derives from the Old English cisel, ‘shingle’) is an extensive barrier beach that formed when pebbles were washed up en masse at the end of the last ice age, more than 5,000 years ago. Behind the 200-metre-wide (660 ft) strip of beach lies the Fleet, a shallow tidal lagoon cut off from the English Channel, and rich with fossils, as are many other sites along southwest England’s Jurassic Coast.

The sea-sculpted complexity of Earth’s coastlines, with their inlets, river mouths, firths, fjords, promontories, beaches, tombolos and isthmuses, is the product of what Robert Macfarlane has called ‘the dialogue between solid and liquid’, the relative hardness, softness, porosity or impermeability of coastal materials determining how the actions of seawater will shape and refine them over time.6 If there is poetry in these languages of coastal topography, it has arisen in response to the intricacy of its geophysical arrangements, and the classificatory challenge of a landscape in perpetual flux. Beaches have their ‘breaker zones’, ‘swash zones’, ‘surf zones’, ‘transition zones’, ‘backshores’, ‘foreshores’ and the like, while a glance at the ‘Coastlands’ section of Macfarlane’s Landmarks (2015), his celebration of the global topographical lexicon, confirms how many words reflect the changeability of the littoral landscape, from Shetland’s ‘ar’ris’ (the last weak movements of a tide before still water) to the Cornish ‘zawn’ (a vertical fissure or cave cut into a cliff by waves), via ‘gunk-hole’ (a narrow channel rendered too dangerous to navigate by the current); ‘oyce’ (a lagoon formed where a bar of shingle has been thrown up across the head of a bay); ‘tombolo’ (a ridge of sand built by waves that connects an island to the mainland); or ‘vaddel’ (a gulf that fills and empties with the flowing and ebbing of the sea).

As such language attests, near-shore topography is a world apart from the open sea, calling for different forms of experience and understanding, as well as a different vocabulary. Naval captain Greenville Collins, in his Great Britain’s Coasting Pilot (1693), the first official survey of the British coastline, drew a memorable distinction between the skills needed for navigation at sea and those needed in inshore waters: ‘The Marriner having left the vast Ocean, and brought his Ship into Soundings near the Land, amongst Tides or Streams, his Art now must be laid aside, and Pilottage taken in hand, the nearer the Land the greater the Danger, therefore your care ought to be more.’

The risk to shipping increases as land draws near, the shoaling effect of the rising sea floor affecting the complex interactions of waves, currents, seabed and shore. As a wave enters shallow water, its height increases while its wavelength decreases; as the wave steepness (the ratio of wave height to wavelength) increases, so the wave becomes less stable. The movement of a wave up a beach is known as the ‘swash’, with its reverse movement known as the ‘backwash’, the relative strength and stability of these movements determining how dangerous a wave might be to approaching craft, whether the wave is a ‘spilling wave’ (a softer and more consistent wave that breaks gradually as it approaches shore); a ‘dumping wave’ (a low-tide wave that breaks powerfully in shallow water); or a ‘surging wave’ (a non-breaking wave that retains its power and momentum). All three wave types are made of water on the move, unlike the waves of oscillation encountered out at sea, in which energy, not water, is transferred from crest to crest. These beach waves, known as waves of translation, act differently from sea waves, as they race up the beach, riding over one another in chaotic, hazardous patterns that can be difficult – and dangerous – to navigate.

In Stephen Crane’s autobiographical story ‘The Open Boat’ (1897), a foundered ship’s lifeboat off the coast of Florida turns back from land when the surging waves at the surf zone prove too dangerous to approach:

The billows that came at this time were more formidable. They seemed always just about to break and roll over the little boat in a turmoil of foam. There was a preparatory and long growl in the speech of them. No mind unused to the sea would have concluded that the dinghy could ascend these sheer heights in time. The shore was still afar. The oiler was a wily surfman. ‘Boys,’ he said swiftly, ‘she won’t live three minutes more, and we’re too far out to swim. Shall I take her to sea again, Captain?'
‘Yes; go ahead!’ said the captain.
This oiler, by a series of quick miracles and fast and steady oarsmanship, turned the boat in the middle of the surf and took her safely to sea again.