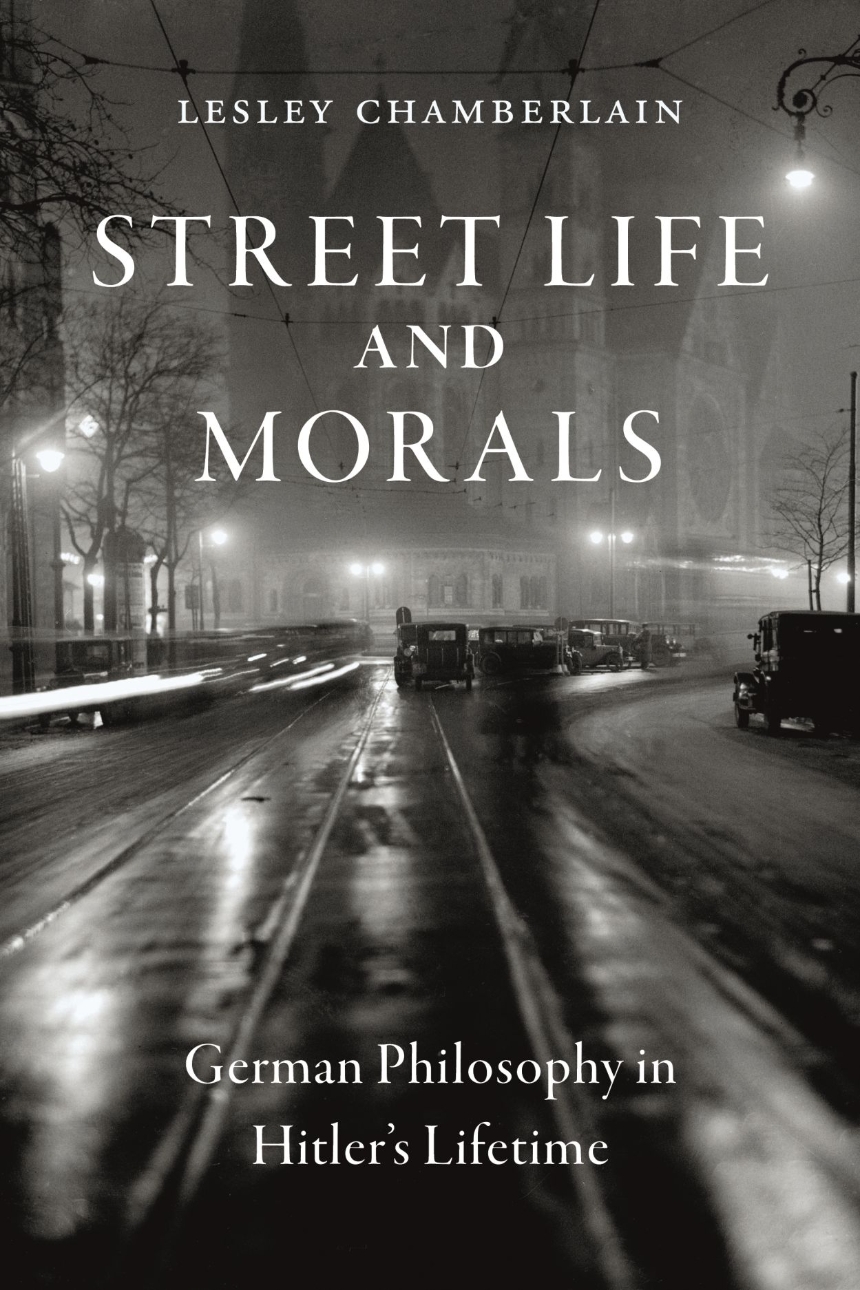 With resonance for today, this book explores a significant crisis of German philosophy and national identity in the decades around World War II.

German philosophy, famed for its high-minded Idealism, was plunged into crisis when Germany became an urban and industrial society in the late nineteenth century. The key figure of this shift was Immanuel Kant: seen for a century as the philosophical father of the nation, Kant seemed to lack crucial answers for violent and impersonal modern times. This book shows that the social and intellectual crisis that overturned Germany’s traditions—a sense of profound spiritual confusion over where modern society was headed—was the same crisis that allowed Hitler to come to power. It also describes how German philosophers actively struggled to create a new kind of philosophy in an effort to understand social incoherence and technology’s diminishing of the individual.

“Chamberlain’s study is a masterly analysis and interpretation of the fate of mainstream Kantian philosophy in Mr. A.H.’s lifetime, as the tradition of individual autonomy and high moral earnest failed to come to terms with the modern challenges of mass culture and technologization. But Chamberlain shows too how, from the rubble, just these elements—from Benjamin and Cassirer, Adorno and Arendt, and, yes, even Heidegger—were used to rebuild the house of German philosophy in today’s form. Her study combines vast scholarship and formal ease with crystal lucidity and a beguiling confessional dimension.”

"This important, lively work tracks the failure of two generations of post-idealist philosophers to reconceive—in light of the social and economic upheaval that emerged during the lifetime of Adolf Hitler—Immanuel Kant’s conception of autonomy and moral personhood. . . . This work is a must read for anyone concerned, as were the philosophers Chamberlain discusses, about the place of meaning, value,and autonomy in a disenchanted world that tends toward biologism and both technological and scientific reductionism. Chamberlain writes from a seat of deep learning, but she has the ability to make the most abstruse ideas clear and relevant to the narrative of her intellectual history of this period. . . . Highly recommended."

In Hitler’s lifetime, 1889–1945, Germany experienced poverty and despair, reconstituted itself aggressively and hysterically, and tried to murder every last Jew in Europe. The Austrian-born Führer was the trigger for much of this abomination, and one of the causes. But this book, which borrows from Hitler only the duration of a deservedly aborted life, addresses something quite different. It asks what bothered German philosophers in those 61 revolutionary and chaotic years, and finds that it was how human beings could possibly understand each other. It concerned both academic and independent thinkers. This was not their only preoccupation but the way it arose reflected the same social difficulties that brought Hitler to power. And so, in the history of philosophy, it seems to be a matter of special interest.

What I mean by philosophy, as it was in Germany a century ago, is a systematic inquiry into the possibility of knowledge and truth: philosophy as Wissenschaft. The term is invariably translated as ‘science’ but in the humanities that equivalent is sometimes misleading. For Kant, German philosophy’s presiding genius from his death in 1804 to the times that concern us, it was the relationship between that scientific knowledge and moral truth that was crucial. That link in turn had distinct repercussions for German philosophy and society.

I do not think philosophy is directly related to its times, but that the connection is almost always there, in every epoch, indirectly. In Nazi Germany a good number of lower-level practitioners of philosophy and some leading figures erred politically. But it does not seem to me fruitful, for philosophy and wiser understanding, only to focus on that weakness. The story of German philosophy in the early twentieth century has so much more to tell us.

It is striking for instance how certain traditional humanist ways of thinking reached their limit and disintegrated in the critical German long half-century that culminated in Nazism. A worry about intersubjectivity, about how I relate to You in a technologically advancing age, was more than thirty years old when Hitler became Chancellor. A troubled society produced both the question and the demagogue who exploited the lack of a solution.

The gist of this book is therefore both a survey of where and how traditional German Idealism fell short, and a consideration of how two successive generations of post-Idealist thinkers thought they could remedy it. In ‘The Challenge from the Streets’ I evoke the intense social, economic and urban transformation driving philosophical upheaval in the last decade of the nineteenth and the first forty years of the twentieth century. The philosopher and sociologist Georg Simmel is a key interpreter and theoretician of the period up to the First World War. I also look at the artistic and intellectual culture more generally. Between 1900 and 1920 contemporary painting, sculpture, drama, poetry and literary prose tell us so much about the great upheaval in German values. They show us that the times were vivid with pain and collision and a loss of human bearings. One of Simmel’s most gifted students, Siegfried Kracauer, provides a philosophically informed commentary on an imperilled society from around 1920 until 1933.

In ‘The Collapsed House of Bourgeois Ideas’ I turn more specifically to the history of Kantianism in Germany. Among the older generation Hermann Cohen and Heinrich Rickert tried to adapt Kant’s eighteenth-century Enlightenment philosophy to the new social circumstances of urban industrial life in the twentieth. When the forces of philosophy regrouped after the First World War the Idealist Ernst Cassirer and the phenomenologist Edmund Husserl occupied the leading academic positions in the country, closely followed by Martin Heidegger, who offered his transformative outlook on our Being in the World. All three had a distinct relationship to Kant, but Heidegger had the most explicit mission to unsettle, dismantle and rebuild.

When Heidegger and Cassirer publicly debated the relevance of Kant in 1929, under growing political pressure on all sides, their quarrel became one of the defining moments of interwar German philosophy. ‘New Philosophy out of the Rubble’ picks up the moment when, in their wake, a whole generation of independent thinkers emerged. As sociology pushed philosophy to answer questions about human interaction, technology and the limits of reason, so thinkers emerged like Kracauer, Theodor Adorno, Max Horkheimer, Walter Benjamin and Hannah Arendt, with startlingly fresh answers. Adorno was Kracauer’s informal pupil; Walter Benjamin had attended the lectures of the neo-Kantians Rickert and Cohen, and of Simmel; Arendt was Heidegger’s pupil. It’s notable that with the exception of Heidegger all of this third generation found themselves pulled into sociology and journalism as part of their response to the limits of philosophy as Wissenschaft. They became professional writers, and though they were still recognizably philosophers, the classical tradition that spawned them was now under radical revision. A breadth and an academic unorthodoxy characterized their work. As philosophers they could no longer, with Aristotle, rate theory higher than practice. Or they had to try not to. Their times and their thinking were coloured more or less intensely by the Marxism of Georg Lukács, Ernst Bloch and Karl Korsch, and as a result the interwar period was a complex and nuanced scene of philosophy, full of signals for all of us also in the present day.

I end, in ‘The Possibility of Life Together’, by suggesting that German philosophy in the lifetime of Hitler, rich and modern, stimulated by inherited intellectual wealth and under pressure from radical social change, was the positive outcome of a world Hitler otherwise destroyed. At the same time it strayed so far from academic confinement that method and discipline were difficult to name.

The question arises why this picture, or map, which I am trying to create should be relatively unfamiliar, or if familiar then unwelcome, at least in Britain, from where I am writing. Jonathan Rée recently observed of the prevailing attitude to German philosophy in England after the Second World War that ‘In Britain philosophy had a public reputation as typically Teutonic and probably complicit in the chronic extremism of German culture and politics.’ I also believe that is the case. Ever since 1945 the assumed political connection has invited a hunt either for deficiencies in the tradition – usually deficiencies of nationalism – or for direct Nazi sympathizers. Of course they can be found. But should Kant be taken as an example? I can’t help recalling a little barb the British philosopher Anthony Quinton aimed at Kant some time after the war: ‘Kant, with his university post, his regular habits, and the crabbed technicality of his writing, is more the ideal of a philosophy professor than of a philosopher proper.’

What Quinton meant with that ad hominem and not exactly professional verdict, I think, was that Nazism proved that Kant had always been wrong. Kant was simply the wrong kind of man (German) to achieve anything decent in the line of true inquiry (not German). Quinton, an Oxford philosopher in a quite different tradition, empirically based and recently oriented towards the analysis of language, was by contrast a proper philosopher. I must sympathize with him. He was personally scarred by the war. Further, when he mourned ‘the sinking of the great ship of European culture by Hitler’, he was certainly right that the cultural ship had gone down. I sympathize with several generations of Britons who could never bring themselves to accept Germany and Germans after the war. But I do think that in the twenty-first century it leads to unproductive and belated searches for the moral high ground. Or is it my peculiar weakness to find German culture, before both wars, incomparably rich and not to be written off as part of military defeat?

In 1969 the art historian and public intellectual Kenneth Clark declared a deeply negative view of German art, associating its inwardness and melancholy, as he perceived them, with the recent world catastrophe caused by Nazi Germany. Clark experienced a loss of civilization just as Quinton did. Histories of German philosophy even forty years ago, including those written by Germans, more or less agreed.

Yet most of the thinkers I talk about in this book considered the great collapse already to have happened, at least in their own nation, in 1914–18, or earlier, with the brutal industrialization of old Germany. Their orientation as philosophers was exactly that, and that they had to pick up the pieces and look to a new future. Thirty years before Hitler became the German Chancellor German philosophy, with sociology on its margins, was already searching for how to embrace, conceptually or otherwise, the confusion and disorder in society which had helped make Hitler possible. Radical new forms of art and philosophy were required in response to a technologically enabled but spiritually damaged European humanity. That indeed is the main reason why the powerful and original responses to modernity, of the men and women of the 1900s, and the 1920s and ’30s, on behalf of philosophy, still speak to us, in ways in which Quinton does not, and Clark only partially.