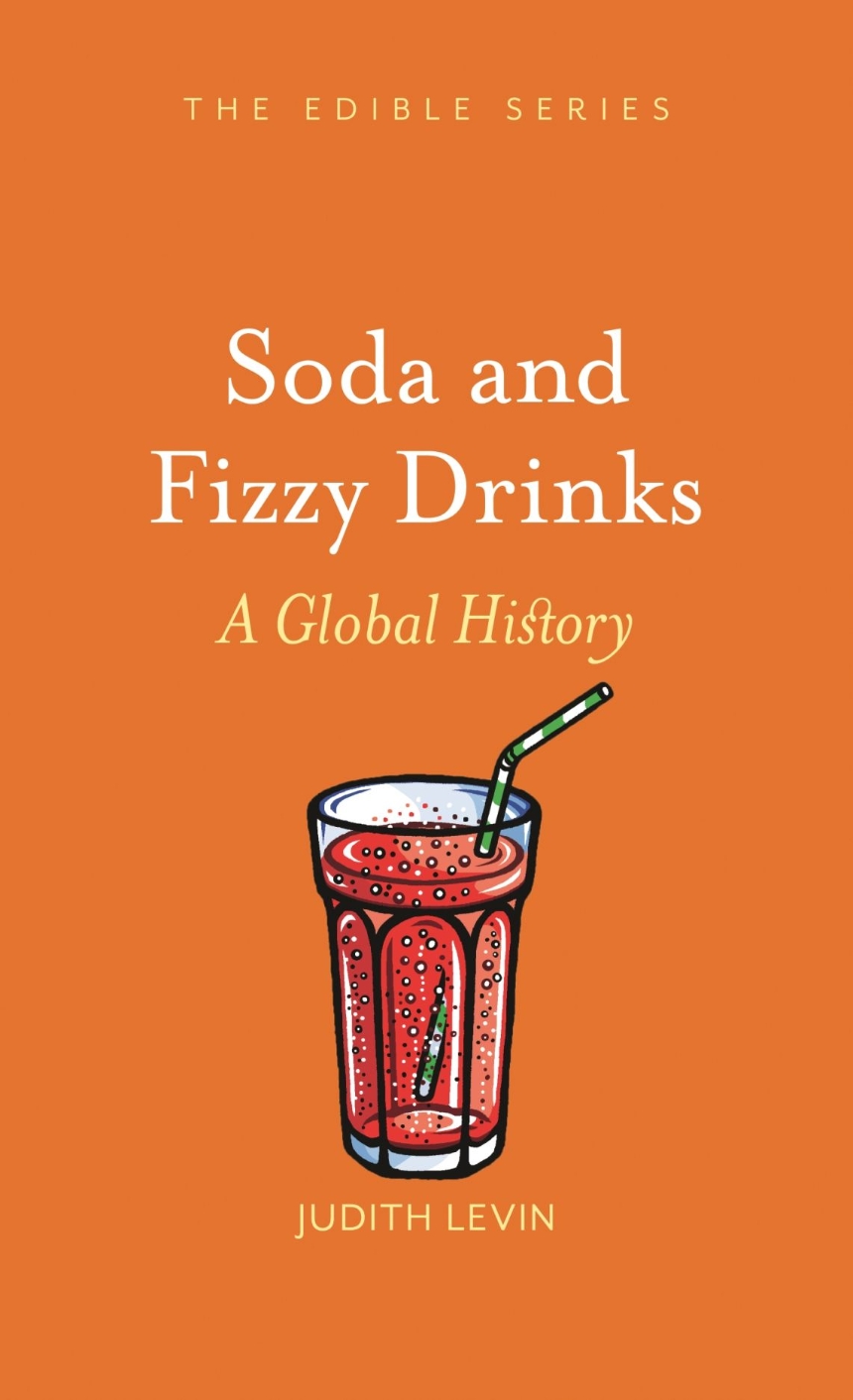 An effervescent exploration of the global history and myriad symbolic meanings of carbonated beverages.

More than eighty years before the invention of Coca-Cola, sweet carbonated drinks became popular around the world, provoking arguments remarkably similar to those they prompt today. Are they medicinally, morally, culturally, or nutritionally good or bad? Seemingly since their invention, they have been loved—and hated—for being cold or sweet or fizzy or stimulating. Many of their flavors are international: lemon and ginger were more popular than cola until about 1920. Some are local: tarragon in Russia, cucumber in New York, red bean in Japan, and chinotto (exceedingly bitter orange) in Italy. This book looks not only at how something made from water, sugar, and soda became big business, but also how it became deeply important to people—for fizzy drinks’ symbolic meanings are far more complex than the water, gas, and sugar from which they are made.

“A sweeping history of soft drinks . . . [that includes] coverage of patent medicines, the science of fizz, the politics and worldwide spread of Coke and Pepsi, and the wide range of ingredients, drugs, and sweeteners that have gone into these drinks.”

Mark Pendergrast, author of "For God, Country and Coca-Cola: The Definitive History of the Great American Soft Drink and the Company That Makes It"

Fizzy drinks have many beginnings and many histories.

They began with naturally occurring mineral waters that bubbled up from the ground, and the belief in their curative properties, and then in the efforts of chemists to replicate them and pharmacists and others to dispense them. The first fizzy water ‘flavours’ included Spa, Pyrmont, Vichy, Ballston and Selter (that is, seltzer), named for the places where the natural springs were found.

Fizzy drinks also begin as part of the larger category of soft drinks, as distinguished from hard, or alcoholic, drinks. These soft drinks are sometimes cold and sweet, and people like the taste of different ones in different places. Throughout their history, carbonated sweet drinks competed with other local drinks, existed alongside them and were perhaps influenced by their taste.

Soda pop, in the United States, arose out of the nineteenth-century tradition of patent medicines that promised miracle cures and personal transformation, and whose advertisements changed promotional campaigns forever. In England and Scotland, too, some fizzy drinks originated in tonics and medicinal drinks. Flavoured fizzy water was also used by pharmacists to hide the taste of bitter medicines.

Ironically, then, sweet carbonated drinks originate in three traditions that were supposed to be healthful.

Before ‘soda fountain’ meant a place to buy a fizzy drink, or the machinery that dispensed it, it meant a place where naturally occurring mineral waters bubbled up from the earth. The ancient Romans called the springs aqua saltare, or dancing water, and believed in the benefits of bathing in these waters at such places as Vichy and Pyrmont, France; Nieder-Selters, Germany; and the city of Aquae Sulis – later called Bath, England. By the sixteenth century, the waters were drunk as well as bathed in, and Spa, Belgium, had given its name to the historic treatments associated with the mineral benefits of the springs. In the American colonies, too, springs in such places as Ballston in Saratoga, New York, had in the past attracted the attention of native peoples, and then that of the doctors and philosophers of the colonizing Europeans. Thomas Jefferson and George Washington were among those interested in the possible curative value of mineral waters.

Soaking in hot water eases a variety of aches, and a change of diet and routine may have made people feel better, but the curative powers of drinking the waters did not, in truth, extend to the cure of ‘kidney stones, scrofula, salt rheum, erysipelas, dyspepsia, general disability, chronic consumption, catarrh, bronchitis, constipation, tumours, piles and cancerous affections’, as claimed by one bottler of mineral waters in the years following the American Civil War. On the other hand, when Dr Frederick Slare presented his analysis of Pyrmont Waters to the Royal Society of London in 1717 he noted that these waters were
chalybeate: that is, they contained iron, and were ‘indicated in all diseases which are caused by anaemic composition of the blood’. Indeed.

Scientists and entrepreneurs were fascinated by waters that tasted good or at least seemed to cure disease even if they tasted bad. Even though – to a limited extent—the natural waters could be bottled, the bottled waters tended to lose their fizz, and shipping them was expensive. The researchers wanted to understand the nature of the fizz in order to duplicate it. Motives ranged from scientific curiosity—what was that fizz, anyway?—to wanting, altruistically, to make the water cures available to people who could not afford to go to the springs, to wanting to make money by supplying water to customers. Thus the search for artificial fizzy mineral waters embodied many of the strands of the later industry: the product is a medicine, a source of pleasure, a series of technological problems—and a cash cow.

Although the British scientist, clergyman and political theorist Joseph Priestley is frequently credited with being the first to put fizz into still water, in the 1770s, he was building on the work of scientists before him. In 1620 the Flemish chemist Jan Baptista van Helmont coined the word ‘gas’; the gas of sparkling waters was identified as carbon dioxide only in 1792. Yet even without the knowledge of the gas’s chemistry, scientists were able to extract it from chalk or limestone and to understand that it was different from ‘common air’. In the 1750s Joseph Black called it ‘fixed air’ and recognized it as the gas produced by fermentation. David McBride, an Irish surgeon, identified it—hopefully, though incorrectly—as an antiscorbutic: something that would prevent or reverse scurvy, long a concern of explorers and navies.

Travelling to the brewery near his home in Leeds, Priestley recognized the ‘fixed air’ fizzing above the vats of fermenting beer. By quickly pouring still water back and forth from one glass container to another above the vats, he created a mild effervescence as the water absorbed the gas. He later created this gas by combining sulphuric acid and chalk in a bottle, thereby creating carbon dioxide, and capturing it in a pig’s bladder. Priestley then transferred it into an inverted, water-filled bottle and shook this container until the water had absorbed the gas. Priestley’s Directions for Impregnating Water with Fixed Air (1772) received the highest honour awarded by England’s Royal Society—ironically, for his work in creating an antiscorbutic. Both the Royal Society and Priestley had made a false connection between the slightly acidic bright quality of the water and the acid of lemons and limes, fruits long recognized as antiscorbutics.

By 1774 Dr John Nooth had copied Priestley’s method but made the apparatus entirely of glass. No more animal bladders. A slightly improved version of Nooth’s device was marketed, and by 1777 more than a thousand had been sold to people living as far away as the East Indies. Under the name ‘gasogene’ or ‘seltzogene’, versions of this device were used for home carbonation into the twentieth century. Even Sherlock Holmes had one. Additionally, using Nooth’s apparatus, merchants began to sell artificial Seltzer and Pyrmont waters. One such merchant was Thomas Henry, who sold the waters at his apothecary shop in Manchester, England.

However, it is Jacob Schweppe who is most responsible for launching artificial fizzy waters.2 The German-born master jeweller was living in Geneva when he read Priestley’s work on the carbonation of water and built a copy of Priestley’s device. Disappointed by the quality of the carbonated water it produced, he began to tinker with it. He also built a machine, based on a suggestion of Priestley’s, that used a ‘condensing engine’, a pressure pump which caused more gas to be absorbed by the water, and then improved upon that. Schweppe moved to London in 1792 to produce and sell aerated water of a quality that was superior to anything on the market. Nonetheless, he struggled with his competitors, business partners and distribution. Only when he was close to giving up did he receive the endorsements of British scientists and physicians that would lead to his becoming the most profitable supplier of artificial mineral waters in London. Many of the achievements of the Schweppes company came after the business was sold in 1798. It was in the early years of the nineteenth century that Schweppes products were exported throughout the British Empire and the company became the mineral water supplier to Britain’s upper class and royalty.

The directions in which soda and soda flavourings were initially taken—and the drinks they largely replaced—were dictated by the various liquids that people around the world already drank. Wherever fizzy drinks travelled, local drink flavours were generally adapted to become fizzy-drink flavours.

People drank water, but water, aside from mineral waters, was the drink of the poor, of those with no other options. The royal patent in 1236 to pipe water from Tyburn to London provided water for ‘the poor to drink and for the rich to dress [cook] their meat’. Fresh water at that time might not have been an option because it was unavailable, especially in cities or on shipboard, because it was considered unhealthy (due to contamination or people believing cold drinks were dangerous) or because it was boring.

By the eighteenth century, the drinking habits of the Americans and the British had been changed by the adoption of new drinks: tea, coffee and chocolate. Historian John Burnett identifies a ‘hot drinks revolution’ in the seventeenth century, when the newly imported beverages began to replace the porter that many—Samuel Pepys, for one—drank at breakfast. Their arrival coincides with the introduction of cheap cane sugar imported by the West India Company, so that these somewhat bitter drinks could be consumed sweetened, as they had not been in their countries of origin. They also introduced consumers to caffeine.