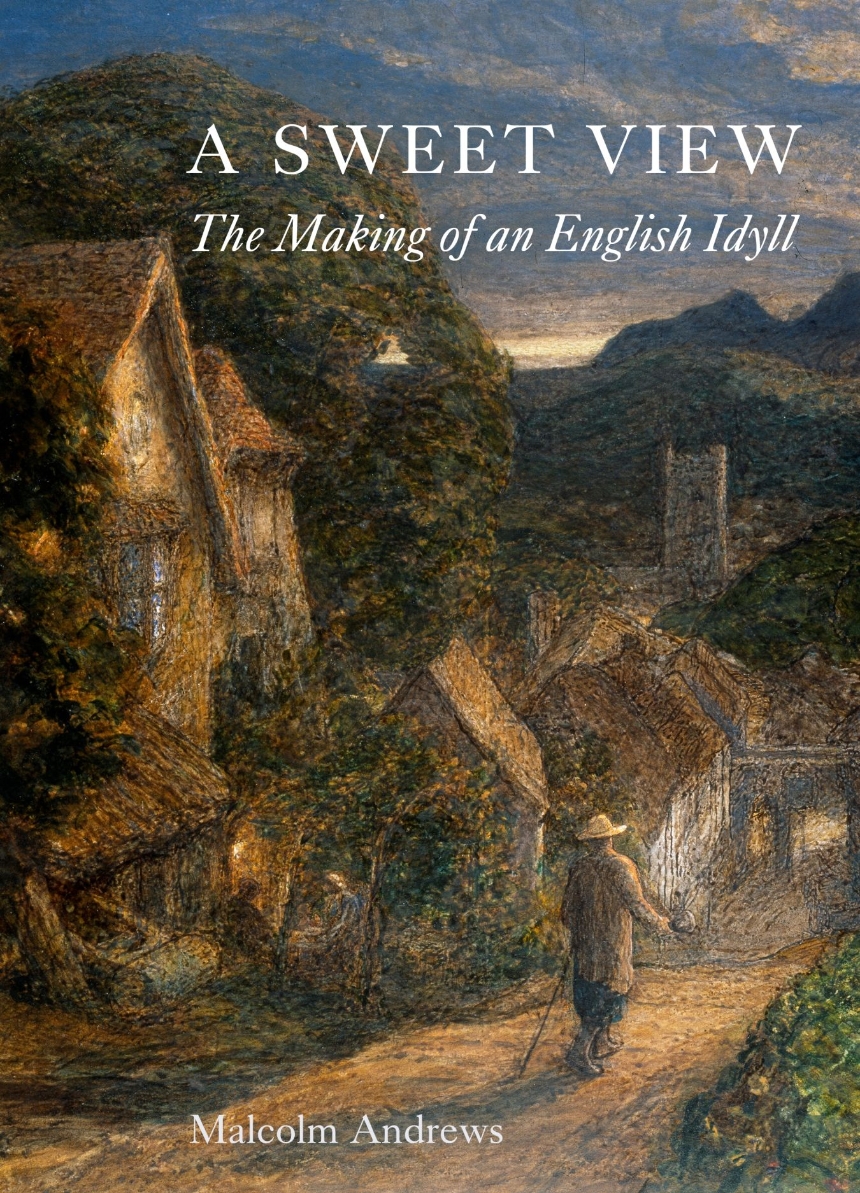 The Making of an English Idyll

The Making of an English Idyll

From country lanes to thatch roofs, a stroll through the enduring appeal of the nineteenth-century trope of rural English bliss.

A Sweet View explores how writers and artists in the nineteenth century shaped the English countryside as a partly imaginary idyll, with its distinctive repertoire of idealized scenery: the village green, the old country churchyard, hedgerows and cottages, scenic variety concentrated into a small compass, snugness and comfort. The book draws on a very wide range of contemporary sources and features some of the key makers of the “South Country” rural idyll, including Samuel Palmer, Myles Birket Foster, and Richard Jefferies. The legacy of the idyll still influences popular perceptions of the essential character of a certain kind of English landscape—indeed for Henry James that imagery constituted “the very essence of England” itself. As A Sweet View makes clear, the countryside idyll forged over a century ago is still with us today.

"[Andrews] offers a rich and readable account that draws not only on a wide variety of literature—Austen’s Emma is the source of the 'sweet view' of the title—but also on an extensive social and political context, one that encompasses industrialization, urbanization, and the agricultural changes that shaped both the landscape itself and ideas about it."

"In this lavishly illustrated and illuminating study Andrews . . . provides the reader with a clear-headed and thoughtful guide to the way in which English culture came to be imbricated in perceived links between humanity and the environment. . . . This finely articulated study can be recommended reading for everyone with an interest . . . in the broader context of landscape history and art over the last two hundred years."

"In this examination of changing perceptions of English landscape, combining meticulous scholarship with new and original readings of a galaxy of writers and artists, Andrews guides us from the Georgian fondness for neat fields and tree-lined hedges, through Picturesque excursions, Victorian retrospection, and Edwardian nature-writing, to uncover the enduring yet illusory image of 'Englishness,' distilled in church spires, cottages, and village greens. Subtle, engaging, and perceptive, and wonderfully illustrated, A Sweet View is a book to return to again and again."

Jenny Uglow, OBE, author of biographies of Edward Lear, Elizabeth Gaskell, and Thomas Bewick, as well as the award-winning "The Lunar Men"

"A really delightful survey of what is now a desperately relevant subject: how we should treasure an ever more threatened English landscape."

“Andrews brings a wealth of scholarship to the currently inflamed idea of Englishness as portrayed by English artists and described by English authors. It is—a rare word of praise to use in this context—a beautiful book both to read and to look at. Above all, relish.”

Jane Austen’s heroine, Emma Woodhouse, is viewing Donwell Abbey, the country estate of Mr Knightley, the gentlemanly character she is eventually to marry. She warms to what she sees, just as her narrator seems to do in summarizing it as a scenic idyll of Englishness. The landscape becomes an index of the physical and moral qualities ascribed to the national identity, as the repetition of ‘English’ underlines: comfort, control, moderation (that mild bright sunshine). Here, in more detail, is what Emma’s gaze was absorbing:

She viewed the respectable size and style of the building, its suitable, becoming characteristic situation, low and sheltered – its ample gardens stretching down to meadows washed by a stream, of which the Abbey, with all the old neglect of prospect, had scarcely a sight – and its abundance of timber in rows and avenues, which neither fashion nor extravagance had rooted up . . . The considerable slope, at nearly the foot of which the Abbey stood, gradually acquired a steeper form beyond its grounds; and at half a mile distant was a bank of considerable abruptness and grandeur, well clothed with wood; – and at the bottom of this bank, favourably placed and sheltered, rose the Abbey-Mill Farm, with meadows in front, and the river making a close and handsome curve around it.

I want to linger a while before this view. Emma’s rhapsodic response gives my book its title, and as the portrait of the house and landscape of Donwell is amplified over these paragraphs certain features come into focus that bear on the undertaking of this book. First, some of the terms themselves.

What about that word ‘sweet’? In our usage today ‘sweet’ has acquired a lot more sugar. It hovers on the edge of suggesting something cloyingly cute, probably petite too. In Jane Austen’s time it certainly had that meaning of honey-sweet on the palate, but it also applied more broadly, as when we describe someone as ‘sweet-tempered’. In one of her letters Austen describes the delightful prospect of a journey into Kent with her brother as ‘a very sweet scheme’. That is the sense in which she uses it here in Emma, as the object of her heroine’s gaze stirs benign feelings. The sweet view is not yet the ‘chocolate-box’ view.

The Donwell landscape is welcomed as a product of English ‘culture’. The term ‘culture’ here fuses the human and the environmental. In Austen it could denote both the managed landscape (as in horticulture) and a person’s social and moral education (a cultivated individual). Earlier in Emma, a character’s upbringing is described thus: ‘Living constantly with right-minded and well-informed people, her heart and understanding had received every advantage of discipline and culture’ (ch. 20). The Donwell estate has also had ‘every advantage of discipline and culture’; that is one reason why for Emma and her narrator it exudes ‘comfort’.

‘English verdure, English culture, English comfort’: this is a significant sequence. Verdure is the countenance of the raw material; subjected to the ‘right-minded’ discipline and culture, that natural asset is processed into a comfortable and specifically ‘English’ locus amoenus – Donwell Abbey’s house and grounds. The house and its land are construed as manifestations of English naturalness and sincerity (it ‘looked what it was’, without any pretensions), and as a reflection of their owner. Mr Knightley is a man of exemplary modesty and integrity, and his gentlemanly values (a product of English culture) are externalized in his estate and home. The house is not an off-the-peg designer mansion, for instance in the fashionable imported Palladian style; it seems to have grown over time in a natural way, shaped by its changing domestic needs – ‘rambling and irregular, with many comfortable and one or two handsome rooms . . . just what it ought to be, and it looked what it was’ (ch. 42). This touches on what would become a familiar Victorian prejudice in favour of an apparently organic ancient architecture that was content with its irregularity – a point made explicitly by the late Victorian nature writer Richard Jefferies:

Our old English folk [liked their rooms to be] of many shapes, and not at right angles in the corners, not all on the same dead level of flooring . . . each part of the house had its individuality. To these houses life fitted itself and grew to them; they were not mere walls, but became part of existence. A man’s house was not only his castle, a man’s house was himself.

Jefferies’s description epitomizes the English picturesque. The house defies rule-and-line regularity and smoothness; it expresses a quirky individuality; it is a reassuring image of continuity with Old England. ‘A man’s house was himself’: Mr Knightley’s house is very much ‘himself’, not a showpiece for visiting sightseers. So are his grounds. They resist fashionable taste with their ‘old neglect of prospect’ (that is to say, their neglect of managed vistas, eye-catchers and so on), and they repudiate extravagance by the attentive husbanding of timber.

Knightley’s surname implies his embodiment of the finest English qualities, and his first name, George, associates him with England’s patron saint. His championship of the values associated with Englishness is made even clearer by his criticism of the character of his ostensible rival in Emma’s affections, Frank Churchill. When (in ch. 18) Emma declares herself delighted by Churchill’s easy charm, Knightley checks her enthusiasm: ‘No, Emma; your amiable young man can be amiable only in French, not in English. He may be very “aimable”, have very good manners, and be very agreeable; but he can have no English delicacy towards the feelings of other people – nothing really amiable about him.’ Frank, whose first name hints at French affiliations, is the fascinating newcomer to the traditional English village of Highbury – and he is not at all ‘frank’. ‘George’ vs ‘Frank’ is a resonant opposition, given that England was at war with France at the time of Emma’s writing. Churchill’s presence in the village is the cue for airing contemporary English prejudices about the artificial glamour of French manners, suspected frequently of concealing fundamental deceitfulness.That is the gist of Knightley’s reproach: English ‘amiable’ versus French aimable.

The appropriation of ‘English’ for Emma’s particular sweet view would have been contested. Was Donwell’s sweet view necessarily representative of the national landscape? Charlotte Brontë read Pride and Prejudice and responded to Austen’s world from her home on the Yorkshire moors. She found the book’s version of ‘English culture’ to be ‘a carefully-fenced, highly cultivated garden with neat borders and delicate flowers – but . . . no open country & no fresh air – no blue hill – no bonny beck. I should hardly like to live with her ladies and gentlemen in their elegant but confined houses.’ Brontë recoils from such a constricted version of what ‘English’ denoted. Rightly so; there are many different regional landscapes within England that have always had their own claims to iconic national representativeness, their own identity-forming histories, as Paul Readman’s Storied Ground (2018) has eloquently argued. Nonetheless, it was just that gardened appearance of England’s countryside that came to be seen by many later in the century as its national hallmark. ‘Foreigners are always struck with the garden-like aspect of England,’ remarked William Howitt in his compendious Rural Life of England (1838), anticipating Ralph Waldo Emerson’s description: ‘England is a garden . . . Under an ash-colored sky, the fields have been combed and rolled till they appear to have been finished with a pencil instead of a plough.’ Emma plays out many of the fomenting cultural prejudices of the late eighteenth century and Regency in constituting the components of the national character and relating them to the landscape. The so-called relational construction of identity helps to focus what is going on. The theory proposes that identity may be defined as much by emphasizing what the subject is not, as it is by emphasizing what he or she is: that is to say, it is constructed by selective exclusion of characteristics as much (if not more) as it is by accretion. In the tactics of Emma’s gentlemanly spokesman for Englishness, the characteristics disliked by the English could be conveniently pooled and projected on to the demonized French so as to constitute their national identity. Thus English manners are natural, and French artificial. This process was formative for establishing conventions for the English moral character, as historians have long pointed out. Gerald Newman’s densely documented cultural history The Rise of English Nationalism (1987) concentrates precisely on this period in arguing his case: ‘To be truly English was to live up to a stereotype generated in anti-Frenchness.’ This relational construct could be extended to aesthetic tastes, as Kay Dian Kriz has shown in her study of the rise of the English school of painters in the early nineteenth century. It also shaped movements in landscape gardening in the late eighteenth century, and the production of the English countryside idyll in Victorian representations.