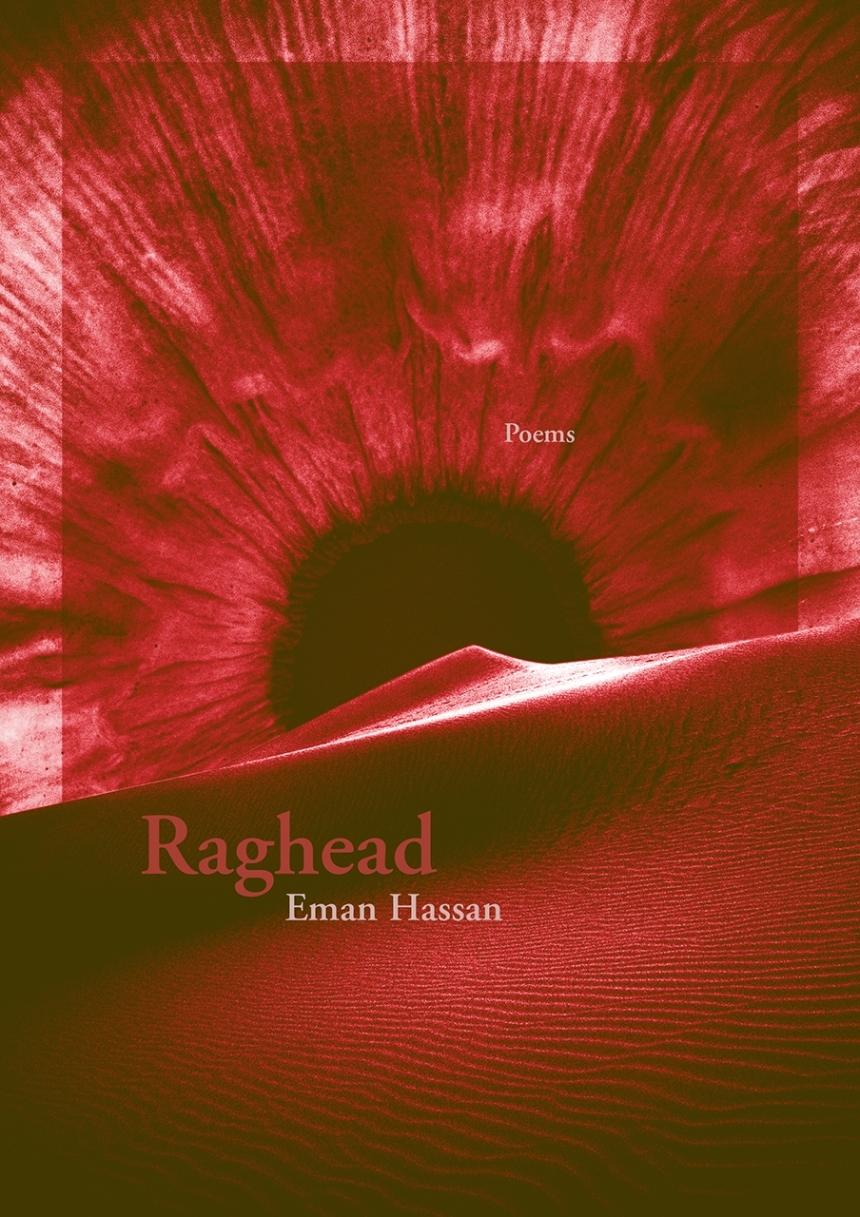 Deftly making use of historically specific events, Raghead examines the Gulf War, relaying untold narratives of occupation and warfare, as well as addressing the violence the war inflicted on the female body and on the land itself. In these poems, Eman Hassan explores the idea of trauma and memory through a maze of recollecting and forgetting, weighed against the importance of “being in in the now.”

Raghead examines what’s at stake in a world that places greater value on capitalist machinations of war and oil production than on human life and the environment. With these poems, Hassan urges the reader to transcend the boundaries of identity and values, to reconcile the beautiful and ugly paradox of human existence, and to take a collective responsibility for the present. The work is both feminist and humanist: women are not painted as victims, even though some poems show how their bodies are controlled or abused. Rather, the poems seek to empower the feminine and explore how women can be complicit in power games.

Raghead often hits sublime high notes to offset some of the more tonally violent accounts. It offers a glimpse into Gulf-Arab culture that is oftentimes obscured, attempting to show an inherent violence and beauty that has marked the region. The poems are told from the vantage of being bicultural, exploring the inherent tension that comes from being simultaneously Kuwaiti and American, and musing on what it means to be both and yet neither in a journey towards self-emancipation. These lyrical witness poems are sometimes angry, oftentimes spiritual, in an attempt to rekindle a sense of interconnectedness between all people.

“Then there is the lyricism of the desert night: neighbors boys’ with their blue tongues are hanging from silver lamp posts; girls are forced to serve while dressed in nothing but shackles, women indeed are being raped in an evil oceanic clamoring across an entire war-zone—and Eman Hassan is the gifted journalist to all this suffering; she asks like the moon, that seen too much in a single night, for clouds to cover the unscented, adverted experience with a healing of water that is pure like prayer. I could never exaggerate the importance of this necessary book. It is virtually haunting!”

“While the poems in Eman Hassan’s Raghead are clearly spoken, their elegant contours will surprise you as you are taken back and forth between the war-torn country of Kuwait and the speaker’s second home in the United States. You will witness the before and the after burning of a city, of time, and of many selves shifting and grasping for a sense that humanity still cares for itself. Identities are constructed and deconstructed, some but not all made new or whole again. Although your eye will take in experiences you wouldn’t have expected, you will more than likely hear these spaces as your own consciousness, and most likely for the first time, across time. You may even wonder if you are half-dreaming. There is a suffusion of the sacred in a number of these poems as well, a hope and a peace in the midst of adversity and crisis, a transference, if you will, between the letter of the poems and the spirit of the poems. This is a forthright collection written in the most ‘uncovered’ style possible, giving you the themes that connect time with the pressures of being—someone and no one in particular in a remembered Now.”

“Eman Hassan is a veteran of the first Iraq War. The daughter of a Kuwaiti father and an American mother, her multi-cultural background and experiences on the ground give her a unique perspective on the ongoing upheavals in the Middle East. In these finely-crafted poems she sings ‘between / the dipthongs of one language / and another’ simultaneously critiquing some aspects of Kuwaiti culture and correcting the stereotypes held by too many in the West. Raghead is a powerful, timely, and necessary book.”