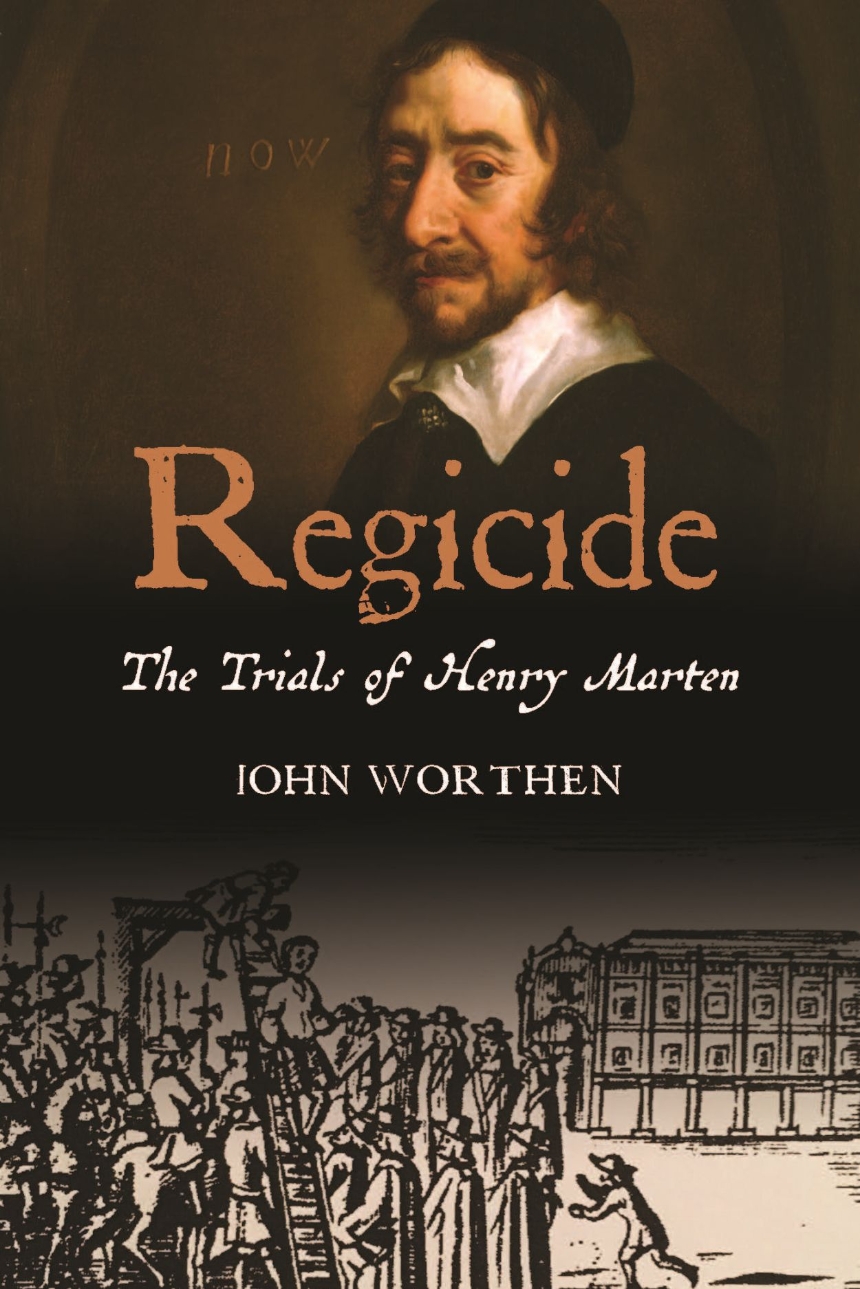 The Trials of Henry Marten

The Trials of Henry Marten

An illuminating biography of a republican convicted of regicide, drawing on the letters he wrote from within the Tower of London.

Henry Marten—soldier, member of parliament, organizer of the trial of Charles I, and signatory of the King’s death warrant—is today a neglected figure of the seventeenth century. Yet his life was both extraordinary and emblematic: he was at the fulcrum of English history during the turbulent years of the civil war, the protectorate, and the restoration. Imprisoned in the Tower of London and tried at the Old Bailey, Marten was found guilty of high treason, only to be held captive for years on the equivalent of death row. While he was in prison, his letters to his mistress Mary Ward were stolen and published in an attempt to destroy his reputation. Witty, clever, loving, sardonic, and never despairing, the letters offer a rare and extraordinary insight into the everyday life of a man in the Tower awaiting a sentence of death. The attempt to expose him as immoral revealed him instead as a tender and brave man. In John Worthen’s revelatory biography, Marten emerges from the shadows as a brilliantly clever, lively-minded man, free of the fundamentalist zeal so common in many of his republican contemporaries. Marten never abandoned his beliefs in equality, in a representative parliament under a constitution (which he had helped to write) without a monarch or a House of Lords, and in that way can be seen as a very modern man.

"This is a deeply researched and convincing portrait of the later years of one of the most remarkable radical politicians in British history. Moreover, it is written in a manner which makes it equally accessible and entertaining to those with expert knowledge of the period and those with none at all."

Ronald Hutton, author of The Making of Oliver Cromwell

"This racy account of how one regicide sidestepped his apparently certain execution, sheds fascinating light on the colour and chaos of the Restoration."

Hugh Aldersey-Williams author of Dutch Light: Christiaan Huygens and the Making of Science in Europe

Charles I, King of England, had been executed on 30 January 1649, following the first ever trial of an English king, staged in Westminster Hall in the old Palace of Westminster. Whether it had been a killing or a murder was disputed at the time and has been ever since. The trial had, for sure, not been conducted in the usual way of English trials with a judge and jury, but with a president (the lawyer and MP John Bradshaw, wearing a metal-lined hat in case anyone took a gun, sword, or pike to him) and over sixty so-called commissioners. The majority were MPs, many of them until recently in the army, but with a hard core of army officers also attending regularly, ‘giving some justification to the charge that proceedings were by court martial’. The most famous representation of this High Court of Justice, banked up high around their president, was, however, first published thirty-five years later, its layout designed to fit the page of the book in which it first appeared. It effectively halved the actual width of Westminster Hall, turning a landscape picture into a portrait appropriate for a book. Quite another version of how Westminster Hall looked during the trial is presented in a drawing which not only takes account of (although slightly exaggerates) the astonishing width of the hall (sixty-seven feet) and the sheer tumultuous presence of so many people but allows for the commissioners to be seated in three rows along the flight of three steps that leads up to the great window at the end of the hall. Although the artist had problems with perspective and galleries, the result offers an image far more vivid and probably more accurate.

The artist confirms the military setting of the whole: two hundred guards were on duty, and the picture shows soldiers everywhere, including those with flags at the front.
Henry Marten, who is going to be centre stage throughout this book, was without question one of ‘the men of the present age’. Illustrations 1 and 2 show him at the height of his political responsibility as one of the commissioners at the king’s trial, sitting directly under the shield at the back; the man beside him, according to the 1684 engraver (who added the letters ‘K’ and ‘L’), is Cromwell. Marten, as an MP in 1643, had not only been censured by the House of Commons (led by the pivotal Puritan John Pym) for anti-monarchist sentiments but had been committed by them to the Tower of London and expelled from the Commons for three years. In January 1649 he was nevertheless able to come up with the crucial form of words for which the group of men organising the king’s prosecution had been asking:
… by what Authority and Commission do we try him? To which none answered presently. Then after a little space Henry Marten … rose up, and said, in the name of the Commons and Parliament assembled, and all the good People of England, which none contradicted … (EIA 248)

It must have been around 1649–50, at the height of Marten’s political responsibility, that – along with other important people on the ruling council – his portrait was painted by ex-court artist Sir Peter Lely. His nose appears very large, his chin marked, his air gently supercilious. The antiquary John Aubrey – who writes as if he had met Marten – would note, ‘his habit moderate: his face not good’, while Charles I is supposed to have called him ‘that ugly Rascall’. The black cap he wears, though, is stylish, as is a glinting brooch-like jewel at his neck. His hair is long, his moustache turned up, his eyebrows apparently permanently raised, his eyes penetrating and large: his whole face on the verge of a smile but not indulging it.

Especially striking is a comparison with the portrait of Cromwell that Lely painted at around the same time: the picture of a tough politician and soldier, clean-shaven, face ruddy and outdoors, the wart (just the one) very clear, but the whole conception dominated by the reflection of his armoured shoulder-piece and breast-plate. That is what shines and glints in his portrait, not a jewel; Cromwell (with Lely’s help) presents himself entirely as a down-to-earth soldier. Marten, however, repudiates his roles as colonel and politician to be an almost monkish, elegant, indoors eminence – still ironical about everything.

And indeed, the republican enterprise, along with Marten’s public career, ran into the sand over the next few years; by the end of 1653 Cromwell had accepted the role of Lord Protector, working with a written constitution and in theory supported by ‘the people assembled in Parliament’ but, in fact, kept in position by a standing army. He ended up as king in all but name, using his own ‘high hand of Arbitrary power’ to control parliament, army, and country. When he died rather suddenly in 1658 there followed an eighteen-month crisis which led to the Restoration. Cromwell’s son Richard – after setting in train quarrels between parliament and army in which he was helpless to exert power – quickly abandoned the enterprise he had been gifted, and sections of the army, supported by members of the House of Commons, resolved upon a restoration of the monarchy by acquiring the appropriate royal personage. This was Charles I’s son, who was in Holland watching events intently. One army general, George Monck, took more responsibility on himself than any other, and those who supported him found themselves happily in the ascendant when Monck brought Charles back. Those who still believed in the Commonwealth were desperate over the failure of the revolutionary republican enterprise, which they called the ‘Good Old Cause’ or ‘the Common Cause’ or simply ‘the Cause’. But they were left to cope as best they could.

Before leaving Holland Charles had issued a declaration indemnifying those who had governed without him and had fought against his father. There was initially a single set of exceptions to those pardoned: the men who had been directly responsible for his father’s execution. These men – the term ‘regicides’ was quickly applied to them, and it has stuck – were criminalised for committing high treason. The group included all those who had sat in the High Court of Justice and had signed the warrant for Charles’s execution as well as those who had taken him on to the scaffold and various others deemed directly responsible for his death.