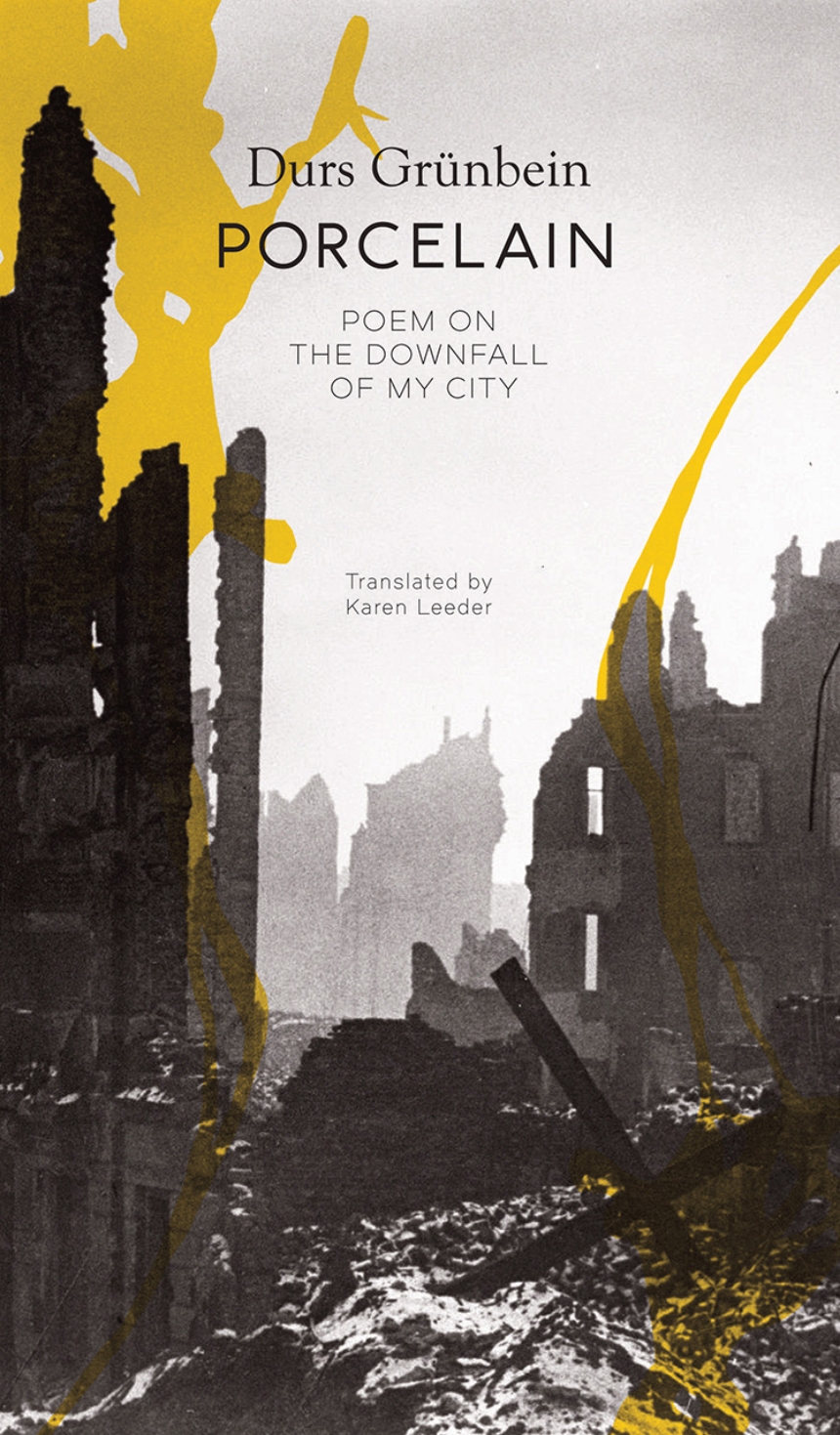 Poem on the Downfall of My City

Poem on the Downfall of My City

Translated by Karen Leeder
Porcelain is a book-length cycle of forty-nine poems written over the course of more than a decade that together serve as a lament for Durs Grünbein’s hometown, Dresden, which was destroyed in the Allied firebombing of February 1945. The book is at once a history and “declaration of love” to the famed “Venice on the Elbe,” so catastrophically razed by British bombs; a musical fusion of eyewitness accounts, family memories, and stories, of monuments and relics; the story of the city’s destiny as seen through a prism of biographical enigmas, its intimate relation to the “white gold” porcelain that made its fortune and reflections on the power and limits of poetry. Musical, fractured, ironic, and elegiac, Porcelain is controversial, too, in setting itself against what Grünbein calls the “myth” of the Germans as innocent victims of a war crime. At the same time, it never loses sight of the horror deliberately visited on an unwitting civilian population, nor the devastation that looms so large in the German memory. Published for the first time in English, on the seventy-fifth year anniversary of the firebombing, this edition contains new images, notes, Grünbein’s own reflections and an additional canto—an extraordinary act of poetic kintsugi for the fractured remains of Dresden’s memory.

"Grünbein’s polyphonic collection Porcelain addresses Dresden’s thorny history through the leitmotif of porcelain, the “white gold” of Meissen whose discovery catapulted Saxony and its capital to considerable prestige in the 18th century — although much of it suffered considerable damage in the Allied bombing. The 50 poems that make up the cycle probe deeply the history of Dresden, adopting then discarding allusive threads to explore the ruin of the city. . . . Here, porcelain represents the fragility of past glory; it also offers Grünbein a model for the presence of the past, and for his collection itself. In light of this multivalent symbol, the poems can be read as shards of language, splinters of speech; each evokes a whole that it will never reconstruct."

"The forty-nine (plus one) poems that comprise Porcelain explore the complex layers of loss, meaning and memory and together form a rich meditation on war, destruction and the question of who owns suffering. It is not a dirge but a human reckoning. The presentation of this anniversary edition is both handsome and sombre, while Karen Leeder’s translation gives the poetry an immediate, grounded feel and the detailed glossary and notes provide context, as required, to enhance the reading experience."