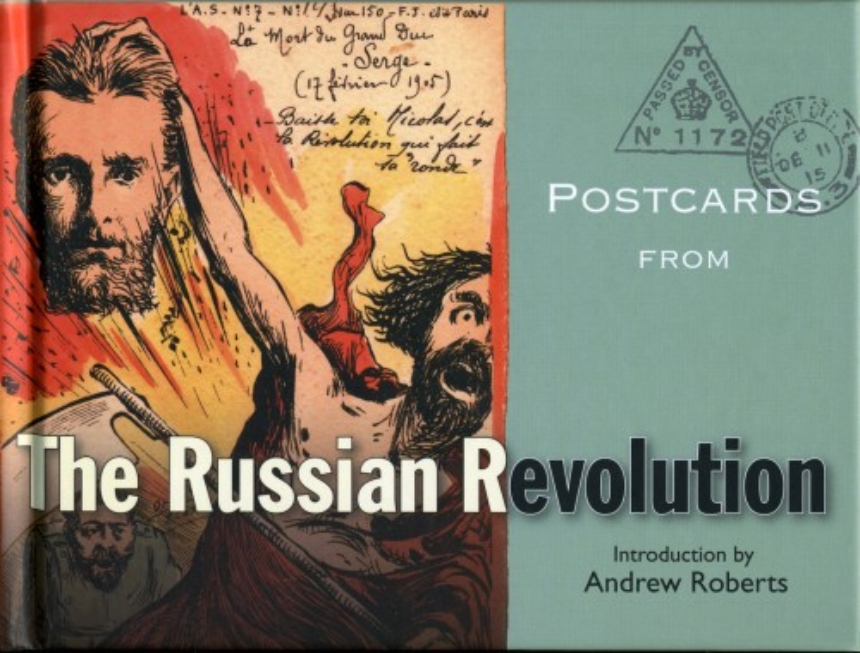 Postcards from the Russian Revolution

Postcards from the Russian Revolution

The tumultuous political events that swept Russia in the early twentieth century sent powerful ripples around the world. The Bolshevik revolutionaries and activists had sympathizers among Americans and Europeans alike, and one notable way they exercised their support was through artfully created postcards. This remarkable volumepresents for the first time a newly unearthed collection of those cards that recount the 1917 Russian Revolution in a novel way.
The postcards originated not only from Russia, but also from Germany, the United States, Belgium, and France, and they reflect their diverse origins in the rich array of artistic styles employed to create them. Whether simply drawn, hand-painted, or mass-printed, the cards present compelling and complex images of the Bolshevik Revolution of 1917 and the people who were enmeshed in it. The cards serve as concise yet powerful artistic documents of Russian history and culture, as they display bloody and graphic street scenes, rare pictures of lesser-known revolutionary leaders, satirical sketches of Russian rulers, portraits of the royal family, illustrations of palaces and institutional buildings, and depictions of pivotal events leading up to the Revolution such as the 1905 assassination of Grand Duke Alexander. Also included in this fascinating visual narrative are cards depicting crucial events from the aftermath of the Revolution, including the great famine of 1921 and public celebrations of the newly formed Union of Soviet Socialist Republics.
An unprecedented and arresting exploration of the Russian Empire in its death throes, Postcards from the Russian Revolution reveals a wholly new and vibrant perspective on one of the most important political movements of the twentieth century.

For both Trenches and Russian Revolution:
"With introductions by historian Andrew Roberts, these attractive books will interest the casual reader and bear close inspection by the specialist. Viewed from the angle of their postcards, the Russina Revolution and World War I become accessible and multifaceted on a human level, allowing readers a glimpse into aspects of those turbulent times that most will not have seen before."