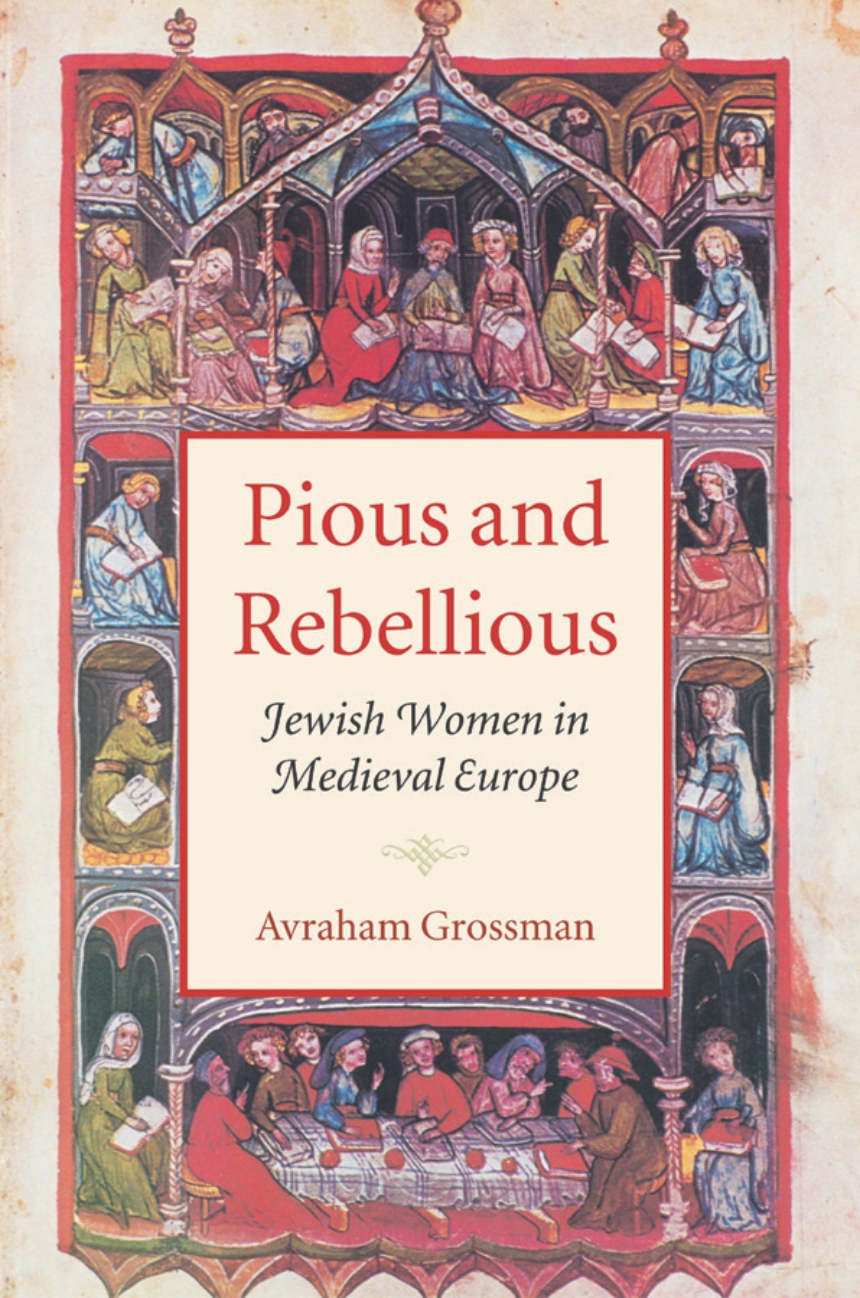 This volume, an amazing act of historical recovery and reconstruction, offers a comprehensive examination of Jewish women in Europe during the High Middle Ages (1000–1300). Avraham Grossman covers multiple aspects of women’s lives in medieval Jewish society, including the image of woman, the structure of the family unit, age at marriage, position in family and society, her place in economic and religious life, her education, her role in family ceremonies, violence against women, and the position of the divorcée and the widow in society. Grossman shows that the High Middle Ages saw a distinct improvement in the status of Jewish women in Europe relative to their status during the Talmudic period and in Muslim countries. If, during the twelfth century, rabbis applauded women as "pious and pure" because of their major role in the martyrdom of the Crusades of 1096, then by the end of the thirteenth century, rabbis complained that women were becoming bold and rebellious. Two main factors fostered this change: first, the transformation of Jewish society from agrarian to "bourgeois," with women performing an increasingly important function in the family economy; and second, the openness toward women in Christian Europe, where women were not subjected to strict limitations based upon conceptions of modesty, as was the case in Muslim countries. The heart of Grossman’s book concerns the improvement of Jewish women’s lot, and the efforts of secular and religious authorities to impede their new-found status. Bringing together a variety of sources including halakhic literature, biblical and talmudic exegesis, ethical literature and philosophy, love songs, folklore and popular literature, gravestones, and drawings, Grossman’s book reconstructs the hitherto unrecorded lives of Jewish women during the Middle Ages.

INTRODUCTION • The Historical Background • Sources • The Chronological and Geographical Framework • THE IMAGE OF THE WOMAN: PARTNER OR THE "OTHER"? • The Creation and the Superiority of Man • The Temptation in the Garden of Eden and the Superiority of Man • Characteristics of Woman and the Superiority of Man • Women and Sorcery • The "Medical Inferiority" of Women and the Superiority of Men • The Obligation to Perform Mitzvot and the Superiority of Man • Expressions in Praise of Women and their Perception as "Partner" • Between Image and Reality • AGE AT MARRIAGE • The Talmudic Heritage • The Sitation in Babylonia in the Eighth and Ninth Centuries • The Situation in Non-Jewish Society • The Situation in Jewish Society during the Tenth through Thirteenth Centuries • Factors Causing the Large Number of Childhood Marriages • Results of Early Marriage • ENGAGEMENT, BETROTHAL, AND THE CHOICE OF A MARRIAGE PARTNER • The Ceremonies and their Development • The Ban in Ashkenaz against Cancelling Engagements • Choice of Marriage Partner • Consensual MArriage in Christian Europe • The Institution of Matchmaking and Its Place in Jewish Society • MONOGAMY AND POLYGAMY • The Biblical and Talmudic Heritage • The Situation in Ashkenaz • Polygamy in Spain • The Atmosphere in the Polygamous Family • Levirate Marriage and Bigamy • FEMININE MODESTY AND WOMEN’S ROLE IN SUPPORTING THE FAMILY • The Talmudic Tradition • Modesty in Muslim Society • Modesty in Jewish Society in Muslim Countries • The "Miqveh Rebellion" in Egypt • The Sitation in Jewish Society in Spain • Feminine Modesty and Women’s Work in Christian Europe • The Situation in AShkenazic Jewish Society • Changes in the LEgal Status of Women • WOMAN AS WIFE AND MOTHER AND HER ECONOMIC STATUS • The Woman within Her Home • Prostitution and Concubinage • The Woman’s Economic Status • WOMEN’S CULTURE AND EDUCATION • The Talmudic Heritage • The Situation in Muslim Society • The Situation in Christian Society • The Stance of the Jewish Sages in the Middle Ages • Learned Women • Education of Women in Jewish Society • Girls’ Education and Erudition in Ashkenaz • The Situation in Spain • Education of Jewish Women in Italy and Sicily • THE ROLE OF WOMEN IN RELIGIOUS LIFE AND IN FAMILY CEREMONIES • The Biblical and Talmudic Heritage • The Role of Women in Relgious Life in Christian Europe • The PErformance of Time-Linked Positive Commandments • Women in the Synagogue • Women in the Celebration of Passover • Women Circumcisers • Women as Ritual Slaughterers • Fast Days and Acts of Charity by Women • REfraining from Eating Meat During the Season of Mourning • Women as Bearers of Halakhic Traditions • The Role of Women in Family Ceremonies • WOMEN’S ROLE IN JEWISH MARTYRDOM IN EUROPE IN THE ELEVENTH TO THIRTEENTH CENTURIES • The DEscriptions of Women in Chronicles about the Pogroms • The Historical Reliability of the Descriptions in the Chronicles • The Role of Women in Jewish Martyrdom According to Christian Sources • The "Beauty" and "Purity" of the Women • Kiddush Hashem and the Cultural and Social Status of the Women • The Descrip=tion in the Chronicles and the Public Image • Between the Chronicles of 1096 and Sfer Zekhirah • VIOLENCE TOWARD WOMEN • The Tamuldic Tradition • The Situation in Christian and Muslim Society • The Position of the Babylonian Geonim • The Position of the Spanish Sages • Maimonides’ Position • The Situation in France and Italy • The Situation in Germany • Wife Beating for "Education" • Summary: Between Theory and Reality • THE DIVORCÉE AND THE "REBELLIOUS WIFE" • The Biblical and Talmudic Heritage • The Attitude of Medieval Jewish Sages to Divorce • Grounds for Divorce • The Change at the Beginning of the Geonic Period • The Retreat from the Taqqanah of Moredet during the Twelfth Century • The Proliferation of Divorce in Ashkenaz in the Thirteenth Century and Thereafter • "Rebellion" of Women in Christian Society • Divorce in Spain • The Attitude of the Divorcée • THE WIDOW AND THE "MURDEROUS WIFE" • The Large Number of Widows • The Biblical and Talmudic Heritage • The Situation in Non-Jewish Society • Life Expectancy in Europe • The Situation in Jewish Society: The Attitude to the Widow’s Remarriage • The Commonness of Widowhood and its Social Significance • The Widow’s Economic Rights • The "Murderous Wife" (Qatlanit) • SUMMARY: WOMAN’S STATUS IN HISTORICAL PERSPECTIVE • The Positive Changes • Negative Changes • The Silencing of Creativity • Between "Pious" and "Rebellious" Women • NOTES • GLOSSARY • BIBLIOGRAPHY • INDEX