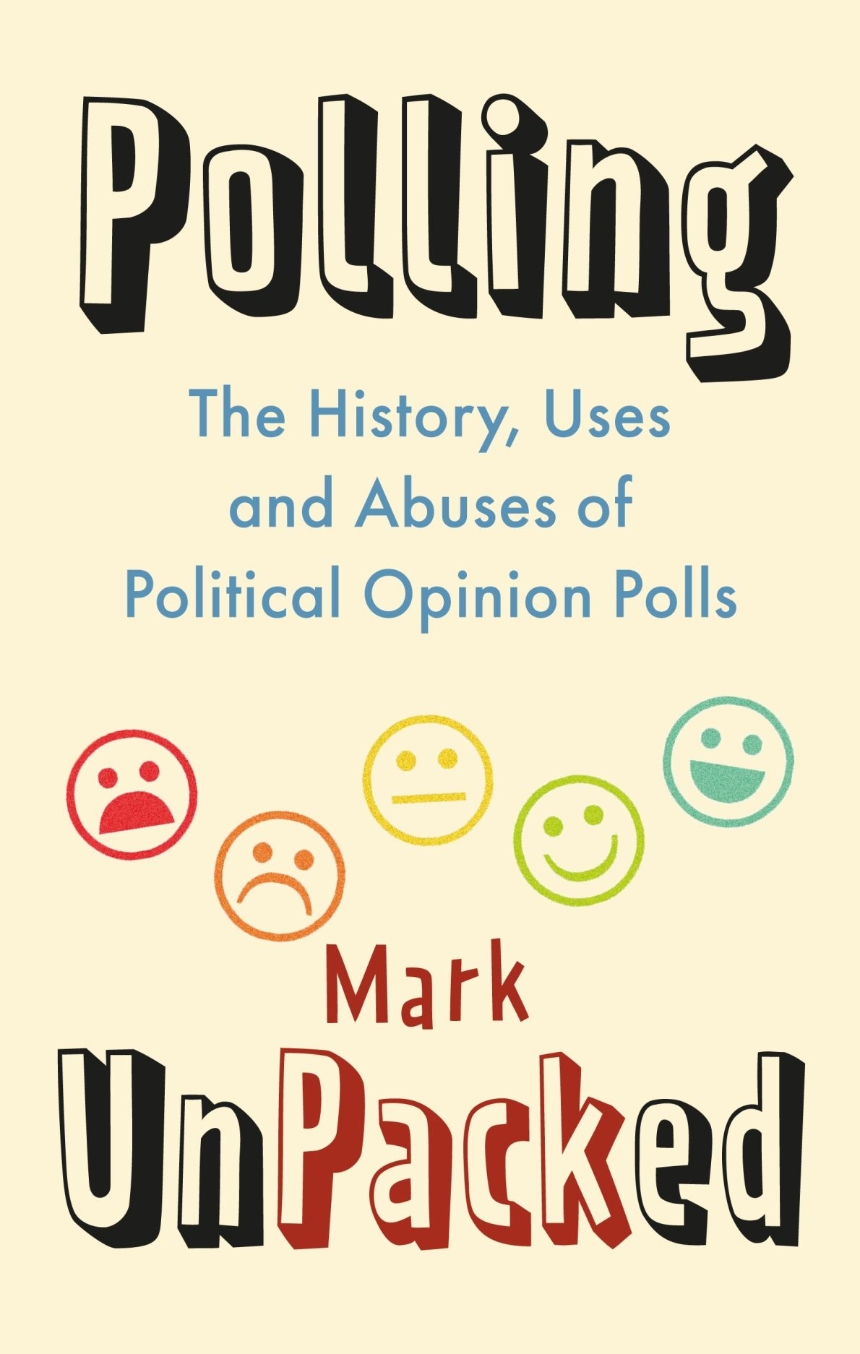 The History, Uses and Abuses of Political Opinion Polls

The History, Uses and Abuses of Political Opinion Polls

From a political-polling expert, an eye-opening—and hilarious—look at the origins of polls and how they have been used and abused ever since.

Opinion polls dominate media coverage of politics, especially elections. But how do the polls work? How do we tell the good from the bad? And in light of recent polling disasters, can we trust them at all?

Polling UnPacked gives us the full story, from the first rudimentary polls in the nineteenth century, through attempts by politicians to ban polling in the twentieth century, to the very latest techniques and controversies from the last few years. Equal parts enlightening and hilarious, the book requires no prior knowledge of polling or statistics to understand. But even hardened pollsters will find much to enjoy, from how polling has been used to help plan military invasions to why an exhausted interviewer was accidentally instrumental in inventing exit polls.

Written by a former political pollster and the creator of Britain’s foremost polling-intention database, Polling UnPacked reveals which opinion polls to trust, which to ignore, and which, frankly, to laugh at. It will change the way we see political coverage forever.

“When it comes to polling, size doesn’t matter—it’s how you use it. . . . We learn about this golden rule and many more in Polling UnPacked, a comprehensive yet surprisingly fun overview of modern opinion polling. . . . Pack’s book is essential reading for anyone seeking to understand modern politics. . . . It is a timely manual for those wanting to spot good polls from bad ones.”

Most Anticipated Books of Spring 2022

"I am so glad I read this valuable book. It wears its learning so lightly, but I found out so much I didn’t know and needed to know."

"A must-have book for all who follow the polls that is both informative and a really good read. Pack has done a great job."

“While the individual man is an insoluble puzzle, in the aggregate he becomes a mathematical certainty. You can, for example, never foretell what any one man will do, but you can say with precision what an average number will be up to.”—Sherlock Holmes

There is one lie many politicians cheerfully admit to. They tell the world they do not pay attention to polls, yet in private they pore over the details of polls, commission their own and fret about everyone else’s.

Despite this coyness from politicians, paying attention to the polls is desirable. Just as it is natural for a meteorologist to look at today’s weather, for the manager of a sporting team to look at the current state of the league table or for an author to consult the book sales charts (perhaps), it should be natural for a politician to look at the polls. Polls—if done well—tell you what is going on. They inform you what those outside your bubble think. They tell someone who is there to serve the public what the public says it wants. If, that is, you can tell the good poll from the bad, and separate the useful insight from the dodgy extrapolation.

That is where this book comes in. As well as explaining how polls work and showing how they can be done right, it also looks at when polls go wrong. Do they go wrong so badly and so often that it is best to ignore them? (Spoiler: no, they don't.)

Before we delve into such questions, a little definition is in order. The book explains opinion polls: the systematic posing of a series of questions to a group of people with the answers adjusted to make them representative of a wider group. That wider group might be Tennessee, New South Wales or the United Kingdom. The point is to use the small group of people quiz to measure that larger populations views.

More specifically, this book explains political opinion polling. That is, polls whose questions are primarily political: voting intentions, attitudes towards measures in the government's latest budget, approval ratings of politicians and so on. Much of the methodology of political and non political polling is the same, so much of this book will also help you to understand polling in general. But there are specific twists to political polling which this book covers.

The word ‘pollster’ itself was first used by Time magazine in 1939. In one of those beautiful coincidences which light up life, the term which was conjured up for a story about how the most famous pollster of the day, George Gallup, was polled at home by the first ever campaign pollster Emil Hurja. Like the word, Gallup’s fame lived on while Hurja descended into obscurity. This book tells the story of Gallup and Hurja, their predecessors, their successors and how to make sense of their work.

“A political leader in a general election, apart from being chronically overworked and unable to study even the daily press very carefully, is like a warrior or a pilot operating and almost total fog... [and so] market research has a valuable role to play.”—Harold Wilson, prime minister

The US presidential election of 1824 was odd. Only one party contested it. Yet a contest it was, with four different candidates from that one party competing for the public’s votes. Those votes, however, did not decide the election. Instead, with no candidate winning a majority in the Electoral College, the decision went to the House of Representatives. The winner to emerge from there—John Quincy Adams—had led in neither the electoral college vote nor the popular vote.

Adam's victory was a watershed in the development of the US party system. The Democratic-Republican Party (not to be confused with either the later Democratic Part or the later Republican Party) had been dominant, and at the previous election in 1820, its candidate, James Monroe, did not even face a significant opponent.

That transfer and concentration of power in the hands of a small caucus was by 1824 widely mocked as “King Caucus,” in reference to the sort of monarchical power that the founders of the USA had deliberately tried to avoid. As a result, in 1824 only a quarter of the congressional delegation chose to take part in selecting the party's official candidate for president. Moreover, three others from the party ran for president.

This shift of power away from elite decision-makers was enhanced by individual states increasingly moving to let the public vote in presidential elections. Previously, individual state legislatures had picked their states national Electoral College members, and the Electoral College then voted between candidates for president. But increasingly, states allowed public votes to determine the make-up of their Electoral College members. In 1800 only five out of 16 states had such voting. By 1824 this had risen to 18 out of 24, and in 1836 South Carolina was the only holdout.

These three factors—a proper, albeit confusing, contest with a real doubt over the outcome; the fracturing of the power of the Democratic-Republican Party's congressional delegation; and the increasing use of the popular vote to decide the outcome in individual states—meant that there was more interest than usual in what the public (or, at least, the subset of men allowed to vote) thought about the candidates.

As a result, the contest also saw the precursors to modern political opinion polls. These were straw polls, simple tallies at various events, such as Fourth of July celebrations, of how many people supported each candidate. In some cases, books were left out in a public place for several days, with people writing in their voting choice. The primary locations for straw polling, however, were local militia meetings. Militia musters were ideal occasions for such votes since the enrolled militia covered all white males aged 18 to 45 and the annual musters were popular events that attracted large crowds. Asking about elections at them fitted with the militias’ democratic and political traditions. Most state militias elected their lower offices and some even elected higher ones. They were a natural and relatively straightforward way of testing public opinion. In a foreshadowing of later polling controversies, however, there were arguments over how typical those attending militia meetings were of the broader public, given that one candidate, Andrew Jackson, was a hero of the militia.

There were none of the techniques described elsewhere in this book to ensure a representative sample. Although some reporting tallied up scores from different events to help give a picture of which candidate could claim to be the “public’s” choice, these were much cruder affairs than modern polling.

The exact details of these straw polls are often misreported, sometimes described as organized by newspapers and sometimes giving the credit to newspapers that were actually just reporting what other papers had already covered. But it appears that three newspapers—the RaleighStar and North Carolina State Gazette, the Wilmington American Watchmen and Delaware Advertiser and the Star and North Carolina Gazette—deserve the credit for most pioneering reporting of the straw polls.

In another foreshadowing of later disputes about political polling, there was a pattern of different newspapers liking or not liking straw polls depending on how the results did or did not line up with their own editorial line. The Raleigh Register, for example, was a supporter of candidate William H. Crawford and attacked the act of “prematurely collecting the opinion of people.” Those collections of opinions were showing Crawford lagging. Political polling, in its earliest form, was up and running.