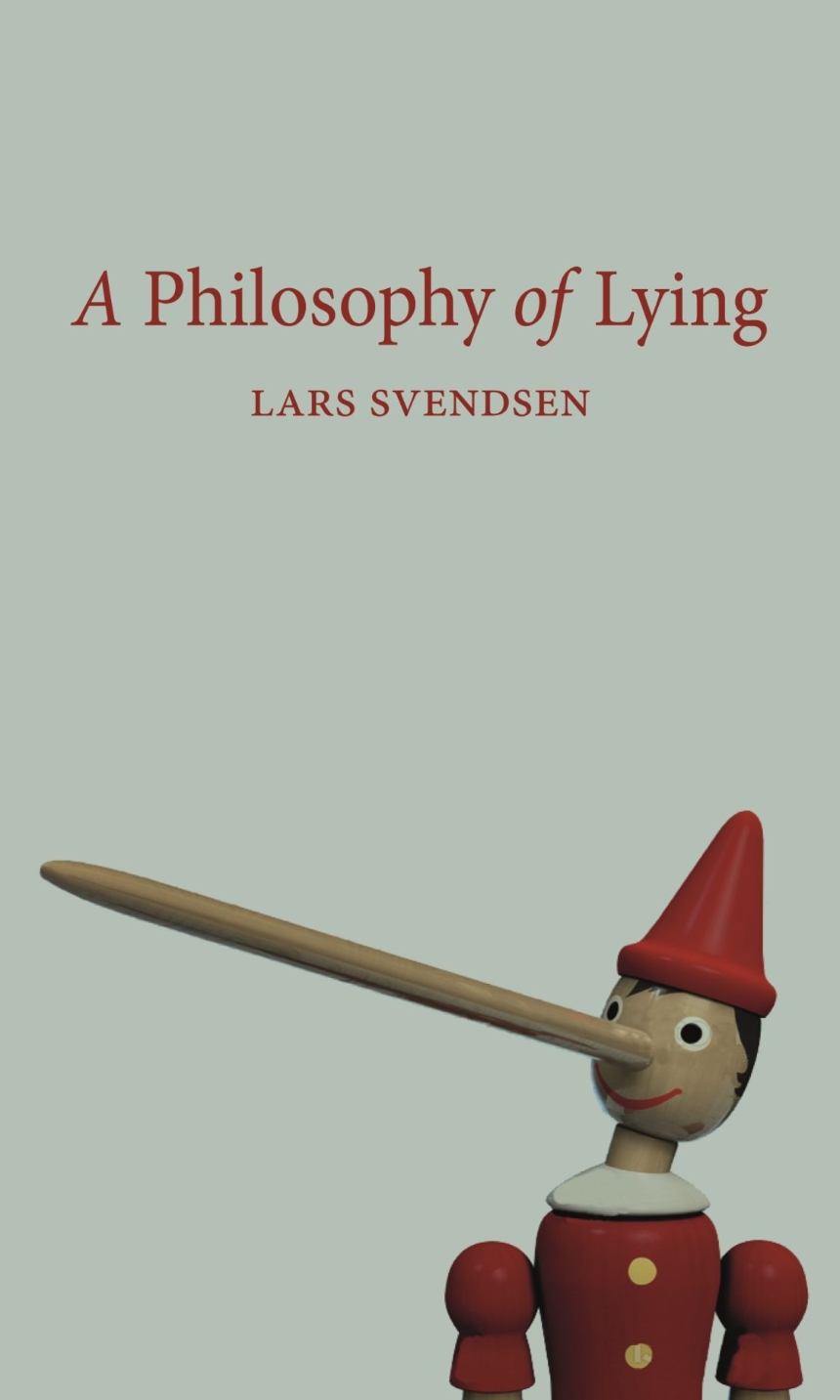 A Philosophy of Lying

A Philosophy of Lying

Translated by Matt Bagguley
From lying to friends to lies in politics, a wide-ranging examination of the forms and ethics of falsehood.

From popular philosopher Lars Svendsen, this book is a comprehensive investigation of lying in everyday life. What exactly is a lie, Svendsen asks, and how does lying differ from related phenomena, such as “bullshit” or being truthful? Svendsen also investigates the ethics of lying—why is lying almost always morally wrong, and why is lying to one’s friends especially bad? The book concludes by looking at lying in politics, from Plato’s theory of the “noble lie” to the Big Lie of Donald Trump.

As phrases like “fake news” and “alternative facts” permeate our feeds, Svendsen’s conclusion is perhaps a surprising one: that, even though we all occasionally lie, we are for the most part trustworthy. Trusting others makes one vulnerable, and we will all be duped from time to time. But all things considered, Svendsen contends, truthfulness and vulnerability are preferable to living in a constant state of distrust.

"'It is better to be fooled occasionally than to go through life with . . . chronic distrust,' writes philosopher Svendsen in this clever take on lying and telling the truth. . . . And though people can be dishonest, Svendsen remains hopeful that serial lying is an anomaly. His reflections are nuanced, his conclusions smart, and he keeps things free of academic jargon. Philosophy-minded readers will find this an enjoyable and enlightening study."

"What are we to do if we confront lying honestly? . . . Svendsen gives us ready access to the thought of the best and brightest in the philosophical tradition, and he does so with wit, charm, and clarity. But he gives us more than that. He offers considerate advice on questions of utmost importance to living well in a world where lying is a fact."

Not that you lied to me, but that I no longer believe you, has shaken me.—Friedrich Nietzsche, Beyond Good and Evil

I can’t remember when I told my first lie, nor what I was lying about. It was probably when I was three or four years old, because that’s when we humans start doing that sort of thing, and it was probably to avoid being blamed for doing something wrong. I have never been a very good liar. My father, on the other hand, was a formidable liar. They weren’t malicious lies, just pranks, and my brother and I fell for them almost every damn time. My mother, on the other hand, saw through him most of the time. I almost never managed to fool anyone with a lie. One of the downsides of being the youngest in a family is that everyone else has a psychological advantage over you. That could explain why I never became a skilled liar– I was so rarely successful that I lacked the inspiration to continue. Nevertheless, I didn’t quit completely. Since becoming aware of the possibility of lying, I have lied to everyone I’ve had a relationship with. I have lied to my parents, brother, wife, girlfriends, children, friends and colleagues. After this admission, however, I feel the sudden need to sugarcoat the pill by saying that on the whole I have been honest with them all. Honesty is not necessarily just an expression of a good character, but is also due to the fact that life is easier when you are honest. A liar has to remember twice as much as someone who is telling the truth – both how something really is and how he has said it is. I prefer an uncomplicated life. In this sense, honesty is as much to do with my own convenience as it is about morality. Considering merely one’s own convenience, however, is a poor foundation on which to build one’s moral life.

Of all the lies I have told, I like to think that most of them have been ‘white’, in that I have tried to protect someone directly by being untruthful towards them, or indirectly by telling beneficial lies to someone else about them. However, I’ve also told quite a few of the ‘grey’ or even ‘black’ variety, where the only consideration I had was for myself – where telling the truth would have created more discomfort or problems for me than telling a lie. Hopefully I have mostly avoided the really coal-black lies, where you knowingly and intentionally hurt someone else by telling a lie. My white lies have probably been in the majority. Does that mean that what I have done is okay? Is it morally acceptable to tell white lies? Of course, it is also conceivable that I suffer from such an acute level of self-deception that I am hiding the extent of my dishonesty from myself. But I don’t believe that either.

Most people are truthful in general. The majority tell far fewer lies than the average person because there is a minority among us who raise this average steeply. In the grand scheme of things, lies make up a very small part of everything we say to each other. However, this doesn’t mean that lying is not a phenomenon of great importance. One lie, if serious enough, can ruin a marriage, a friendship, a career or a life.

Today’s philosophical discussions about lying revolve chiefly around the question of what lies are, about what makes a lie a lie, and what distinguishes it from other, related phenomena. These discussions are predominantly found in the philosophy of language. I will address these questions, but there are more ethical issues at the heart of my research. There is comprehensive research on lying in social psychology, but I will only be considering this to a small extent. Nevertheless, some findings in this research can be mentioned briefly here. People lie less to each other when they are face to face and more when, for example, they send text messages. Extroverts lie more than introverts, even when we allow for the fact that extroverts interact more socially. Men and women lie more or less equally, but women lie more often to avoid hurting other people’s feelings, while men do it more to highlight their own brilliance. Last but not least, we lie less often to those we have a close relationship with, and we also find lying to them more disturbing.

The first chapter is devoted to a conceptual clarification of what we mean by ‘lying’. To achieve this, we will take a closer look at the concepts of truth and truthfulness, and we will also delimit lying from its close relatives, truthiness and bullshit. Lying is understood as choosing to say something you believe to be untrue in a context where the person you are talking to has reason to assume that you are telling the truth. It is important for our further discussion that the most basic terms are given a fairly precise meaning. The next chapter deals with the different views on lying within philosophical ethics, and can be said, roughly, to conclude that lying is nearly always wrong– and this applies to so-called ‘white lies’ too – but it also concludes that there are special cases where lying can be defended. After that we turn to certain type of lies, namely the ones we tell ourselves. We humans are notorious self-deceivers, yet we seem to have an obligation to be honest with ourselves. Also, if you are the ‘victim’ of a comprehensive self-deception, if you are unable to be truthful to yourself, then it’s unlikely you will manage to be truthful to others. If you cannot trust yourself, no one else can trust you.

Lying is generally wrong, but lying to your friends is especially wrong because you have built a special trusting relationship with them, and that is the topic of the following chapter. Friends have a stronger obligation to be truthful with each other than they do with ‘acquaintances’ or strangers. It also means you have an obligation to tell your friends uncomfortable truths about themselves. Most reflections on friendship and lying are also valid for relationships with a partner or spouse. If anything, the points in this case are especially applicable since we are most likely talking about an even stronger connection, where a breach of trust in the form of a lie can be experienced as a particularly serious betrayal.

From there, we take a leap from lying in our closest relationships to lying at a societal level, and look at lying’s place in the political world. After a review of the most important philosophical contributions on the role that lying can or should play in politics, where thinkers such as Plato, Machiavelli, Hobbes, Weber and Arendt are discussed, we turn to real politics and discuss why politicians – with an emphasis on heads of state – lie and whether they have a morally acceptable reason to do so. At the end of the chapter, we discuss the political figure thought by many to completely overshadow all other liars: Donald Trump.

In the concluding chapter, I discuss how we should relate to lies: not just our own lies – where the obvious answer is that we should try to avoid it – but also to the fact that other people lie. Most of us are not very good at exposing liars. ‘Signs’ of honesty and dishonesty are of little use. The most you can learn from studying these signs is how to become a better liar, not how to become a better lie detector. However, you are wise to mostly assume that people are telling the truth for the simple reason that in general they do. You will be fooled every now and then, but it is better to be fooled occasionally than to go through life with a chronic distrust of other people.