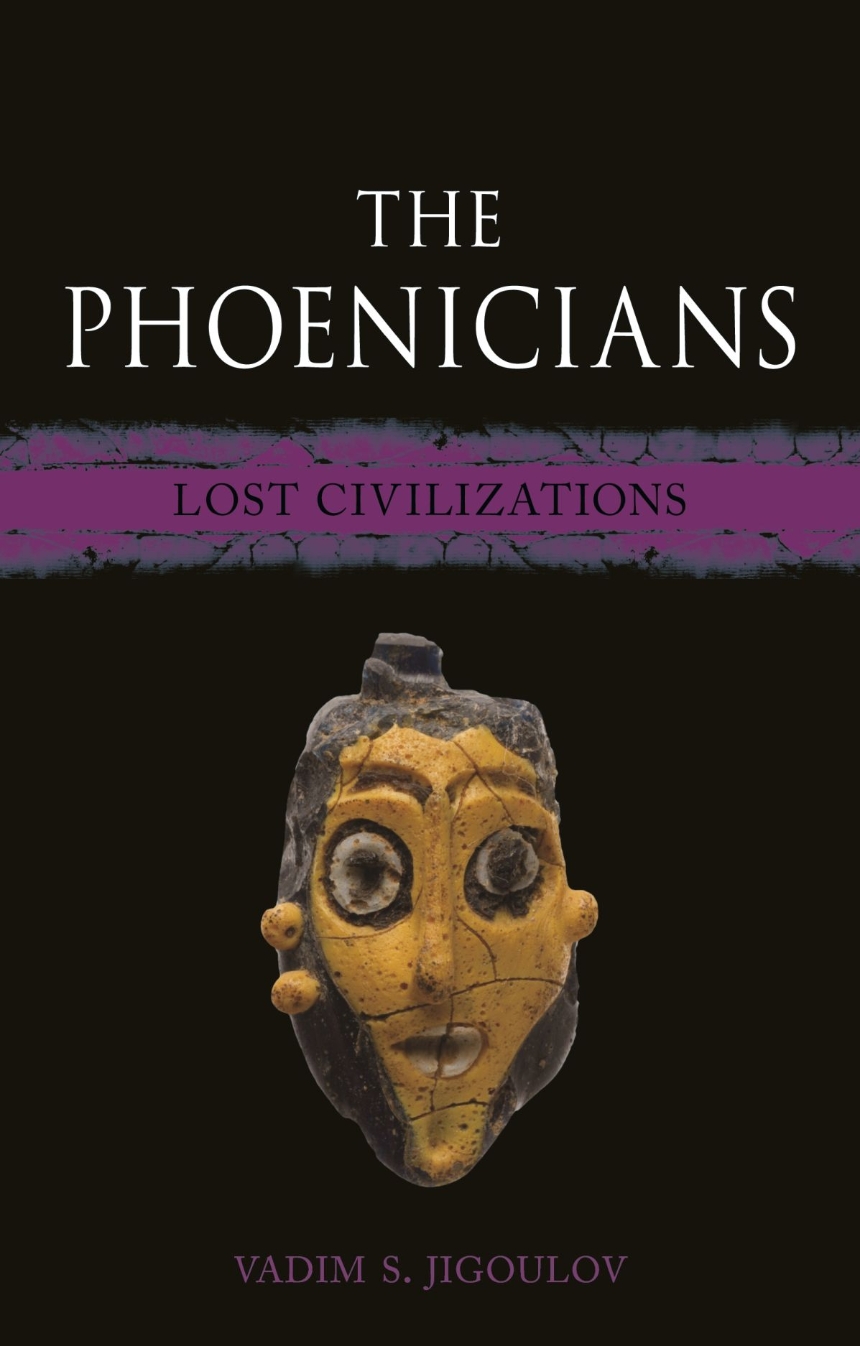 Drawing on an impressive range of archaeological and textual sources and a nuanced understanding of biases, this book offers a valuable reappraisal of the enigmatic Phoenicians.

The Phoenicians is a fascinating exploration of this much-mythologized people: their history, artistic heritage, and the scope of their maritime and colonizing activities in the Mediterranean. Two aspects of the book stand out from other studies of Phoenician history: the source-focused approach and the attention paid to the various ways that biases—ancient and modern—have contributed to widespread misconceptions about who the Phoenicians really were. The book describes and analyzes various artifacts (epigraphic, numismatic, and material remains) and considers how historians have derived information about a people with little surviving literature. This analysis includes a critical look at the primary texts (classical, Near Eastern, and biblical), the relationship between the Phoenician and Punic worlds; Phoenician interaction with the Greeks and others; and the repurposing of Phoenician heritage in modernity. Detailed and engrossing, The Phoenicians casts new light on this most enigmatic of civilizations.

"The Phoenicians is a clear, up-to-date, and balanced assessment of one of the less known great civilizations of the past. It has maps, photographs of objects, and recreation illustrations. Suitable for anyone keen to understand the basics, become familiar with current historical debates and comprehend Phoenicia in relation to historical rivals and partners."

“Firmly grounded in material and written records and incorporating the latest discoveries and perspectives, Jigoulov offers a compelling and accessible view of Phoenician culture, one that brings us closer to understanding this much influential and resilient Mediterranean civilization.”

“In his uniquely accessible and fitting contribution to the Lost Civilizations series, Jigoulov ably rescues these enigmatic peoples from a seemingly impervious past. He virtually transports them to the twenty-first century, affording us the unprecedented opportunity to encounter 'the Phoenician' in a new, highly metamorphosed form.”

“The Phoenicians is full of data and reflections, with an up-to-date bibliography containing works in several languages. This fact is very important compared to other similar texts because much of the literature is not in English. The author is therefore the intermediary of important studies and provides readers with an updated, correct, and enjoyable picture of the fascinating and elusive world of the Phoenicians.”

This book explores the history and artistic heritage of the much mythologized Phoenicians, as well as the scope of their maritime and colonizing activities in the Mediterranean. Two aspects of the book will stand out from other studies of Phoenician history: the source-focused approach; and the attention paid to the various ways that biases, ancient and modern, have contributed to widespread misconceptions about who the ‘Phoenicians’ were.

We will describe and analyse various sources (epigraphic, numismatic, material remains) and consider how historians have derived information about a people with little surviving literary heritage. We will also consider how the term ‘Phoenicians’ was one attached by outsiders, arguing that the ‘Phoenicians’ did not see themselves as belonging to a single ethnic or cultural entity; rather, they maintained their distinct identities as inhabitants of individual city-states (Sidon, Tyre, Byblos) that happened to be in close proximity to one another.

The Phoenicians are frequently mentioned in the Hebrew Bible, and we explore ancient Jewish views on Phoenicia and its people. Finally, we consider the Mediterranean as a place of competing political and economic agendas, where we explore Phoenician colonial activities and their interaction and competition with the Greeks and others.

The book sets out to focus on aspects of Phoenicia and the Phoenicians that deserve deeper inquiry, including a critical look at the primary sources (classical, Near Eastern and biblical), the relationship between the Phoenician and Punic worlds, and the issue of cultural appropriation of the Phoenician heritage in modernity.

A few words should be said about technical matters. In consulting sources, preference was given to English-language materials, but sources in other languages have been employed as well. In transliterations, the most commonly used, simplified variants have been preferred, making it easier for the reader to look up names and places.

The argument will emerge that we should not consider the Phoenicians as a single people, nor Phoenicia as a single polity. Although the terms ‘Phoenicians’ and ‘Phoenicia’ are used throughout these pages for the sake of convenience and simplicity, when referring to Phoenicians and Phoenicia, no such unity is implied.

ONE: THE PHOENICIAN HOMELAND: HISTORY AND ARCHAEOLOGY

"The Phoenicians are a clever branch of the human race and exceptional in regard to the obligations of war and peace, and they made Phoenicia famous. They devised the alphabet, literary pursuits, and other arts too; they figured out how to win access to the sea by ship, how to conduct battle with a navy, and how to rule over other peoples; and they developed the power of sovereignty and the art of battle."

So wrote the Roman author Pomponius Mela in his De situ orbis (Description of the World) in the first century CE. He, like many others in the ancient world, admired the Phoenicians for their contributions to human civilization. In this chapter, we will consider the history of Phoenicia by placing it in the context of the Ancient Near East and introduce the major events, themes and topics of both the Phoenician homeland and the broader Mediterranean. Our focus will be on the period from 1200 BCE to the end of the Persian period (332 BCE) – the scholarly consensus regards these centuries as the time when the Phoenicians were most visible on the international stage, although we will briefly venture into the Hellenistic and Roman periods as well. We will also address the material culture (mostly pottery, burials and building remains), either to derive missing information or to test the evidence drawn from written sources. We will focus mostly on homeland Phoenicia, understanding that Phoenician colonizers in the Mediterranean, once having established their bases, would develop and sustain their new artistic and cultural traditions with only a tangential nod to the heritage of the Phoenician homeland.

Geography and climate of Phoenicia

Geography was crucial in the social, cultural and political life of Phoenicia, at least in the minds of the classical authors who envisioned and defined it. Although Graeco-Roman writers thought of Phoenicia as a land between the Gulf of Alexandretta (İskenderun, on the coast of modern Turkey) to the Gulf of Suez, in reality the Phoenician homeland occupied a relatively narrow strip of land (10 kilometres at its widest) stretching from southern Syria to northern Palestine between the Lebanon Mountains and the Mediterranean Sea. That land was further naturally divided by rivers and mountains, including the Anti-Lebanon Mountains, which run parallel to the Lebanon Mountains and which served as a natural border between Phoenicia and Syria. Protected from the east by the mountain range, the people inhabiting Phoenicia had an easier and more secure environment in which to set up and develop a system of urban settlements. The coastal location afforded additional opportunities for seafaring as the two largest polities, at least initially, Arwad and Tyre, were island city-states, providing an easy way to sail westward. Opportunities for agriculture were provided by the Beqaa Valley, rising about 1 kilometre above sea level and located 30 kilometres to the east of Beirut between the Lebanon and Anti-Lebanon mountain ranges. Two rivers flowing through the valley, the Orontes and the Litani, kept it well irrigated for growing crops.

The climate of Phoenicia was more or less comparable to that of modern Lebanon, as palaeoenvironmental evidence based on the study of tree rings has suggested. In essence, it was a Mediterranean climate with subtropical characteristics. In winter, storms from the Mediterranean moved eastward, bringing with them abundant precipitation (750–1,000 mm) and mild temperatures (around the low 10s Celsius), but summertime was usually hot and arid, with temperatures reaching the low 30s Celsius. Temperatures and precipitation would vary depending on the location, higher altitudes receiving more rain (and snow in wintertime). Such a climate afforded the growth of many kinds of trees, including cedar. A valuable resource for shipbuilding and construction in ancient and medieval times, cedar is the symbol of Lebanon and is even prominently featured on its currency.

The territory of what we consider Phoenicia was continuously occupied from the dawn of humanity. The earliest artefacts, sharpened splinters of flint dating to around 700,000 years ago, were discovered in Borj Qinnarit, near Sidon, and traces of human occupation in Lebanon have been discovered at dozens of Stone Age sites. Josette Elayi points out that the three main habitat types from that period are caves, rock shelters and open-air settlements. We have little concrete information about those earliest societies, but we can surmise that they were primarily hunter-gatherers. However, things started to change in the Chalcolithic period (also referred to as the Copper Age, c. 4500–3500 BCE). This period is best illustrated by the findings at Byblos, Sidon-Dakerman (near Sidon), Khalde ii and Minet ed-Dalieh, on the Lebanese coast, and the inland sites of Mengez and Kfar Gerra. From 1924 to 1975, Maurice Dunand, a French archaeologist, carried out thorough excavations at Byblos, the longest continuously occupied site in Lebanon. Our knowledge of the entire chronology of human occupation of the Lebanese coast is based primarily on his work there. Among the features of Byblos and other Chalcolithic sites is the emerging use of jar burials (besides plain and cave burials) accompanied by a great variety of burial goods. Another prominent feature of the Chalcolithic era is the organization of dwellings into private houses, silos and paved roads. Private houses were primarily single-room stone-walled constructions reaching a size of 6 × 9 metres and evolving either into circular or square dwellings by the end of the Chalcolithic period.

Based on the close proximity of dwellings to burial sites, archaeologists conclude that the Chalcolithic societies in Lebanon were mostly sedentary, with no clear social hierarchy, as burial goods comprise symbols of power (weapons) as well as everyday goods. Burial goods are indispensable for archaeologists, since valuable conclusions can be derived from even the most pedestrian objects. For Chalcolithic Phoenicia, these bone artefacts, pottery, ornaments and metal objects provide clues about human occupations, which included herding, agriculture, fishing, hunting and crafts. The grave goods also reveal that Chalcolithic pottery was rather plain and made without the use of a potter’s wheel, suggesting that the pots were produced for everyday use in the shortest time possible. A gradual move away from bones to metals is characteristic of all Chalcolithic societies, and the burial goods in Phoenicia illustrate this process by the use of copper arrowheads for weapons and silver ornaments. Overall, the Chalcolithic period was a transitional time between the Neolithic period and the Bronze Age, and it introduced several technological developments that paved the way for societal progress in later eras.