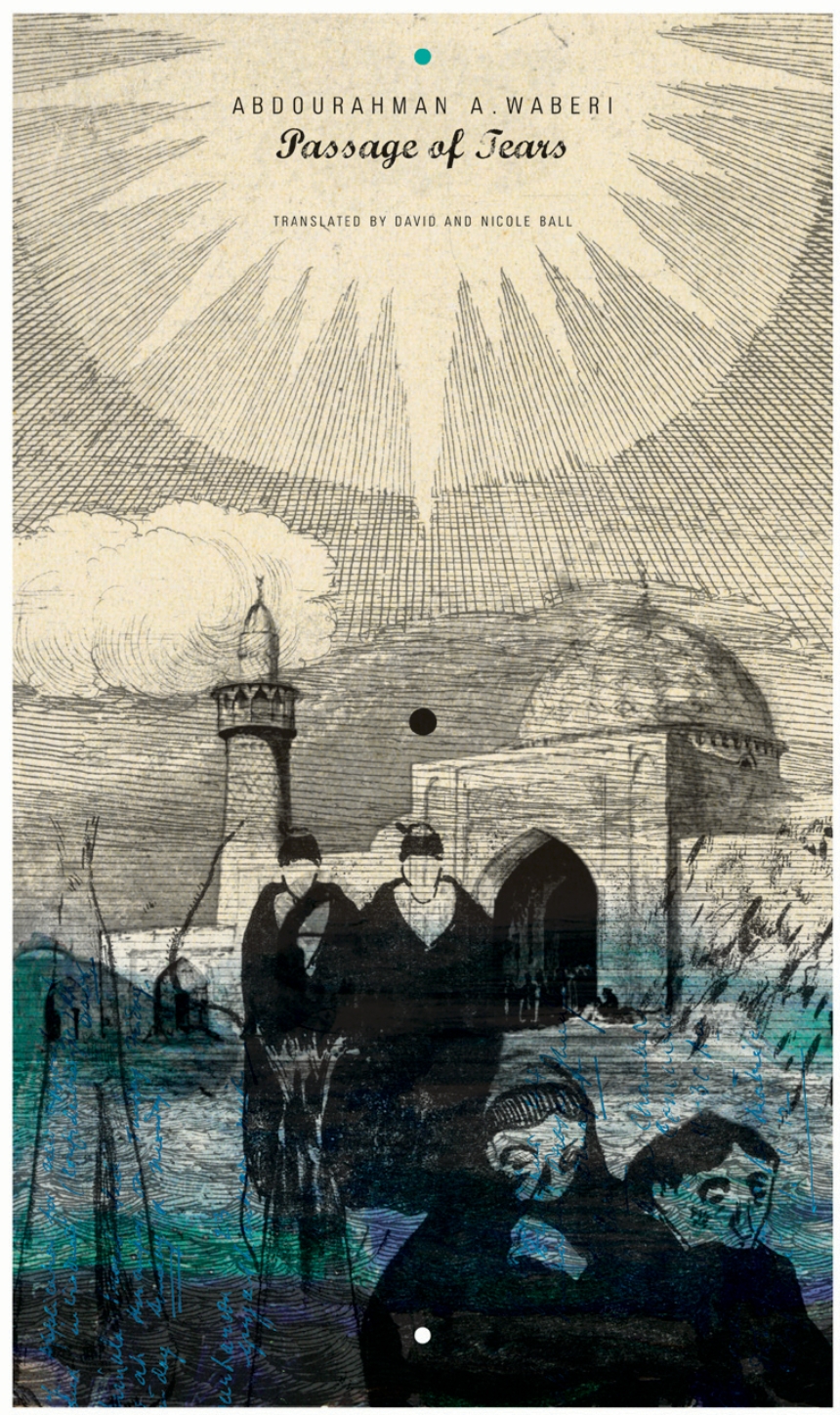 Translated by David and Nicole Ball

Translated by David and Nicole Ball

Djibouti, a hot, impoverished little country on the Horn of Africa, is a place of great strategic importance, for off its coast lies a crucial passage for the world’s oil. In this novel by Abdourahman A. Waberi, Djibril, a young Djiboutian voluntarily exiled in Montreal, returns to his native land to prepare a report for an American economic intelligence firm. Meanwhile, a shadowy, threatening figure imprisoned in an island cell seems to know Djibril’s every move. He takes dictation from his preaching cellmate known as his “Venerable Master,” but as the words are put on the page, a completely different text appears—the life of Walter Benjamin, Djibril’s favorite author.
Passage of Tears cleverly mixes many genres and forms of writing—spy novel, political thriller, diary (replete with childhood memories), travel notebook, legends, parables, incantations, and prayers. Djibril’s reminiscences provide a sense of Djibouti’s past and its people, while a satire of Muslim fundamentalism is unwittingly delivered through the other Djiboutian voice. Waberi’s inventive parody is a lesson in tolerance, while his poetic observations reveal his love and concern for his homeland.
Praise for the French Edition
“Disguised as a political thriller, Passage of Tears is above all a great novel of childhood, murderous identities, and exile.”—Le Monde des Livres
“A gripping book, burning with urgency and tension.”—Télérama.

“With Waberi, the juxtapositions—surprising, provocative, and original—form a good part of the thrill themselves.”

“Waberi has concocted with his magical alchemy a tale that blends political thriller, legends, spy novel, and the diary of a man tailor-made for the know-it-all.”

“Passage of Tears is a cerebral modern thriller (of sorts) that defies easy categorization…. Equally at ease in both First and Third Worlds (and all their trappings), Waberi manages the rare feat of handling and integrating Western intellectual and political thought as comfortably and convincingly as he does the ideologies and culture of the Horn of Africa (and that without overwhelming the actual fiction).”

“If Waberi’s books are any indication, the novel of ideas, long regarded with indifference if not suspicion, may be set for a renaissance. Waberi is unabashed and unusually adept in creating heart-wrenching stories that test general assumptions, politically correct and incorrect, about exile, tolerance, métissage, the hypocritical cynicism of postcolonial Western foreign policies and development, the pragmatic cynicism of aspiring political and religious factions in the developing world, and the ruthless machinery of a global economy.”

“[A] palpable illustration of life in Djibouti. In supple flowing prose, Waberi layers image upon image of life in that arid, rocky land where the Arabian and Red Sea meet in the Gulf of Tadjoura. . . . Ultimately Passage of Tears is a story about rejection, estrangement, and exile. Waberi delivers a satisfying end that readers will consider many more times after the pages are tucked into the bookcase. Set at a strategic geographic crossroads, the novel brings together the primary branches of Abrahamic tradition in their modern and ongoing struggle for dominance and restoration.”

Part I: Devil’s Islets
Part II: Bab-el-Mandeb or the Gate of Tears