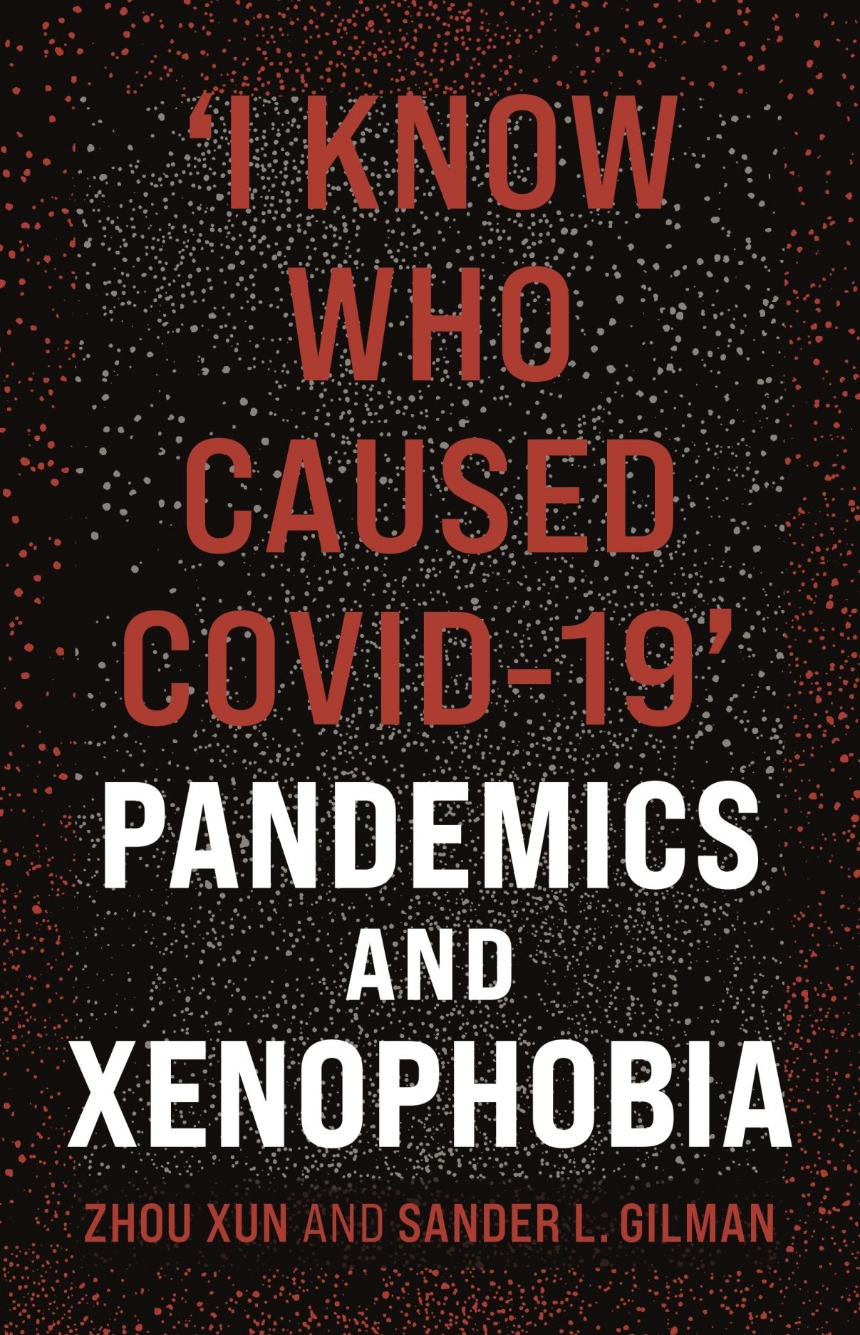 A timely exploration of the global explosion in xenophobia during the COVID-19 pandemic.

This is a timely, cogent examination of the blame and xenophobia that have been brought to the surface by the COVID-19 pandemic.

“The questions of where [COVID-19] came from, and just who is responsible for all this devastation and loss, have assumed outsize importance. This is perhaps why blame has become central to many discussions, with all the problems that brings. People want to know whose fault COVID-19 is. Zhou and Gilman explore this territory in their book... The authors examine the experiences of, and attitudes towards, a number of groups that have found themselves in the spotlight.”

"This book is a timely contribution to contemporary debates about racism and xenophobia, and how to understand them in order to combat them more effectively in the context of this pandemic. . . . The book provides a range of evidence on the backstories involved, the histories of pandemics and reactions to them in earlier times. There is a wealth of detail, covering a wide range of materials."

"Zhou and Gilman have jointly written a timely, relevant book that looks at how the COVID-19 pandemic ignited xenophobic tendencies long present in society... Weaving history, public health, and social commentary together, the book reveals the influence of political rhetoric on policies and health behaviors (e.g., masking, vaccinating) as well as assigning blame during pandemics. Recommended."

"Zhou and Gilman should be congratulated for their deeply intriguing, thought-provoking book, which will appeal and be of great use to a broad general audience, as well as medical and public health practitioners. The cultural contagiousness of xenophobia, of blaming pandemics on non-Western and marginalized out-groups certainly bears witness to a long history of public health, one we have repeatedly witnessed during the COVID-19 pandemic."

“While still in the midst of a public health crisis, we are fortunate to have two scholars who expertly weave their way through the infectious and symbolic threats that have roiled us all. Mass death and moral panics, scapegoating and the weaponization of past victimhood, examples like SARS, Ebola, and AIDS, communal dynamics around race and religion: all these and more have been scrambled in the great distress of this plague. Through their nuanced analyses, Gilman and Zhou allow us to reconsider these matters and the forces that have distorted and upended attempts to respond to a global pandemic as just that.”

George Makari, director of the DeWitt Wallace Institute of Psychiatry, Weill Cornell Medicine, and author of "Of Fear and Strangers: A History of Xenophobia"

“If information about COVID-19 matters, read this book. Because information is what viruses provide us for better or worse. It is we who bring life to viruses—to the biological information they contain; to our reactions when we believe ourselves invaded; and to our xenophobic responses towards those we in turn blame. Indeed, there are many important lessons in this incisive analysis by Zhou and Gilman—about our sense of self; about our responsibilities and freedoms; about our fears of the foreign; and, above all, about our values and what we desire for the future. It is a brilliant accomplishment!”

A. David Napier, author of "The Age of Immunology: Conceiving a Future in an Alienating World"

PREFACE: IN TIMES OF STRESS

The title of this book should be a parody, yet it is not. Carol Midgley in The Times of London set the tone in April 2020: ‘Although I obviously believe the one that it was Greta Thunberg who caused Covid-19 to reverse climate change and that Russia has released lions to enforce social distancing. Although I also believe that the dinosaurs helped to build the pyramids and I have been quite tired lately . . .’. We have all been tired recently, not only by covid-19 but by the incessant and often crude attempts to deal with the emotional impact of the pandemic. Fear leads not only to denial (‘it’s all a hoax’) but to quackery (‘Hydroxychloroquine is an easy cure’) and accusations of conspiracy (‘Bill Gates/George Soros/the Communist Party of China planned this and it came out of their labs’). Yet these claims also have everyday real-world impacts. At the end of 2020 a bomb planted by Anthony Quinn Warner in downtown Nashville which destroyed city blocks was seemingly intended to demolish an AT&T transmission building, because the bomber believed that the new 5g network caused COVID-19. Dr Simone Gold, one of the loudest advocates for hydroxychloroquine, a quack cure for the virus advocated by Donald Trump (along with injecting bleach), was one of the insurrectionists who invaded the U.S. Capitol on 6 January 2021, where she filmed herself in the Rotunda decrying the new vaccine as an ‘experimental, biological agent deceptively named a vaccine’. ‘I know who caused COVID-19,’ they all screamed, as ‘they were given power over a fourth of the earth to kill by sword, famine, and plague, and by the wild beasts of the earth death and destruction followed them’, if we may cite the Book of Revelations (6:8). Our book looks at how accusations of all sorts about causing or transmitting or controlling the pandemic created communities, many of them online and thus global, but all of them intended to deal with the anxiety inherent in such a global pandemic. Fear has consequences, for individuals and for communities.

Thus our book was written, rewritten and rethought at the height of the 2020 COVID-19 pandemic. It concludes with a view back towards early twentieth-century pandemics, but begins in December 2019 with the initial appearance of a novel coronavirus, now identified as the severe acute respiratory syndrome coronavirus (2 SARS-COV-2), the cause of the disease later named COVID-19. Our timeline ends on 20 January 2021 with the inauguration of Joseph Biden as the president of the United States, in the midst of a catastrophic and deadly pandemic and a flawed rollout of the first vaccines made available – virtually a year to the day after the first case of COVID-19 was identified in the country. We have updated our findings as much as possible from our closing date to the date when our book went to press in April 2021. This is an arbitrary moment, but seems a necessary one to provide an arc to our narrative about blame and retribution.

The book thus examines a topic to which both authors have contributed essays and books over the decades. It is, one can say, a coming to terms with a lifetime of pandemics and epidemics, each of which was in the moment unique, never before experienced, staggeringly appalling in the threats to life and the functioning of society: from HIV/AIDS in the 1980s, which continues to cost tens of thousands of lives annually, to the various patterns of infectious disease – bovine spongiform encephalopathy (mad cow disease), foot-and-mouth disease, SARS, MERS, Zika – that have dominated the mass media as well as state public health authorities over the decades, to finding ourselves locked down in Washington and Essex, lecturing and living remotely, along with much of the world. Again, we might add, what became evident for both of us over the course of 2020 is that one of the common threads in our experience of disease as historians is that there was and is a substantial psychological component, both to the individual and collective processing of the fear generated by the disease and to our social responses to the stresses generated. What we are trying to do in this book is to examine how the complexity of such ways of dealing with fear mirror as well as distort what one can label our ‘normal’ manner of ego defence. There is nothing inherently pathological in the mechanisms that Anna Freud outlined in her The Ego and Mechanisms of Defence (1936). The defences of the ego under normal circumstances can take the form of repression, displacement, denial, projection, reaction formation, intellectualization, rationalization, undoing and sublimation as well as identification with the aggressor or self-hatred. What are of interest in this present book are not the underlying substrata but rather the rhetorical and thus political functions that these mechanisms manifest. How do we articulate repression, denial, identification and so on in very specific settings and circumstances – explicitly, in these cases, those generated by the experience of living in cultural communities in the time of COVID-19? We have approached this question as sceptics, knowing full well that as we too live in the shadow of this experience, our readings are always fragmentary and unfinished. We rely for our materials, as can be evident, on the mass media, print and virtual, as well as on the critical literature. The latter has been expanding over the experience of the pandemic and we see in it also a reaction (as we understand our own work to be) to this experience.

In times of stress such as during epidemics, ancient prejudices and primeval fear, always beneath the surface, can be brought to life to haunt us. When recounting the tale of the Plague of Athens in 430 BCE, the historian Thucydides blamed the Ethiopians for causing the epidemic, which led to the moral disorder that took hold of the city and had long-lasting negative consequences. From this first account of a pandemic in the West, the fear of the Other has become a permanent feature of all epidemics. Counter-epidemic hysteria always attributes new diseases and their mutations to the actions and behaviours, malevolent or merely different, of the Other. Unfamiliar cultural practices, anything ‘foreign’, from foods to body odours to the colour of the skin, as well as patterns of sociability, are defined as threats that covertly or overtly undermine our health and the fabric of our perfect/normal society. Thus the identity of a group is often constituted, not solely by common interests, geography or even politics, but by a clear definition of where danger lies. In our age of growing anxiety over globalization and migration as well as excessive lifestyle, the fear of the diseased stranger and infectious contact as well as ‘horrors of diversity and excess’ are replicated and proliferated at an alarming rate through viral media, and have become equally contagious and dangerous. The now common metaphor of the virus for exploding online communication, a virtual viral infection, reflects our underlying fears. Viruses and the fear they generate are just information badly processed. Normally they sit inert, sometimes for thousands of years. Indeed, we live in a web of viruses, fungi, prions and bacteria. Human networks bring them to life and transmit them to others. What Thucydides did in his relatively cheap and easily copied papyrus scrolls is now replicated a billion times over on the World Wide Web.

Social psychology has long recognized this need to project anxiety and has given it a label: xenophobia.4 Its older roots, as one of the authors of this essay has argued, lie in the debate in the Enlightenment about whether a misperception of difference that leads to antipathy is a normal or a pathological response. Are we pre-programmed to so respond to perceived difference or is this a learned experience? By the early twentieth century this debate remained unresolved. In English, according to the Oxford English Dictionary, the word first appeared in 1909 in the Athenaeum: ‘Those whose sense of justice and fair play is not impaired by prejudice or “xenophoby”.’ Not too much later Sigmund Freud, for example, sees this as a natural process for the collective. For, as he noted in his 1921 paper on mass psychology, ‘We are no longer astonished that greater differences should lead to an almost insuperable repugnance, such as the Gallic people feel for the German, the Aryan for the Semite, and the white races for the coloured.’ For Freud this is an inherent problem to be overcome, but the irrationality of the fear of the Other is not ‘unnatural’. Is xenophobia a problem that defines individual or collective belief and action? Is it an aberration or a natural phenomenon?