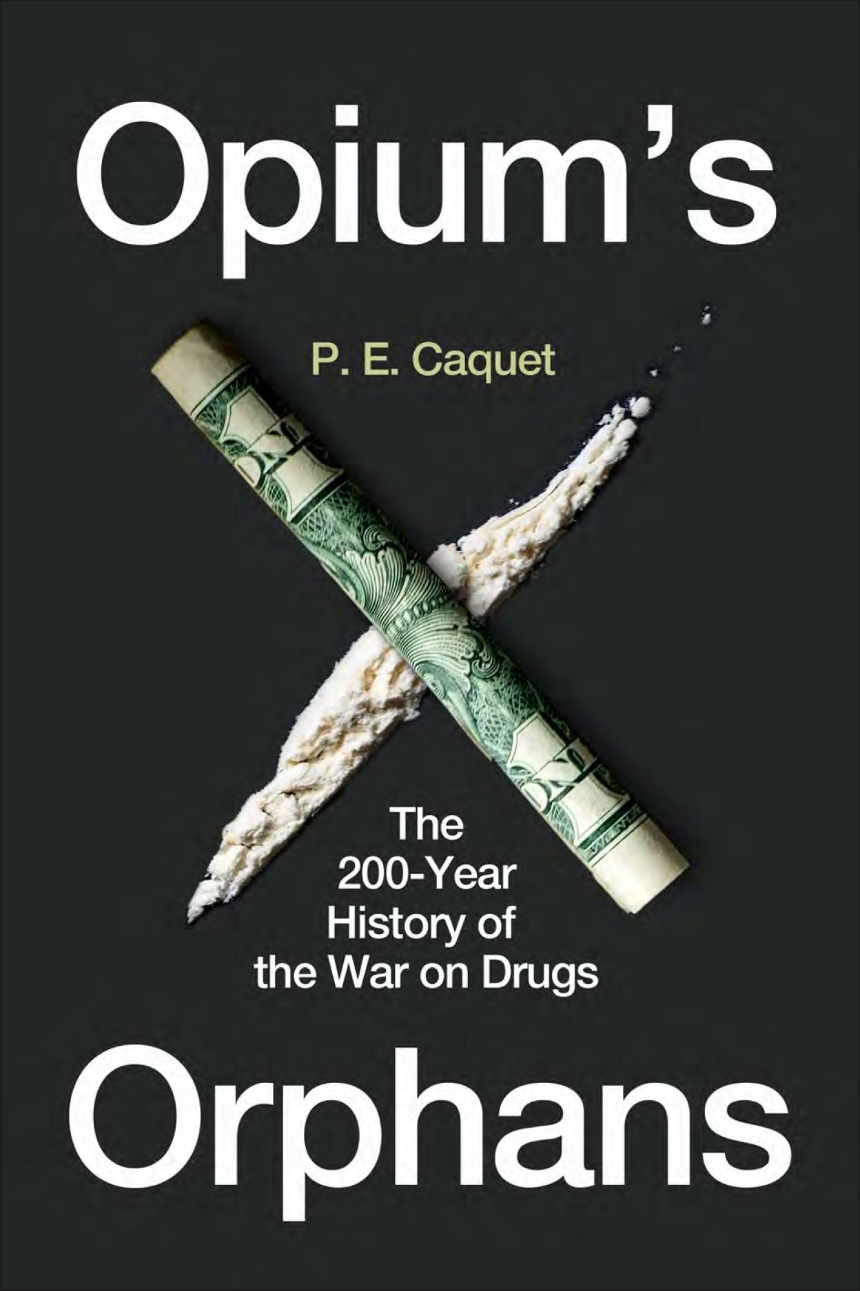 The 200-Year History of the War on Drugs

The 200-Year History of the War on Drugs

Upending all we know about the war on drugs, a history of the anti-narcotics movement’s origins, evolution, and questionable effectiveness.

Opium’s Orphans is the first full history of drug prohibition and the “war on drugs.” A no-holds-barred but balanced account, it shows that drug suppression was born of historical accident, not rational design. The war on drugs did not originate in Europe or the United States, and even less with President Nixon, but in China. Two Opium Wars followed by Western attempts to atone for them gave birth to an anti-narcotics order that has come to span the globe. But has the war on drugs succeeded? As opioid deaths and cartel violence run rampant, contestation becomes more vocal, and marijuana is slated for legalization, Opium's Orphans proposes that it is time to go back to the drawing board.

"Opium's Orphans is a fascinating, provocative, and nuanced account of the mess we've gotten ourselves into. Now, we continue the work of trying to get out of that mess."

"With the exception of certain synthetic hallucinogens, all prohibited drugs are fallen medicines. Opium’s Orphans is a comprehensive survey of the attempts to make recreational drugs, and the cultures of consumption they have generated, subject to a global law enforcement enterprise."

"Beautifully written. Meticulously researched. Caquet elegantly weaves together an eclectic range of sources and narratives to produce an edifying and entertaining account of the long and complex rise of prohibition and related endeavors to suppress 'narcotics.' Combining breadth and depth of analysis with valuable and timely historical insights, Opium’s Orphans merits a wide and attentive audience."

"Opium’s Orphans is that rare book which is thoroughly researched, well written, and engaging. It asks important questions of the global drug control regime by tracing its history from early Chinese prohibitions of opium to the present day. The final chapter shows how the regime is challenged by current developments, such as the legalization of cannabis, pharmaceutical industry-driven opioid epidemics, and extreme violence within some drug markets. Overall, it is a welcome contribution to the growing revisionist literature on the history of drug prohibition."

In the leafy town of Taiyu, Shanxi, an inland Chinese province southwest of Beijing, the district magistrate Chen Lihe had a stele put up for public display. The date was 1817 and, four years earlier, the emperor had issued a raft of regulations against opium, including severe punishments for handling, selling or consuming it. The stele read:

Opium is produced beyond the seas, but its poison flows into China. Those who buy it and consume it break their families, harm their own lives, and violate the law. Treachery, licentiousness, robbery, and brigandage all arise from it. Both the young and vigorous and the old and weak die from it. Wealthy and luxurious houses are impoverished by it. Brave and bright sons and younger brothers are made stupid and unfilial by it. People who dwell in peace in their houses well stocked with delicacies feel the heavy blows of the bamboo and the weight of the cangue because of it; they also suffer strangulation, exile, and banishment at the hands of the law because of it.

As for its injurious effect on custom, opium destroys the five natural relationships, and its harmful effect on individual character is even more unspeakable . . . To eradicate a great scourge, its source must first be cleansed. If the district were without traffickers, from where would my people buy opium? If there were no traffickers outside its boundaries, from where would my district buy opium? . . . Henceforward, all merchants in the district who go to Fujian, Guangdong, Jiangsu, or Zhejiang to buy goods must pledge that they will not bring a single fragment of opium back to Taiyu for sale, to the great harm of its populace. If they render respectful adherence to their oaths of abstinence, the spirits will surely reward them. If they resume trafficking, the officials will certainly punish them! And if official law cannot reach them, the spirits will surely lend assistance.

By proclaiming the severest penalties against everything to do with opium, including its possession, the Chinese imperial court had in 1813 launched an all-out campaign against the drug. It sent out orders for enforcement throughout the country, including to provinces, such as Shanxi, that lay far from the coasts through which opium flowed. The stele reveals motivations that ring surprisingly modern. Opium, like modern drugs, was identified as a potentially deadly ‘poison’, and the text suggests it made consumers dependent (making the brave and bright ‘stupid and unfilial’ and having an ‘unspeakable’ effect on character). Socially, it threatened to make its adepts downwardly mobile (‘Wealthy and luxurious houses are impoverished by it’). Beyond this, it was identified as a cause of crime and public disorder (‘Treachery, licentiousness, robbery, and brigandage all arise from it’). Its lyrical language aside, the epigraphical message rings much like any statement condemning drugs today.

Qing dynasty China was the first state to ban drugs, or at least the first to do so on the basis of justifications that remain relevant today. The stele’s appeal to the spirits, called on to lend a hand to officials in hunting down traffickers, sounds a quainter note. Yet religious agitation would also arise in Europe and the United States as a powerful force for drug prohibition in the nineteenth and twentieth centuries. Moral stigma and religious imagery remain part of the vocabulary for condemning drug users to this day. Our Taiyu magistrate lastly made the point that ‘opium is produced beyond the seas’ and that ‘to eradicate a great scourge, its source must first be cleansed.’ China’s opium came from India and the Middle East. The belief that supply could more easily be cut off because it originated abroad was, and is, darkly seductive. States are forever prone to treat their drug problems through border policing or by placing pressure on foreign countries, avoiding the unpleasant business of confronting their own citizenry. No nostrum would feed the long war on drugs more consistently than the idea that intoxicants can simply be eliminated at source.

The emperor’s penalties for smoking opium, introduced in 1813, were a hundred blows of the bamboo cane and one month in the cangue – a type of mobile wooden pillory affixed around the head that prevented the prisoner from feeding him- or herself. Public officials caught smoking would be dismissed. Under provisions that had lapsed or been allowed to fall into neglect but were now revived, traffickers were liable to the additional penalty of transportation to the frontier for service as military labourers. As to the operators of opium dens –public houses whose chief business was to dispense opium for smoking– they faced the extreme punishment of death by strangulation.

It is worth highlighting that at the time of these prohibitions, the Qing empire scarcely had a rampant opium problem. China’s opium smokers could not have numbered more than a few tens of thousands in 1813 – at most 10,000 to 20,000, if taken to mean addicts. This was a tiny proportion of its population of more than 300 million. Per capita consumption, at around 600 grams (1.3 lb) per thousand annually, was actually lower than that of England and Wales in a comparable period, at 725 grams (1.6 lb) per thousand. Opium was freely available in Britain, where it was routinely taken as a painkiller in pill or drink form.

It is from these humble origins that drug control has grown, over two centuries, to achieve the far grander proportions it has today. The war on drugs did not originate in the USA. Even less did it begin, as is sometimes believed, with Richard Nixon. Nixon was not even the first American president to declare such a war: in 1954 President Eisenhower had called for ‘a new war on narcotic addiction at the local, national, and international level’. Modern drug prohibition originated in China. Two Opium Wars ensued from the prohibition edicts, forcing the drug on the Qing empire. Yet the wars attracted moral censure in the United States and left a stain of guilt in Britain. At the beginning of the twentieth century, American, Chinese and European diplomats assembled at a set of conferences to reform the trade in the drug. These conferences established the norms for present-day anti-narcotics legislation, national and international. The Chinese and Americans were on the offensive, and the Europeans were eager to make amends, or at least to be seen to be doing the right thing: the result was drug prohibition. From there, controls over the narcotics trade passed on to the League of Nations and later the United Nations (UN), turning into a global endeavour.

Accompanying this process, the set of regulated drugs expanded to involve an increasingly broad array. Opium is an addictive drug derived from a plant, a white-flowered variety of poppy, whose seed pod yields the juice from which it is made. Chemically refined, it can be transformed into a range of compounds collectively known as opiates, among which are morphine and the even more potent heroin. Consumers of opiates numbered 29 million worldwide in 2017. Yet patterns of drug use and the list of prohibited substances have changed out of all recognition since Qing times. According to estimates compiled by the United Nations Office on Drugs and Crime (UNODC), over a quarter of a billion people used illegal drugs of any kind in the same year, or around 5 per cent of the world’s adult population. The schedule now includes cocaine, a drug invented in the nineteenth century, but also a paraphernalia of stimulants and hallucinogens which, though often sold under the labels of LSD or Ecstasy, are constantly evolving in composition. Consumers of the synthetic stimulants known as amphetamines now outnumber opiate users worldwide. Amphetamines have become the drug of choice in several Asian countries, including China, Japan and the Philippines. Finally, the prohibited list includes the plant-based cannabis or marijuana, whose use is as ancient as opium’s – though its recent legalization in a number of U.S.. states and in two countries, Uruguay and Canada, suggests that it may one day leave the group of illicit drugs.

It is the story of this transformation that this book presumes to tell: how an ever larger group of mind-altering products came to be prohibited throughout the world, for what reasons, and with what effects. Why are such drugs illegal today? Should they be? Has drug prohibition worked? What have its consequences been? Two hundred years ago, the Jiaqing Emperor chose to launch a campaign against anyone among his subjects who dealt in or smoked opium. Today, the UN and its 190-plus sovereign members actively police and punish drug trafficking and use worldwide. How did one lead to the other?