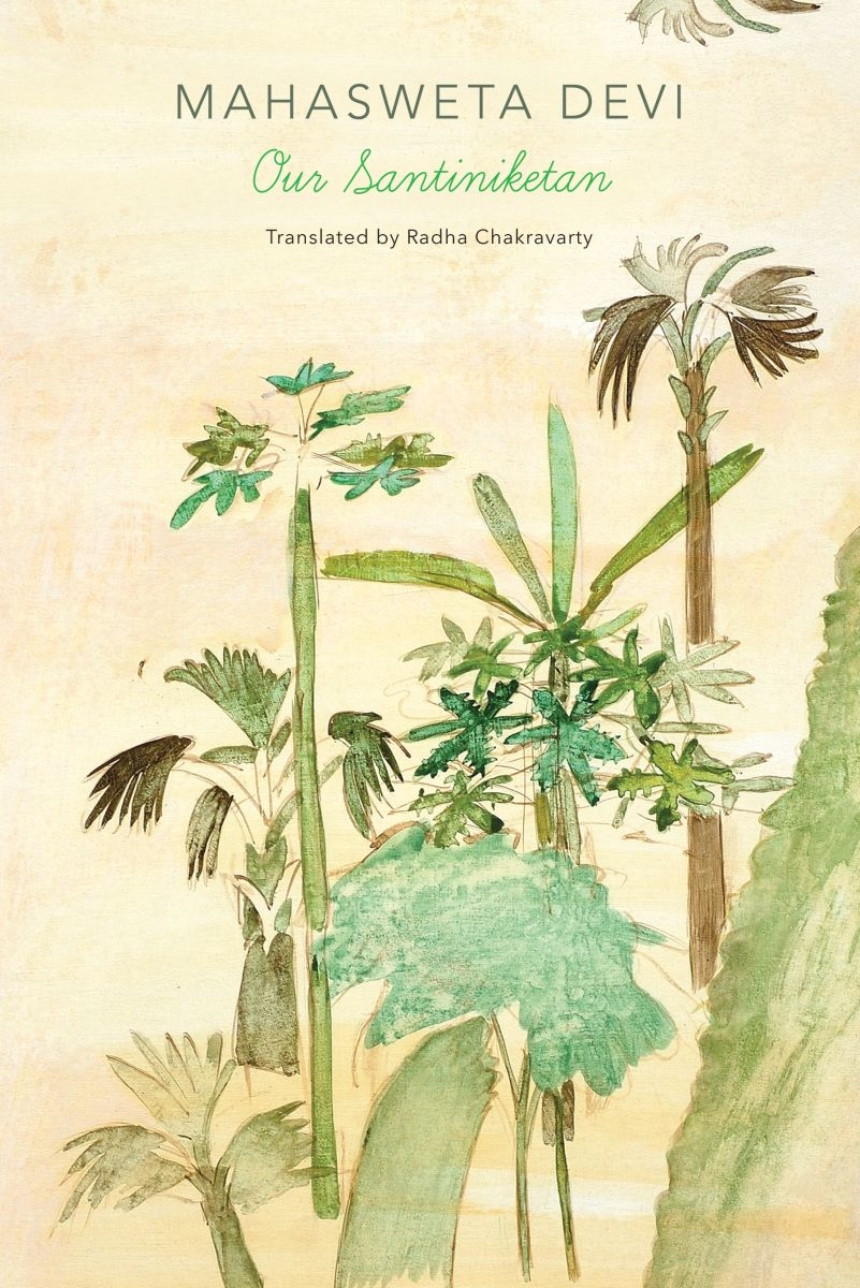 “Like a dazzling feather that has fluttered down from some unknown place. . . . How long will the feather keep its colours, waiting? The ‘feather’ stands for memories of childhood. Memories don’t wait.”

In Our Sanitikentan, the late Mahasweta Devi, one of India’s most celebrated writers, vividly narrates her days as a schoolgirl in the 1930s. As the aging author struggles to recapture vignettes of her childhood, these reminiscences bring to the written page not only her individual sensibility but an entire ethos.

Santiniketan is home to the school and university founded by the foremost literary and cultural icon of India, Rabindranath Tagore. In these pages, a forgotten Santiniketan, seen through the innocent eyes of a young girl, comes to life—the place, its people, flora and fauna, along with its educational environment, culture of free creative expression, vision of harmonious coexistence between natural and human worlds, and the towering presence of Tagore himself. Alongside, we get a glimpse of the private Mahasweta—her inner life, family and associates, and the early experiences that shaped her personality.

A nostalgic journey to a bygone era, harking back to its simple yet profound values—so distant today and so urgent yet again—Our Santiniketan is an invaluable addition to Devi’s rich oeuvre available in English translation.

"Written in 2000, shortly before the author’s 75th birthday, this book is an account of Mahasweta’s childhood experiences at the celebrated Visva-Bharati school, founded by Rabindranath Tagore in Santiniketan... the book is a record of a magical, Hogwarts-type experience... it is also an explanation of the idyllic experiences and philosophy on which Tagore’s education system was based."

Why I was sent to Santiniketan was something I often wondered about, later on. Tutul had many connections there, of course. And Ma’s maternal cousin Amiya Chakravarti was the Poet’s secretary, at one time. Chhoto Mama was there as well. In one voice, everyone (from Ma’s side of the family) declared that a per-son with a transferable job must place his children somewhere, so they can receive an education.

That ‘somewhere’ was Santiniketan. That the Santiniketan of those few years I spent there would come to occupy the place ‘closest to my heart’ in my memory, was something I didn’t realize at the age of ten.

Right from those times, I was very partial to my mother. Hearing that I would have to leave her and go away, I became very tearful. When Ma went over to Baba’s side, I felt unbearably bitter and reproachful.

The house from where I departed for Santiniketan was my maternal grandfather’s property in Dhaka, at 15 Zindabahar Lane, Armanitola. I left in 1936. Now I write this in December 2000. In sixty-four years, not only Dhaka-Kolkata-Faridpur-Rangpur, but even the Bahrampur I first saw in 1945 has really, really changed.

But the old cities live on in secret, hiding here and there. That is something to rejoice about, a matter of great solace. When I went to Dhaka, I didn’t search for Tikatuli, Kayettuli, the field at Ramna, Picture Palace at Armanitola—all those places so glowingly etched in my memory. I was terribly afraid that I wouldn’t recognize any-thing, that everything had been utterly transformed. But Rashid Haider assured me:
‘Didi! Your grandfather’s house remains exactly as it was.’

This proved to be a dazzling reality.

Somehow, the house has survived.  Why has it survived? Because the house is now a police outpost. A full-fledged police station is a phanri, what they call a thana. Some thanas have a younger brother. That younger brother is known as the phanri, or outpost.

What a priceless gift the city of Dhaka had given me! When I beheld the house, that was how I felt.  It was like finding that proverbial single jewel, the fabled treasure of seven kings. Readers, if you happen to be youngsters of seventy or sixty or fifty, then you will have listened to or read fairy tales in your childhood. You know, of course, how the princes in fairy tales performed such daring feats to gain possession of the seven kings’ treasure, that single jewel. That unique jewel, the seven kings’ treasure, signifies a pos-session that is priceless. Say, for instance, I chance upon a letter from my mother! That, too, would be an invaluable possession!

And the house where I was born, where I lived for so long, every nook and cranny etched in my memory — seeing that house still standing, exactly the same after sixty years, I was beside myself with joy.

On the terrace of that very house, I had wept because I had to leave for Santiniketan to take up my studies. Even at the age of ten, I was told again and again: you’re a big girl now, a big girl now. When you become a big girl, you can’t cry in front of others after all!