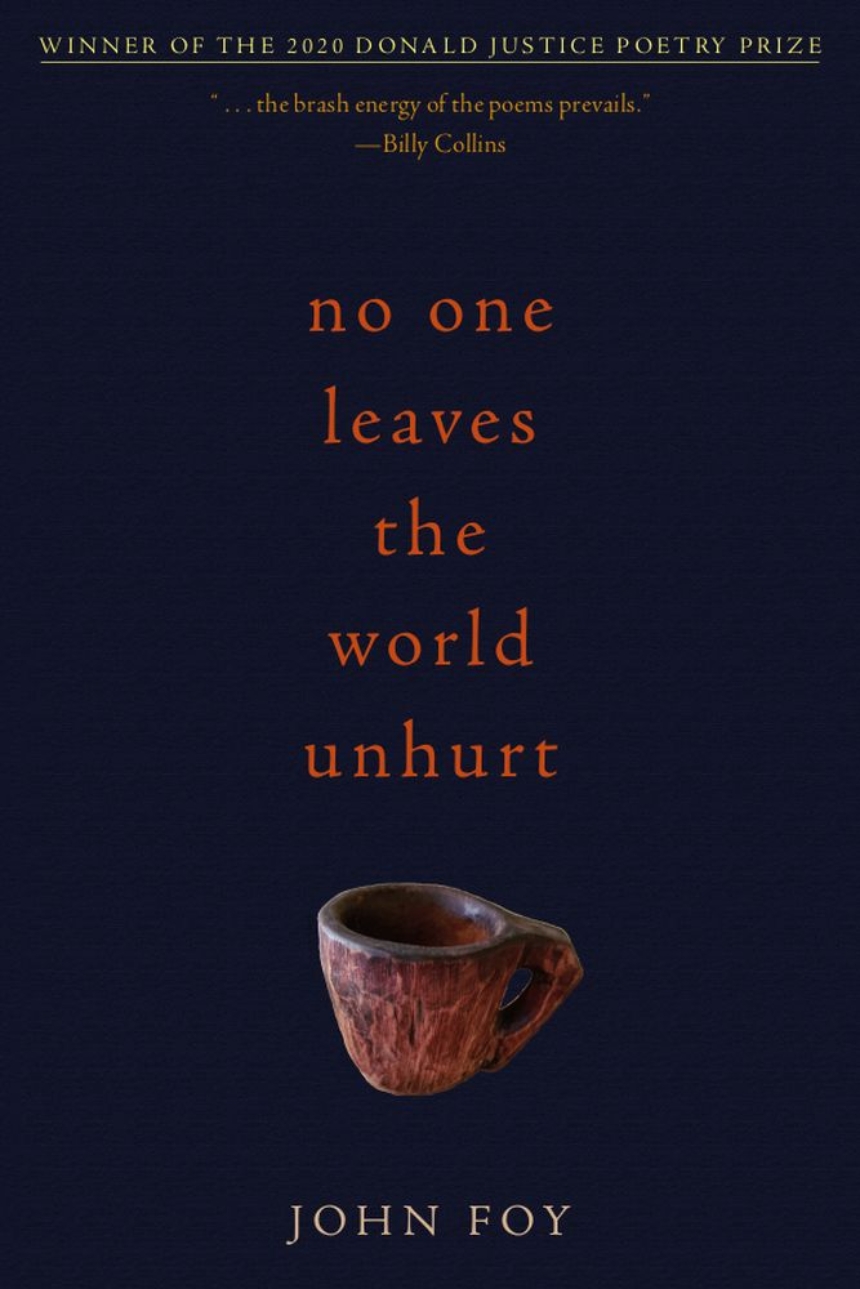 No One Leaves the World Unhurt

No One Leaves the World Unhurt

John Foy’s newest collection is a tour de force of formal poetry, offering a blend of wit, cleverness, and deftness. Working in the lineage of poets like Billy Collins, Robert Frost, Frank O’Hara, W. H. Auden, and Elizabeth Bishop, Foy probes everyday experiences to generate compassionate, clever, and deeply knowing verse. While moments in No One Leaves the World Unhurt may appear absurd or even funny on the surface—such as a psychological exploration of the Lord of the Rings character Gollum—beneath this lightheartedness lies a tone that is grim and foreboding. Foy satirizes various elements of contemporary society, reflecting on war, wandering through the Museum of Sex in New York with his wife, and plucking apart idiomatic speech, which he breaks down, saying “It is what it is. / It’s not what it might have been.” Influenced by pop art and fine art and his New York home, which forms the backdrop of many of these poems, Foy’s vibrant collection is simultaneously philosophical, whimsical, serious, and searching.

"Though Foy examines life through the lens of pain, the hurt we inflict on each other and the world, he allows all the humor, love, faith, and knowledge that come with that pain to permeate his poetry. That nuance creates an honest account of living and opens his poems to wisdom that at times seems contradictory, but only in the way that we are all contradictions of our past selves. The book’s title is an undeniable truth. No one leaves the world unhurt, but Foy’s poetry also shows us that we and the world can and often do heal together."

"Foy writes about this world, this moment we’re living in, but with a firm footing in the past and a powerful command of traditional forms which he bends and remakes to his own uses. No One Leaves The World Unhurt offers an open-eyed view of life, of what it is, of what it can be. . ."

“Taking aggressive advantage of the imaginative freedom that poetry offers, Foy breaks into some frightening places here, including the brutality of war, the terrors of the future, his own dead body, and the ‘crack house of [his] mind.’ This edginess is skillfully balanced by Foy’s formalist aptitudes, with inventive rhyming and sonnet skills on inconspicuous display. Still, the brash energy of the poems prevails. If some of them could drive themselves down Main Street, they would turn a lot of heads.”

Billy Collins, author of The Rain in Portugal

“This accomplished and lively collection trains anthropological high-beams on contemporary America’s frequently absurd patterns of thought and behavior. Foy’s poems are by turns witty and affecting: gravity is leavened by playfulness; humorous forays ride on serious undercurrents. Like Robert Frost, Foy can compose traditionally formal poems without losing or even fraying natural thought threads. He also deftly incorporates the lexicon of economics into his meditations on grief, sex, Barbie dolls and Atlas ‘shouldering the heavens like a man / with a second mortgage and child support to pay.’ At last, here is a voice that tells the truth in such a way that we want to keep on listening.”

"I find two things conspicuously missing in contemporary poetry. One is the quality that Keats called 'negative capability,' projecting the self into the minds and hearts of those who are different from the poet, perhaps even uncongenial to him. The other is the old-fashioned 'metaphysical' conceit, in which an everyday object becomes a controlling metaphor for the poem, and even the poet’s choice of form becomes the vehicle of meaning. Take it from me; John Foy possesses both."

R. S. Gwynn, author of No Word of Farewell