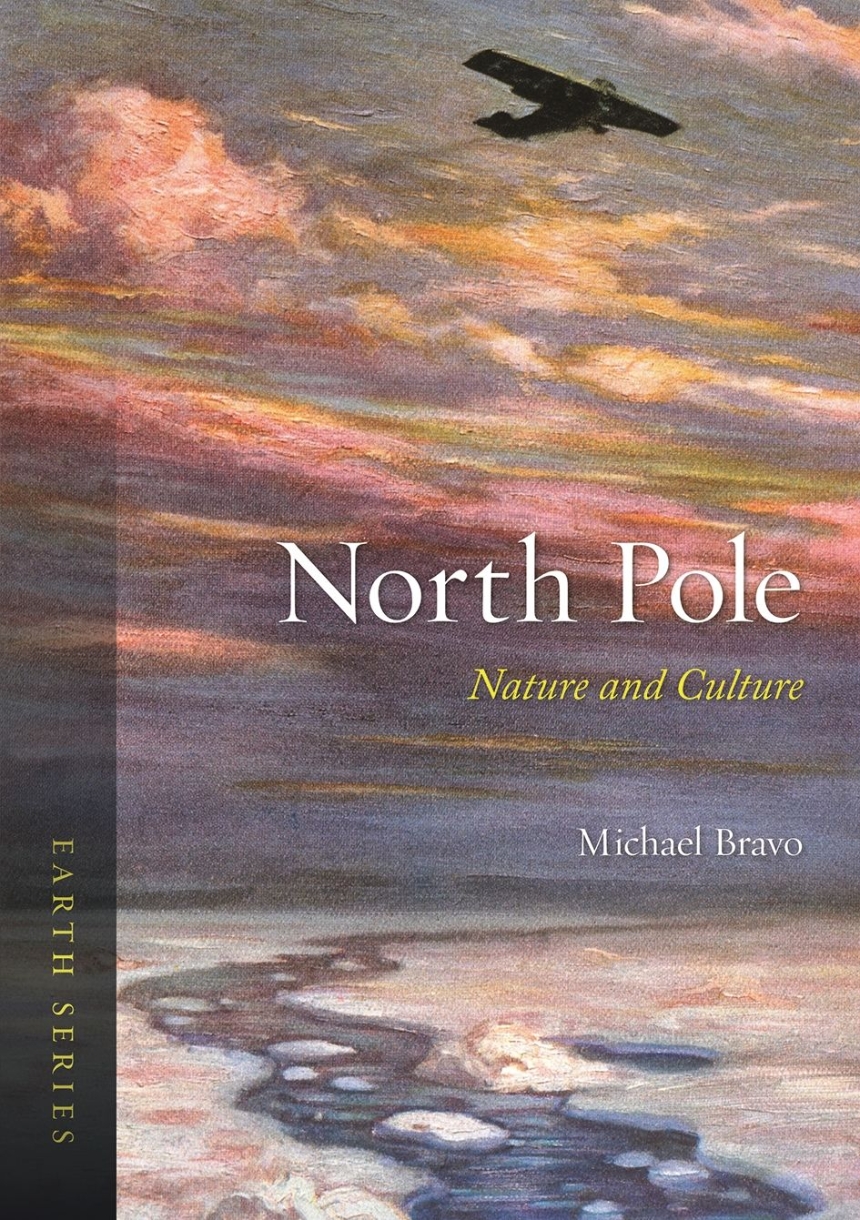 The North Pole has long held surprising importance for many of the world’s cultures. Interweaving science and history, this book offers the first unified vision of how the North Pole has shaped everything from literature to the goals of political leaders—from Alexander the Great to neo-Hindu nationalists. Tracing the intersecting notions of poles, polarity, and the sacred from our most ancient civilizations to the present day, Michael Bravo explores how the idea of a North Pole has given rise to utopias, satires, fantasies, paradoxes, and nationalist ideologies across every era, from the Renaissance to the Third Reich.

The Victorian conceit of the polar regions as a vast empty wilderness—a bastion of adventurous white males battling against the elements—is far from the only polar vision. Bravo paints a variety of alternative pictures: of a habitable Arctic crisscrossed by densely connected networks of Inuit trade and travel routes, a world rich in indigenous cultural meanings; of a sacred paradise or lost Eden among both Western and Eastern cultures, a vision that curiously (and conveniently) dovetailed with the imperial aspirations of Europe and the United States; and as the setting for tales not only of conquest and redemption, but also of failure and catastrophe. And as we face warming temperatures, melting ice, and rising seas, Bravo argues, only an understanding of the North Pole’s deeper history, of our conception of it as both a sacred and living place, can help humanity face its twenty-first-century predicament.

"At the start of his book, Bravo promises to 'treat the mysterious power and allure of the North Pole in a way you will not have seen before.' It is a promise he fulfills in North Pole, a narrative that avoids the usual histories of exploration. His mission is to chart the layers of meaning that the pole has accumulated in our minds and that motivates the explorers who try to reach it. . . . Bravo has written a rich and insightful book about our ideas of the pole. Although his focus is the North Pole, it left me thinking about the stories we all tell ourselves in our everyday lives."

"Rather than plunge into discussions of climate change or accounts of famous expeditions, Bravo chooses to begin his fascinating book by exploring the differences between Greek and Inuit attitudes to the Pole Star and explaining the relationship between celestial and geographical poles. . . . A learned, congenial guide, he is imaginative enough to recognize the importance of mythologies and traditions, together with subtle aspects such as trust (‘why a group of travelers from a particular culture will choose to trust their lives to a bearing based on the position of a fixed star’)—and he writes well. For anyone planning a quick visit, North Pole features beautiful illustrations, but there are real rewards for those prepared to go all the way."

"Until a little more than a century ago, no one had actually visited the North Pole. That did not stop natural philosophers, armchair geographers, novelists, and others from speculating about it. In North Pole: Nature and Culture, Bravo . . . discusses the 'mysterious power and allure' of one of the most inhospitable places on Earth. His ambitious text begins with the study of astronomy and the North Pole Star by early peoples such as the Inuit and the ancient Greeks, and then moves on to Renaissance polar maps and globes, the development of navigation by magnetic compass, polar expeditions, and a discussion of the North Pole as a literary and narrative device that has inspired numerous works of fiction and political satire. The slim, 254-page volume is nicely illustrated with more than one hundred paintings, engravings, and photos."

"Thousands of years before serious efforts were launched at reaching it, the top of the world had already become a fixation. In North Pole, Bravo looks at how true north has long beckoned humanity, from the glory days of Greece when the mystical land of Thule was introduced by the cartographer Pytheas, though the European Age of Exploration, and into modern times when climate change threatens to make real what nineteenth-century British theorists passionately believed to exist: an open polar sea at the highest latitude. . . . North Pole is replete with art, myth, legend, and history, lending us a deeper understanding not just of its topic, but of ourselves as well."

"Bravo diligently tracks discoveries, notably that of magnetism, drawing in the ideas and mythologies of Inuit peoples indigenous to the region. He reveals the planet yielding its secrets. Individuals emerge in the process as he conjures their achievements and theories. William Gilbert, for example, Elizabeth I’s doctor, was a brilliant inventor in the field of magnetism. . . . The strength of this short book lies in its illustrations—more than one hundred of them, brilliantly selected and reproduced. The whole volume is printed on glossy paper. The pictures range from sumptuous full-color portraits to woodcuts, drawings of little wooden ships in the pincers of a floe, and early maps. It’s hard to pick favorites."

"While explorers wrote accounts aiming to 'lift the veil on an Arctic shrouded in the mists of time,' satirists delighted in mocking their pretensions. Bravo's astute cultural history shows why the pole still provides a powerful 'source of reflection on the human condition of inhabiting the globe.'"

"In North Pole, his exhaustively researched new book, Bravo delves into the history of that northward obsession. . . . When we’re in the North, we continue to work in a realm of, at best, known unknowns. The climate is changing. The magnetic North Pole is migrating. But, as Bravo reminds us, our fascination with the North Pole remains fixed."

"A compelling counternarrative. Using lesser-known works by pre- and early-modern scholars of philosophy, history, science, and geography, as well as the records of navigators and expeditioners, Bravo argues that the value of the Arctic to contemporary thinkers rests in recovering the region’s past of robust Inuit social and cultural networks. Indeed, by displacing early fantastical visions of the Arctic with more historically and materially accurate understandings, Bravo suggests that the current perils facing the region—economic, climatological, cultural—might be ameliorated. . . . A well-written, thoughtful study in the burgeoning fields of environmental humanities and cryopolitics."

"The primary goal of a book review, in my opinion, is to let a reader decide whether to buy or borrow a copy for their perusal. In the case of North Pole: Nature and Culture, I think this book will appeal and be of interest to many students of Arctic history and science, and to a broader community of readers who are interested in the philosophical threads that link modern societies to our past imaginations and beliefs."

"North Pole covers a lot of ground, ranging from the ideas of the ancient Greeks to present-day environmentalists. . . . An inspiring read for experts and interested newcomers to the field of polar history and the history of science and technology alike."

"For any reader wondering why a point on the globe visited only by a very small number of people is worth a dedicated book, Bravo provides compelling answers in this well-written historical account. . . . Bravo is emphatically well-qualified to write such a history of the North Pole, given his extensive scholarship on Arctic topics such as Indigenous navigation, geopolitics, historic scientific expeditions, and contemporary climate research. . . . Bravo’s North Pole is an excellent read for both students and for scholars looking for a concise introduction to the myriad histories surrounding this point on the globe. However, even specialized Arctic historians and historical geographers will find new material and fresh insights in its pages."

"North Pole: Nature and Culture marks a turn away from accounts of individual expeditions and heroic explorers. This refreshing approach gives us the opportunity to consider a much wider multiplicity of meanings of the Pole than proposed by previous histories. . . . Readers seeking new information and different perspectives on a place which they believed had been definitely located will be rewarded by discovering that there are many more ways of approaching the North Pole, and many more North Poles, than they had previously suspected."

"For anyone with an interest in the Arctic regions it is a fascinating read. It covers a huge range of topics from astronomy and cartography, through exploration and navigation, to art, culture, mythology, and literature—and a fair amount of international polar politics. And along the way it introduced this amateur Arctic enthusiast to a plethora of North Pole concepts and facts that I had previously given little or no thought to. . . . An excellent and entertaining book."

"Bravo is an academic with impressive credentials, and his deep interest in the topic and his research background are both evident in this detailed study of the subject matter. . . . A wide-ranging and erudite study. . . . A good place to start for anyone with a nascent interest in this timeless subject."

"North Pole, although never claiming to be a book about cartography, is a good demonstration of the way maps can be well used to illuminate concepts in a variety of intellectual areas. And for anyone with a casual interest in the North Pole, the book provides an engaging survey of a handful of well-chosen historical and cultural polar topics. Endnotes, a select bibliography, and a good index are helpfully included."

"While global climate change is a relatively new concern, [the MOSAiC] expedition’s drift about the North Pole continues a long history, compressed in Bravo’s lively narrative, of people using that distant and alien locale to frame their understanding and representation of the world. A short and accessible book, North Pole: Nature and Culture provides beautiful illustrations along with readable accounts of some of the philosophers, cartographers, explorers, and fantasists . . . who have grappled with the North Pole and the Arctic region for millennia. . . . Scholars, students, and lay readers interested in the Arctic will find in Bravo’s informative book an engaging window on the intellectual history of the North Pole."

"In a lucid new analysis of how the North Pole has inspired natural scientists, philosophers, cartographers, and others from Ancient Greece to our days, Bravo lights a thrilling path in the dark. . . . In his recent book North Pole: Nature and Culture he deftly extinguishes any remaining doubts about the North Pole’s current cultural, historic, and phenomenological significance. . . . A rich and detailed account of the history and intellectual discovery of the pole."

"In North Pole, Bravo shows how one of the most inhospitable places on Earth has played a central role in cultures from the Inuit and ancient Greeks to the great nineteenth-century polar explorers and today’s environmentalists. It is an utterly unique piece of cultural history. . . . Bravo’s erudition is extraordinary, as is his fluent, accessible, and witty prose . . . As he observes at the end of this tremendous book, there are no visas required at the North Pole; it is the ultimate point of transnational cooperation and hope for our common futures. This is connected history at its finest; a wonderful achievement."

Jerry Brotton, Queen Mary University of London, author of "A History of the World in Twelve Maps"

"Bravo’s original study rediscovers an astonishing history of how the North Pole has been imagined and pursued across centuries and diverse cultures. From Inuit cosmography to Renaissance poetry, through Neoplatonic mathematics, mysticism, naval sciences, and ethnonationalism, Bravo uncovers the strange contours and multiple identities that continue to give the North Pole such magnetic charisma today."