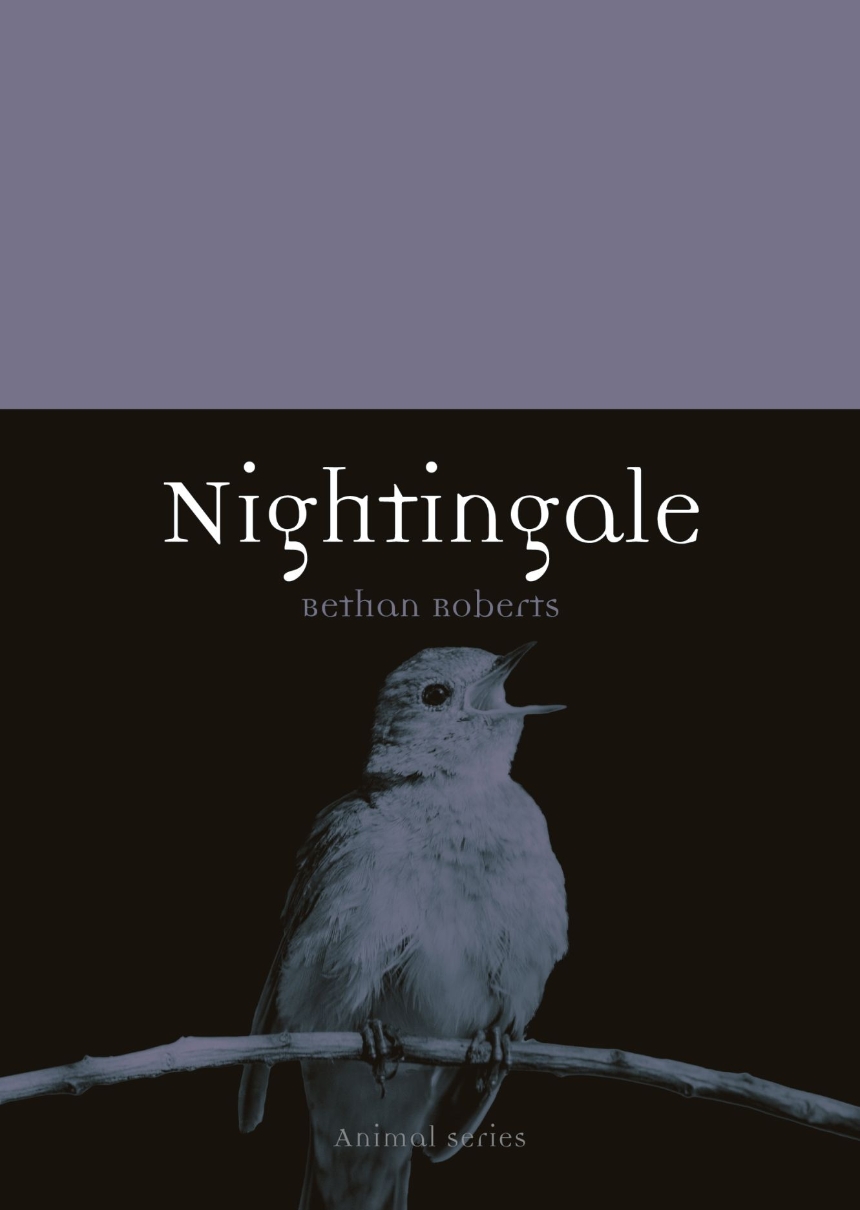 A melodious paean to the natural history and symbolic meaning of the most prized, poetized, and mythologized of songbirds.

The nightingale has a unique place in cultural history: the most prized of songbirds, it has inspired more poems than any other creature, and it is also the most mythologized of birds. Nightingale juxtaposes the bird of poetry, music, myth, and lore with the living bird of wood and scrubland, unpicking the entangled relationship between them. Covering a huge range of poets, musicians, artists, nature writers, and natural historians—from Aristotle, Keats, and Vera Lynn to Bob Dylan—Nightingale charts our fascination through history with this nondescript yet melodious little brown bird. It also documents the nightingale’s disappearance from British breeding grounds and the implications this has for nightingale conservation.

"Roberts’s Nightingale begins with a declaration that 'this book isn’t about what I think or feel.' . . . She concentrates on the common nightingale (Luscinia megarhynchos) rather than the thrush nightingale (Luscinia luscinia) or their myriad imposters. Roberts balances glee with bewilderment, asking why this 'hectic, infinitely various yell' has been a source of enchantment. . . . In her chapters on music and conservation, Roberts offers welcome critiques of Athanasius Kircher’s failure to preserve nightingale songs in formal notation and of the composer Ottorino Respighi, who called for a phonograph recording of a nightingale to conclude his tone poem of 1924, 'The Pines of Rome.' . . . Reaching after fact and reason, Roberts, who is also a scholar of Romantic literature, alights on uncertainty. 'I expected to wonder at the bird through Keats and others,' she admits, in a rare confessional aside. 'Yet, there in the green and dark, all else falls away: that moment, the song and sound, and nothing else.'"

"I’ve never seen or heard a nightingale for myself, unfortunately. Whether you’re like me or are lucky enough to hear this renowned songster every year, this new book is the perfect introduction to the bird itself and its place in literature and the arts."

"This excellent monograph... is a masterful summary of the incomparable singer's presence in poetry, literature, art, and history."

"With grace and vision, Roberts lets us hear the music and mystery of nightingales sounding across centuries and cultures. This powerfully attentive study of an astonishing bird is also a miniature history of literature and of human efforts to find words for nature. Deeply researched, lyrical, elegiac, rich with hope and vitality, this is a book for our times."

Alexandra Harris, Professorial Fellow in English at the University of Birmingham, author of "Romantic Moderns"

"Roberts’s book is lucid, exhaustive, generous, and intelligent. . . . All poets should read it. All birdwatchers should too. It reads true to the bird as well as to the long history of its human-imagined existence. To have seen what we have made of nightingales and to be able to leave us with the bird restored to itself is a great achievement."

Tim Dee, author of "Greenery" and "The Running Sky"

Nightingales are part of the Old World subfamily of chats (Saxicolinae). The nightingale, along with other chats, was formerly considered to be a member of the thrush family (Turdidae), but is now classed as of the Old World flycatcher family (Muscicapidae), in which sits the subfamily of robins and chats. While chats may be closer genetically to Old World flycatchers, their morphological and behavioural similarities to thrushes suggest a common ancestry.

In the UK, the nightingale’s stronghold breeding grounds are mostly southeast of a line drawn from the Wash to Exeter, with the highest numbers in the southeastern counties of Essex, Suffolk, Norfolk, Kent and Sussex. At the start of the twentieth century, the birds were numerous over much of southern England below this nightingale line, and along the northwestern fringe, from Devon through the West Midlands to east Yorkshire, they were present but much less numerous.3 Earlier works of natural history reveal a more extensive distribution of the bird in the North of England. Nightingales were once numerous in Yorkshire, and especially plentiful about Doncaster according to Thomas Pennant, writing in 1768. There was a minor contraction in the 1930s, although the nightingale population extended in Devon, yet by 1976 a major contraction was underway, and the population continues to shrink to a southeastern pocket.

The earliest record of the common nightingale in the UK is in Devon, from the end of the last glaciation, when the return of trees and broad-leaved forests to Britain brought about our woodland birds. Fossils suggest that nightingales arrived in Britain about 10,000 years ago. Once year-round African residents, as the ice retreated from Europe, and African temperatures increased, it seems likely that the nightingale began its migratory habit. It is thought that the distinction between the common and thrush nightingale was caused by geographical isolation during the last glacial period. The first record of the thrush nightingale in the UK is from 1911 in Fair Isle, and there were only three accepted reports before 1965, all on that island. The first record in England was at Low Hauxley, Northumberland, in September 1965. Records of thrush nightingale sightings have increased since then, reflecting the extension of the bird’s breeding range north and west. By 2015, 208 birds had been recorded in the UK. The eastern race golzii has been recorded twice in England – on the Isles of Scilly in 1987 and in Yorkshire in 1991.

The nightingale’s colourings span a spectrum of brown to white: a warm milk-chocolate brown above, with brighter russet-brown edges to the wings, rump and tail. Its buff-white underside is washed with sandy light brown to breast and flanks, while the throat is paler. The bird’s large black eyes are bordered by pale eye-rings, and it is often said to have a gentle expression. At 15–17 cm (6–7 in.), and weighing around 20 g (0.7 oz), the nightingale is slightly larger than a robin (it has a smaller head but a longer tail). The male is marginally bigger, but the sexes are otherwise alike. The juvenile is similar to the adult, although slightly duller or darker brown, with a more speckled appearance, spotted brown on the upperparts with scaling on the throat and lower flanks.

The nightingale is notoriously secretive and skulks – although less so on mainland Europe – tending to keep low, undercover and just above or on ground, making it difficult to locate. It flies at low level, no more than is essential, at short distances. The bird usually sings from deep within bushy and densely vegetated habitats, although it does venture out to sing from a branch or even rooftop (behaviour which is more widely reported, even common, in France and Spain, where the bird is known to be less shy). Its movements are similar to that of a robin, although less rapid, hopping and running alertly on long legs. The thrush nightingale is difficult to distinguish from the common nightingale. Generally, it is drabber or greyer, and less rufous in its colouring. Its chest and flanks are a mottled, dusky brown, and on well-marked birds the chest may be completely suffused brown. The wings of the thrush nightingale are also more pointed than that of a robin, and it has a marginally longer tail.

The oldest reported ringed nightingale was seven years and eleven months old, although the eighteenth-century French naturalist Georges-Louis Leclerc, Comte de Buffon, claimed that he knew a nightingale that reached the age of seventeen, growing grey and then white, and remarked that the bird never paired: ‘love seemed to abridge the period of life’.

The nightingale’s song tends to begin with a series of pure, rising, flute-like notes, before a loaded pause yields to a diverse series of phrases – rich, bubbling notes, long and short, whistles, trills, high and low, purrs, rattles, gurgles, rapid machine gunfire – separated by further pauses and marked by a loud whistling crescendo, usually rounded off with a flourish or sudden sharp note, before it all begins again. The song of the thrush nightingale is less varied: it is slower, with longer pauses between phrases. This song lacks the celebrated crescendo of the common nightingale, and is often described as drier and more mechanical, with scratchier, rattling notes and phrases.

The daytime song of the thrush nightingale is thought to be generally related to marking and defending territory, the nighttime song to attracting the female birds (paired birds sing during the night too, however). During the day, males sing from different locations within the breeding territory, in contrast to the nocturnal song, which tends to be delivered from the same place for consecutive nights. The daytime song is usually shorter and more repetitious, with less variety. The bird sings with its head held up and bill open, orange gape revealed, its body vibrating and trembling with sound. The sound of the nightingale’s song declines through May, as pairs are formed and the young are hatched: it is mostly over by the first week of June.