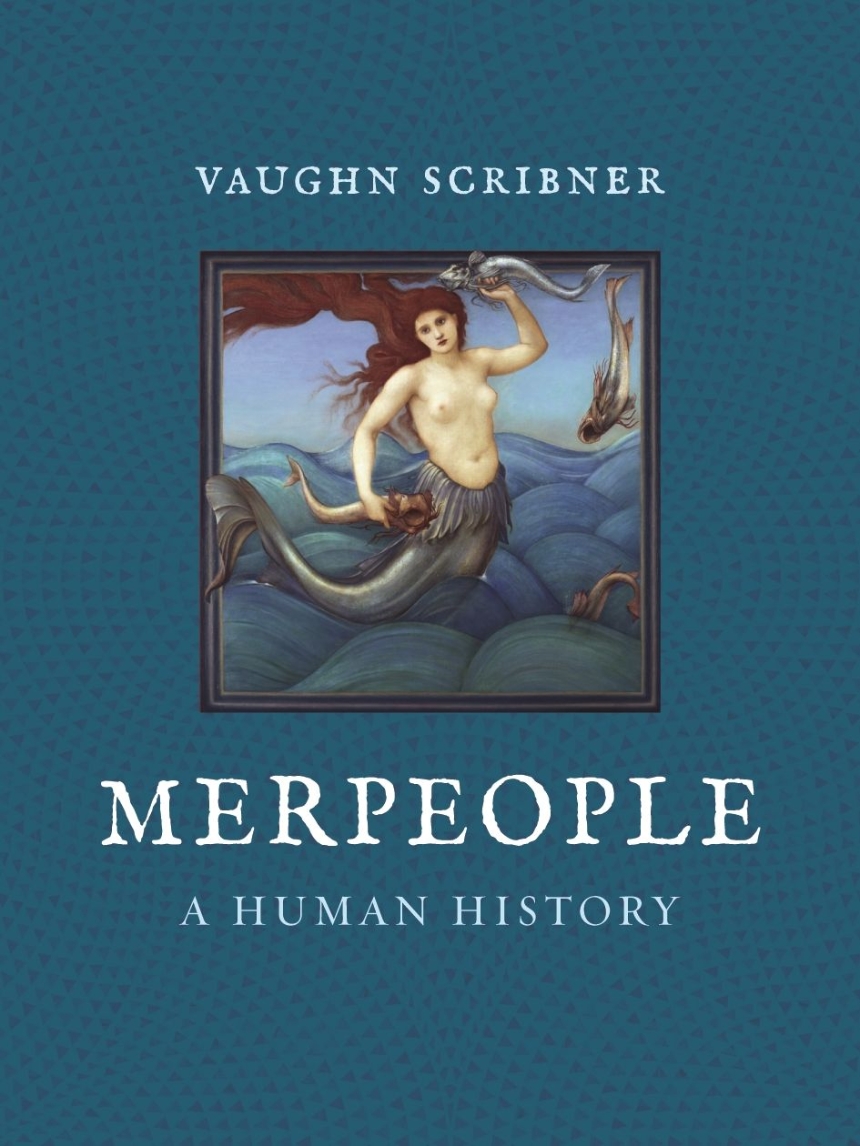 People have been fascinated by merpeople and merfolk since ancient times. From the sirens of Homer’s Odyssey to Hans Christian Andersen’s The Little Mermaid and the film Splash, myths, stories, and legends of half-human, half-fish creatures abound. In modern times “mermaiding” has gained popularity among cosplayers throughout the world. In Merpeople: A Human History, Vaughn Scribner traces the long history of mermaids and mermen, taking in a wide variety of sources and using 117 striking images. From film to philosophy, church halls to coffee houses, ancient myth to modern science, Scribner shows that mermaids and tritons are—and always have been—everywhere.

“Scribner’s book is compact, richly referenced, attractively produced, and wonderfully illustrated with more than a hundred plates, many unfamiliar (to me) and in full color. A professor at the University of Central Arkansas, he is chiefly curious about shifts in intellectual inquiry as he chronicles beliefs about mermaids, including reports of sightings, exhibitions of discovered specimens, scientists’ views, and popular cultural artifacts from films to dolls. . . . He concludes with accounts of films, advertisements, pageants, and theme parks, demonstrating growing rather than fading interest with mermaids in the present day. Yet in its revelations of the appetite for delusion among so many, even as they pursued greater understanding, it’s a tale that is especially disturbing at this time of deliberate misinformation."

"Whether you fancy a quick dip or a marathon swim, this is a delightful book to splash around in, a gloriously illustrated and meticulously researched study of our closest aquatic relatives."

"[A] comprehensive study of the fabled sea folk. . . . Scribner reminds us that merpeople are still with us, potent figures of human difference. Now, they’re connected to ideas of queer identity. And if you like your coffee from a ubiquitous American coffee chain, there might even be a cheery green mermaid on the cup you’re clutching now. Scribner doesn’t always dare to speculate as to why merpeople have always mattered to us, but his book points to a thousand curious places to find them. It’s worth a dip."

“The image of a mermaid—or, less frequently, a merman—perched on a rock, luring sailors to either danger or destiny, is weaved throughout human history. In 1493, Christopher Columbus saw what he believed to be three mermaids off the coast of the Dominican Republic. . . . This visual history plunges into the representations of merpeople throughout the ages, from Homer and Hans Christian Anderson to the 1984 film Splash.”

"As the hysteria grew, so too did people’s cynicism. Some made a point of defining mermaids explicitly as products of the ancient imagination. Others endeavoured to explain the phenomena away as seals, manatees or dugongs and the deceit of vision. It says something, however, that after reading so many historic descriptions of merpeople by those who claimed to have seen them, I came away from this book half-wondering whether there might indeed have been something more enticing out there in the deep. Like all great myths, tales of mermaids and mermen are self-perpetuating, becoming only more convincing in concert with one another. The more sources accumulate, the more weight they acquire, until there is nothing for it but to give in to the romance of the idea or else feel hard-nosed and disappointed. The greatest power of the scaly temptress, it would seem, is to tempt us into believing in her existence."

"Lusty, dangerous, pious, monstrous, thought provoking, ancient, modern. These are only a few of the ways in which merpeople can be described in Vaughn Scribner’s impressive Merpeople: A Human History. It is a noteworthy book not just for its literary content but for its beautiful plates. . . . This is a thoroughly enjoyable and scholarly read drawing on a wide variety of sources. Scribner succeeds in giving these fascinating folk the recognition they deserve."

"Besides being stuffed to the gills with amazing information, the book is a beautifully designed. . . . Merpeople: A Human History is a tremendous achievement. . . . Far from an aberrant occurrence, Scribner’s new book demonstrates that the belief in the existence of mermaids is forever buoyant, and unlikely to sink to the bottom of humanity’s imagination anytime soon."

"This is a fascinating book, a true history of human 'vision and belief', with beautiful illustrations, many in color, from a huge variety of sources. It is accessibly written with humor as well as scholarship, and with interesting material on every page. I have no hesitation in recommending this as my Fortean book of the year!"

"Merpeople is deeply researched, engaging, and beautiful, too. Tritons and mermaids, from gorgeous to grotesque, greet readers on nearly every page, illustrating the point that these creatures have shifted in appearance and in significance over the centuries. . . . Scribner has crafted an accessible and interesting entry point to more-than-human histories."

“The instant sense of recognition and familiarity when seeing an image of a mermaid or a triton is shared the world over, almost like a collective memory. Scribner takes us on a journey to explore this ongoing human obsession with these hybrid creatures at the crossroads of human and animal, of science and myth, that keep pushing the boundaries of order, wonder, and our own sense of being in the world. . . . There is so much more to explore in this book, with its vast historical overview and multitude of sources, that it provides a solid foundation for a variety of historians investigating all aspects of humanity.”

"Having researched the history of mermaids myself, I can vouch for the thoroughness of Scribner’s coverage, particularly of the nineteenth century, where he has followed up and collated a range of references from newspaper archives. He has also been magnificently served by his publishers with 117 illustrations, most in color, several of which are new to me (and I have seen a lot of merperson pictures)."

"Merpeople is a rich and rewarding read and a comprehensive and engaging addition to the merfolk corpus."

“Merpeople offers an imaginative and beautifully illustrated survey of the persistent yet mutable fascination that these compound creatures have exerted over the last few millennia.”

"Merpeople is an impressive work. It provides a thoroughly researched overview of the circulation of mermaids and mermen in various cultural contexts. Scribner's analyses are well-supported by a range of striking visual material and the book is a valuable contribution to studies of the interface between folklore and popular culture."

Philip Hayward, University of Technology Sydney, and editor of "Scaled for Success: The Internationalisation of the Mermaid"

“Scribner’s thorough, engaging, much-needed book fills an enormous gap in scholarship on mermaids. While serving as a comprehensive overview of their significance in Western culture, the book expands into examining merpeople globally, making it essential reading for anyone interested in how mermaids, or mythological creatures generally, shape and are shaped by cultures.”

Jennifer A. Kokai, Weber State University, and author of "Swim Pretty: Aquatic Spectacles and the Performance of Race, Gender, and Nature"

"Scribner’s thousand-year history of merpeople in science, religion, and popular culture offers a fascinating lens through which to view changing ideas about humanity and our relationship to nature."