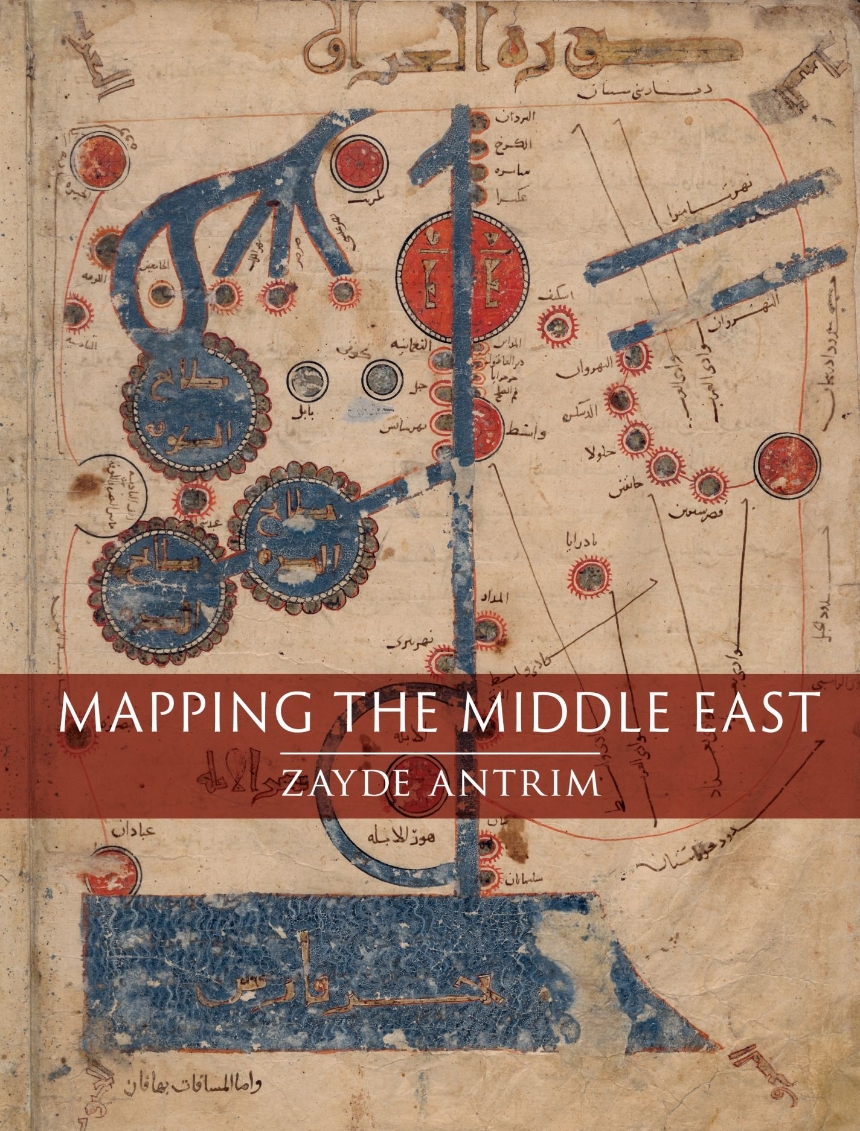 Mapping the Middle East explores the many ways people have visualized the vast area lying between the Atlantic Ocean and the Oxus and Indus River Valleys over the past millennium. By analyzing maps produced from the eleventh century on, Zayde Antrim emphasizes the deep roots of mapping in a region too often considered unexamined and unchanging before the modern period. As Antrim argues, better-known maps from the nineteenth and twentieth centuries—a period coinciding with European colonialism and the rise of the nation-state—not only obscure this rich past, but also constrain visions for the region’s future.

Organized chronologically, Mapping the Middle East addresses the medieval “Realm of Islam;” the sixteenth- to eighteenth-century Ottoman Empire; French and British colonialism through World War I; nationalism in modern Turkey, Iran, and Israel/Palestine; and alternative geographies in the twentieth and twenty-first centuries. Vivid color illustrations throughout allow readers to compare the maps themselves with Antrim’s analysis. Much more than a conventional history of cartography, Mapping the Middle East is an incisive critique of the changing relationship between maps and belonging in a dynamic world region over the past thousand years.

“In Middle Eastern studies, the history of cartography is a relatively underdeveloped field, certainly in comparison to other areas of the world. This excellent book on the history of mapping of the Middle East is a game-changer. It offers a sensible, accessible, and nuanced contextual analysis of maps of the Middle East since the early Islamic period to this day, including maps that appear in diverse media, not only the stand-alone map but also stamps, donation boxes, and art. To the best of my knowledge, no other book on the history of mapping in the region offers such an informative and informed introduction. Moreover, the author dares to cover both the premodern and modern traditions of mapping, a comparative intervention that enriches our understanding of every aspect of these maps. . . . This beautifully produced book should be of interest to a wide readership.”

“In this analysis of a millennium of cartography of the ever-changing region, Antrim provides welcome insights into the evolving function and meaning of its maps. This detailed and lavishly illustrated volume spans the ‘realm of Islam’ (eleventh to sixteenth centuries), where maps served more as memory aids than accurate geographical representation. . . . Academic yet highly readable, this book presents the history behind the maps.”

“Antrim deserves credit for tackling a difficult subject that the current political system seems unable to resolve. . . . This is an exciting book that clearly belongs in any bibliography of the Middle East, in any course syllabus on the history of cartography, and on the bookshelf of anyone interested in the lasting consequences of exploration, discovery, and nation-building.”

"This work offers a window into a fascinating subject.  It is very readable and well-compiled. It does justice to a great amount of recent researches in the history and theory of cartography. The book is incisive, beautiful, and will certainly attract readers well beyond academia."

"An accomplished starting point for approaching the region, its contested histories, and its cartographic representations through time."

"Throughout her pleasingly-written book, Antrim displays a creative, inquisitive, and eclectic mind that will content scholars and non-scholars alike. For its illustrations alone, Mapping the Middle East earns its place on library bookshelves. This certainly was the intent of the publisher, who has helped produce a narrative that will be agreeable to a non-academic audience, and that is at times almost pedagogical without, however, compromising its intellectual integrity. Moreover, this work is a visual feast, containing eighty-two gorgeous illustrations, mostly maps (evidently), as well as posters, stamps, art works, and other material artifacts. Antrim has thus produced an impressive work, both in its historical scope and in its expansive use of primary sources. . . . Mapping the Middle East also (explicitly and) effectively offers a needed alternative narrative to the Eurocentric narcissism, and implicit universalism, of many cartography studies, as well as to Eurocentric articulations of politics and culture, power and representation, and space and identity."

"Maps give the impression of being scientific, neutral, and authoritative. But beware! In this book Antrim has traced the way that maps have illustrated partisan perceptions and prejudices over the course of five centuries. She looks at the development of mapping of the Middle East from early modern times through the Ottoman years to the present. . . . Reaktion Books have presented us with a most attractive volume. The editing is excellent and the maps and illustrations beautifully reproduced."