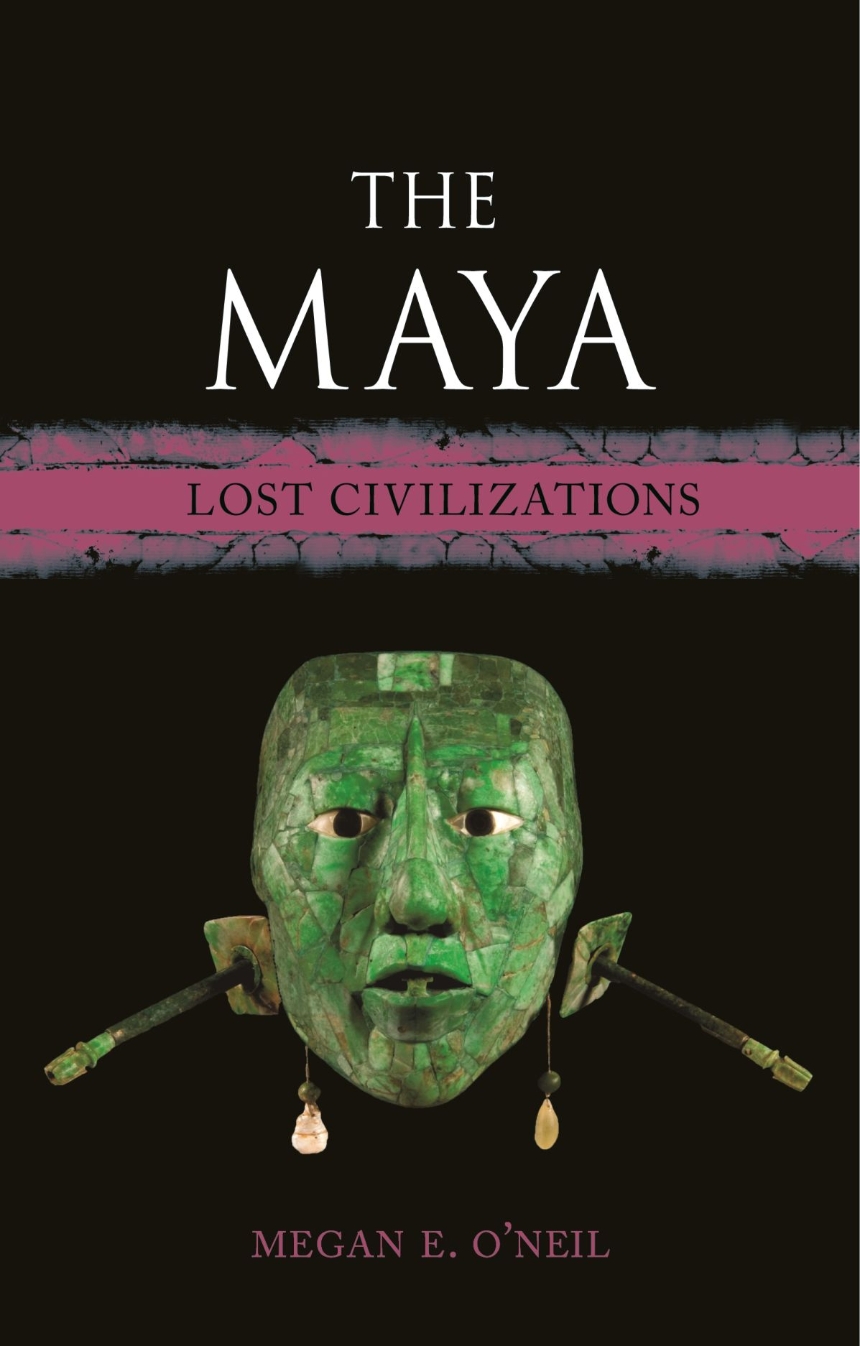 An illuminating look at the myriad communities who have engaged with the ancient Maya over the centuries.

This book reveals how the ancient Maya—and their buildings, ideas, objects, and identities—have been perceived, portrayed, and exploited over five hundred years in the Americas, Europe, and beyond.

Engaging in interdisciplinary analysis, the book summarizes ancient Maya art and history from the preclassical period to the Spanish invasion, as well as the history of outside engagement with the ancient Maya, from Spanish invaders in the sixteenth century to later explorers and archaeologists, taking in scientific literature, visual arts, architecture, world’s fairs, and Indigenous activism. It also looks at the decipherment of Maya inscriptions, Maya museum exhibitions and artists’ responses, and contemporary Maya people’s engagements with their ancestral past. Featuring the latest research, this book will interest scholars as well as general readers who wish to know more about this ancient, fascinating culture.

“O’Neil, one of the leading art historians of the Maya, has created an essential introduction to this important civilization from deep time to the present. She grounds her new perspective on the role of colonialism and portrayals in popular culture, reframing narratives about the Maya being ‘lost’ and ‘discovered.’”

"This beautifully illustrated and meticulously researched book is a wholly new, contextual study of the Maya people of Mexico and Central America. It is a groundbreaking study for several reasons. First, it does not end with the fall of the Postclassic Maya in the sixteenth century, but continues to trace Maya culture and society’s continuous evolution through the colonial period and into the present day. Additionally, it presents a richly detailed panorama of the ways that scholarly and popular audiences in Latin America and beyond have sought to collect, display, remix, and decipher the ancient Maya since the nineteenth century. The result is a thought-provoking study of how our understandings of this ancient civilization have evolved dramatically over time, and are still being constructed today."

"More than any other introduction to the Maya, O'Neil's book draws together the fascinating story of the emergence and flowering of Maya civilization with the long history of scholarly attempts to reconstruct and understand that civilization. It is written with verve and grace, but also with a profound respect for the Maya alive today and the scholars who came before."

Rex Koontz, professor of art history, University of Houston, consulting curator of the art of the Indigenous Americas, Museum of Fine Arts, Houston

"Readable and full of new ideas, this is a powerful—and distinctive—book on the Maya. Engaged at every step with Maya visual culture, this is also a book of history, anthropology, and the Maya today, one that makes strong connections between the artistic efforts of the first millennium CE and life and practice in the twentieth and twenty-first centuries."

PREFACE: A Layered Past

This book is part of Reaktion's Lost Civilizations series. The series name may evoke what many people think about the ancient Maya, but it is a misnomer, for the ancient Maya were never lost. They never vanished. They were never forgotten. Even so, details of ancient Maya life were lost. Numerous people across the centuries, from sixteenth-century European invaders to nineteenth-century explorers and contemporary archaeologists, have probed Maya sites and speculated about their origins and creators. This book explores five centuries of the history of engagement with the ancient Maya civilization, from the writings of sixteenth-century Maya scribes and Spanish conquistadors to twenty-first-century archaeological reports, museum exhibitions and Hollywood films. Addressing scientific literature, visual arts, architecture, world’s fairs, New Age religions, museum exhibitions and Indigenous activism, this book aims to examine how the ancient Maya – and their buildings, ideas, objects and identities – have been perceived, portrayed and used over time in the United States, Europe, Mexico and Central America.

Although some people may ask questions such as ‘Where did the ancient Maya come from, and why did they disappear?’, we know that Maya civilization was an autochthonous civilization in the Americas. Furthermore, we know that although the ancient Maya experienced several major collapses of large-scale political organization in antiquity, Maya people kept reorganizing and migrating, and never disappeared. Even after sites were abandoned, whether after the second-century ce Preclassic collapse, the ninth-century collapse in the Southern Lowlands or the sixteenth-century and later Spanish conquests of Maya kingdoms, Maya people persisted, moving into the future but also looking back to the past, visiting those abandoned sites, where they would perform rituals and leave offerings in them, and even show the places to newcomers.

One theme that arises repeatedly in the history of engagements with the ancient Maya is the speculation that the people who built Maya cities had migrated from other places, such as Greece, Egypt, the legendary lost island of Atlantis or outer space. In light of today’s definitive proof that ancient Maya cities were built by Maya people and resulted from independent cultural development in the Americas, many of these far-fetched migration tales seem surprising. But we must remember that many such stories were created long ago, within limited worldviews and with inadequate evidence. Indeed, there was little to no archaeological work demonstrating the development of early civilizations in the Americas until the middle of the twentieth century, and the Maya inscriptions were not deciphered until about fifty years ago, leaving much open to speculation in earlier centuries. But at the same time, many such stories were formed within a mindset of wilful myopia and misinterpretation, blindness to contrary evidence, uncritical and selective approaches, and the creation and use of falsified evidence. Questions of race are also at play, as the speculations omit or suppress the involvement of Indigenous Americans in building sophisticated civilizations, divorcing contemporary Maya people from their ancestors’ legacies and connecting other world populations to those legacies instead. Moreover, there are people who continue to subscribe to such theories, despite the preponderance of evidence that discredits them.

Another major theme is the rediscovery of a ‘lost’ civilization that collapsed or disappeared centuries ago and awaited discovery by valiant explorers. Indeed, there has been a persistent rhetoric of personal discovery surrounding the ancient Maya. It is true that many Maya ruins were abandoned and lost to all memory, covered in soil and vegetation and forgotten over the centuries. But other places remained as sites of visitation by Maya people and were maintained within social memory. Furthermore, although Spanish conquistadors and friars tried to obliterate Maya writing and religion, Maya culture, religion and languages endured, and millions of Maya people continue to speak Mayan languages and practise rites similar to those of their ancestors.

When foreign explorers entered Maya regions in the centuries after Europeans arrived in the Americas, local people often knew of the ancient cities and even revealed their locations to explorers. They were collaborators in gaining and disseminating knowledge of those places, yet the rhetoric of exploration and discovery makes it seem that it is always the outsiders who ‘discover’ ruins and monuments when they assign a name or publicize a place. Although this book focuses on those outsider histories, it attempts to balance them with Indigenous histories, knowledge and agency. Indeed, this book explores myriad ways of engaging with the ancient Maya by diverse groups of people, including contemporary Maya people. An enduring heritage of languages, religion and other types of knowledge has been essential to modern reconstructions of ancient knowledge systems, including ancient Maya writing. Because of the integration of this wisdom with other forms of inquiry, such as archaeology and epigraphy (the deciphering of writing), we can now read the names of Maya ancestors and the histories of their actions as written in their own words.

In the lead-up to the year 2012, which coincided with the end and beginning of a major cycle of the Maya calendar, American popular culture was awash with curiosity about – or concerns over – the concept of a Maya-predicted apocalypse. Many people thought the Maya calendar was scheduled to end, but this was not true. The Maya calendar is infinitely more flexible and interesting, involving complex mathematics and enormous cycles of time that allowed the ancient Maya to record and celebrate historical events and contextualize them within cycles spanning millions of years. As opposed to being distracted by sensationalized stories such as those relating to 2012, perhaps more people will realize that the ancient Maya are a significant world civilization deserving of attention and study, both because of their major accomplishments in the past and because millions of the descendants of ancient Maya kings, queens, artists, labourers and farmers continue to live and thrive not only in their ancestral homelands but in many countries of the world today.

ONE: Art and Architecture

The civilization called the ‘ancient Maya’ or ‘Classic-period Maya’ was composed of loosely affiliated political entities that occupied many sites throughout southern Mexico and Central America for centuries. This civilization was diverse and complex, covering a large geographical region and temporal expanse, with several periods of florescence. But their world was forever transformed by the arrival in the sixteenth century of Spanish invaders, at first on the shores of the Yucatan Peninsula, in present-day Mexico. The primary subject of this book begins at that moment, considering how people have looked back at the ancient Maya civilization and endeavoured to experience, understand, frame or appropriate the culture or its artistic and architectural wonders. To help the reader appreciate these attempts at understanding, the first two chapters provide a general introduction to the ancient Maya. Nonetheless, because of the quantity and diversity of ancient Maya sites and their lengthy occupations, during which art, architecture, history and politics varied significantly, it is impossible to address here every important archaeological site or artwork, or to cover all levels of Maya society or the environmental and social conditions that enabled the ancient Maya florescence. Instead, these introductory chapters paint a picture with broad brushstrokes of the overall regions and histories, and give more detailed insight into selected artworks, places and individuals.

When Spaniards arrived in the region that is today called Mexico and Central America, in the early sixteenth century, there were thriving Maya communities and kingdoms in the Yucatan Peninsula, Chiapas, Belize and Guatemala. The people we call ‘Maya’ were not a unified group but considered themselves as distinct families, communities or political entities. In Yucatan, the bases of political organization were the cah (plural cahob), which was a community or geographical entity, and the chibal (plural chibalob), correlating with an extended family, patronymic group or lineage. Some chibalob in the Yucatan Peninsula were the Cocom in Sotuta, the Pech in Campeche and the Xiu in Mani. Politically separate, they were variously in alliance or conflict. Distinct kingdoms, including the K’iche’ and the Kaqchikel, held sway in highland Guatemala and also engaged with and competed
against one another, both before and after the Spanish Invasion.

Indeed, the people today called ‘Maya’ did not perceive a shared ethnic identity in the sixteenth century or before European arrival. But the Spaniards categorized them, along with other Indigenous Americans, as a group, as indios (Indians). The term ‘Maya’ was used in colonial Mayan-language sources but concerned references to Mayan languages. The use of the cultural category ‘Maya’ has developed over time, beginning in the colonial period and continuing during the nineteenth-century Caste Wars and in the context of twentieth-century ethnopolitics. Academic and popular attention to the ancient Maya has also contributed to creating this cultural category, and the pan-Maya movement of the late twentieth and twenty-first centuries reified this broader categorization. Even so, there is great diversity of language and culture of Maya people across Mexico and Central America, with more than 5 million people speaking about thirty Mayan languages. These diverse people speak other languages too, and live in their ancestral homelands and in diaspora in other regions of Mexico, the United States, Canada, Europe and beyond.